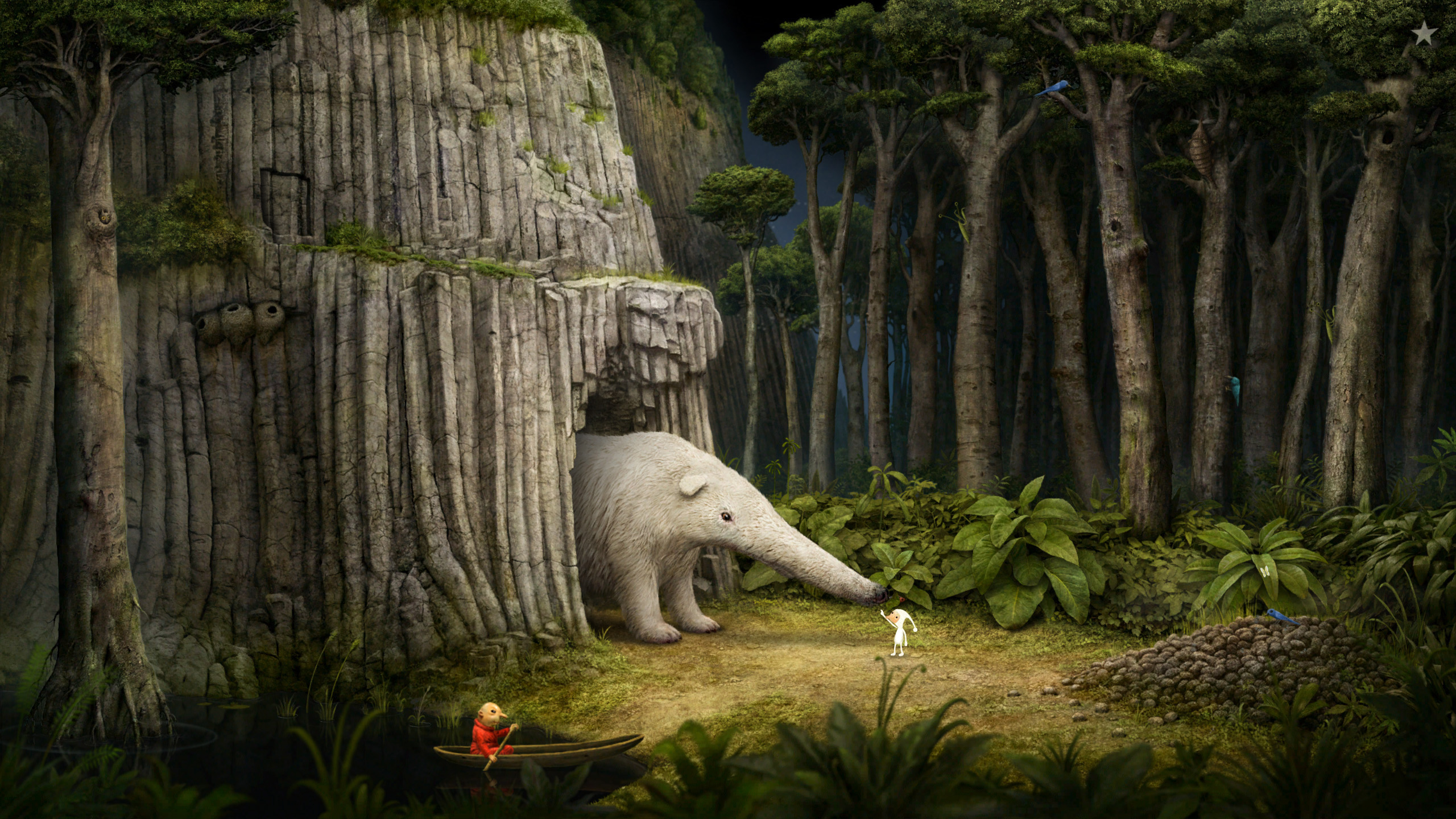 Video games have gone from a niche product to a mass phenomenon in a very short time. An exhibition at the Museum für Gestaltung Zürich offers insights into this vibrant field of design. Curators Maike Thies and Damian Fopp discuss paradises, stigmas and a booming industry.

Who will clean up the mess we humans will leave behind on planet Earth? This question is sparking outrage and making people take to the streets. An exhibition at the Museum für Gestaltung Zürich offers visitors an opportunity to playfully exercise damage control. Titled “Game Design Today,” the show presents a comprehensive view of contemporary video game culture. Exhibits include “Terra Nil” by the South African studio Free Lives. This game applies the mechanics of a building strategy game, but stands them on their head: it starts in a polluted desert devoid of living creatures. The aim is to grow grasses, bushes, trees, use wind energy, achieve climate neutrality, make the soil fertile and get animals to return to their natural habitat. And eventually to disappear in a futuristic flying object. What remains is an ideal world in its original, paradisiacal state.

“Games are still fighting various stigmas today that have long ceased having a basis in reality,” says Damian Fopp, the responsible senior curator at the Museum für Gestaltung Zürich. He has conceived “Game Design Today” together with Maike Thies, a research assistant in ZHdK’s subject area Game Design. The exhibition, so the curators, seeks to make games visible as a cultural asset, as a creative achievement of artists and designers. The exhibition space recalls a white cube rather than an arcade. Visitors search for crisps and sofas in vain, but are expressly invited to play games, thus potentially overcoming one or two preconceptions. For example, that games only serve as entertainment, are addictive or promote violence. The exhibition also showcases the highly diverse areas in which video games are used, and how they address social issues such as diversity, climate change, migration, and the interface between humans and technology.

The subject area Game Design also researches and develops “Serious & Applied Games.” These include games for rehabilitative, therapeutic or educational purposes, among others. One example is “Gabarello.” This game is intended to motivate patients with walking difficulties to practise walking in a gait orthosis. Motivation is crucial, especially with children, who often struggle to actively participate in therapy. Evidence shows that “Gabarello” positively impacts therapy. Thies says: “The basic concept of these projects is an iterative design process that aims to optimize a user’s product experience, that is, therapy sessions. This brings research and design into an exciting relationship.” Designed by ZHdK spin-off Sphery AG, the movement-based game “ExerCube” is also part of the exhibition and a success story. This game sometimes produces even better workout results than ones supervised by a personal trainer: its sophisticated calibration and tracking system requires players to very accurately execute movements to score points.

“The last century was dominated by the rise of film. The current one will be dominated by virtual worlds. Games have long outgrown the pixel aesthetics of Pac-Man and Tetris. Yet, in terms of art history, this medium is still in its infancy,” says Damian Fopp, who wants to bring more digital design fields into the museum context. While large companies like Warner Bros. Interactive Entertainment produce games guaranteeing blockbuster status, a broad field has emerged in parallel for indie developers, who also dominate the local scene, he says. “Smaller studios are taking more risks, bringing more interesting content to games. Even single-person operations can develop minigames for phones. Sales channels are democratized, which allows for a plurality of voices,” adds Fopp. This polyphony is on display at the Museum für Gestaltung Zürich. Instead of a historical perspective, the exhibition focuses on today’s game industry, whose 2021 revenue overtook that of the music and film industries.

We need to discuss funding

Game design involves comparable development budgets to film-making and a similarly sophisticated creative process: from the idea through conceptualization and research to technical implementation. But the Swiss scene faces financing problems. Maike Thies says: “Currently, financial support in Switzerland is only provided by the Swiss Arts Council Pro Helvetia. Over the past ten years, its various funding programmes have been helping to ensure that games attract greater public attention, primarily as a cultural asset, but also as a potential economic factor. With ‘Swiss Games,’ a brand has emerged that is also attracting a great deal of interest internationally.”

This brand is characterized by a balanced gender ratio in design teams, agile cooperation, an artistic signature and the increasingly frequent social relevance of games. What is needed, however, is solid funding: “You don’t,” says Thies, “create a boom with small financial injections. This creative field is forced to work at the breadline. It’s time for politics and business to realize that the Swiss games scene has a lot to offer and to take a clear stance on funding.” Besides insufficient financial support, its lack of visibility is besetting the scene: “Barely any journalists are covering Swiss game developers anymore. Some key figures are known, but over a hundred studios are active in the field of games and immersive technologies across Switzerland.”

A place for special games

At ZHdK, Game Design is part of the Department of Design and stands out from other programmes due to its more technical profile. The bachelor’s programme is a generalist course. The modular curriculum enables students to engage in all work processes, which gives them the greatest possible flexibility in their later professional lives. “Our bachelor’s programme is a sheltered space where students can let their ideas run wild, as well as contribute, deepen and expand their skills.” Thies mentions ZHdK alumnus Mario von Rickenbach, whose game “Rakete” is now part of the ZKM collection in Karlsruhe, yet not oriented towards the classical game industry. “Such ventures — that is, games more concerned with experimental questions and artistic approaches — also need a place to develop and thrive. If students had to confine themselves to projects guaranteeing commercial success, we would lose a lot of what makes the Swiss scene so special and unique. In my opinion, it’s vital to promote these gems, which are subject to other commercial mechanisms.”

Game design students’ skills are also increasingly sought after in other artistic fields. Thies observes: “Game designers are suddenly working together with filmmakers and theatre professionals. This is no longer an issue abroad, but we still need to do some persuading here in Switzerland. Our exhibition and its accompanying public programme are trying to inspire a broad audience to engage with the game sector and its artistic potential. And perhaps to contribute to giving the Swiss scene an economic basis beyond cultural funding — so that that the field can draw breath, grow and also increasingly radiate abroad.”