“Studying was a break from everyday life” 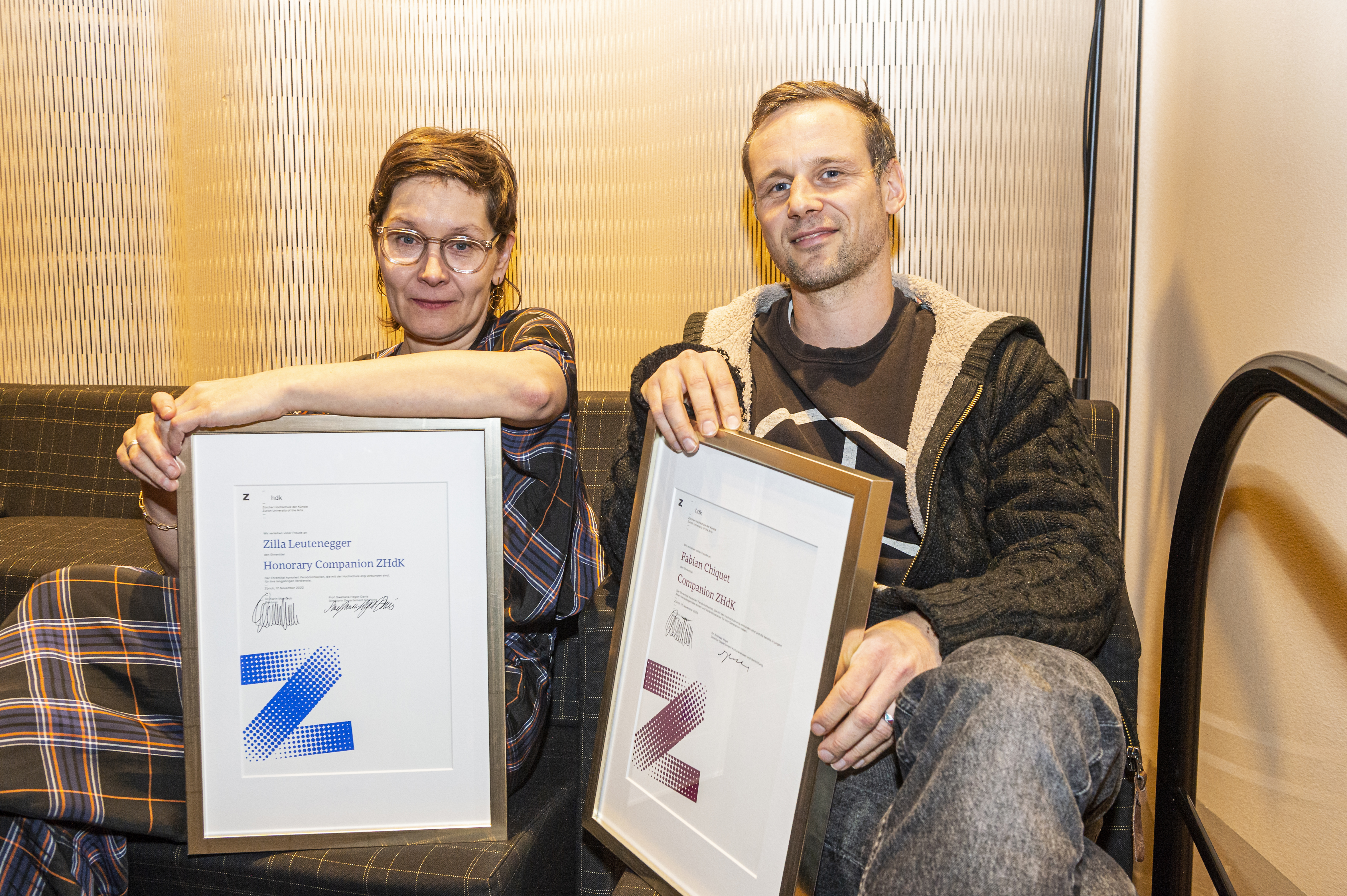 Zilla Leutenegger and Fabian Chiquet were awarded the ZHdK Honorary Prize at the University Day. A conversation about failure, new projects and whether one can learn to make art.

Fabian, you create music, theatre, films, art: What does transdisciplinary work mean to you?
Fabian Chiquet: Above all, it means great variety. My grandfather once said he was a professional dilettante, an idea I can identify quite well with. I often see things and think: “Wow, I’d like to do that too.” Then I just try, even though I know that I might fail. It’s a sort of survival strategy: the longer I work in different disciplines, the better I get, and the less I depend on things working out in one particular area.

What do you remember particularly well about your studies?
Zilla Leutenegger: For me, studying was a break from everyday life. I came to ZHdK from the professional world and first had to get used to the fact that I was no longer being told what to do. I was on my own and first had to understand this.

Fabian Chiquet: My latent guilty conscience — because my mind was often somewhere else during my studies. I was up to my knees in projects that I thought were very important and that kept me from benefitting from my studies as much as I could have. What I really enjoyed at ZHdK was working with people from a wide range of disciplines. I got a lot out of that.

Zilla, how can you best express yourself (at the moment)?
Zilla Leutenegger: It is and always has been drawing. Mind you, my installations also involve working with many different media. I want my art to stimulate viewers and that every work makes an authentic statement.

Can one learn to make art?
Zilla Leutenegger: You can’t study how to make art. But I think it’s important that studying gives you time to think about what it means to take responsibility. That you learn to deal with not knowing where you’re going. At ZHdK I learned to work independently, to make decisions and to trust my own actions. In other words, what might also be called making art.

Fabian Chiquet: Well, yes, to the extent that you learn to deal with the systems and thought patterns awaiting you “in the marketplace.” And you can obviously learn artistic practices and techniques. But no school can teach you how to touch other people with your work.

How has your work changed since you left ZHdK?
Fabian Chiquet: I used to be very interested in pop culture and the principles governing it. Today, I’m more interested in the stories of the people behind it. For me, this also means a very general interest in what makes people do things. Be it self-realization in the form of music or the desire to improve the world as a peace activist. The documentary, collecting memories and people’s memory gaps are much more important in my work today.

What are you working on?
Fabian Chiquet: I’m working on a project about the pioneers of Swiss pop music. Over the last five years, we have interviewed musicians from the 1950s to the 70s (our oldest interviewee is 96), written songs with them, founded a band and played concerts. The result is a documentary film series and a podcast. I’m also working on a documentary film about Edith Ballantyne, the icon of the women’s peace movement, now a hundred years old and still very much alive.

Once a year, ZHdK awards the titles “ZHdK Honorary Companion” for many years of service and “ZHdK Companion” for outstanding achievements at a young age. The ZHdK honorary titles are not tied to any financial support. ZHdK staff and students may propose people for the awards. The University Board decides on allocating these titles, assisted by an advisory committee.
Tessa Apitz (post@tessa-apitz.de) is a freelance writer, concept developer and communication strategist based in Berlin.
Teile diesen Beitrag: