There is no “this is how it is done” 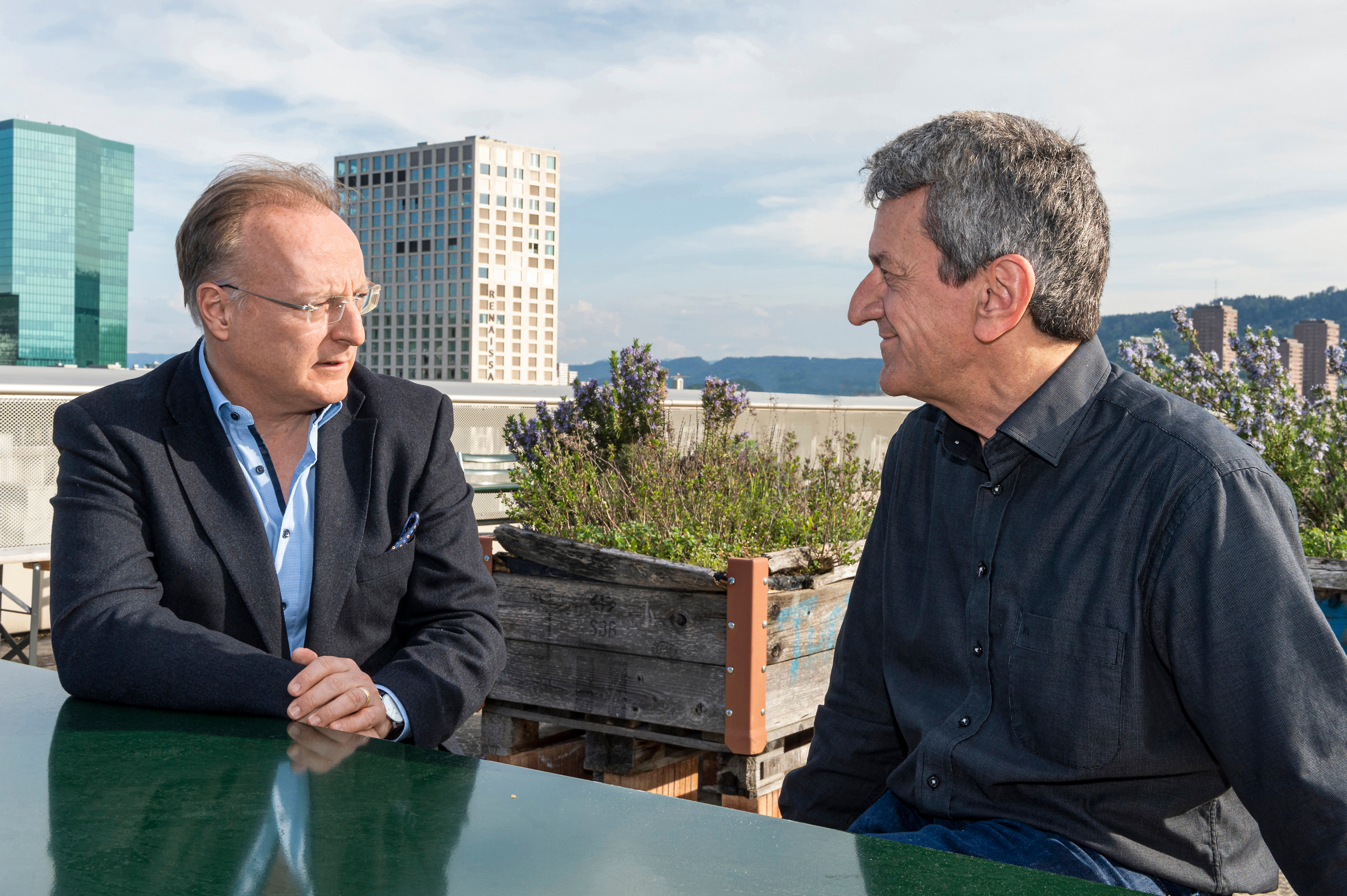 Will be teaching together for one year: Christoph-Mathias Mueller (left) will succeed Prof. Johannes Schlaefli from August 2022. Photograph: Johannes Dietschi © ZHdK

ZHdK’s conducting class has an outstanding reputation. The stellar careers of its graduates have made Johannes Schlaefli a successful and sought-after conducting teacher with his “Conductors Studio ZHdK” training model. Now, after over twenty years, he is passing on the baton to Christoph-Mathias Mueller. They met to discuss style, success and the role of diversity in conducting.

Johannes Schlaefli: I still remember our first meeting when you were playing in the Serenata, the predecessor of Basel Chamber Orchestra. I had just finished my training. You were still a student, a youngster, and were playing second violin.

Christoph-Mathias Mueller: Really? I was always a committed performer, very intense, with lots of movement. (laughs) I remember you inviting me to your dress rehearsal with the Zurich Academic Orchestra. You asked me to place myself at the conductor’s stand because you wanted to check the acoustics. Then I heard a crescendo and a boom — what a mass of sound! I thought: this is it!

Schlaefli: So it’s my fault that you became a conductor. (laughs)

Mueller: Almost. I need to thank you for what was a formative experience. Now we’re meeting again, which is really nice. I long believed that I wouldn’t have anything to do with Switzerland again — until I became artistic director of Murten Classics in 2020. And that’s when I invited you as a conductor.

Schlaefli: When the question about my successor arose, I never had you on my radar because you hadn’t pursued a career as a conducting teacher. But after we talked in Murten, I thought: Christoph might have a nose for what we need here.

Mueller: I hope so. (laughs) I come from a family of teachers. Pedagogy always played a major role at home, but I never thought primarily about teaching at an institution. Talking to you, I realized that we think similarly about what attributes a young conductor needs, what we want to teach and what not. For example, that there is no set pattern, no template that fits all students.

Schlaefli: Exactly. There’s no “this is how it is done.” All these rules and regulations are nonsensical. There is no particular system and no particular technique. Mind you, certain aspects need to have the right energy. It was crucial to me that you see this the same way. There are enough conducting classes that are proud of their technique. I remember that to begin with I also emulated that approach. Now I see it as a compliment when someone says: “Your students conduct totally differently.”

Mueller: I had a very classical, bandmaster-like education in America. That’s not bad as a foundation, but occasionally there was a lack of musical expression. You do things differently and are successful with the “Conductors Studio ZHdK” because you enable students to convey their own ideas.

Schlaefli: I want to give students space to test themselves. At the same time, classroom work is very intensive. They learn to see and understand the differences. The more we do together, the more different we become. That sounds paradoxical but it’s really like that.

Mueller: When I watch your students, I don’t think for a second whether a man or a woman is conducting. It simply doesn’t matter. Because you’re interested in people and don’t approach students with stifling, preconceived ideas.

Schlaefli: That point also struck me in the recruitment process: some applicants said, “Of course I have nothing against women, they just need to be good.” Anyone who says that has failed to understand a quintessential point: our assessment criteria are based on observation — most likely on observing male conductors 98 per cent of the time. When I see an unfamiliar movement in a student, I might not like it right away. So I ask myself: is that because it’s new or because it’s actually not that good? Often I have to say: yes, it also works that way.

Mueller: I’m really looking forward to teaching! I’m also excited to see how things will work out with my guest conductorships. It’s important that they continue because staying connected to professional life is important.

Schlaefli: We’re always looking for orchestras that are interested in working with the conducting class. Your contacts will prove valuable in that respect. As a long-standing music director in Germany and other countries, you are so well-connected. But the crucial point is that we have complete faith in you.

Mueller: I’m very grateful that we’ll be spending some time teaching together. Usually, the outgoing professor works with students until graduation and the successor only teaches the new entrants.

Schlaefli: I always said: if we find someone who gives me a good feeling, I want to teach together for a year. And then we found you and I really wanted to continue. I’m really looking forward to the year. I’ve done a lot on my own so far. It’s nice that I can now share what I’ve planted in my little garden with you.

Prof. Johannes Schlaefli (johannes.schlaefli@zhdk.ch) is professor of orchestral conducting at ZHdK and principal conductor of the Collegium Musicum Basel Symphony Orchestra. He will teach the conducting class together with Christoph-Mathias Mueller until the end of the academic year 2022/2023.
Prof. Christoph-Mathias Mueller (christophmathias.mueller@zhdk.ch) will be professor of orchestral conducting at ZHdK from August 2022.
ZHdK’s conducting programme enjoys an exceptional international reputation. Many ZHdK students and alumni – including a striking number of women – have been extremely successful in this highly competitive market. The “Conductors Studio ZHdK“’s learning culture promotes an intensive dialogue among a wide variety of students through curricular activities and different learning formats.
Lea Dahinden was a project manager at ZHdK University Communications.
Teile diesen Beitrag: