Take courage, all will be well! 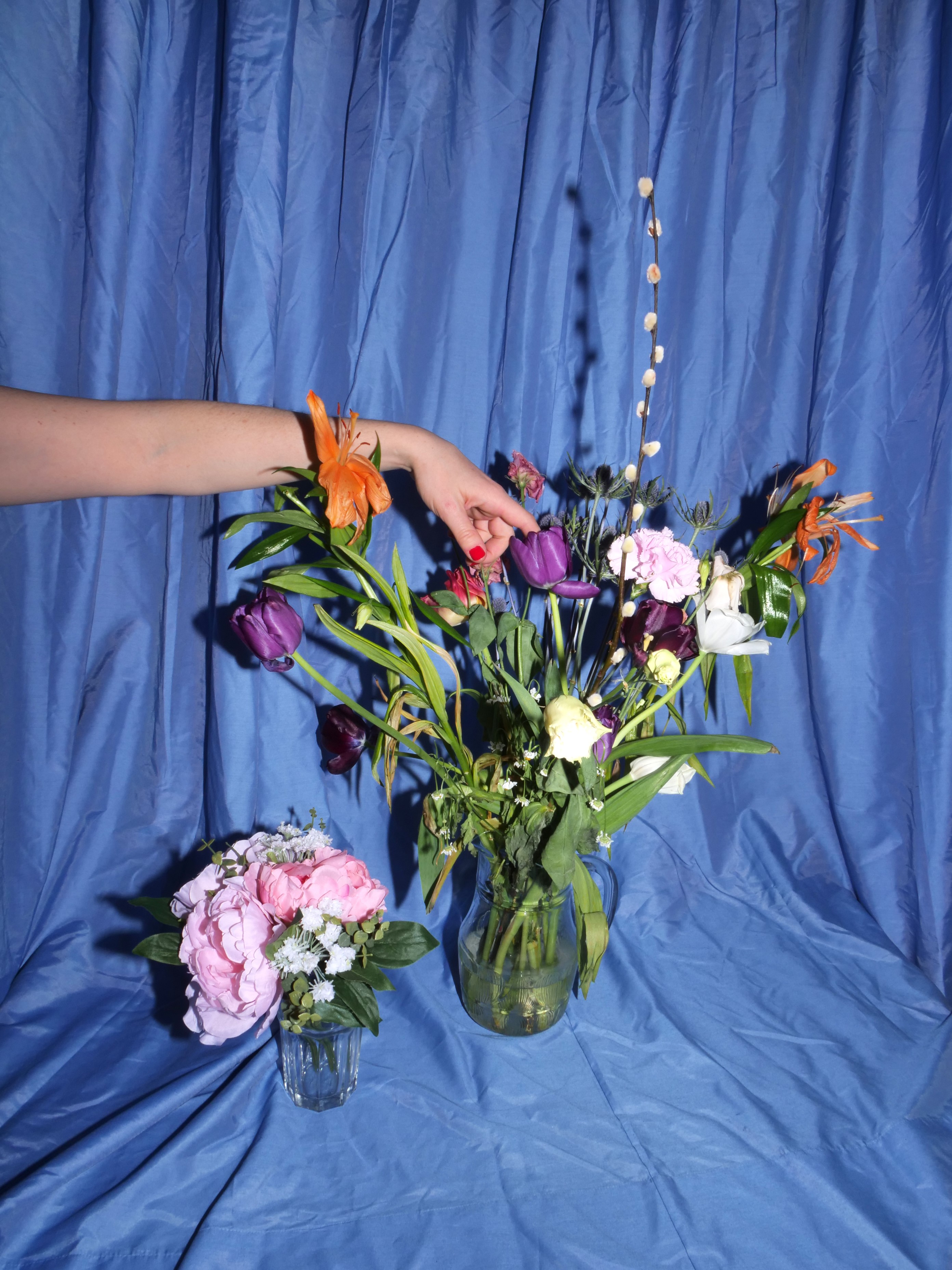 Allowing ideas to blossom: from the production “Bereit oder nicht – hier komme ich” (2020) by the “wildi blaatere” network. The theatre network was funded by the Z-Kubator in 2021 as part of the “What’s next_Project” and aims to develop sustainable and fair cooperation between theatre professionals. Photograph: Chloé Bourgogne

Take courage, all will be well! The Z-Kubator promotes those courageous enough to take matters into their hands like the theatre network “wildi blaatere”. Photograph: Chloé Bourgogne 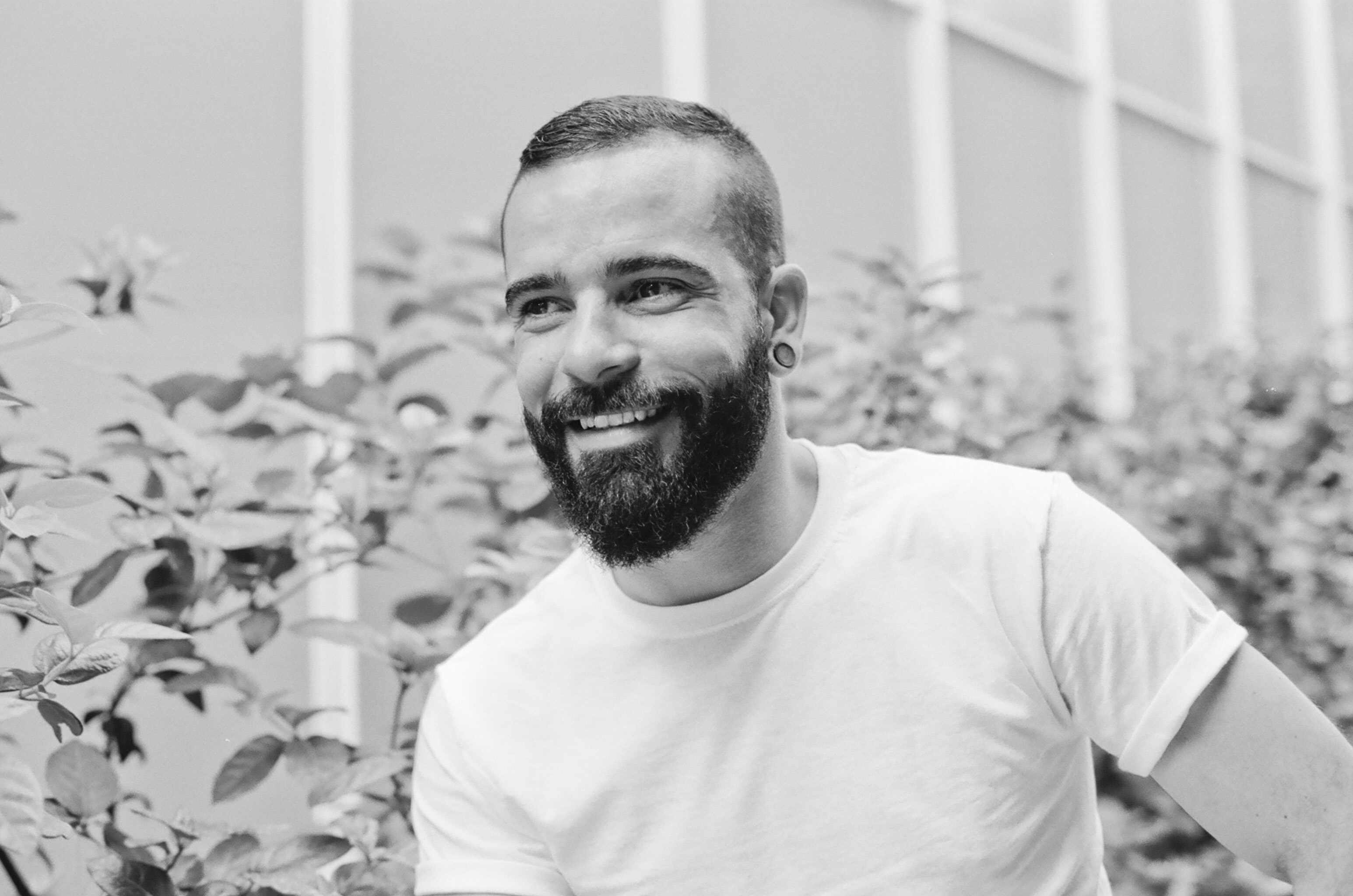 Itay Blaish, an Israeli now living in Zurich, studied visual communication at ZHdK and is participating in the “What’s next_Studio” programme until August 2022. “The Z-Kubator programme allows me to network more with the Zurich art scene,” says Blaish. Photograph: Merav Ben Loulou 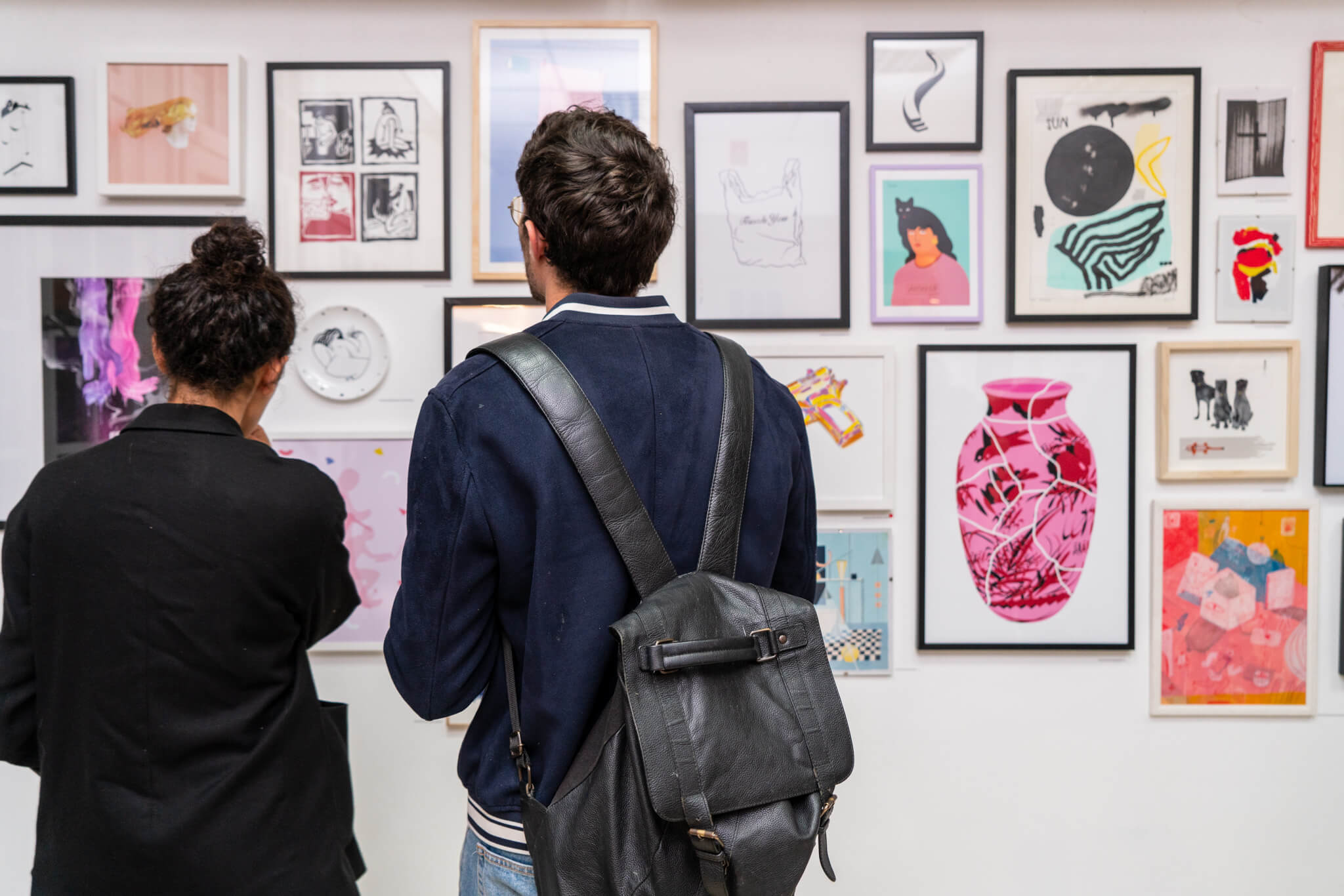 “My practice focuses on the seams between visual communication, visual art and curating,” says Blaish. In 2012, he launched the art initiative “LaCultureTLV” in Israel, and in 2019 the exhibition “Object / Spirit” was held within this framework. Photograph: Naama Segal 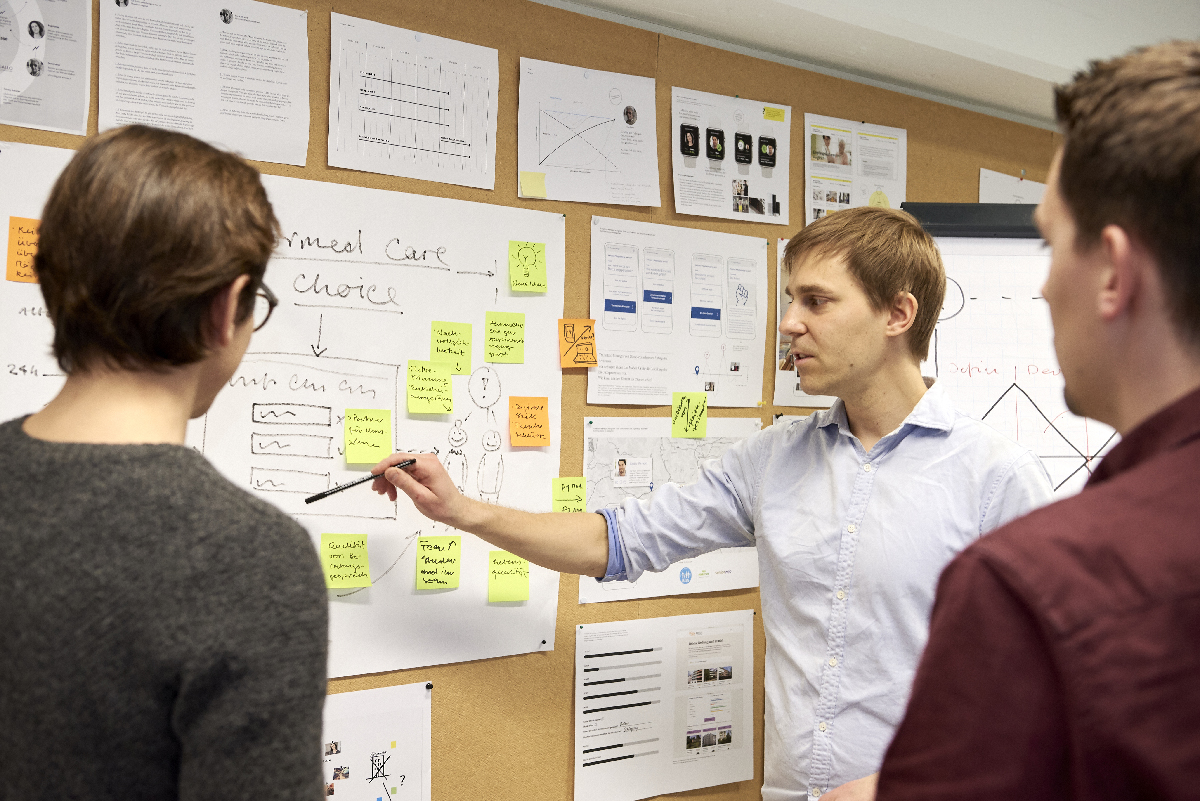 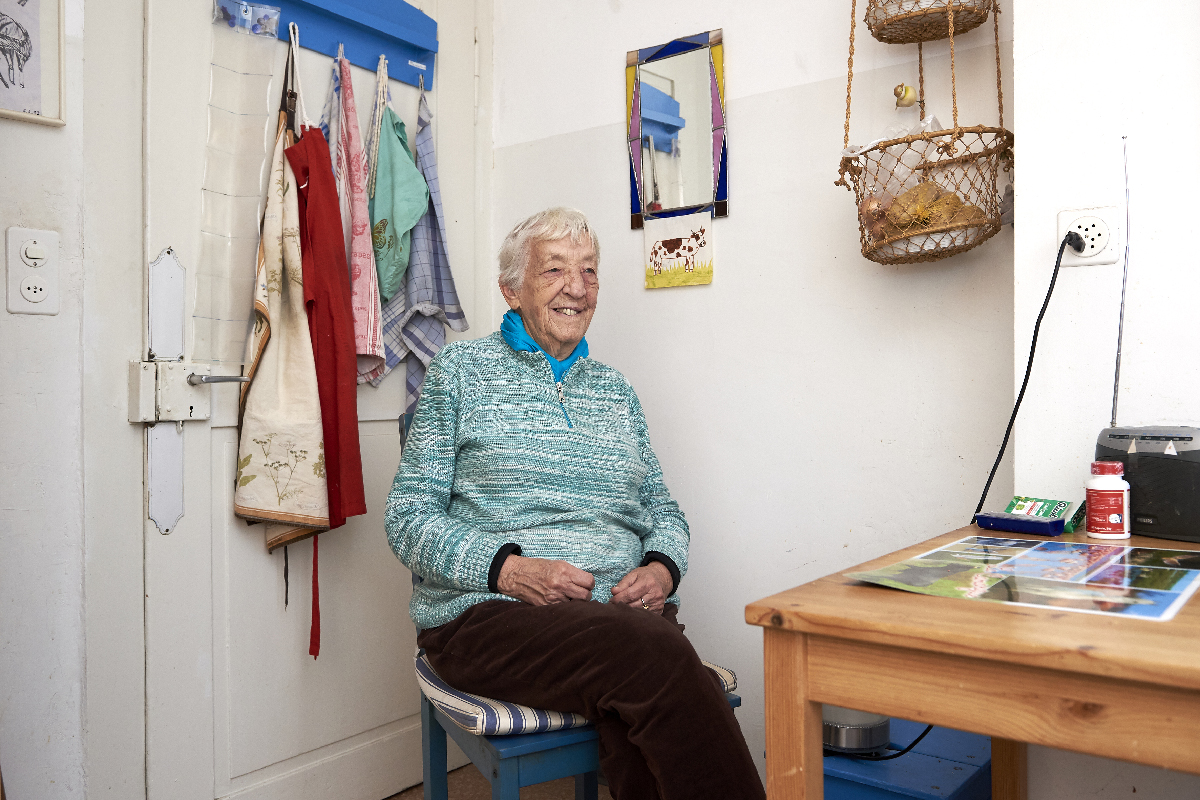 Zahler, a graduate of the Master in Product Design, dedicates his research to today’s ageing society and looks for design-oriented solutions to improve elderly people’s quality of life. Photograph: AgeLab

“I remember not being able to find a job after graduating in 2018 and it felt like a defeat. So I applied for the ‘What’s next_Studio’ programme, which gave me a solid base and ...” Photograph: Raphaëlle Müller 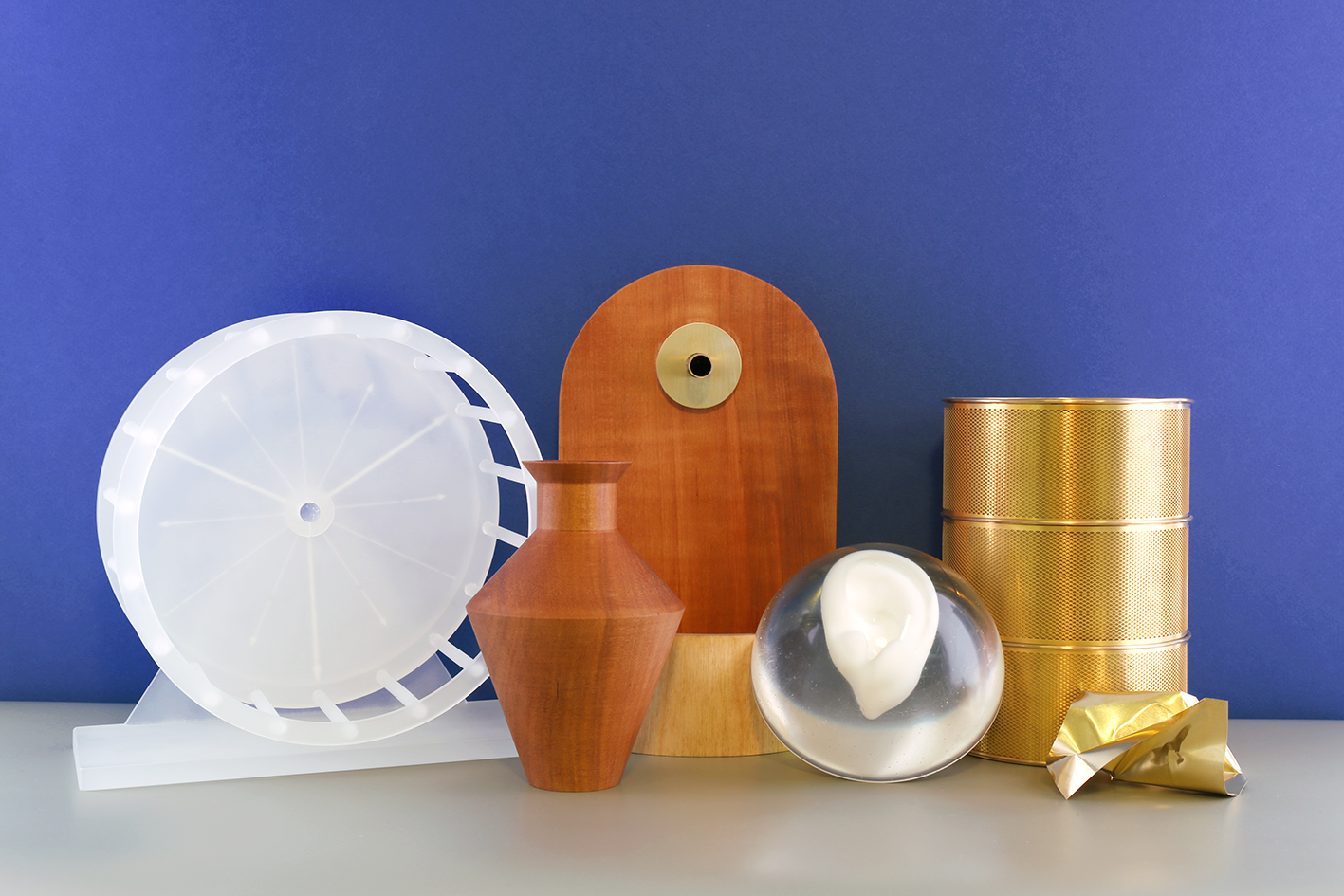 What awaits me after graduation? The answer to this question is as individual as it is uncertain. What is certain at Zurich University of the Arts, however, is that those who need support receive it: the Z-Kubator sheds light on the darkness and helps graduates confidently take a leap of faith into their career.

And suddenly they’re over, your studies. Your backpack is full, brimming with knowledge and experience. You’ve tried (out) lots. You failed, got up again, moved on. You’ve grown. And now? Some graduates stay on and climb the academic ladder a little further. Others plunge into the working world, eager to put their ideas into practice. That takes a lot of courage and self-confidence: the danger of failure is real. The Z-Kubator enables taking the plunge without sinking. With its support, graduates confidently begin swimming. The ZHdK Advisory and Support Office is open to all university members. The Office supports graduates for up to two years after graduation. “We support them at the interface between artistic or creative ideas on the one hand and entrepreneurship on the other,” explains Philipp Kotsopoulos, head of the Z-Kubator. “We do so by bringing in an entrepreneurial and economic perspective and by helping university members develop projects and become self-employed.” This can mean establishing oneself as a self-employed artist or designer. But it also includes all those who want to start their own business. “Our various programmes address these different needs.”

Focus on coaching and support

Since 2019, the Z-Kubator has been part of the Zurich Centre for Creative Economies (ZCCE). Besides offering support and teaching, the ZCCE also focuses on research and transfer projects in the context of the creative economies. The Z-Kubator has now existed for over five years. Essentially, its offerings fall into three categories: during their studies, students, but also other members of ZHdK, can take advantage of individual consultations and use these to further develop their ideas and projects. After graduation, the Z-Kubator offers two support programmes. The first is the studio programme “What’s next_Studio.” Aided by the City of Zurich, artists are provided affordable studio space and can continuing accessing the infrastructure at the Toni-Areal. The second programme, “What’s next_Project,” supports entrepreneurial projects. Sponsored by Zürcher Kantonalbank, projects are each funded with 20,000 Swiss francs. Both programmes run for 12 months, during which participants also benefit from mentoring, coaching, workshops and networking opportunities. The Z-Kubator also offers a summer school for Bachelor’s and Master’s students. As of 2023, the Z-Kubator’s course offerings will be developed into a minor in project development and entrepreneurship. The public event series “Z-Kubator invites” and various partner programmes and cooperations complement the Z-Kubator’s offerings.

In the studio programme around 15 studio places can be allocated every year. The “What’s next_Project” funds three projects a year and provides regular support. Selection criteria vary. For the studio programme, the jury focuses on artistic independence while innovative ideas are central to “What’s next_Project.” “We also review applicants’ potential and how implementable their ideas are,” says the head of the Z-Kubator. As we all know, every great project begins with a good idea. Ideas abound, especially in the minds of art students. “So it’s rather about which of these many ideas has the potential to kindle the fire,” says Philipp Kotsopoulos. He knows from experience: “A good idea is the initial spark from which the previously unexpected emerges.” Besides a promising idea, persistence matters, too. And so does flexibility. As with many things, team spirit is also a great help: exchanging ideas with other project teams and with experts from the Z-Kubator. “Still, I don’t think we should overestimate our role as backers,” emphasizes the head of the Advisory and Support Office. “Despite our wide range of services, in the end everyone needs to find their own way.” During his many years of coaching, Kotsopoulos has seen many mentees head into the working world. He has observed how they have grown with their tasks, how they have developed — and how they have ventured forth, self-assured. Among them are some for whom the signs don’t necessarily bode well at the beginning: young entrepreneurs who do things quite differently than planned. And who nevertheless — or precisely because of this — reap success. “And that’s nice to see,” he says with a smile.

Eva Kunz is a journalist and works for a daily newspaper. She studied journalism and organisational communication at ZHAW Zurich University of Applied Sciences. She already contributed to Zett as a student. And she has once again passionately pounded her keyboard for this issue.
Teile diesen Beitrag: