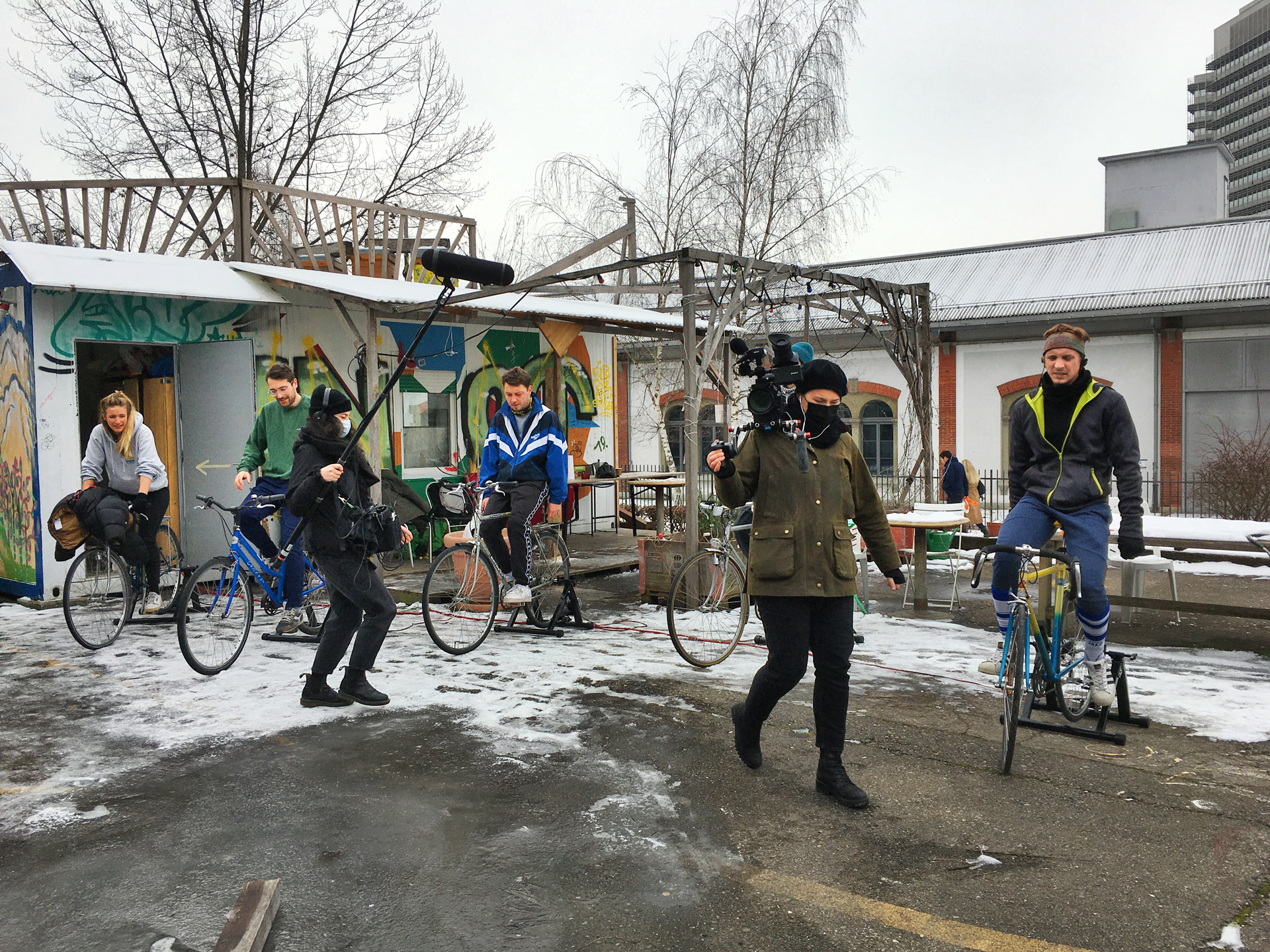 No pain, no gain: muscle power is what makes sustainable filming on the set of “The value of things” possible in the first place. Photograph: Simon Denzler

A Swiss “Tatort” episode produces around 38 tons of CO2. That’s more than eight Swiss citizens release into the atmosphere every year. Young film-makers like Leon Schwitter and Tobias Luchsinger are raising awareness around this pressing issue through ecological productions, questioning the status quo.

Why do we recycle at home and drink from proper glasses while film crews thrash everything — including plastic cups? Why do we use public transport and bicycles in our private lives but let ourselves be chauffeured around film sets? And last but not least does art mean we can deal with resources as we please? Film-makers at ZHdK are asking themselves questions like these to raise awareness of ethical and ecological responsibility. They are also taking action.

Leon Schwitter finished his Bachelor in Film in 2021 and dedicated his degree film to the topic of sustainability. “So far so good” is a pointed observation of a hot day in Switzerland. Various shots show how Swiss people are confronted with climate change. The film deals with sustainability both in terms of content and production. This conscious way of film-making is called green shooting and makes resource-saving methods an integral part of the production.

Leon Schwitter and his team broke down the production process into individual steps and kept asking themselves: “How can we reduce emissions?” Among others, they decided to reduce fossil fuels, which affected their choice of film locations. As cargo bikes could not be used over longer distances, public transport took the team and its equipment from A to B. Flexibility and creativity were required, while original ideas changed, yet without sacrificing qual-ity for sustainability. “Sustainability is often associated with sacrifice. But for us, it’s much more about more closely examining the issue and the possibilities arising from it.” During the produc-tion of “So far so good,” unecological catering was replaced by food unsold by local restaurants and shops. It was served on the set the next day. Everyone enjoyed it, so food waste was not an issue. The daily rhythm determined the shooting schedule: resources such as daylight or existing equipment were used and film material was reduced to the essentials.

Tobias Luchsinger has also taken responsibility. Now in the final semester of his programme (he is specializing in Directing Documentary), he’ll be finishing his Master’s in 2022. His climate-neutral documentary “Der Wert der Dinge” (The value of things) portrays three people from Zurich who are creating new, sustainable alternatives in the construction, food and textile indus-tries. The footage, shot by Tobias’s director of photography, allows viewers to immerse themselves in the world of sustainable filming. The film-makers even produced their own electricity on set using muscle power and solar energy. “Once the electricity is used-up, the crew is forced to take a break until the batteries are recharged,” says Luchsinger. “It has been an adventure for all of us and will shape the film’s dramaturgical tension.” Pedalling hard to produce electricity has made the team realize just how much power and time are needed to generate energy. Leon Schwitter and Tobias Luchsinger agree: “You don’t regret acting sustainably. The added value for film-making and the environment outweighs the effort.”

New Paths? A Must!

Sabine Boss, Head of Programme Film at ZHdK, adds: “Larger productions like the Swiss ‘Tatort’ cannot produce electricity themselves. But they can make decisions that reduce CO2 emissions.” Synergies can be created at all levels. Whether electricity, catering, transport, materials, technology or equipment: more eco-logical alternatives already exist in many fields, such as electric vehicles or LED lighting. The first steps are consciously engaging with the issue and being willing to go new ways. For Sabine Boss, it is clear: “There’s no carte blanche for art. We’ll achieve our climate goals only if we all pull together.”

Bianca Bauer (bianca.bauer@zhdk.ch) is responsible for communications at the Department of Performing Arts and Film. She likes buying secondhand, carpooling and the “Too Good to Go” app.
Teile diesen Beitrag: