Finding Language on the “Playground” 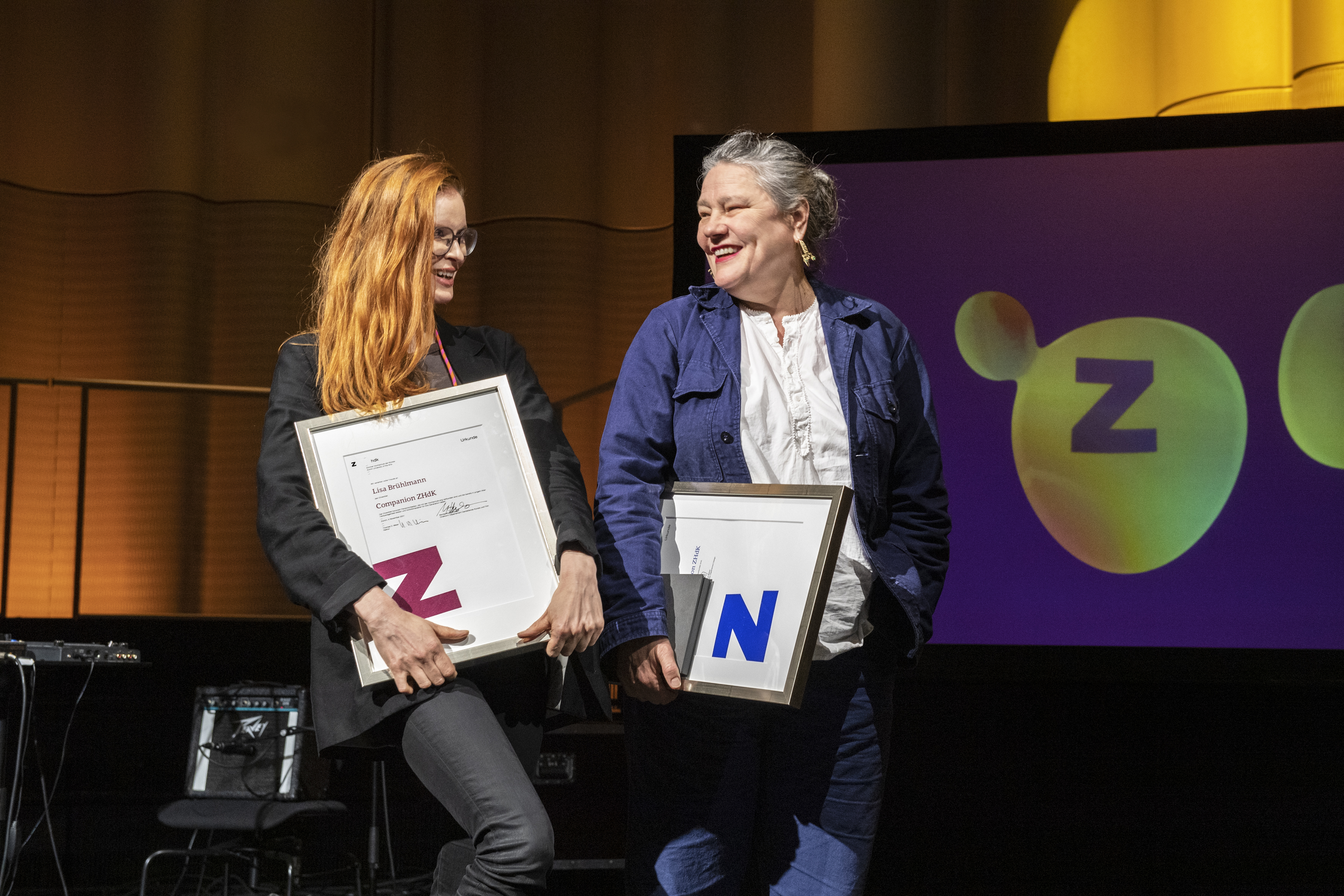 Lea Dahinden: Sonnhild Kestler, what do you remember when you think back to your student days in the 1980s?
Sonnhild Kestler: Well, the studio situation at Zurich School of Design: we had workshops, space and time. For example, when I photographed something, I went up to the photographers and we developed the film together. School taught me so much beyond textiles.Lisa Brühlmann: Yes, my experience was similar. I studied at ZHdK for five years, first at Limmatstrasse, later at the Toni-Areal. I always saw studying as a large playground. It’s there, you can use it, you can ask people and benefit from their knowledge. It totally inspired me: the freedom, but also the possibilities.

Why did you decide to study at our university?
Lisa Brühlmann: I was an actress before. Many actresses go straight into directing, but I told myself, “No, let me learn the craft.” I wanted to know why the lamp on a set needs to stand right there rather than somewhere else. It may sound stupid, but I learned to fail at ZHdK. And that taught me so much. Of course, it’s cool to succeed and perform. But studying helps takes this intermediate step.
Sonnhild Kestler: At the time … I was interested in textiles and jewellery … there was a great school in Munich. But I signed up for the preparatory course in Zurich, after which everything went so smoothly. I didn’t need to look for another school!

How does one develop one’s own language as an artist?
Sonnhild Kestler: By working and being attentive. I was keen to discover for myself what is relevant or exciting. Does it make sense? Does anyone want what I’m offering? Can it be sold? After all, you want to make a living from what you do. Grappling with these questions was hard and took decades of practice.
Lisa Brühlmann: I find my own language in confronting the world and myself. On the one hand, I perceive what is going on in the world, what I like and what inspires me to tell stories. On the other, I grow aware of what matters to me, what I want to tell and why. All of this shapes my cinematic language. In film, everything has been done before — in fashion too, right?
Sonnhild Kestler: Yes, absolutely.

And what does one do when everything has been done?
Lisa Brühlmann: Well, among other things, you ask yourself why do I like this and how can I reinterpret it? You also look inwards to get to know yourself better. At some point, it’s very important to know who you are and what story you have to tell.
Sonnhild Kestler: Yes, one’s art is one’s life. My work is my life. That’s why I’m closely connected to it and lack distance. Now and then, I ask myself: “Why are you doing this? Why does it drive you like this?” It has to do with your character — and with wanting to achieve what’s in your head or somewhere else within you. This intense preoccupation with textiles borders on obsession — as it can probably also develop in film-making. You do something because you have to, not because you have a particular goal in mind. You just go for it.

Once a year, ZHdK awards two honorary titles: “Honorary Companion ZHdK” for many years of service and “Companion ZHdK” for outstanding achievements at a young age. The titles are not tied to any financial benefit. ZHdK staff and students may nominate candidates. Award decisions are taken by the University Board, as advised by a committee.
The 2021 title of “Honorary Companion ZHdK” was awarded to Sonnhild Kestler, a textile designer and ZHdK alumna (she graduated from what was then Zurich School of Design in 1985). Exquisite quality and an independent language lend her works an unmistakable character. Sonnhild Kestler’s textiles are pictorial and narrative. The winner of the 2021 “Companion ZHdK” is Lisa Brühlmann. Her highly decorated degree film “Blue My Mind” (2017) paved the way for the ZHdK alumna’s international career: “Killing Eve,” her first directorial work for BBC America, was nominated for an Emmy in 2019, the highest award for television productions.
Lea Dahinden (lea.dahinden@zhdk.ch) is a project manager at ZHdK University Communications.
Teile diesen Beitrag: