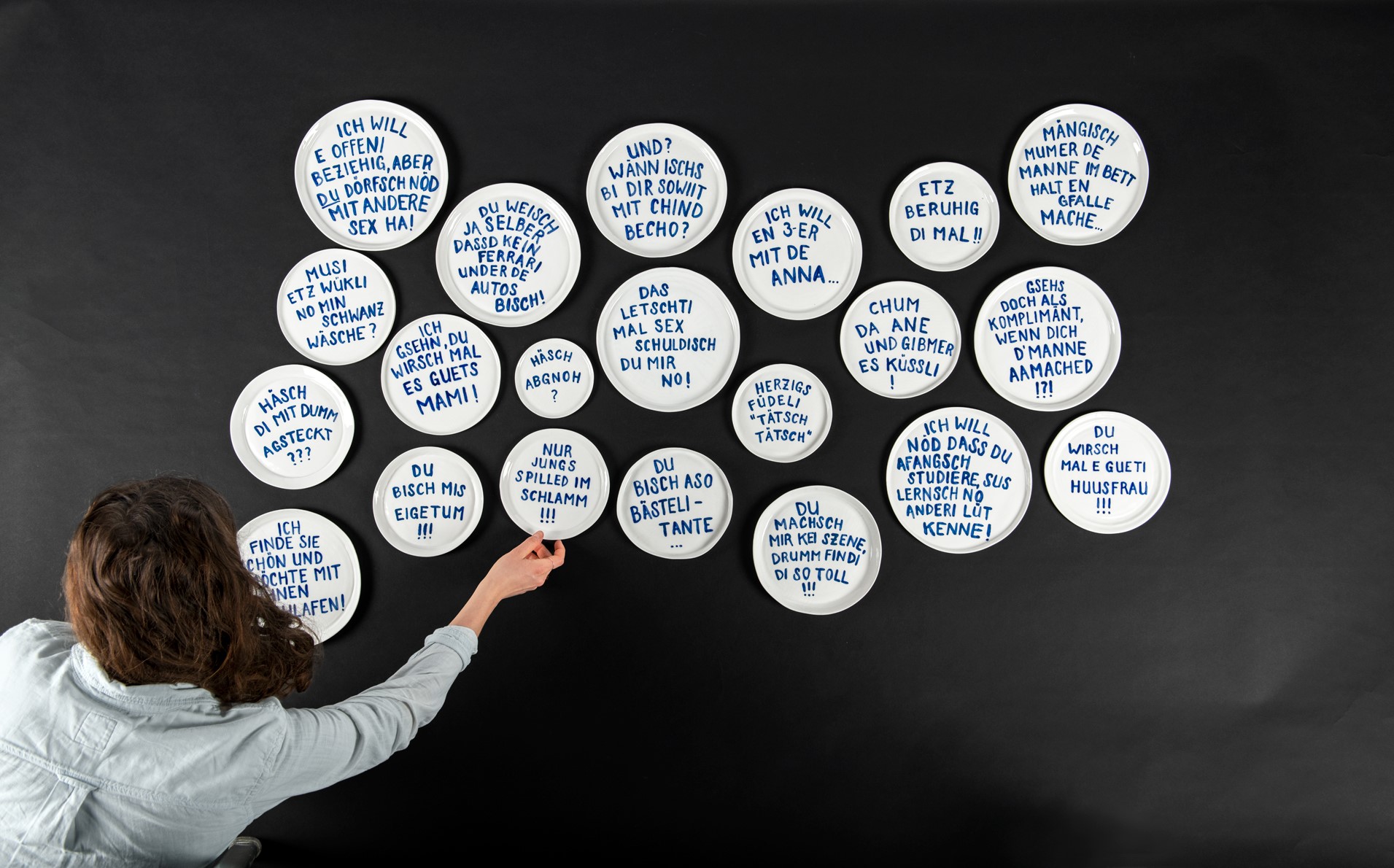 Silence is used in many ways in art, design and education. This is also the case in Anna Iphigenia Siradakis’ art education degree project. Painted on porcelain, sentences that leave us speechless await their lustful destruction. Photograph: Robert Aebli.

What role does silence play at an arts university? What evokes silence in dance, design or music? Eight individuals from as many disciplines at ZHdK break the silence andexplain what they associate with it. Shush! Things are going to get forceful, powerful and loud.

“I love that bristling noise in the cinema when a character takes a breath to speak … and then remains silent. Countless noises are faded out in sound design, so as to make only those audible that can move a person emotionally or inspire them to act. Selective listening, also called the ‘cocktail party effect, ’ is one of many psycho-acoustic ways of immersing oneself in the inner world of actors. It is precisely this power of omission that, for me, is part of the magic of cinema.”
Maurizius Staerkle Drux, Lecturer in Film and Sound

“For me, silence is very contradictory. I can offer guidance on letting go and continuing to breathe. Or I remind one person to maintain contact, to wait for their counterpart’s reaction, to feel the space, to feel themselves. I know how vulnerable people become in silence and how strong savouring it can feel. Silence is musical in the sense that it plays a significant role in determining the rhythm of the text, and the speaker determines this along with all other participants. Such a composition can only take place on stage, in expression and through connection. Silence belongs to theatre like water to an aquarium.”
Julia Stanoeva, Lecturer in Speech

“Writing about his legendary ‘silent’ piece ‘4’33”’ (1953) in 1972, John Cage wrote (and I paraphrase) that it had marked an attempt to expand consciousness with possibilities that differ from those we are familiar with and from those we already feel at ease with. We need to free ourselves and our memory from our preferences. Cage felt that in the field of music a very long performance of this piece would be needed.In 1964, György Ligeti gave a lecture on the future of new music by remaining silent.Music measures itself by silence.”
Felix Baumann, head of Composition and Music Theory

“How can curators and art educators make silence take effect? The Jewish Museum Berlin provides one answer to this question: Thousands of faces with open mouths, welded from round iron plates, cover the museum’s floor. Visitors can step onto the work and, as they do, the wobbly ground underfoot creates a sense of unease while the clanking of plates breaks the silence. This work by Menashe Kadishman raises the question of how we can com­municate the Shoah as a shared experience. It makes me fall silent and cry out at the same time.”
Bruno Heller, Assistant, Master in Art Education, Curatorial Studies

“Logocentrism is not a dance.

“700 hours of silence: In 2010, Marina Abramović staged a performance entitled ‘The Artist Is Present’ at the Museum of Modern Art (MoMA) in New York. The artist sat silently at a wooden table opposite an empty chair and waited for visitors to take turns to sit on the chair and to look into her eyes. For almost three months, eight hours a day, she met the silent gaze of 1675 strangers. Encounters lasted until participants decided to get up and leave. Although communication was limited to the minimal movements on participants’ faces, the individual experiences sometimes evoked strong emotional reactions in museum visitors. The artist described this performance as one of her most difficult ever.”
Swetlana Heger, Director of the Department of Fine Arts

“Silence, the other sound

Silence is an important element in the dialogue between the disciplines. Currently, for example, in artistic projects on chronic pain and dementia with institutions in the fields of medicine, basic research and ethics.”
Irène Hediger, head of artists-in-labs program