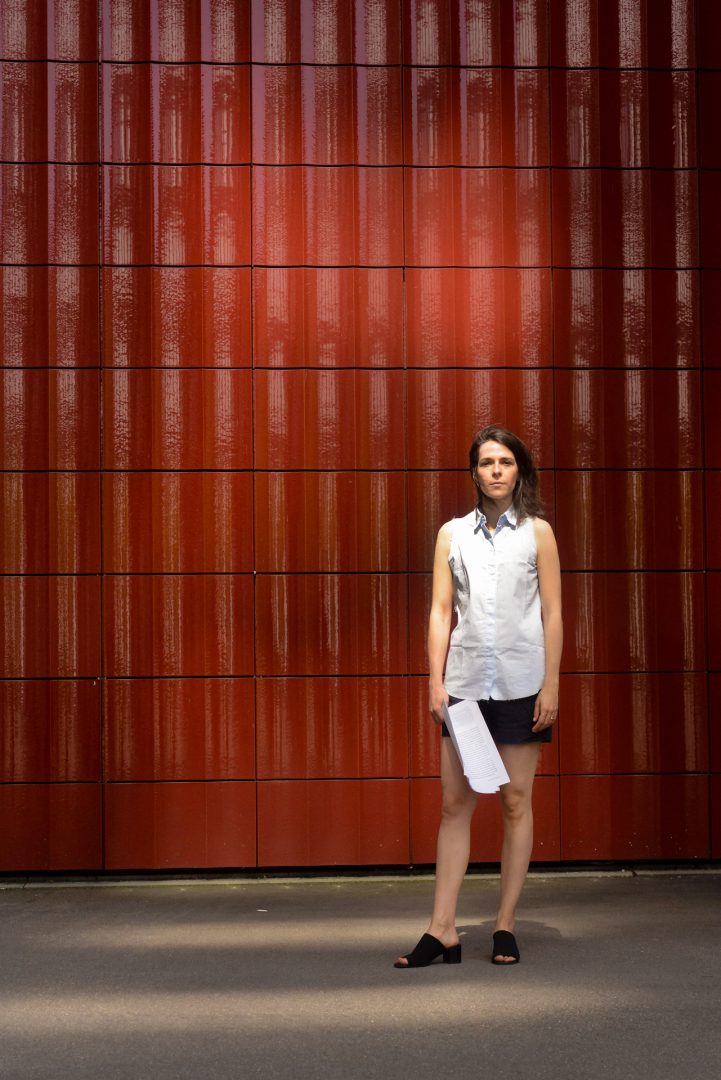 In her classes, Fine Arts lecturer Marie-France Rafael fosters dialogue; in her research, she is interested in how analog blends with digital. Photograph: Alan Maag.

Preparing fine arts students for a professional life in which they must constantly reposition themselves and deal reflexively with their own artistic practice: this is one of the goals of Marie-France Rafael, who took up the first tenure trackposition at ZHdK in 2019. As a lecturer in “Art in Context,” she aims, among others, to allay students’ fear of writing and theory.

Despite being on her way to becoming a professor, Marie-France Rafael has never stopped being a student. She wants to answer the questions she asks her students herself. And like them, she keeps learning every day: “Students are sometimes afraid of writing or theory. But there is neither the perfect text nor do we completely understand everything we read,” says Rafael, whose classes include “Writing as Creative Practice.” It is precisely such discourses that challenge her and that she wants to explore with students.Marie-France Rafael was born in Munich, studied applied film studies at the Sorbonne in Paris, and art history and film studies at Freie Universität Berlin. Rafael, whose surname is Jewish-Hungarian, holds a Romanian and an American passport and speaks four languages fluently. The mother of a young boy came to Zurich in 2019 to take up ZHdK’s first tenure track position as a lecturer in “Art in Context.” The position is limited to a period of four years. If evaluated positively, Rafael will then be confirmed as professor of “Art in Context.”

Learning to deal with critisism

“Theory is usually much more closely linked to artistic practice than many students think,” Rafael is convinced. This explains why she wants to illumine current developments in art in the context of so­cio-economic and political conditions in her seminars. For example, she examines “image production” with video works by French artist Brice Dellsperger, in which he re-enacts selected scenes from well-known feature films and has “body doubles” play all the roles, male or female. “Normative narratives in particular are conveyed by images. I see my task as pointing out these mechanisms and as encouraging students to actively counteract them with their artistic practice,” says Rafael.Her students engage with identity, gender or hegemonic structures. They want to know how to position themselves, to understand how their art is perceived and to learn how to deal with criticism. “I want to create an atmosphere that enables students to openly share their thoughts and in which we are in constant dialogue. Working in small groups is a luxury,” says Rafael. Due to the pandemic, classes had to meet online, lately, and students attended from wherever they happened to be at the time — at Toni-Areal wearing a mask or in their garden smoking a cigarette. Moving online has offered many opportunities, she notes: “I had planned a field trip to the Bucharest Biennale that I didn’t want to cancel. So instead, we explored the city virtually and invited guests to participate via Zoom, for example, the Romanian performance artist Manuel Pelmuş.”

Art as a means of reflection and communication

The coronavirus pandemic has changed our understanding of technology and digitality. As a member of the Digital Council, Rafael is concerned with the future of ZHdK. To help shape it, she prefers to think from the future back to the present than vice versa: “I find it more exciting to ask ‘What can I do better now?’ than ‘What will I be able to do better?’” she explains. Besides her involvement in the Digital Council and her teaching commitments, Marie-France Rafael is active as a researcher. Her research focuses on the history of exhibitions and the artistic strategies of presenting art as a means of reflection and communication. One of her current projects looks at post-digital relationality: What happens when the production, circulation and consumption of contemporary art increasingly merge and become one? When they can no longer be separated? Will purely analog or purely digital art still exist in the future? And to what extent will this indiscernibility lead to an artistic working process? Central to her teaching and research, Rafael says, is “producing a theory that realizes itself in practice.

Tenure track means a career path leading to a professorship. Tenure track positions enable candidates to gain the qualifications needed in teaching, research, leadership and management to be appointed full professor. Such fixed-term contracts (with a minimum workload of 80 percent, of which at least 20 percent each are allocated to research and teaching) are particularly attractive for experienced junior researchers.
Lea Dahinden is a project manager at ZHdK University Communications.
Teile diesen Beitrag: