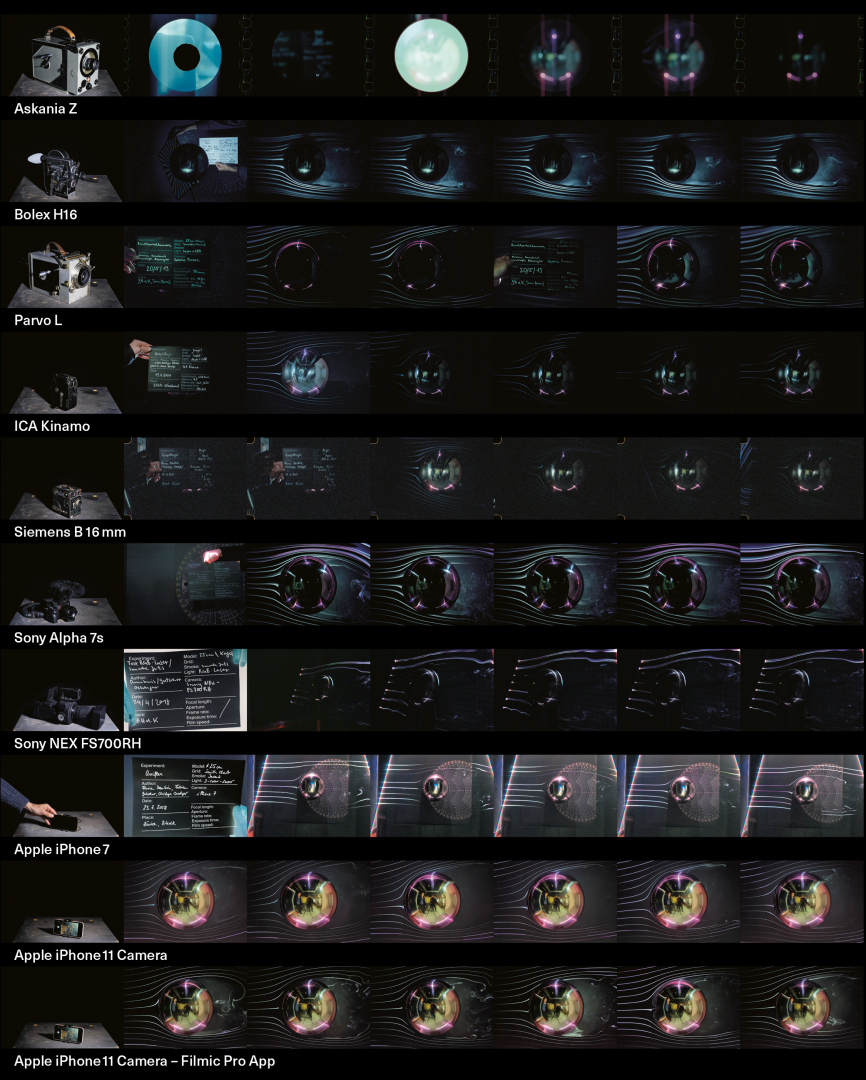 A selection of nine of the 16 cameras used: the oldest camera dates from the 1920s, the newest from 2019. All film stills were photographed with the respective cameras. Photographs: Florian Dombois, Christoph Oeschger.

“Allmende” are a form of communal property. What happens when artists work with the same source material? Florian Dombois and Christoph Oeschger are leading a research project dedicated to making their film and video recordings from ZHdK’s wind tunnel available to others. They are as such working towards establishing a notion of research as “sharing and challenging.”

Scientific papers often close by stating that “further research is needed.” What has been set out in detail, and substantiated with watertight evidence, in the preceding pages is as yet inconclusive. One would either like to continue pursuing the research oneself, or let others take over. The paper, then, provides a basis for other scientists to do so. This movement, of handing over and moving on, is interesting for research in the arts. It is perhaps much more interesting than the postulate of knowledge production that is so often argued about in artistic research. So shouldn’t we see research in the arts as a social construction, as a space of sharing and challenging among professionals who offer each other opportunities to connect with (their) research?

Our project “Allmend of Research Films” transfers our work on “Luftbilder/Lichtbilder,” a current transdisciplinary Swiss National Science Foundation (SNSF) project, into such a logic of passing artistic work on to others. Over the past three years, we have filmed a standard experiment we developed (mirror ball in smoke) in the wind tunnel, our form-finding and metaphor-creating machine up on the roof of the Toni-Areal, with changing historical cameras. The choice of cameras was based on what the two science historians on our project found in the archives: from early 1920s and 1930s 35mm hand-cranked cameras like the Debrie Parvo L to 1980s Panasonic or Hitachi C video cameras. Time and again, the same settings, but with changing cameras, lenses, recording media.

… GROWS INTO A REPOSITORY OF SEMI-FINISHED PRODUCTS

This conglomerate of film recordings — let’s call them semi-finished products — form the basis for us to continue working. We have both developed our own multi-channel video installations from them, but “more research is needed.” What will other artists do with the same material? What might they see in the images and how will they contextualize them within other footage? How do our works resonate with each other? We gave ourselves five rules of interaction:

In February, the first six films — by Mika Elo, Christof Nüssli, Christoph Oeschger, Luise Schröder, U5 and Irene Vögeli — went online. More films are in production and will be screened in our virtual gallery from autumn 2021. This is how a community of practice is created, a research network that does not construct itself through a theme, but through the stuff that dreams are made of.

FLORIAN DOMBOIS is head of ZHdK’s Research Focus in Transdisciplinarity, where what is perhaps the world’s quietest wind tunnel inspires reflection.
CHRISTOPH OESCHGER Christoph Oeschger (christoph.oeschger@zhdk.ch), an artist and photographer, is doing his doctorate on “How to Take a Picture of Wind.”
Research Focus Transdisciplinarity
Teile diesen Beitrag: