The elephant by the Sihl 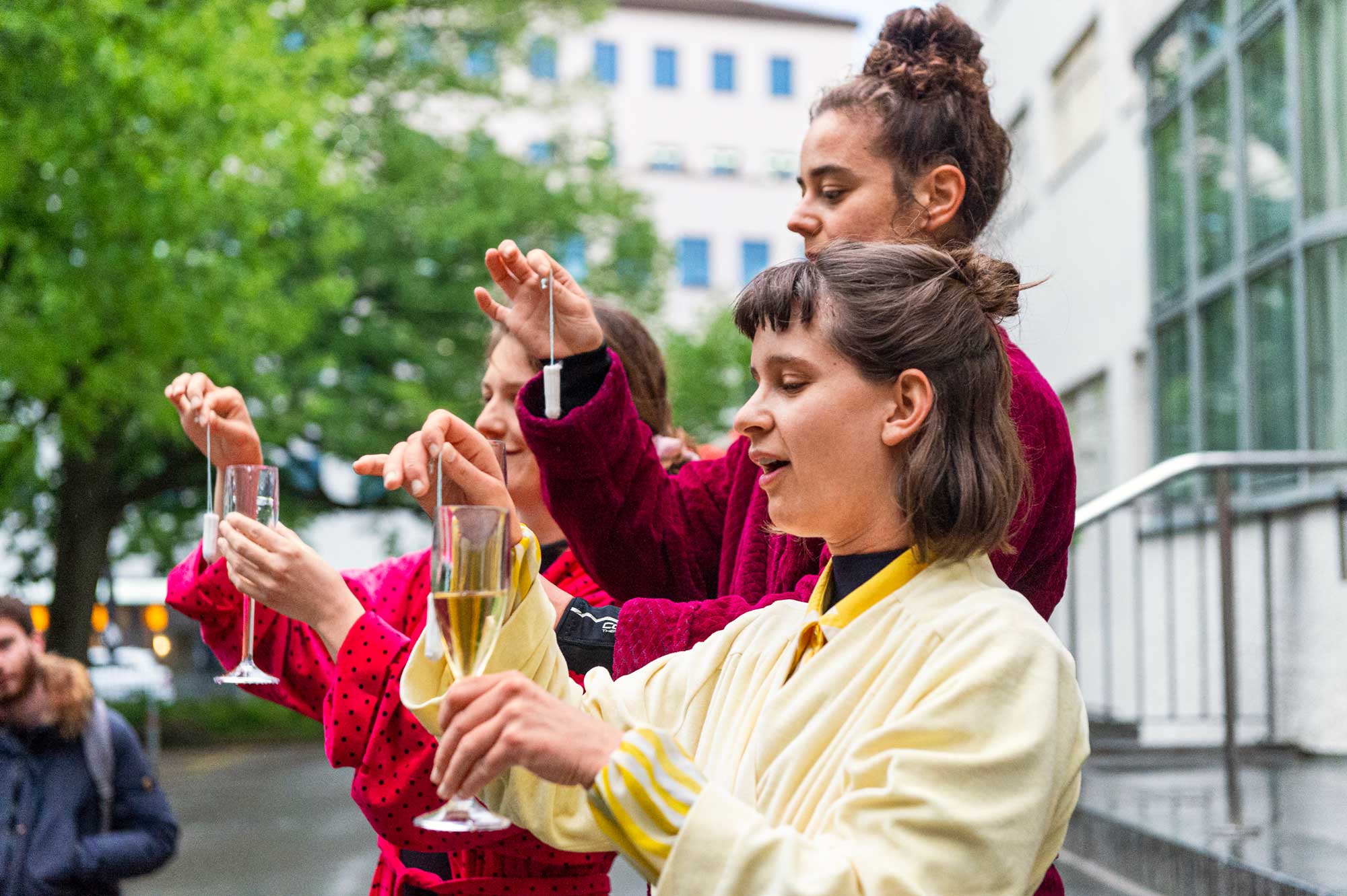 “After the word ‘period’ appeared ten times on Post-it notes, we said ‘Right, we’ll work with that’”. Olivia Stauffer (foreground) on the process of creating “Avanti, avanti”. Photographs: Johannes Dietschi 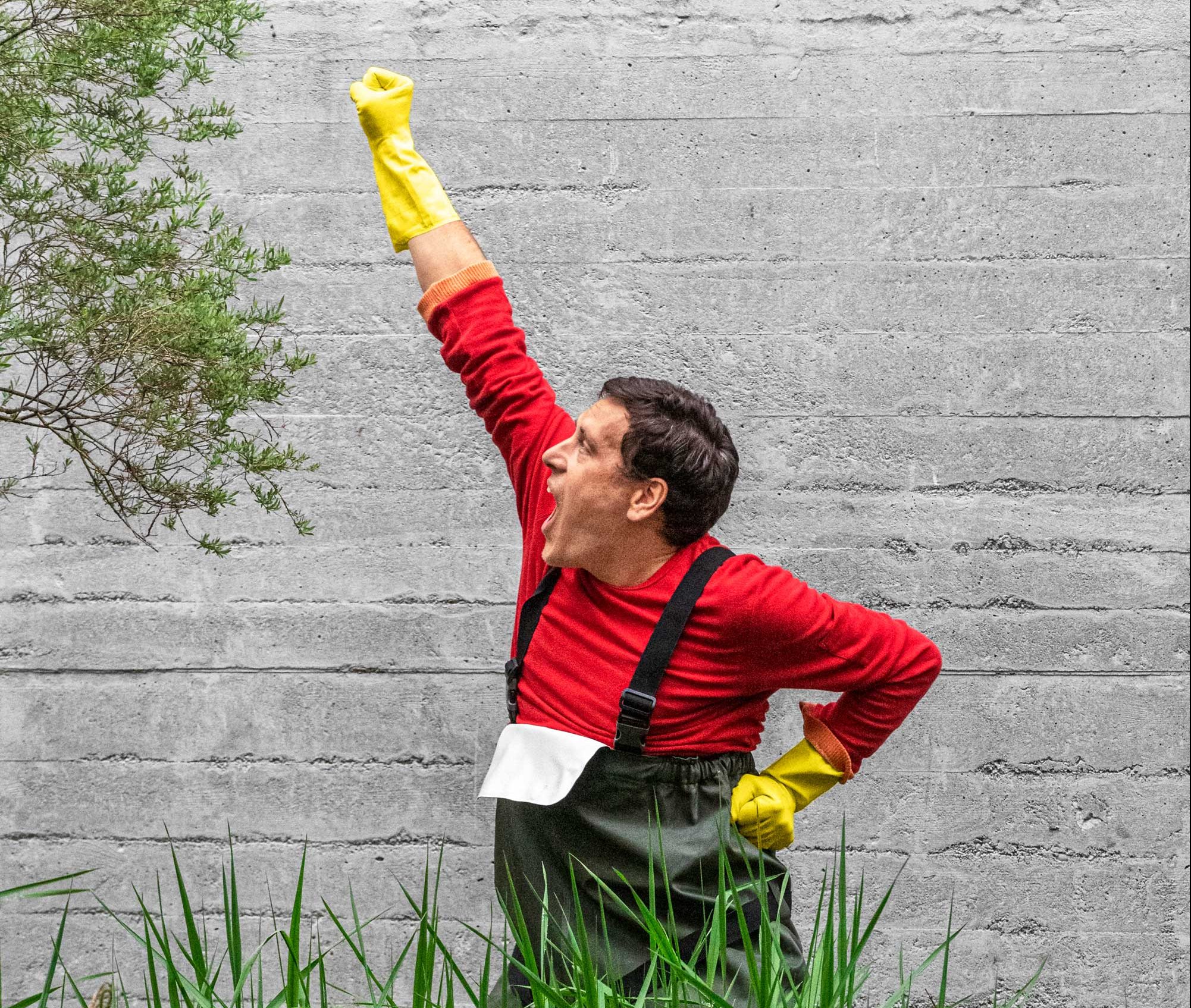 “Somebody Dance with Me”: Student Gian-Andrea Colombo during his DJ Bobo performance. 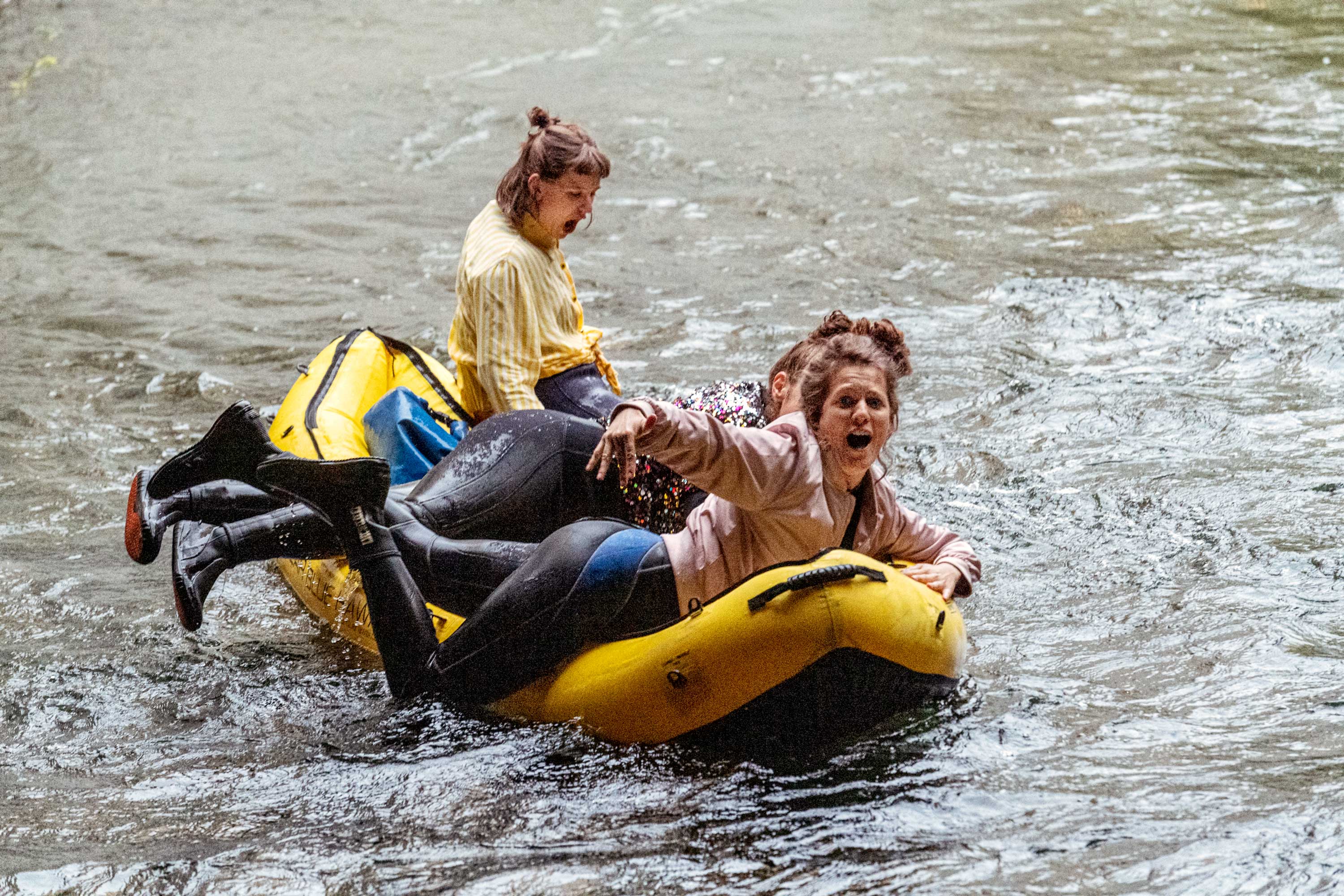 In the Sihl with #metoo poems: students Olivia Stauffer, Melanie Guntern and Sabrina Fischer (from left).

What is difficult to talk about? What is deliberately overlooked? What is hushed up? Seven Bachelor Theatre Education students explored the topic of “the elephant in the room”, which they developed together with young people. The result is a collectively authored educational format. Zett attended the dress rehearsal by the Sihl.

Pop music, dim light, glaring protective masks and airy jogging jackets: seven young people are dancing exuberantly in one half of a circle, moving their arms rhythmically to the music, cheering each other on. The other half is restrained. I look around a little uncertainly, trying to make eye contact. Over there! She feels the same way. I am one of several participants in a walk that will start at Gessnerallee, where the Bachelor Theatre is based, and whose outcome is still completely unknown to us. The dancers are theatre education students who will take us to the Sihl. And before we can even keep up with the gymnastic exercises, the music stops, the door opens and the show begins.

After DJ Bobo to the tampons

The walk is titled “Avanti, avanti” and takes place in all weathers. Besides waterproof shoes, we also need our mobile phones and headphones. A total of six audio files accompany us on the way, and we stop every now and then to watch a performance: outside the City-Hallenbad, three women in bathrobes are dipping tampons into a glass of champagne. By the Sihl, they paddle towards us in an inflatable boat, reciting #metoo poems. On the opposite bank, I spot a young man doing impressive moves to DJ Bobo music, while at Selnau station, monologues on being or not being leave us brooding. And finally, the walk is also about very personal taboos that one can shout into a microphone and get rid of — or does precisely this mean breaking a taboo?

Taboos, the elephant in the room: this is what the preparations were about, during which the students worked closely with young people. In preparing their project, the students visited school classes and a girls’ youth club and interviewed teenagers on the street. “Things really took off!” recalls Maxine Baumann, one of the Bachelor students, who did not expect the youths to get so involved or be quite so open. “The workshops often addressed issues like sexuality, pressure to perform, sustainable living, embarrassment or bodily changes. After the word ‘period’ appeared ten times on Post-it notes, we said: ‘Right, we’ll work with that,’ ” explains Olivia Stauffer, another student.

Friction on the poetry pulpit

The seven Bachelor students, all at different stages of their theatre education studies and some working together for the first time, were a very mixed group. There were few guidelines, but they had to adhere to the time frame and address a “young audience”. “The students wanted to find out what expertise the youths had that they didn’t — and to give this a public stage and aesthetic form”, says Ursula Jenni, a research associate at the theatre education programme. Aesthetics in particular play a special role in staging projects outdoors: for example, Selnau train station became a poetry pulpit or the wooden footbridge by the river became a fan mile. The module, which is firmly anchored in the curriculum, coincided with lockdown due to Covid. By deciding to move outdoors, the students created more scope so that they wouldn’t have to ditch the entire concept if coronavirus restrictions were enforced. Gian-Andrea Colombo, one of the students, considers this an opportunity: “We want to appeal to young audiences who might not go to the theatre regularly.”

The students took turns to run the rehearsals, direct the participants and coordinate the project. So everything went ahead smoothly? “No, not always”, is the unanimous response. Friction is part of things. And yet: major issues can be tackled better collectively than on one’s own. And between idea and premiere, many questions arose that led to surprising answers. Or who would have thought at the beginning of the module that the elephant in the room could best be addressed down by the Sihl?

Lea Dahinden is a project manager at ZHdK University Communications and likes walking along the Sihl, with or without an elephant.
From their first semester, Bachelor Theatre Education students help people from different cultural and social backgrounds access the world of acting and theatre. The “Collective Work” module is integral to the curriculum and focuses on theatre work for and with young people as co-authors.
Teile diesen Beitrag: