Is the cultural sector systemically relevant? 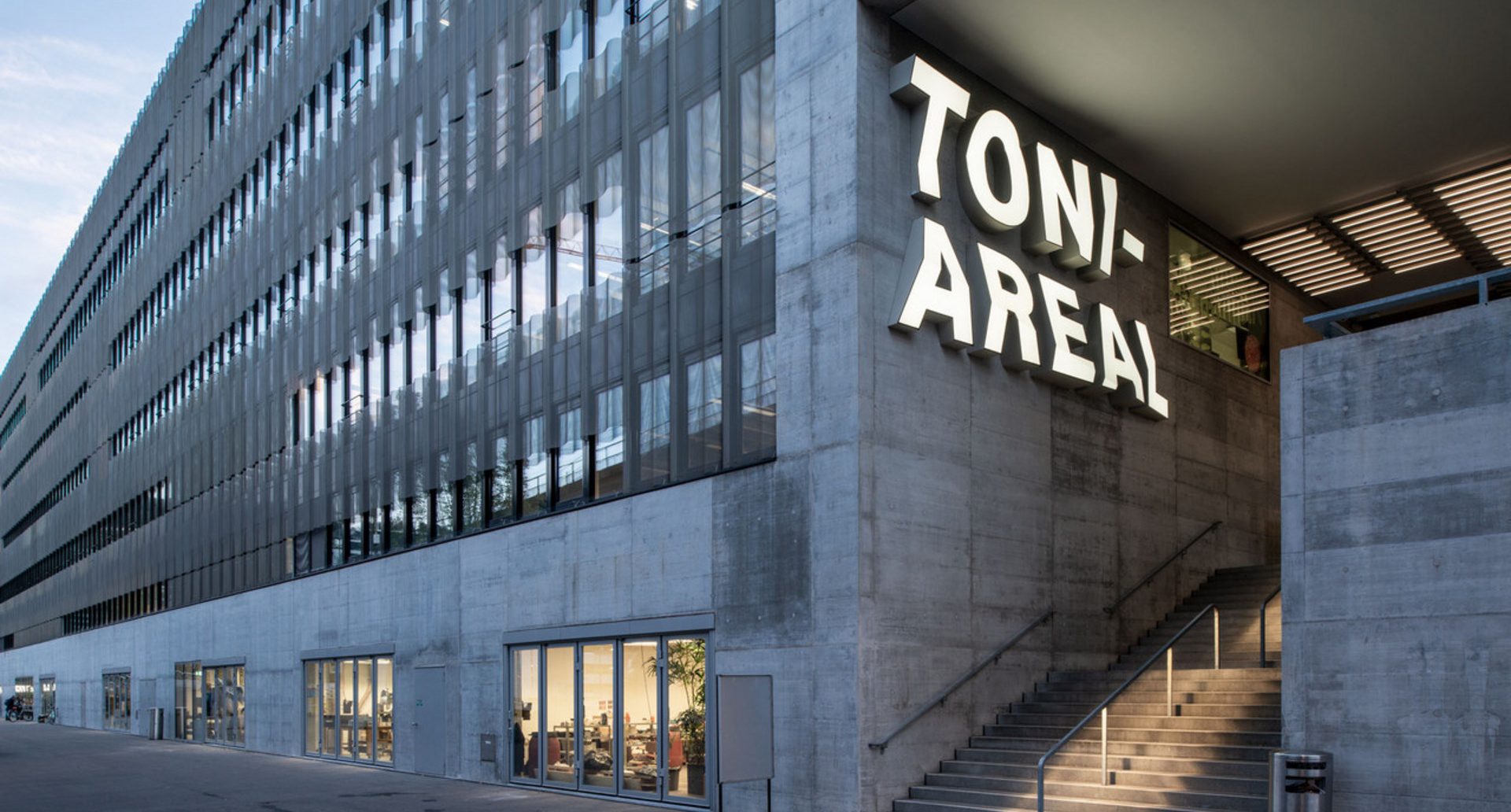 Located in the Toni-Areal: the Zurich Centre for Creative Economies, a competence center for the creative industries. Photo: Umberto Romito and Ivan Suta © ZHdK

No concerts, no theatre performances, no museum visits: it goes without saying that cultural life was directly and drastically affected by coronavirus in 2020. Since the beginning of the pandemic, the ZHdK-based Zurich Centre for Creative Economies (ZCCE) has been investigating the possible effects of the crisis on the cultural labour markets.

Spring 2020: closed cafés, empty streets, no gatherings. An unusual situation, one that prompted four ZCCE researchers to inquire whether any particular trends have emerged for the creative economies as a whole. And if so, what might these mean for employment figures? At a time when the extent of the coronavirus crisis could not yet be gauged, the ZCCE launched a series of research notes titled “Sleeping Beauty” — and thus presented the most up-to-date analyses in Switzerland.

“We are convinced that in times of the pandemic, cultural workers are not a problem but part of the solution.”
Frédéric Martel, Professor of Creative Economies

In the first research note, Frédéric Martel, Roman Page, Christoph Weckerle and Simon Grand draw a historical comparison with the Great Depression in America, in order to offer preliminary insights into the present in the second part of their study based on qualitative interviews. “During our field research, which we conducted exceptionally via Zoom, we asked cultural workers from Zurich to New York about their situation, how the pandemic had impacted their work and how they dealt with the crisis,” says Frédéric Martel, ZCCE Professor of Creative Economies. “We are convinced that in times of the pandemic, cultural workers are not a problem but part of the solution.” The third research note discusses current statistics on the creative economy in Switzerland while the fourth explores structural changes: How do the creative economies respond to the challenges posed by the crisis?

ZCCE researchers started analyzing statistical data to reveal the dimensions of the creative economies as early as 2003. They are now applying their methods to measure the possible impact of the Covid-19 crisis on the labour market. Their work illumines questions such as “Are the entire creative economies caught in a negative trend in the face of the pandemic?” These, however, cannot be answered so easily. The ZCCE makes its latest statistical analyses available on its website under Creative Economies in Data.

This chart shows all persons employed in Switzerland’s creative industries by sub-sector from 2015 to 2020. Source: FSO, SLFS, ZCCE calculations

In the creative economies, the share of self-employed person is higher than in the overall economy. In individual areas of the cultural sector, such as “Music, Performing and Visual Arts” or “Design,” the proportion is particularly high. Further analyses by the ZCCE will show which employment relationship is the most crisis-proof in the creative economies: Does permanent employment in a large cultural enterprise count for more or the flexibility of self-employment? 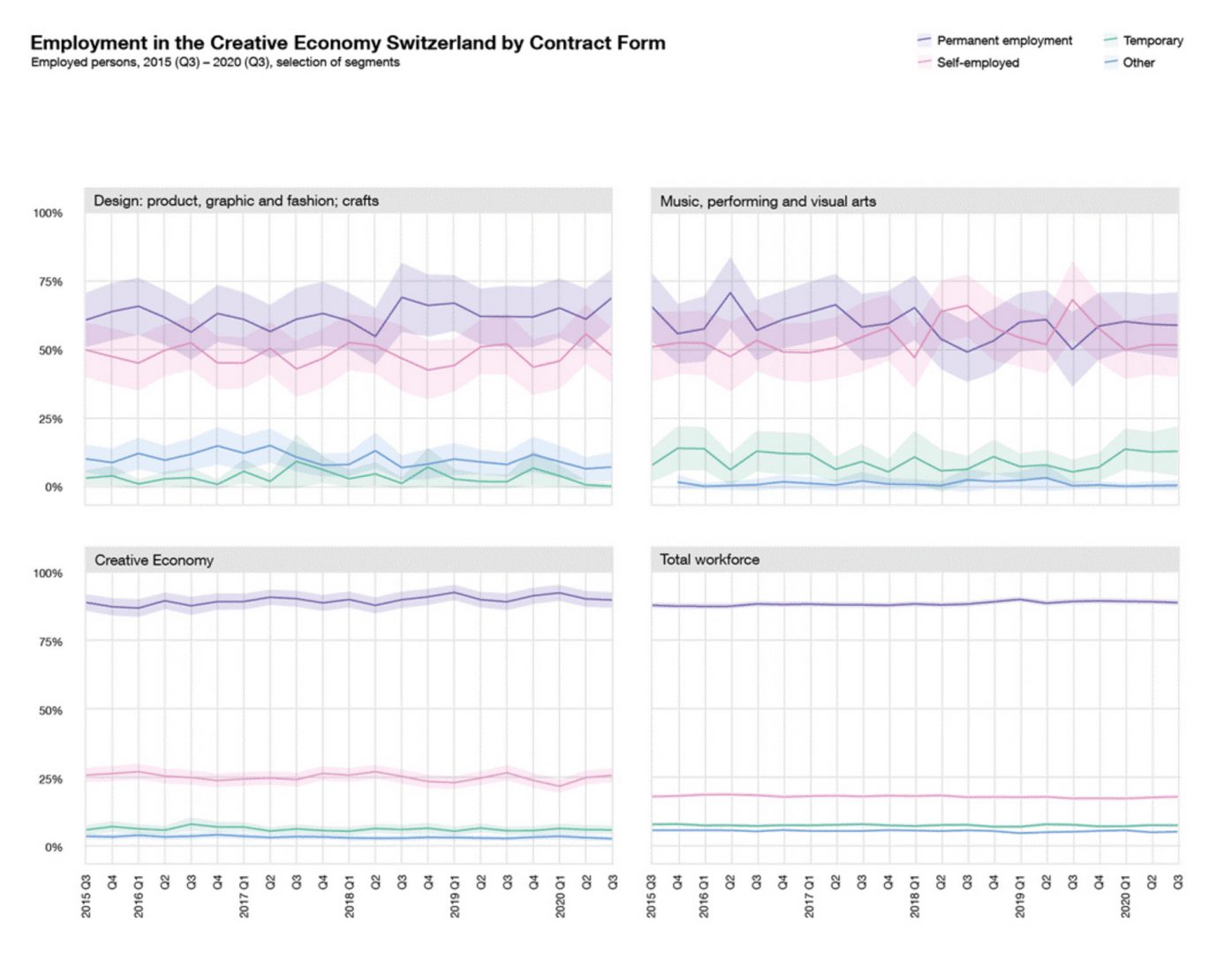 This chart shows all persons employed in the overall economy compared with the creative industries by sector and type of contract in Switzerland from 2015 to 2020. Shading represents statistical uncertainty (confidence interval). Source: FSO, SLFS, ZCCE calculations

The cultural sector as a laboratory of the overall economy

As yet, the data do not permit drawing longer-term conclusions from the pandemic. The situation differs, however, as far as the substantive and structural characteristics of the cultural sector are concerned. What has sparked tensions is how to position the creative economies. “Political assessments of the pandemic have taught us that the cultural sector is not systemically relevant,” says Christoph Weckerle. “But precisely the creative economies could contribute fundamentally to dealing with uncertainties and to revealing new paths.” In the crisis, surprising things suddenly become conceivable, discussable and feasible, along creation and realization processes, as well as along the value creation and distribution chain. One example is so-called “in-game concerts,” which are held on video game platforms and attract an audience of millions. Experiments and developments in the creative economies can also reveal essential inspirations and opportunities that later become significant for other areas of the economy.

“It is precisely thanks to their specific way of dealing with uncertainty that the creative economies have revealed new approaches to the challenges posed by coronavirus.”
Christoph Weckerle, Director of the Zurich Centre for Creative Economies

This raises questions such as: What does Switzerland gain by considering the cultural sector to be systemically relevant? To what extent should corresponding infrastructures be classified as critical from society’s point of view? And how can political representation of the heterogeneous concerns and interests of the creative economies be established? Thus, the ZCCE’s “Sleeping Beauty” study, which has been discussed beyond Switzerland, takes up a finding that has preoccupied the research team for some time: instead of focusing primarily on offsetting precarious conditions, it will be essential to also recognize the importance of the creative economies for the future viability of Switzerland.

As an international research and competence centre, the Zurich Centre for Creative Economies (ZCCE) engages in research, teaching, incubation and consultancy in and with the creative economies.www.zhdk.ch/zcce
Lea Dahinden is a project manager at ZHdK University Communications.
Teile diesen Beitrag: