Renaissance: A myth of progress without progress 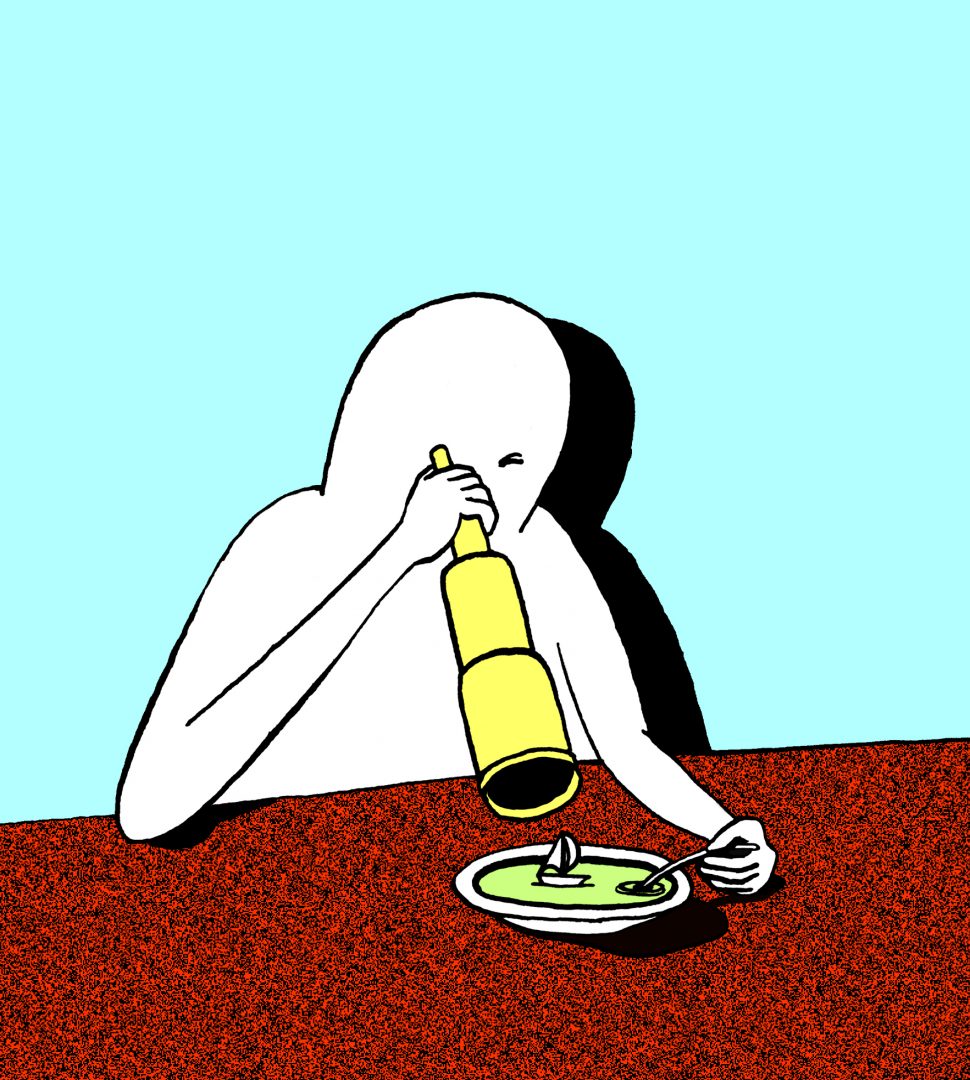 Illustration: Julia Marti. Visionary to the end of one’s nose — an essay questions the immortality of the Renaissance.

Could the eternal story of a new beginning be told anew? Is Greta Thunberg a new David? Can myths be upcycledin a good sense? Sigrid Adorf, professor of Art and Cultural Analysis, pleads for a different colouring.

Once upon a time, the world was a bleak place: dark, cold walls, unpaved paths on which carts stuck fast and tormented horses struggled; chamber pots were emptied in alleys and hunger was satisfied in tiny parlours with a few spoons of soup; noblemen and men of the church meted out punishment, arbitrarily, and paid tribute; the plague and cholera raged, as did rags and abject poverty; fear and lust were set alight on pyres, upon which the unwelcome and unbelieving were burnt, after confessions had been gruesomely extracted from their bodies.
Life in the Middle Ages was cold, deprived and dark, as stage sets, costumes and lighting emphatically teach us. Called as witnesses: showcases with instruments of torture in unheated dungeons of old castles and palaces, which still stir our imagination today.
But then came Durer, Erasmus, Fugger, Holbein, Columbus, Copernicus, Machiavelli, Michelangelo, Morus, Raphael, da Vinci … men who remeasured the old world or, better still, discovered the new world, who set out intrepidly to find new ways, who built larger and more beautiful edifices than ever before, who painted pictures with perspectives that astonished the old masters, and who thought differently and dared to consider their reasoning to be the all-important faculty: against prevailing customs and sometimes against those in power. They set sail, directing their gaze into the distance — visionarily, eager to discover, ambitiously, creatively, full of verve. A new myth was born: the myth of novelty, to whom the sagas of Odysseus, Prometheus and David mattered more than parables of guilt and atonement — the latter being for the weak and faint-hearted.

The post-history (or bedtime story) that the enlightened West tells about how its times changed between the Middle Ages and the Renaissance makes matters easy for itself, not least with its binary distinction between light and dark, to which it fetters all kinds of further distinctions, between male and female, strong and weak, productive and receptive, cultural and natural, sensible and emotional, and so on. Fact or fiction? From the outset, the idea of the Renaissance as a new beginning appeared as an ideological investment in a founding myth of modernity: progress.  Giorgio Vasaris “Vite” (1550), Jules Michelet (1855) or Jacob Burckhardt (1860) are credited for giving the epochal turning point its name. The patent history of naming for better or worse (the search for copyright is itself born of the history recounted here), what remains is the idea that around 1500 new times dawned. We owe these figures the enduring mission of self-liberation and greatness, of reformation, revolution and technical progress that could create a fairer world. Even if it remains disputed who is David and who Goliath, a particular narrative pattern took hold: Michelangelo, in marble standing five metres tall, had for the first time portrayed David before the battle, as a gesture of certain victory and hope, as a new man equal to God, as the two-part educational programme “Renaissance” (broadcast on mySchool SRF) explains.

…to those who wait?

Greta Thunberg: a new David? Or a Joan of Arc? Or a new, different character? Can myths be upcycled in a good sense? It is worth studying the connections. The project of cultural studies, which in art history is inseparably linked to the name Aby Warburg and his Renaissance studies, follows its deconstructive search for the energies between pictorial forms across times and genres — the connections between scientific and popular beliefs that have found expression in images. Myth does not work covertly, as Roland Barthes realized, but overtly. The so-called Middle Ages reveals preparations of what is first attributed to the Renaissance and that, vice versa, demonstrate how “medieval” the later period was. What, however, happens if we add to the Columbus myth the still little-known extermination of millions of people and their knowledge cultures; if we recognize the witch pogroms not as a testimony to the Middle Ages but, on the contrary, as a shadow of modern times; if we “brush history against the grain,” as Walter Benjamin demanded in 1939 in the face of imminent doom?

In the Internet, a dispute over images is raging, especially in the commentary sections, an educational dispute that does not seem particularly new: although the possibility that images can now be removed from schools and other public spaces because they praise colonizers, for example, is decried as an iconoclastic step backwards to barbarism, it can considered to be truly progressive for that very reason. For, as Benjamin observes, “Whoever has emerged victorious will march along in a triumphal procession that leads the rulers of today over those who now lie stricken on the ground.” “The booty is carried along in the triumphal parade, as has always been the case. It is called cultural heritage.” This is still true. For example, “Die Welt” ends its coverage of the controversy over the images of Columbus in the halls of the University of Notre Dame (Indiana) dating back to 1882/84 by giving the final word to Grant Strobl, a law student and self-confessed young conservative who fears that we, if we problematize historical representations, “will reach a point where no more achievements will be left to celebrate.” This, however, would indeed be both new and progress (i.e. a step forward) worthy of its name, because it could end the eternal renaissance of White Supremacy.

Sigrid Adorf (sigrid.adorf@zhdk.ch) is professor of art and cultural analysis in the Master Art Education and Head of the Research Focus in Cultural Analysis in the Arts at ZHdK
Teile diesen Beitrag: