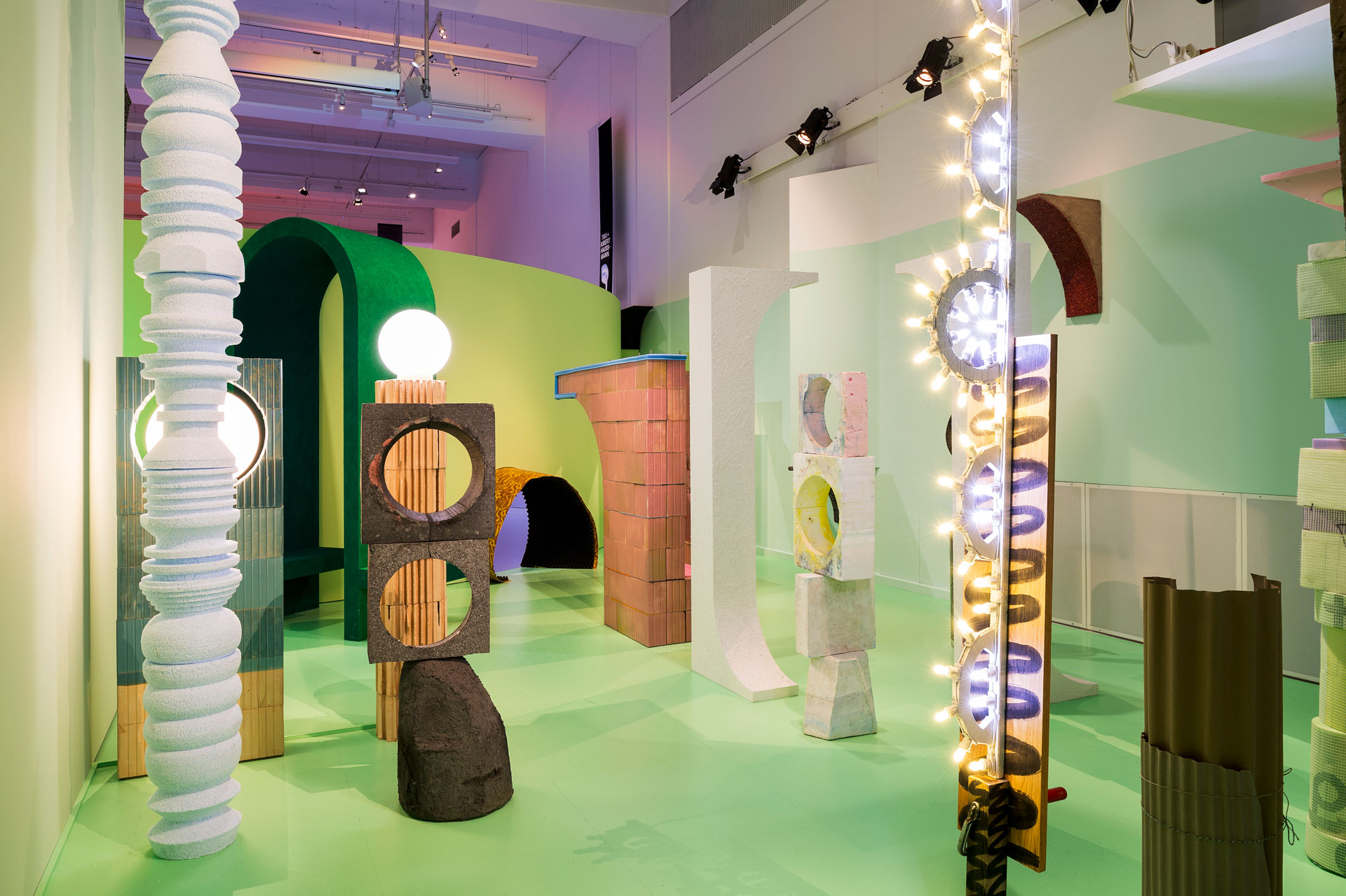 The “Säulenwald” (forest of columns) by Swiss duo Kueng Caputo is one of five total spaces created by international design studios for the exhibition. Photographs: Pierre Kellenberger © ZHdK 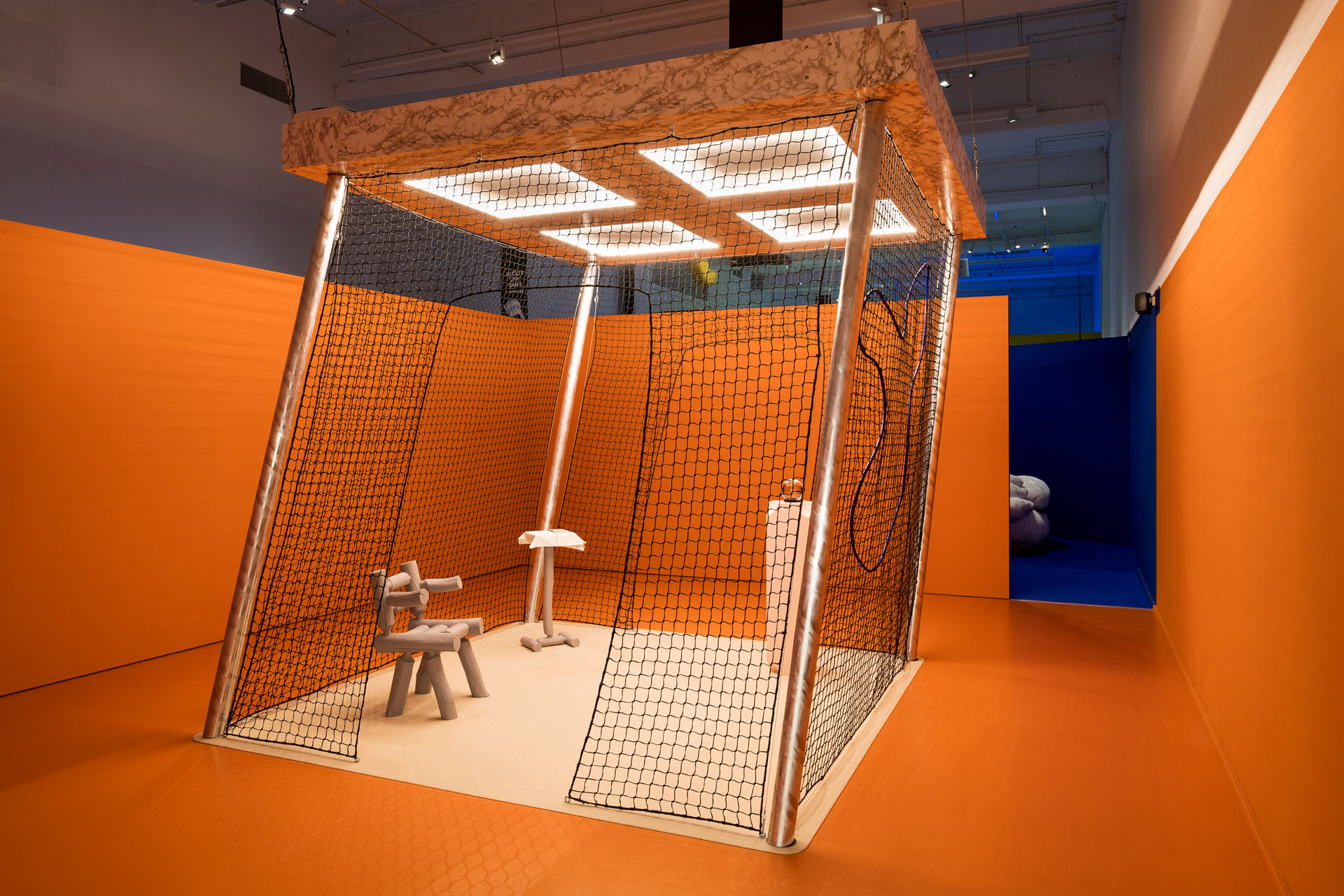 A space set in motion and walls constantly tilting by Soft Baroque. 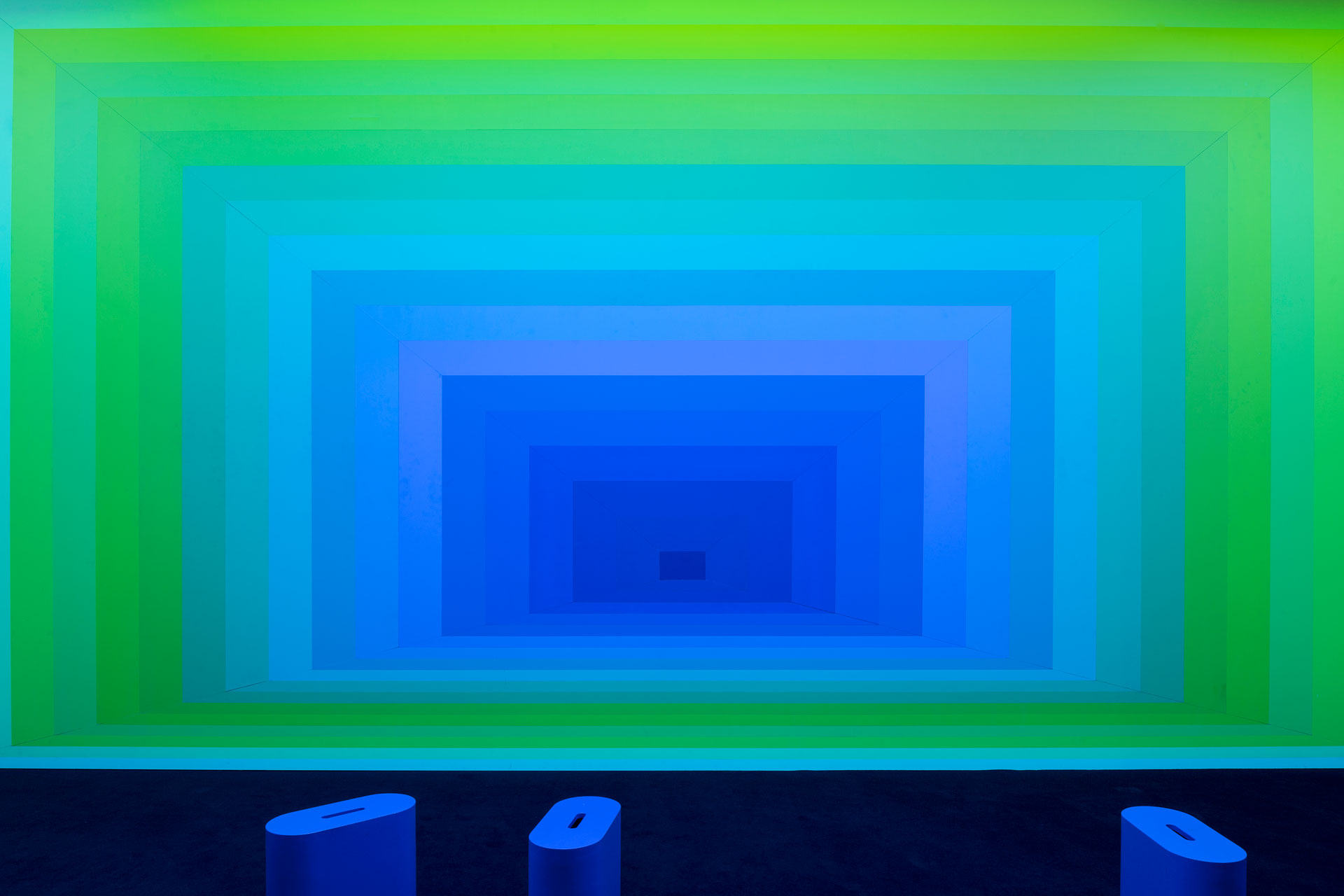 A medley of colours and light: a landscape by Luftwerk. 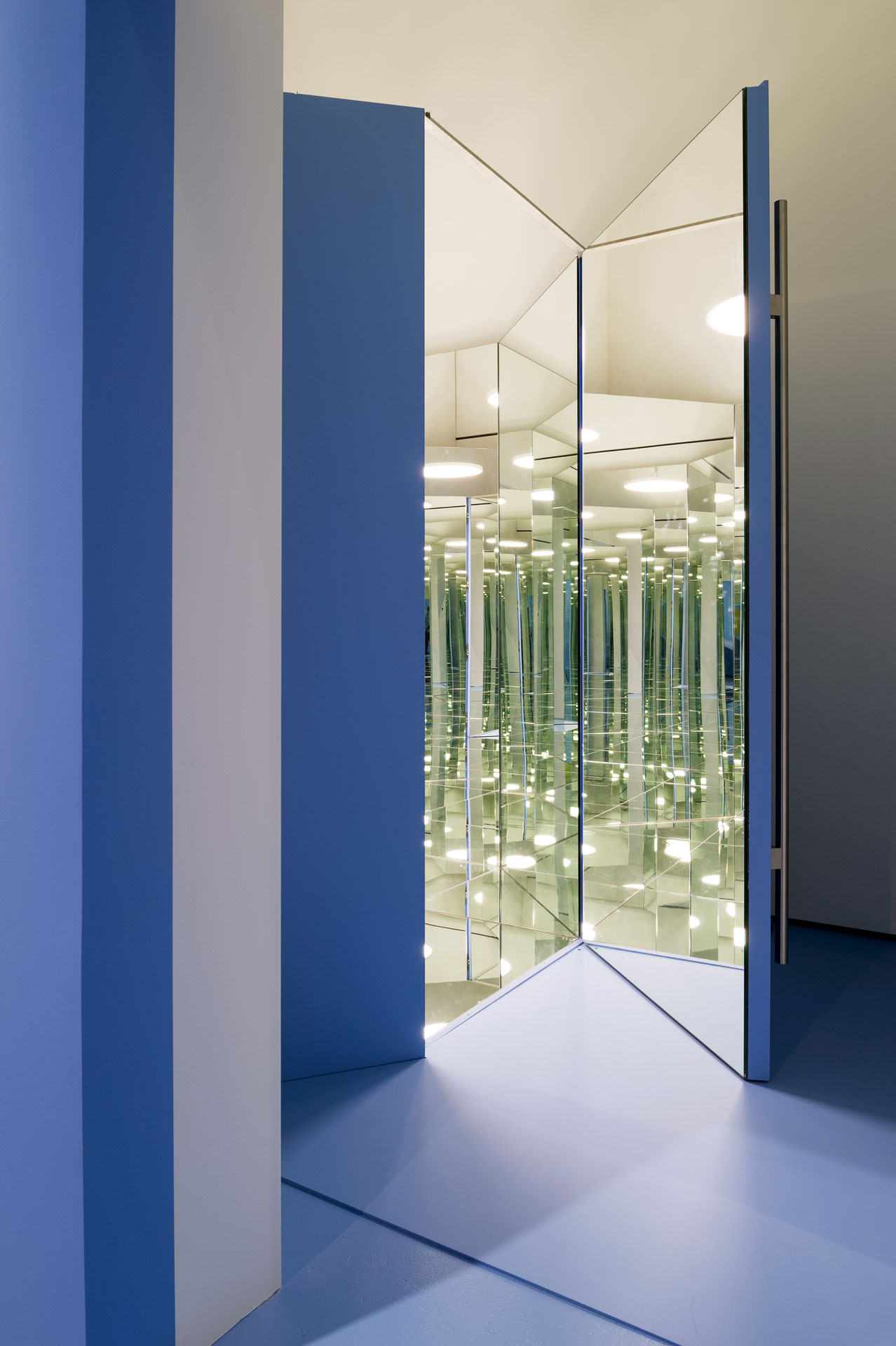 An octagonal cabinet of mirrors according to plans by Leonardo da Vinci: An octagon created by Zurich-based architects and designers Trix and Robert Haussmann.

The exhibition “Total Space” at the Museum für Gestaltung Zürich does not simply exhibit design but enables visitors to immerse themselves completely in design. Finding ourselves in completely unfamiliar rooms, we begin to brood and grow uncertain. And we sense what design can do. An experience report.

Ever since we have been negotiating proximity and distance on a daily basis, and ever since spaces have closed temporarily and are being avoided, our senses have been sharpened for exhibitions like “Total Space.” A visitor panel at the entrance tells me that the show focuses on the spatialization of design and offers viewers an opportunity to experience total space. Visitors are requested to follow a hand in a pale blue glove, which points the way with an outstretched index finger: into a room with antique-looking columns made of cardboard, towers made of Styrofoam, a wall made of bricks that are glazed like tiles. I do not really know what these familiar, yet unfamiliar pieces of construction are about. This helplessness is not such a bad start.

The “Säulenwald” (forest of columns) by Swiss duo Kueng Caputo is one of five total spaces created by international design studios for the exhibition. A printed Wikipedia article in the circular information booth at the centre of the exhibition tells me more about total space. Apparently, it is a space in which design is not shown as a product or object, but can be experienced with the senses and becomes an overall experience. Basically, the concept has quite an everyday goal: I am not meant to approach design from a distance, but to move within it. Except that the designed worlds on display are anything but everyday. In a kind of children’s playroom for adults with oversized stuffed animals, I sink into a giant shark with three heads. Music trickles from loudspeakers, yellow stars dangle from the ceiling on a royal blue ring. A deconstructed EU flag hangs from the ceiling, and the carpet is shaped like a broken heart featuring a divided map of the world. Is this political? Or just a gimmick? Or did the four designers of Sucuk & Bratwurst, who met in kindergarten, want us to be children in these crazy times? 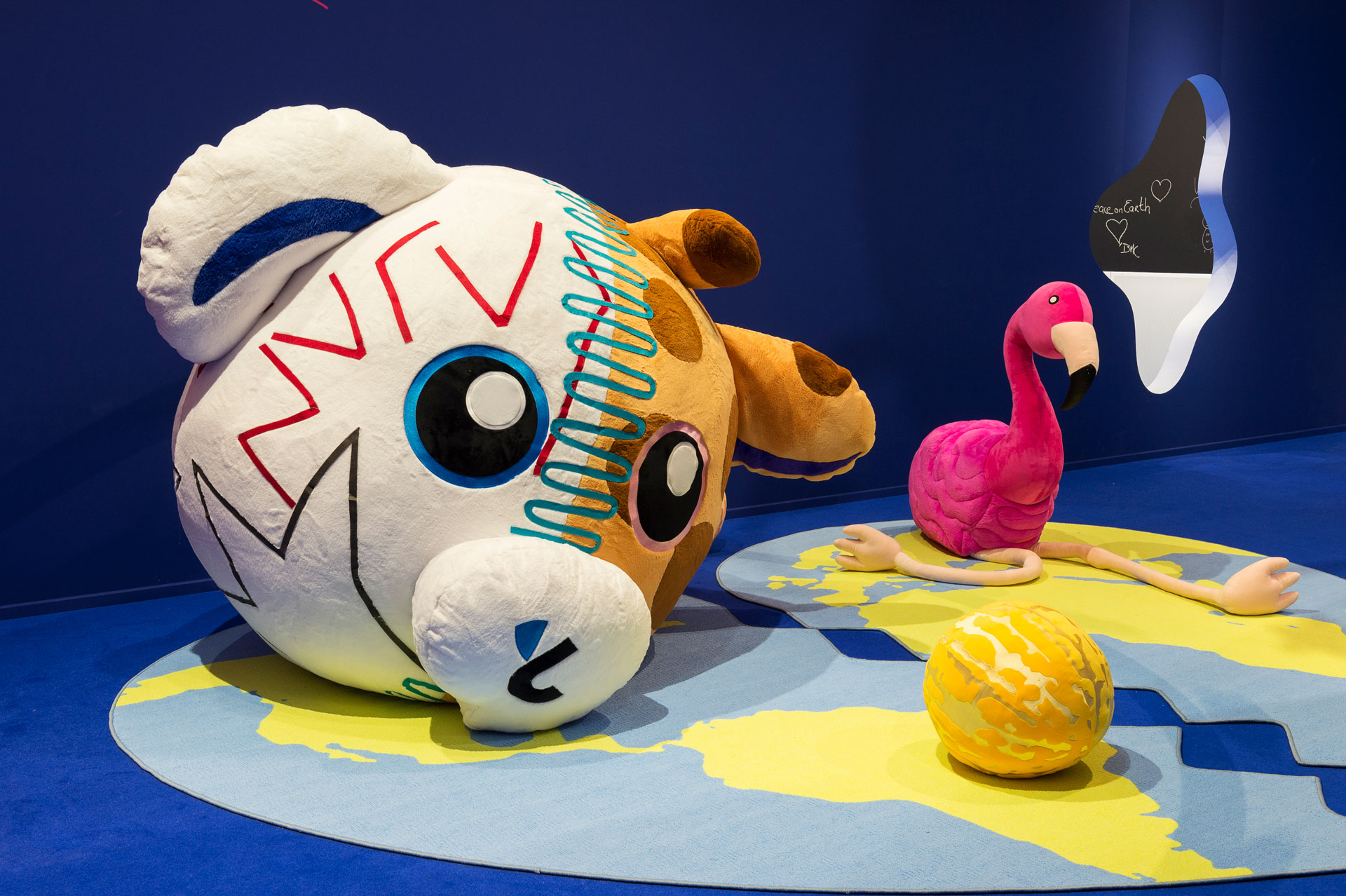 Political? Or just a gimmick? An installation by the four designers of Sucuk & Bratwurst.

Design can do much more

The other total spaces also raise questions and unsettle the viewer by confusing familiar dimensions. In the space created by Luftwerk, a medley of colours and light generates spaces where there is actually a wall. In Soft Baroque, whose space deals with the White Cube, I browse through a catalogue of unusual gallery tools. These include a post-passive-aggressive bench, which, equipped with balls and cones, is probably not very practical. A chair styled in the Fred Flintstone look turns out to be extremely uncomfortable. Moreover, a thick marble slab suspended from steel cables swings above me. On the edges of this unstable ceiling hangs a net that is constantly shifting and also tilting the walls of this designed room. This isn’t pleasant, but interesting. Because it shows that much more than the usual normality and the rooms we know would be possible.

An infinite number of infinite spaces

I eventually find total immersion — one of the keywords describing “Total Space” at the information booth — in the octagon created by Zurich-based architects and designers Trix and Robert Haussmann. The couple has built an octagonal cabinet of mirrors according to plans by Leonardo da Vinci. In this wonderful chamber, I multiply at the same time as the room. I swing my arms around me. Exactly the same thing happens behind, in front and next to me in an infinite number of infinite spaces. Past, present and future become one here, simply by virtue of the correctly positioned mirrors. Outside in the entrance hall I google “Total Space” on my mobile. What did someone write with chalk on a blackboard in one of the exhibition rooms? “Je ne comprends pas trop, mais c’est sympa”.