The myth of man 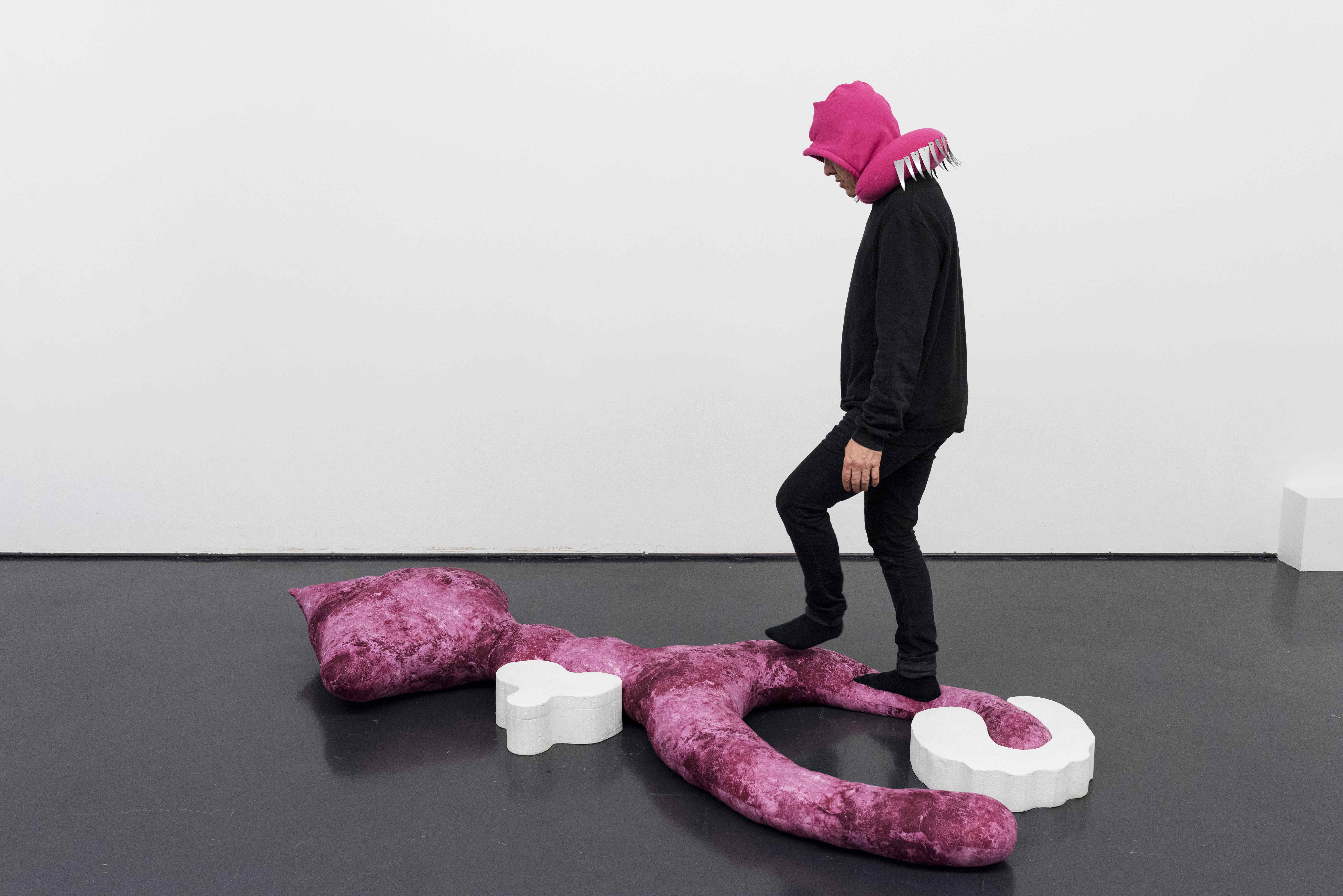 The strong man with pink nails: for artist Nicola Genovese this is by no means a contradiction. His work explores the myth of man as well as the fragility of constructed masculinity and opens up a space in which to reflect on the new contemporary masculinity.

Gianna Bärtsch: How do you define masculinity?
Nicola Genovese: “Masculinity” doesn’t exist in the singular. But in speaking of masculinity, we both validate such a notion and reaffirm that whatever deviates from it is unmanly. My exhibitions and performance seek to address the shades of “traditional,” white, heterosexual masculinity. From my perspective, that of a male adult born in Italy, I take Italian masculinity as an example of the most clichéd form of masculinity and try to engage with my audience.

What do fabric, metal and ceramics have to do with masculinity?
As a sculptor and artist, I explore the ambivalence of materials and combine them into abstract sculptures. Leggings nestle against metal, a cushion tries to enter into relationship with ceramics. Hard meets soft, fragile encounters unbreakable. During my performances, sculptures are activated, become costumes and props and reveal the ambivalence of masculinity, so as to make the entire construction teeter on stage. 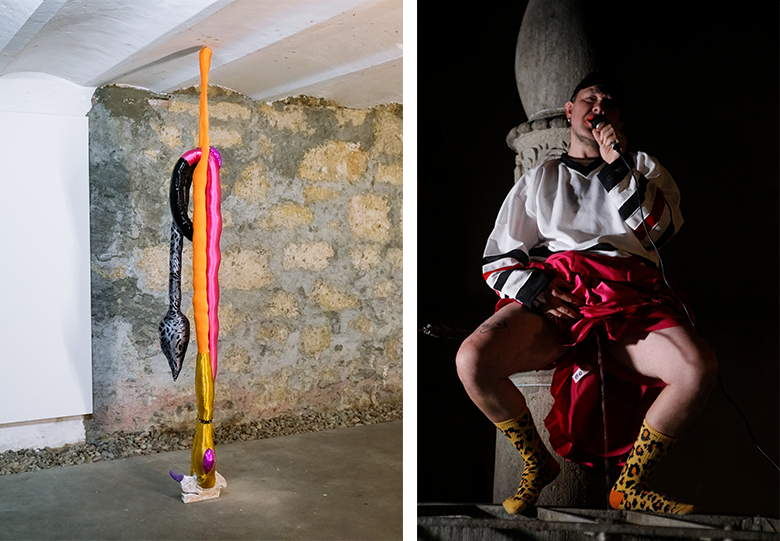 Left: I tear me down rather than saying I need you *1, 2020, espace libre Visarte, Biel/Bienne, Photo: Philip Frowein. Right: S.H.T.F., the second chapter, 2019, Cabaret Voltaire, Zürich.

How should I imagine your performances, which take place in theatres or exhibition spaces?
I develop parodic characters and slip into the role of the stereotypical white heterosexual man who wants to break out of the clichéd male role. At one moment, I behave like a macho man, shortly afterwards I move in a way that is perceived as “emasculating.” But just because I am dressed in pink, I am no less dangerous or less violent.

Is masculinity in crisis?
The crisis of masculinity exists as little as masculinity does. That’s why my projects place “masculinity in crisis” in inverted commas and thus view it as a constructed concept. Claiming to be in a crisis only serves to regain more power. In my eyes, the word crisis is linked to a specific turning point that ultimately initiates change. This is where my art starts.

How do audiences react to your solo performances?
I create a space of awkwardness, irony and seriousness. My performances demand full attention — leaving no room to sip prosecco. The irritation lingers, but the feedback is positive. 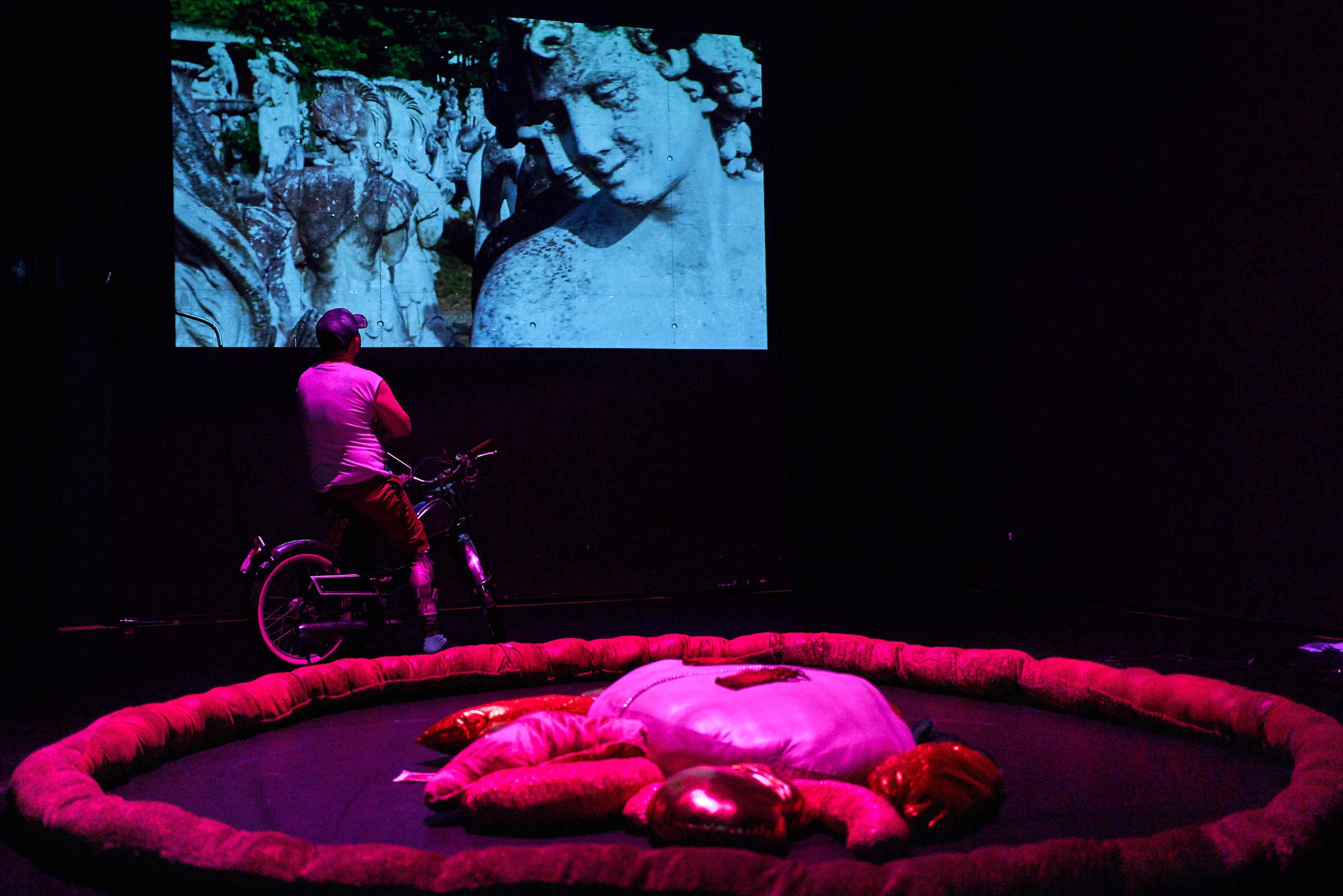 Nicola Genovese, born in Venice in 1971, completed his Master’s in Fine Arts at Zurich University of the Arts in 2017. He is an artist as well as a mentor and technical assistant at ZHdK’s Bachelor and Master Fine Arts. He is currently doing his PhD on “White masculinity in crisis through the frame of visual and performance art” at University of the Witwatersrand, Johannesburg, South Africa. www.nicolagenovese.org
Take a seat, press play and immerse yourself in Nicola Genovese’s performance.
Gianna Bärtsch is a project manager at ZHdK University Communications.
Teile diesen Beitrag: