Computer scientist, light artist, founder of an artist collective: Florian Bruggisser likes to think outside the box. As a research associate, he teaches Interaction Design and researches at the Immersive Arts Space. A portrait of a curious person.

“Ping” — “Ping” … one after another, students dial into the Zoom seminar on “Physical Computing.” Florian Bruggisser, wearing a shirt and Apple earphones, shares his screen. Live he writes the code for a circuit, while the seminar participants plug in their analog toolkits. Will the LED light up? “Programming is first and foremost a craft,” he says. “It’s not easy at first and often dry. But even the basics enable developing great things.” He shows the students his installation “åben”: gates in the dark forest start glowing as soon as someone approaches. Mystical and beautiful. “In the end, even these are just simple circuits.” 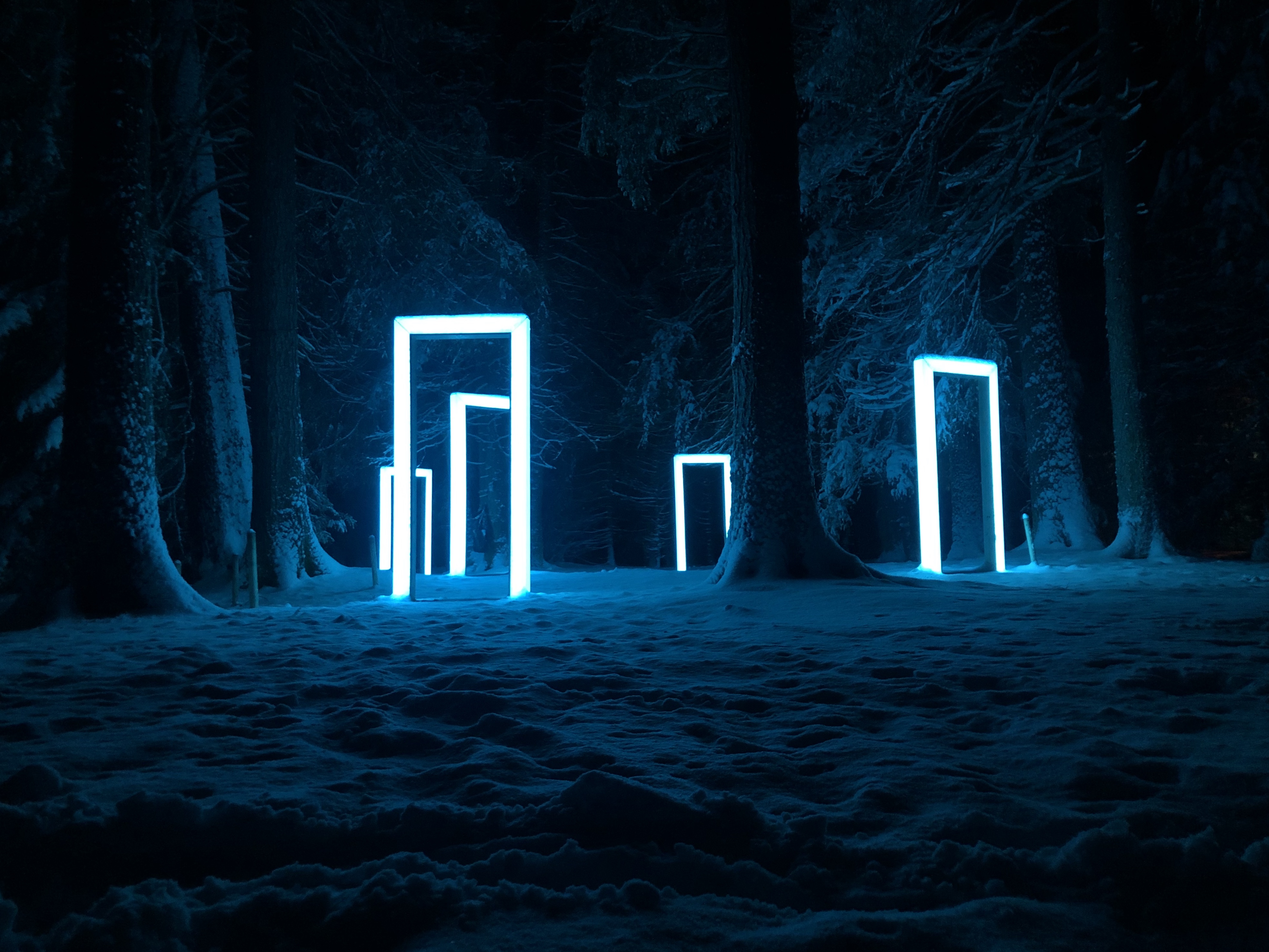 “Programming is first and foremost a craft.”

Florian wants to convey the joy of creative coding to students. “Programming is a design process that the students go through, that I support and whose outcome can be aesthetic or even artistic — but doesn’t need to be.” “Interaction designers are interfacers and bring together the most diverse fields: technology, industry, design, psychology. You need to look into other worlds and make contacts.” Thinking outside the box is as important to him as exchanging ideas with students: “If they find something exciting, I like to flip the classroom, and go for it.”

Florian grew up in a family of teachers. “School frustrated me; it wasn’t able to awaken my interest.” That changed when he trained to become a computer scientist. “From that point on, I didn’t have to swot anymore — I literally soaked in everything.” Next, he did a bachelor’s degree in computer science at the University of Applied Sciences Northwestern Switzerland. He found his way to design through some acquaintances, with whom he implemented his first simple projects. “We set up a beamer at parties and projected things onto the wall,” he recalls. Their work made the rounds, and was followed by commissions for exhibitions and festivals. In 2015, they founded the “bildspur” collective, which develops interactive lighting solutions and installations. At the light art festival “Zauberwald Lenzerheide,” they met some interaction design students. Soon afterwards, Florian enrolled for a master’s degree at ZHdK. 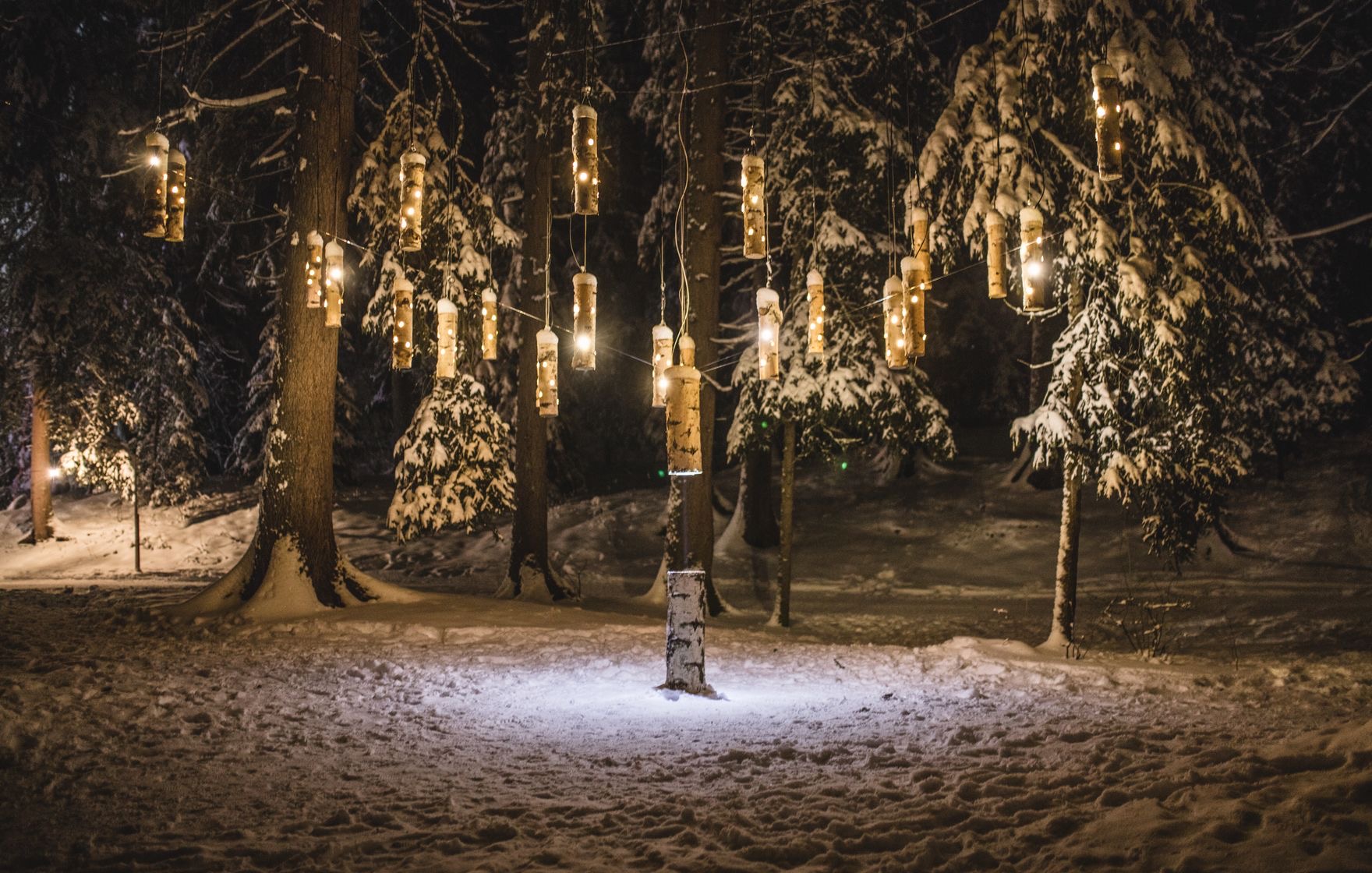 At the light art festival “Zauberwald Lenzerheide”: “Silva” (Latin for “forest”) makes the vulnerability of the ecosystem tangible.

“When I walked through the Toni Areal for the first time, a new world opened up to me.”

In 2019, he received the advancement award of the Department of Design for his master’s thesis “Deep Vision.” His initial question was: How does a machine perceive its environment? “Some people find the iPhone’s face recognition feature or the self-driving Tesla exciting, others frightening. I want to give a better idea of how these machines see.” Florian encourages his students to engage with new technologies. “But they need to realize what using technology can mean.” Florian has been teaching at ZHdK since 2019. He found the transition from student to teacher easy. “I was given a free hand from the outset, which I have really appreciated.” At the Toni Areal, he “scuttles” back and forth between research and teaching. At the interdisciplinary Immersive Arts Space, Florian is involved in a research project that creates 3D models of people for films and games. At the Interaction Design Unit, he focuses on teaching. “When I was eight, I wanted to become a teacher, later a game designer. Today, I’m close to combining both,” he laughs. At ZHdK, he appreciates the interdisciplinary approach and the hands-on mentality. “When I walked through the Toni Areal for the first time, a new world opened up to me.” If he has an idea, he doesn’t need long to convince people.

“I have no classical design training. I embrace whatever catches my eye.”

Florian finds his themes in books, podcasts and political debate. “I have no classical design training. I embrace whatever catches my eye.” One of his recurring themes is climate change, for example, in “Silva,” an installation made of illuminated birch trunks. Placing their hand into the light inside the trunk leaves viewers suddenly shrouded in darkness. They experience the vulnerability of the ecosystem and how quickly an outside intervention precipitates collapse. But he doesn’t merely want to criticize. People should also be allowed to experience beautiful installations. Through aesthetics, he wants to draw viewers’ attention to issues they were previously unaware of, he explains. All his projects have two things in common: light and interaction. “Light is my medium, and its combination with sounds and movements creates spaces.” Florian finds inspiration in the light artist Joanie Lemercier or in the works of Olafur Eliasson. “Eliasson knows how to attract people with visual aesthetics. He arouses curiosity and then tells the story. This is exactly what I want to achieve and convey to my students: Look, this is what creative programming makes possible.”

Florian Bruggisser (florian.bruggisser@zhdk.ch) is a research associate at the Departments of Design and Performing Arts and Film at ZHdK. He teaches Interaction Design and researches at the Immersive Arts Space. As a freelance artist, he realizes projects and installations in an interdisciplinary team.
www.bildspur.ch
Tessa Apitz (post@tessa-apitz.de) doesn’t do any teaching or research, but likes to think outside the box when writing texts, developing concepts and devising strategies.
Teile diesen Beitrag: