The king and the pirates 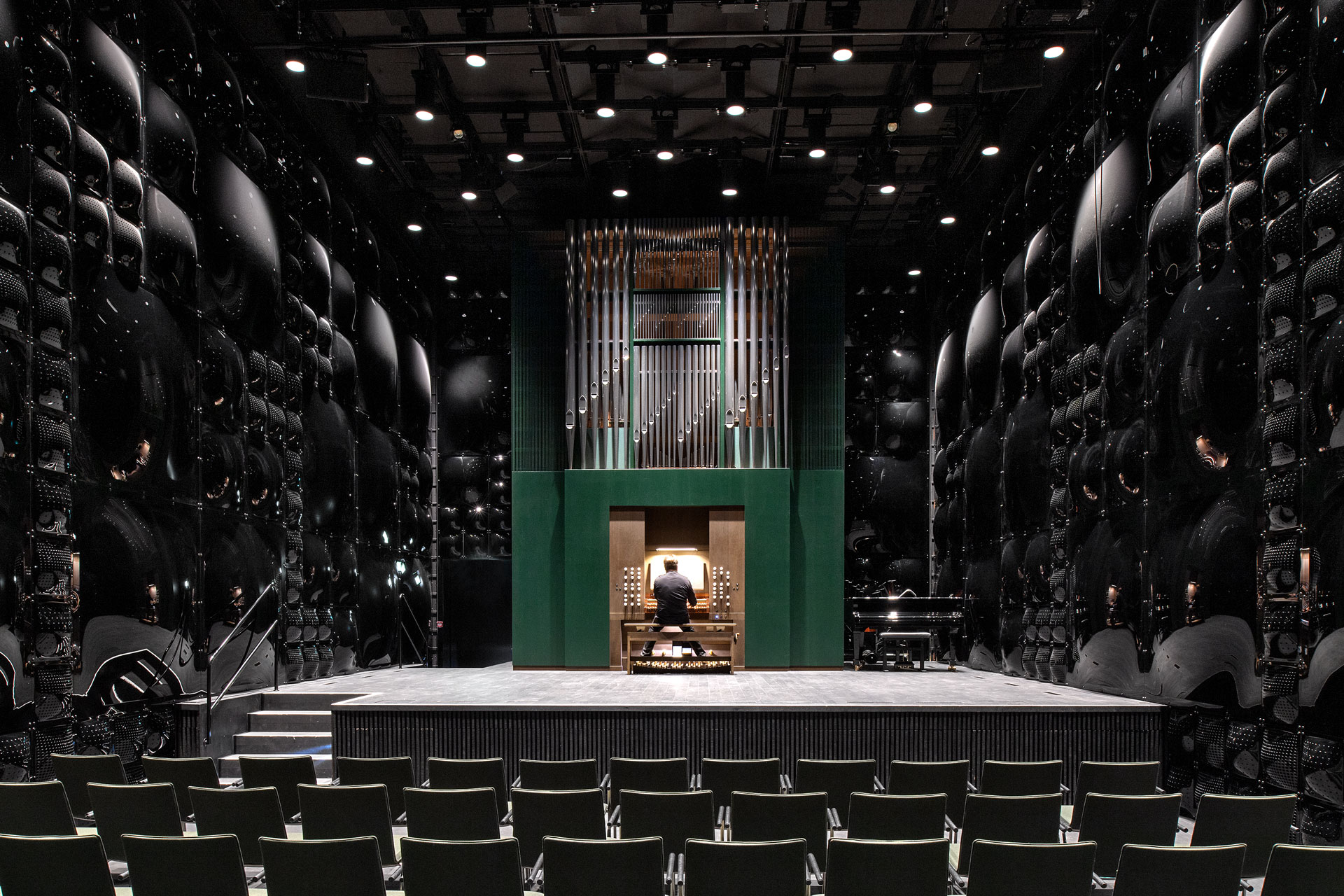 Like every organ, the organ at the Toni-Areal is unique. It has been specially adapted to the hall to ensure perfect acoustics. Photograph: Regula Bearth @ZHdK

The organ is not only impressively sized, but extremely complex and demanding construction-wise. It is therefore widely considered the king of instruments. And yet, it is no longer enthroned solely in churches. Even Hollywood makes its pipes sound. Organ lecturer Tobias Willi discusses long-established clichés and new pairs.

Lightning and thunder. Rain lashes the deck. The “Flying Dutchman“ navigates dangerous waves while Davy Jones, its captain, cheers on his crew. He takes to his cabin — plays the organ, a meter-high, smoke-breathing, coral-covered edition. This scene is from the Hollywood blockbuster “Pirates of the Caribbean 2.“ The sacred instrument has thus made its way from churches to movie theatres.

Actually, it should come as no surprise that popular culture has taken a liking to the organ. After all, no other instrument combines as many superlatives. Every organ is unique. Some are as small as a piano, others as tall as a two-storey house. The largest playable organ stands in a department store in Philadelphia, its 28,500 pipes reaching across seven floors. No other instrument blasts out its sounds louder than the organ. The Guinness World Record as the loudest musical instrument ever built is held by an organ in South Korea with 138.4 decibels, which corresponds roughly to the noise of an aircraft taking off.

Organs never simply stand somewhere accidentally. Duly fitting their nickname, “king,“ they are always assigned a special place. Traditionally, this was the church gallery. In line with tradition, ZHdK has also dedicated a special room to its organ, one of the main attractions of the Toni-Areal. Its black walls and light reflections make the organ hall a mystical oasis amid turbulent campus life.

Organ lecturer Tobias Willi has remained faithful to his instrument for over 30 years. “An organ places a whole orchestra under two hands and two feet.“ Mixing sounds, imitating the timbres of other instruments, playing up to eight octaves — none of this poses a problem for the king. “It’s like standing in front of the spice rack in one’s kitchen: Organ players can combine ingredients as they please,“ says Willi. 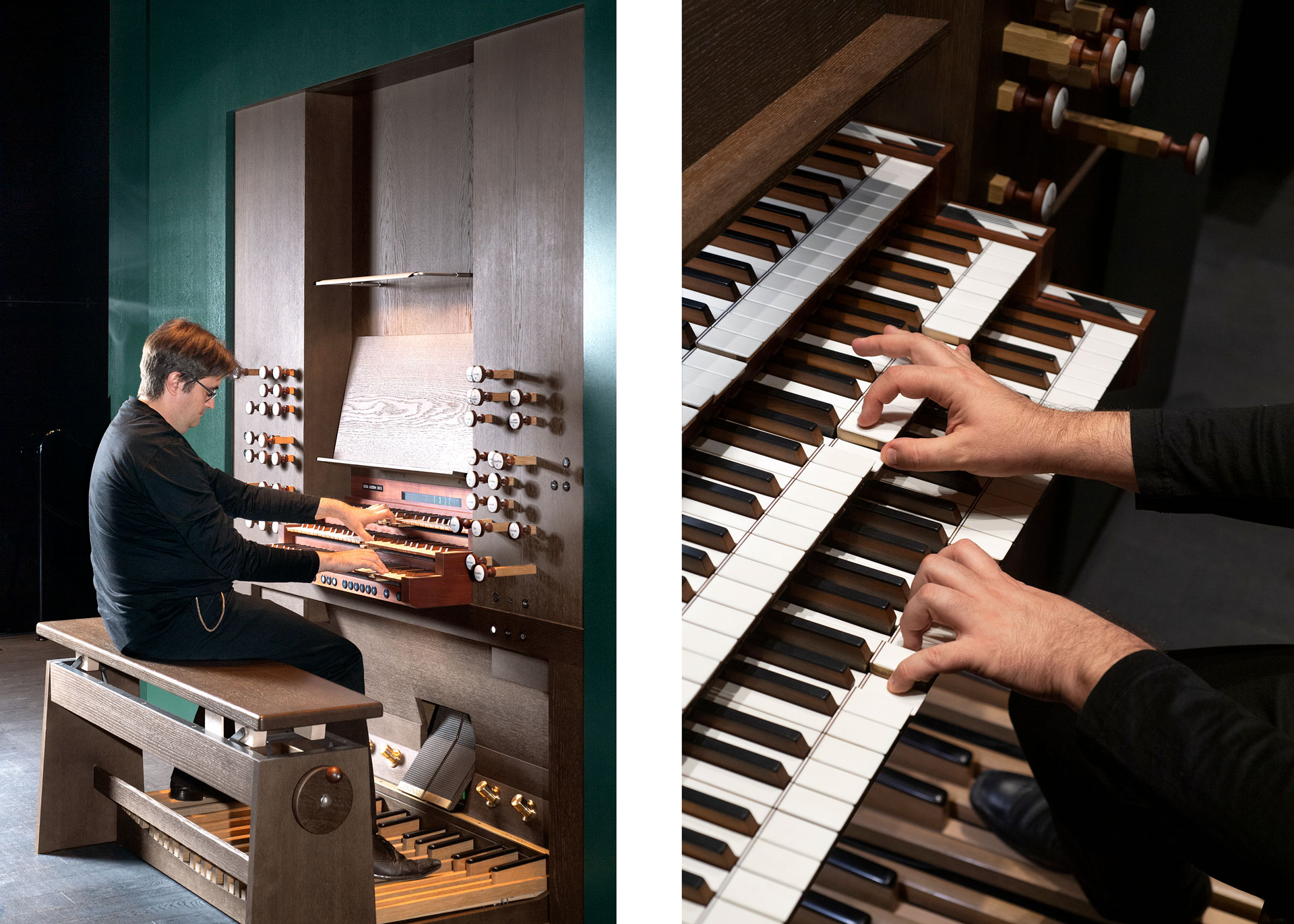 You have to make friends with an organ in order to play well – start a temporary love affair, says Tobias Willi. Photograph: Regula Bearth @ZHdK

Nowadays the organ is often presented in a very clichéd fashion. Davy Jones is not the only seafarer who sails the oceans playing the organ. He is modelled on Jules Verne’s Captain Nemo, who plays the organ in his submarine “Nautilus.“ Other eerie organists include the Phantom of the Opera or the murderous Dr. Phibes in his “Chamber of Horrors.“ Yet another example is “Yoko Tsuno et l’orgue du diable,“ a comic strip published in 1972 in which a huge organ serves as an instrument of torture with its deadly low frequencies. The favourite instrument of marauding pirates, cold-blooded murderers and even a torture machine: Why is the organ often connoted quite so darkly? Tobias Willi explains with a smile: “In popular culture, organists are often depicted as neurotic or psychopathic loners.“ One usually plays the organ alone, despite its imposing form. “This certainly fuels the image of the megalomaniac organist able to make a cathedral tremble.“

“Today, fewer and fewer people are attending church services regularly. Many of us are no longer familiar with the organ,“ says Willi. But he also sees advantages: “It gives us organists carte blanche, the freedom to try out the unexpected.“ Organists frequently employ this leeway: Organ meets modern ballet, organ meets saxophone, organ meets poetry … The list of new constellations is growing longer and longer — because these unusual pairs are very well received by the audience. Tobias Willi experiences this whenever he improvises live on the organ to accompany silent films. “People then realise that the organ doesn’t simply make booming noises — as someone once told me — at church services; there are a thousand delicate gradations.“ His longest performance lasted two and a half hours: “It was a ‘real slog.’ As an organist, however, you can take emotions to a whole new level.“

Tobias Willi (tobias.willi@zhdk.ch) is head of the profile in Church Music at the Department of Music and professor of organ and organ improvisation. He is also an active church musician, and since 2015 principal organist at Zurich’s Church of St. John.
Lea Ingber (lea.ingber@zhdk.ch) is a project manager at ZHdK University Communications.
Teile diesen Beitrag: