Music is my language 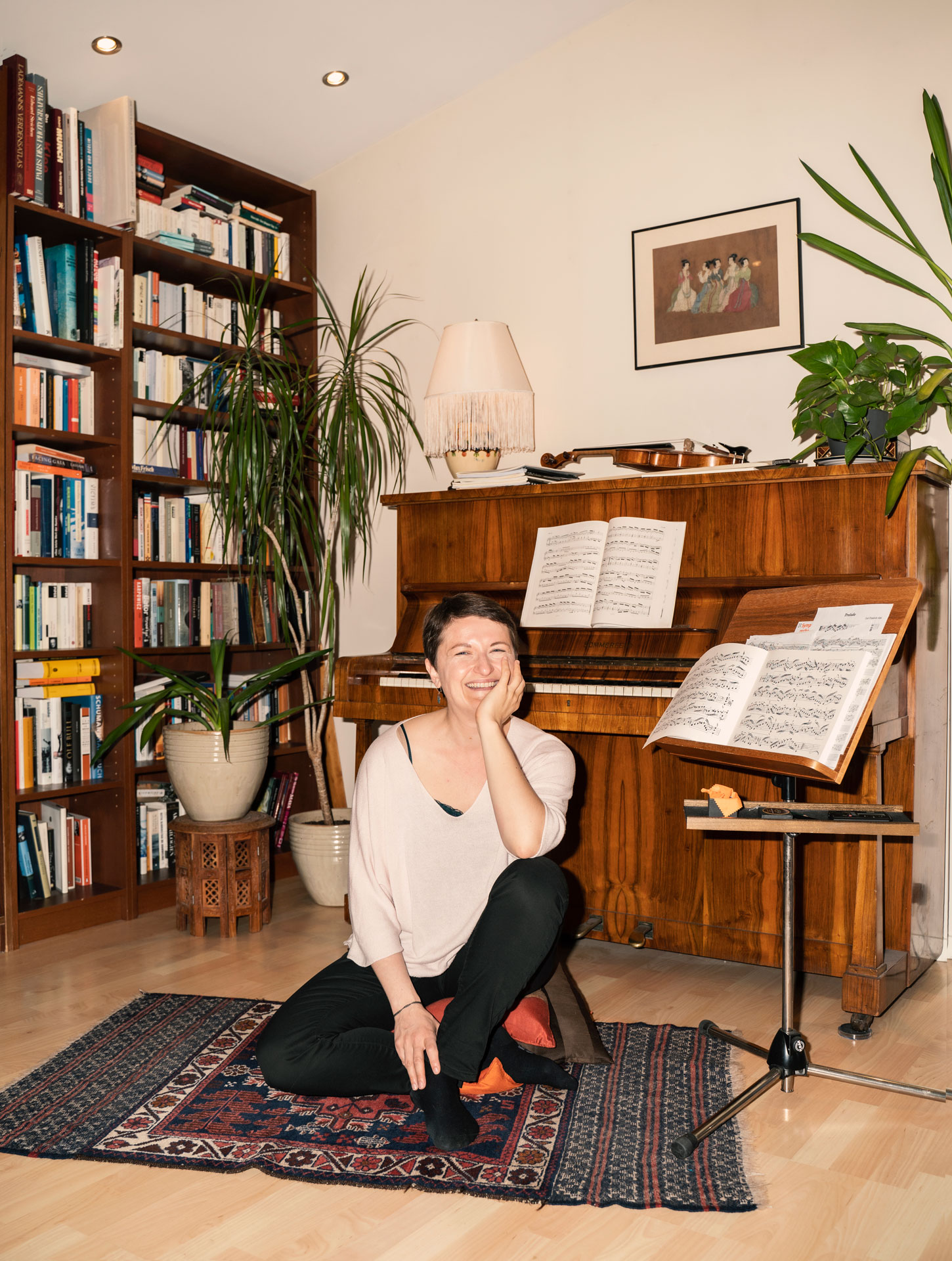 Just before relocation: Anna Gebert in her apartment in Trondheim in spring 2020. Photograph: Leikny Havik Skjærseth

In her eventful life, Anna Gebert has learned to embrace stage fright and to draw reassurance and comfort from music. Now she is coming to ZHdK as a principal violin lecturer. She is looking forward to the Toni-Areal, the “arts factory,“ where all the arts are simmering together and inspiring each other. A portrait.

You wouldn’t believe it. But Anna Gebert, who became a member of the Gustav Mahler Jugendorchester and the European Union Youth Orchestra at the age of 14, has held a scholarship from the Karajan Foundation at Berlin Philharmonic Orchestra, has spent two years on a Fulbright scholarship in Bloomington, Indiana, and has worked for many years as a concertmaster with European orchestras. Anna, a principal violin lecturer at Zurich University of the Arts since the summer, this very Anna Gebert has suffered from stage fright almost all her life. “Stage fright has at times wrecked my personality.“ Anyone who sees the 41-year-old, with her short hair, clear features and wide mouth from which comes a broad, open smile, can hardly believe it.

Now she knows: “You have to learn to embrace fear, to gain strength from it,“ she adds. In her training, psychological issues were taboo. That is completely different today. “Being a teacher also means being a psychologist, inspirer, mentor,“ she outlines her teaching concept. In class, she speaks openly about her own experiences, thus helping many students to cope with their stage fright. Perfect practice techniques are integral to her teaching — historical performance practice as well as contemporary works. Her pedagogical approach also includes body awareness, to prevent injuries, and the ability to listen to oneself critically to recognize weaknesses. She has had fantastic teachers, she says: Magdalena Rezler in Freiburg im Breisgau, Ana Chumachenco’s master class in Munich, Miriam Fried or Stanley Ritchie in Bloomington. Ritchie opened up a completely new field for her by playing the baroque violin. “For a while I played only on gut strings, as I was so fascinated by feeling the imperfection of tickling, other timbres and overtones out of the instrument.“ She still plays in baroque orchestras, but is curious, inspired to constantly expand boundaries and discover new things. “I don’t want to limit myself. There are far too many beautiful things that cannot be played on gut strings.“

Anna Gebert heard music already in her mother’s womb. “At home it was always: ‘You either become a musician or a dustman.’ There was nothing else.“ She laughs and talks about her uncle who became a dustman and was very happy. But the rest are all musicians. Her father, Jerzy Gebert, is a pianist. Her mother, Grazyna Zeranska-Gebert, a violinist. Her brother, Alexander, a cellist.

The Toni-Areal as a bubbling art factory

Only retrospectively did she understand the extent to which music had offered her reassurance and comfort. She was born in Warsaw in 1979 and her family moved to Finland merely a year later. For 13 years, involving eight relocations, the saying was, “We’re going back.“ — “We were foreigners in Finland, living in isolation. That’s when music became my language, with which I could always communicate.“ She spoke this language in chamber and baroque orchestras and opera houses. She discovered the role of the concertmaster and served Gürzenich Orchestra, Cologne’s Symphony Orchestra, as an assistant concertmaster for about four years. On mountain tours amid the vastness of Norway, she discovered a new sense of happiness, and fell in love with nature. She moved to Trondheim, became a lecturer at the NTNU Department of Music and first female concertmaster of Trondheim Symphony Orchestra. Now she’s moving to Zurich. The city’s reputation as a city of art, the interdisciplinarity and the high standard of students and professors at ZHdK have attracted her. “At the Toni-Areal, you’re in an art gallery, an art factory,“ she says, impressed. “In it, all the arts simmer and bubble together, inspired and enriched by one another.“ She knows and appreciates her colleagues Ilya Gringolts, Alexander Sitkovetsky and Sergey Malov from performing together at Kuhmo Chamber Music Festival in Finland. She is excited about building up a class as a professor and once again living “in the middle of Europe.“ “Baroque music is also well represented in Zurich. This is certainly not a disadvantage.“

Prof. Anna Gebert (anna.gebert@zhdk.ch) teaches violin (Major) on the Classic Profile at the Department of Music.
Valeria Heintges is a freelance journalist and copywriter. She has loved playing with language all her life and, once in a while, amateurishly playing the clarinet.
Teile diesen Beitrag: