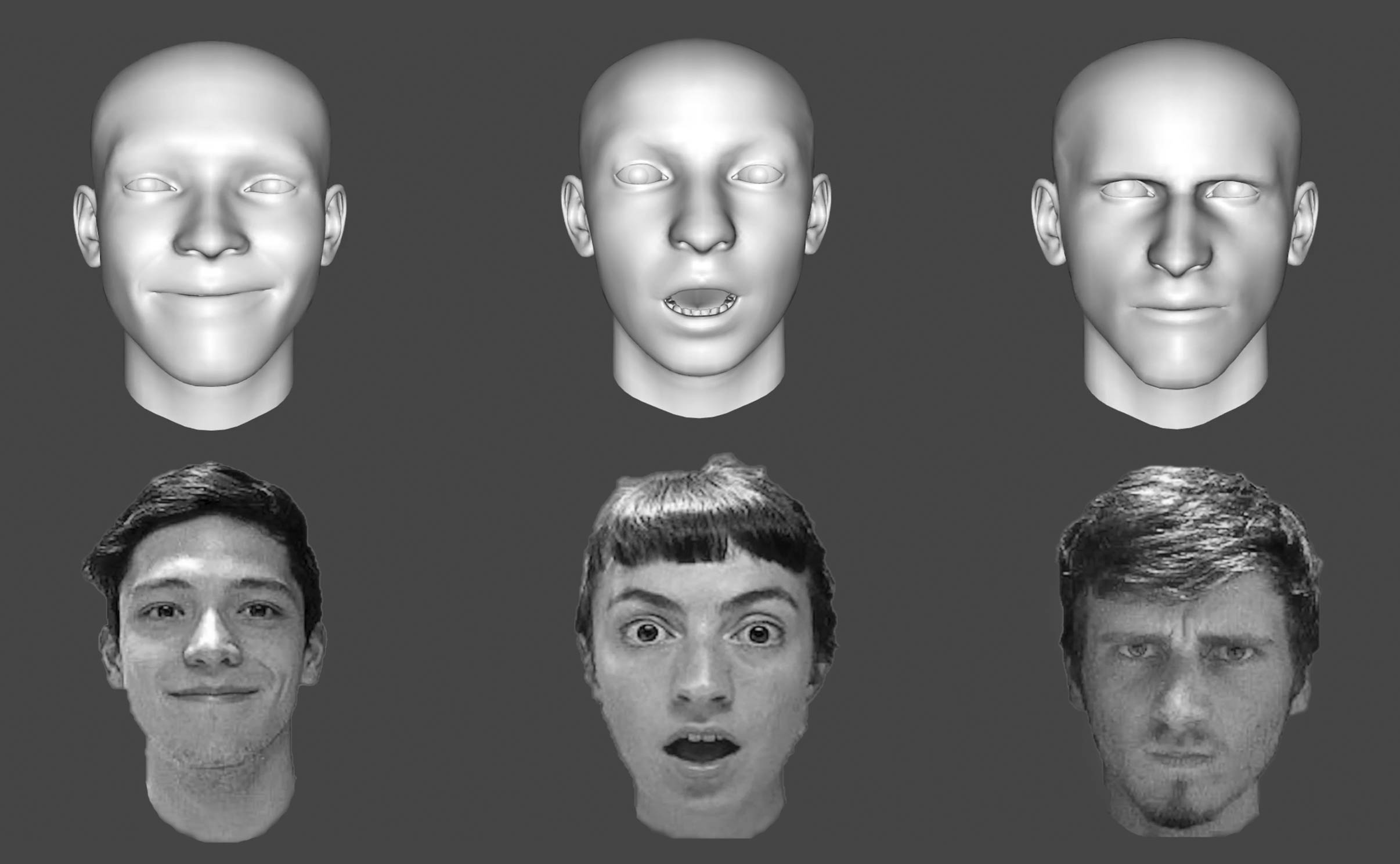 It is fair to say, “It’s a match!” ZHdK’s Institute for the Performing Arts and Film (IPF) and the Swiss Epilepsy Clinic have maintained a research partnership for over 15 years. Acting and neurology: What constitutes this “unusual pair” and how jointly researching emotions even led to a world tour. An interview with IPF director Anton Rey and the medical director of the EPI Clinic Zurich, Thomas Grunwald.

“How do you know I’m really me? I could be an avatar with Anton’s voice and face. Would you notice a difference?” dramaturg Anton Rey asks me at the beginning of our zoom interview. Which leads us straight to the heart of things. Because it is precisely such questions — for example, how our brain processes the facial expressions of actors and their avatars — that are central to “Actor and Avatar,” a research project that Anton Rey and Thomas Grunwald are completing at the time of our interview. The two researchers can already reveal some initial results. But first they discuss what brought neurology and acting together 15 years ago and what still drives them today: emotions.

“Epilepsy surgery is interested in studying emotions because we do not want to disrupt emotional life or social cognition through surgery,” explains neurologist Thomas Grunwald. Surgery is often performed in a brain region that is responsible for memory formation in a complex interplay with emotions. “The more we know about it, the better we can avoid disaster,” says Grunwald. We need professionals able to represent emotions as research partners. Who would be better suited than actors?

And yet, convincing them was not straightforward: “At first I thought: Why should we bother with doctors and neurology?” Rey recalls, amused. Eventually, however, their genuine epistemological interest connected the researchers and their different worlds. Their initial questions were: Is it possible that contrary to neuroscientific theories, actors can “summon” feelings and actually “feel” them? And if so, how might this be measured? In order to trace the neuronal basis of emotions, they dared to conduct an experiment.

Theatre in the brain scanner

Together with neuropsychologist Hennric Jokeit, Rey and Grunwald invited acting students and well-known actors such as Hanspeter Müller-Drossaart or Stefan Kurt to audition in the brain scanner. The actors performed the same text twice: once “cold,” i.e. emotionless, and once filled with emotion. Would functional magnetic resonance imaging (fMRI) reveal a difference in brain activity? The result was astonishing: When the experienced actors summoned emotions, the emotional centres in their brain, normally beyond conscious access, exhibited clear activity. In other words: Professional stage artists — in contrast to students — not only remember emotions, but also feel them. “That was a Eureka moment!” says Thomas Grunwald.

Around the world with Romeo and Juliet

Their findings led the researchers around the world. They were invited to give lectures in the USA, Brazil, India and China. Their blending of theatrical performance and lecturing inspired audiences worldwide: They had local actors rehearse the balcony scene from “Romeo and Juliet” — and entertainingly debated the dramatic versus medical background of emotions. In the end, if the Romeos and Juliets succeeded in moving audience members by activating their emotions, Rey and Grunwald were delighted: “Ultimately, our aim is to demystify art, not to disenthral it.”

Now, several publications and many performances later, comes “Actor and Avatar.” The SNF-funded project also involves Dieter Mersch (alongside Thomas Grunwald and Anton Rey). The director of ZHdK’s former Institute of Theory is exploring the philosophical aspects of the topic. A book with the joint research results will soon be published.

One of its main questions is: Even if avatars are becoming more and more “real,” are there differences between actors and avatars that technology — no matter how advanced — will never be able to catch up with? For instance, an authenticity that makes humans irreplaceable? Rey says that neurology is needed to measure what happens in the brain when audiences process the facial expressions of actors and their avatars.

Their interest is practical: Avatars enable investigating the processing of emotional facial expressions in order to find out which brain regions function in patients and which do not. “We can programme avatar faces at the push of a button and easily change individual parameters during examinations,” Grunwald explains. Avatars are easier to control than actors. However, fMRI measurements show that emotions foil this plan. “We haven’t finished evaluating, but everything suggests that an agitated expression — such as fear or frustration — on a human face activates the observer’s brain much more than the same expression on their avatar’s face.” Hence, actors must continue to be used when working with patients, because when it comes to emotion recognition, human faces seem to be more effective. Or as Grunwald says, “Avatars don’t cut the mustard.”

Why is that? The answer to this question is still waiting to be found. Luckily, after 15 years of joint research, the “unusual pair” has not yet become bored with acting and neurology. 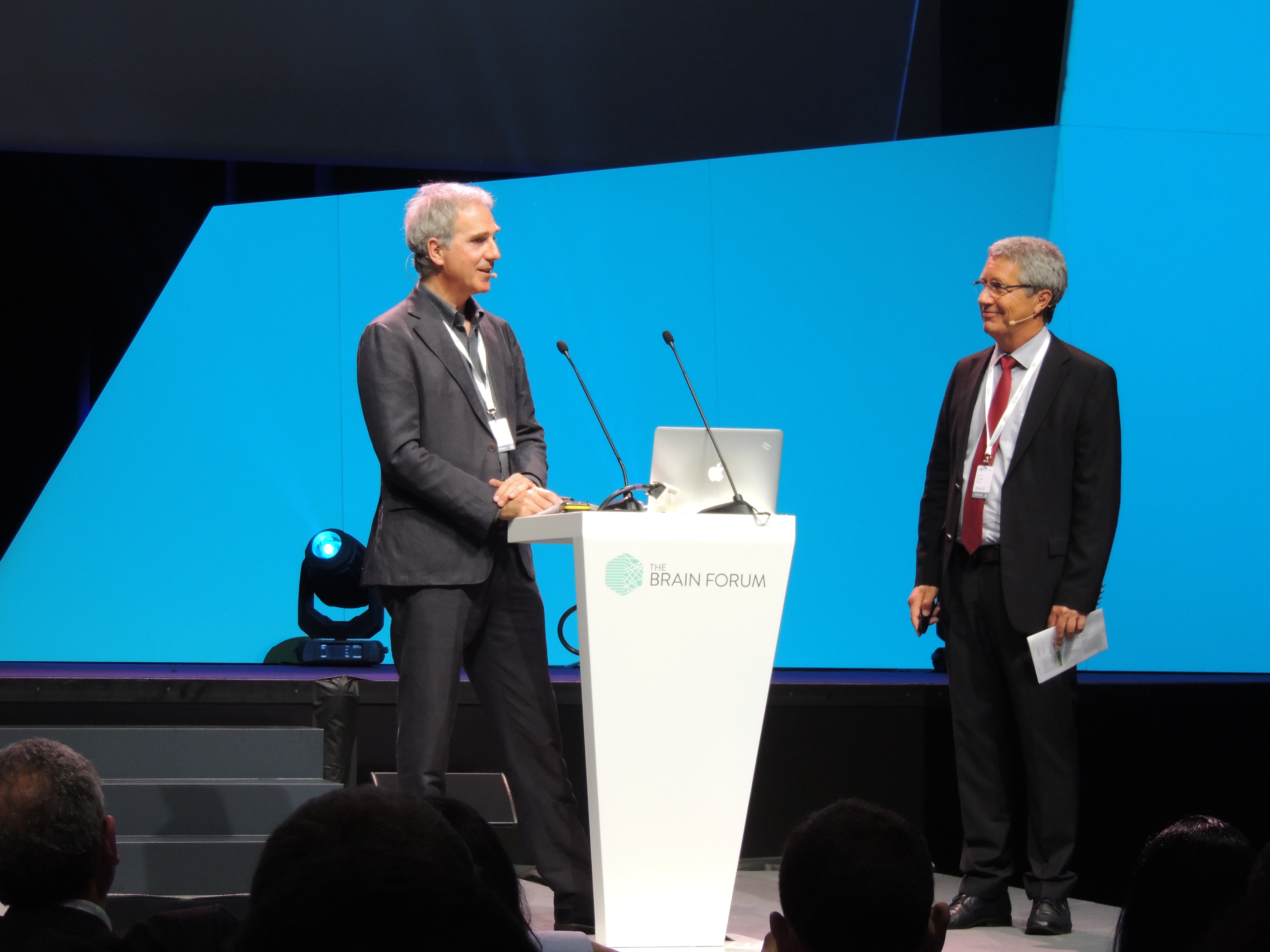 Anton Rey (left) from the Institute for the Performing Arts and Film and Thomas Grunwald from the Swiss Epilepsy Clinic at the Brain Forum at EPFL. Photograph: IPF

Sophie Käser (sophie.kaeser@zhdk.ch) is responsible for communications at the Department of Performing Arts and Film at ZHdK.
Teile diesen Beitrag: