Directing is also a bit like Rock ’n’ Roll 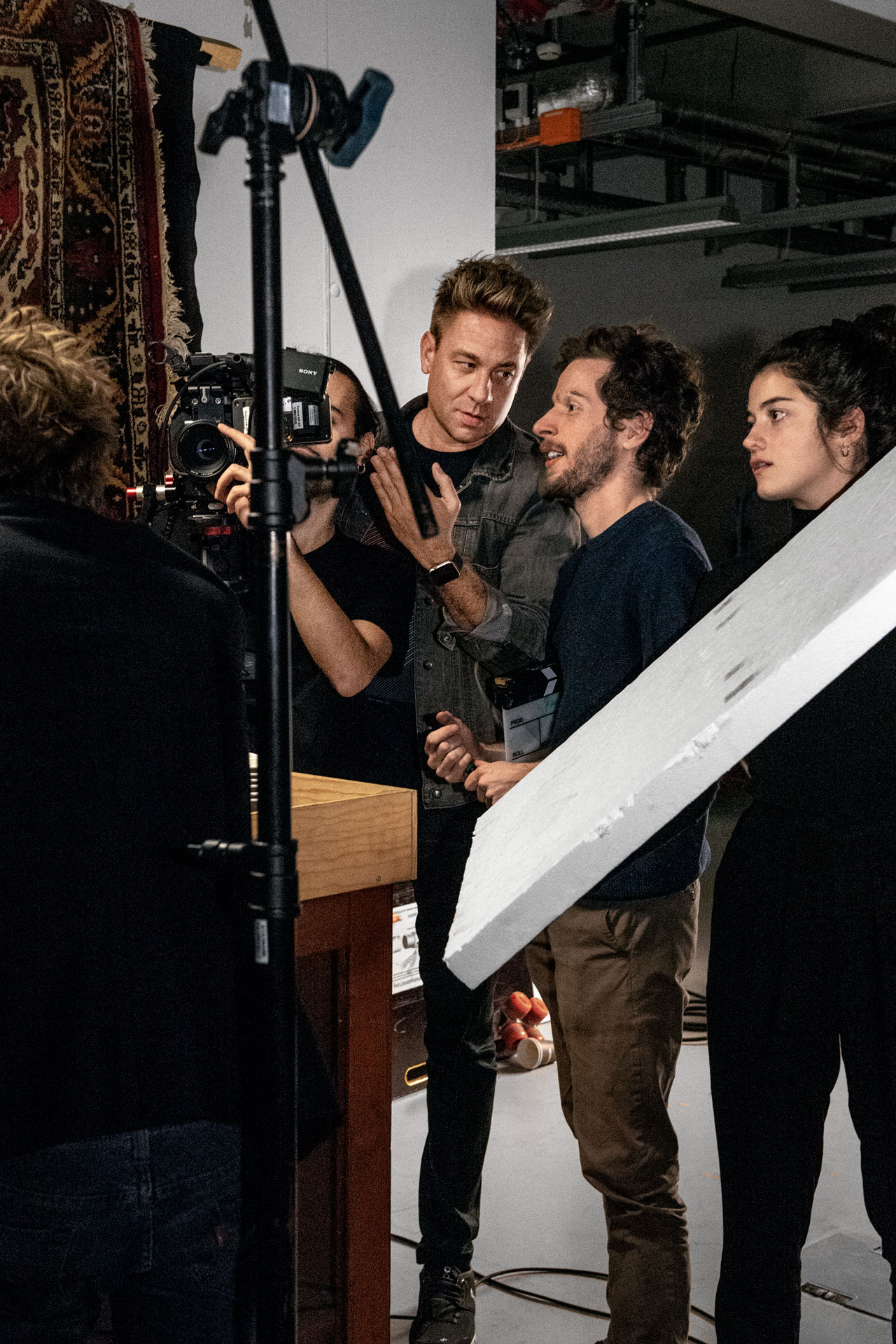 Tom Gerber is a film director, ZHdK lecturer and very bustling. The best chance of meeting him at the moment is on a film set. In a methods seminar, he helps BA film students implement various screenplay scenes to hone their visual language. A portrait.

An artificial grass carpet in front of a brightly coloured bench. Lights have been mounted to illuminate the set. A young woman adjusts the focus of her camera, a man writes the next take on the flap and holds it in front of the lens. Another woman looks concentrated at the screen. She holds her breath, her gaze rigid, only her lips move briefly: “And … please!” Tom Gerber, ZHdK lecturer and head of the “Découpage” methods seminar stands beside her spellbound. The scene begins. An actress wearing a grey tracksuit and a glittering sports jacket repeatedly pokes the bench with a stick, out of boredom. She laughs, gloatingly, and turns her head towards a man, her best mate. Or was. Because the guy wearing the casual leather jacket and the now well-trained body is no longer the country bumpkin of the past.

Living in the image

“Cut,” says the young woman in jeans and an orange shirt relieved. Her name is Lena, a third semester BA Film student and one of the seminar participants. For three days, she and her fellow students are taking turns directing, shooting or managing the sound. She walks across to the set and discusses the scene with the cast. Gerber sits down at a distance, deliberately in the background, and lets Lena practise the director’s role. The actress asks Lena: “Is it fine if I stay seated?” Maybe it would be better if she came back onto the lawn faster after one sentence? How should she feel doing that?

Gerber considers giving a good answer to this last question one of a director’s important qualities. “She must be able to convey an image to the actress into which she can project her feelings and thoughts.” Besides teaching at ZHdK, Gerber works as a freelance director for feature films and TV series. He knows how important communication is on the set, as much as that things sometimes get hectic. “We often rearrange scenes at short notice because we only realise while shooting that things don’t work the way we im-agined they would in theory,” explains the 42-year-old. This makes the practical experience gained in the seminar so valuable. “We can afford something to go wrong, can take our time and experiment.” Working with students always benefits his own directing. Sometimes he even takes students along to work for one of his television productions during the semester break, for instance, as script supervisors, responsible for ensuring no continuity errors occur. “My students can then see that I sometimes also get a bit jittery on a shoot,” he laughs.

Gerber has been lecturing at ZHdK’s Department of Performing Arts and Film since 2007, when he returned to where he learned his trade. His graduation film, “Bats in the Belly,” a humorous vampire story, even made it to Cannes. Yet his passion for film was by no means clear from the outset: after graduating from high school (where he focused on music) and a trip to Los Angeles, the Lucerne-born director decided to study English at the University of Zurich. He switched to film because of a class about “Reality as Seen on Television.” “I was thrilled that people at a university were talking about my favourite films. That’s when I realised: I want to study film,” he explains how things fell into place. When he thinks back to his time as a film student, he remembers moments that motivated him. “When my lecturers told me, ‘That won’t work,’ I wanted to prove it would,” he says with a challenging smile. He adds: “I am fully aware that my students sometimes ignore my advice. That’s fine. Our own experience is invaluable.”

Gerber considers it a privilege to support young people on their career path. At ZHdK, film students become acquainted with the whole range of filmmaking. Gerber sees this broad orientation as an opportunity for the future. He is convinced that “there will be more and more transmedia projects, and that students must be fit for all fields.” He exemplifies the versatility he demands of his students. Last summer, together with ZHdK lecturer Claudio Bucher, he ran a summer school organised by Shared Campus, the international teaching and research platform, and participated in the “Virtually Real” project funded by the Swiss National Science Foundation SNSF, and hosted by ZHdK’s cross-departmental Immersive Arts Space.

“Once more,” someone says on the set. Before everyone returns to their position, Gerber turns to the student-director and comments on the camera image: “It’s great that you’re closer up.” He is espe-cially pleased that the student has come up with this idea herself. The assignment that Gerber gives his students is very close to their future professional life. The students need to interpret a scene in a screenplay they have not written themselves. Gerber knows this challenge only too well. The final episode of the TV crime show “Tatort” (shot in Lucerne) was his most recent director’s assignment. The screenplay was written by others and the production conditions were predefined. This makes it even more important for a director to gain the trust of the cast and crew and be able to convey his or her ideas quickly and clearly. Gerber sums up the challenge: “The director needs to develop a personal stance. The decisive factor is how we answer the question: Why will a film change if I make it?”

He consults his watch. The students have more than run over the time limit for the first scene. Gerber takes things calmly. He knows that a lot of material has been shot that cannot be edited. This, too, is part of professional reality. “Well, then the next two scenes are going to rock ‘n’ roll,” he says and claps his hands.