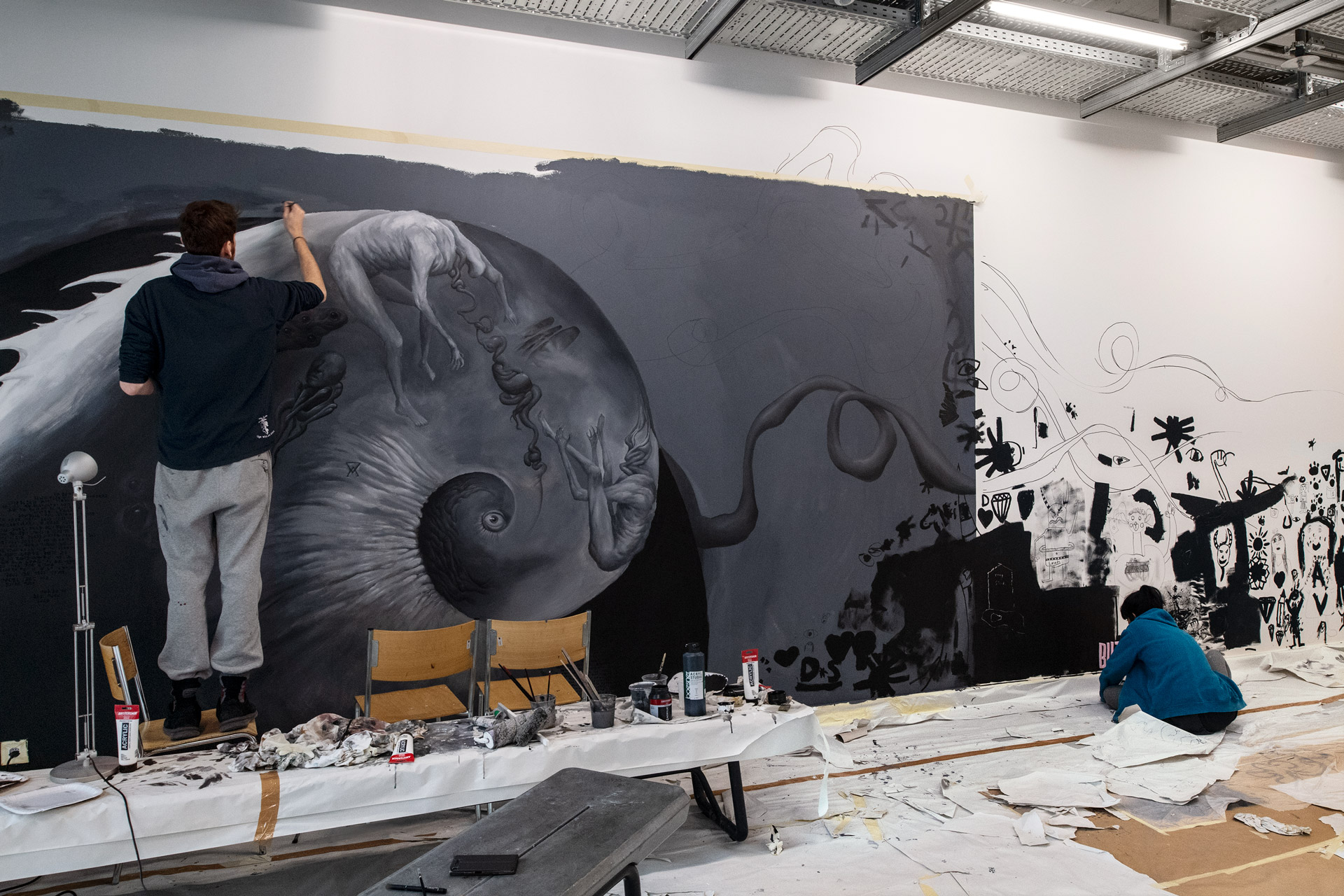 Looks like a snail’s shell. A work of art co-created by students and children. Photograph: Regula Bearth © ZHdK

They leave some cold, but fire up others: raw, white walls. They stood at the centre of the recent “Art & Wall Design” module at ZHdK. An experi-ment with a colourful outcome.

A subtle scent of fresh colour wafts through the corridors of the Toni Campus, even if this is nothing special at Zurich University of the Arts. Nevertheless, something is different: the bouquet of earthy emulsion and pungent solvent-based paints is not coming from the studios, but from somewhere else. All of a sudden, the once white walls of some corridors on level 7 appear in a variety of colours.

These walls are steeped in history. Ever since ZHdK relocated to the Toni Campus in 2014, the building’s white walls have provoked — and have been appealing for design. Basically, students from all departments may freely stage certain walls. For instance, uniform pastel colours set the tone along the corridors of Zurich Dance Academy, while the Department of Music is close to nature with its insect wall. Permission is required for some areas. Thus many a wall has become the silent witness of longstanding discord — once white, it became colourful and then white again. Should they remain neutral, raw and white or become part of a degree course as projection surfaces? Discussion has continually revolved around this question, which the BA Fine Arts approached through the module “Art & Wall Design.” A total of 16 students took part.

Wall design for everyone, say the students

The module was run by the Zurich artist collective Mickry 3 (Dominique Vigne, Christina Pfander and Nina von Meiss). Their predominantly sculptural works are characterised by a critical attitude towards consumption and society and are often integrated into public space.

“It was an intense week,” says Dominique Vigne. The history behind the “awesome white wall,” as the module annoucement put it, preoccupied most of the participants. “Which explains why we took up this issue again, quite intensively in fact. Discussions focused on what distinguishes a white wall at an arts university from one in a museum or public space.” In street art, for example, it is the moment of creation that is particularly enriching for an artist, ac-cording to the students. They wanted to try out this approach to making art on the white walls at ZHdK. It was meant to be an experiment. There was also a consensus regarding uncertain changes, like those in graffiti art out on the streets. Thus the idea was born to create a huge collage where the different works would overlap. Old tags, once found here aplenty, were also supposed to experience a revival.

“One of the students’ key concerns was to open up and make wall design accessible to everyone,” says Dominique Vigne. “They explicitly refused to be the chosen ones granted special permission to paint the walls to the exclusion of others,” adds Christina Pfander. “We felt that if this wish was so important, then we should fulfil it.” Some white walls on level 7 were opened up for three days to anyone interested in joining the project. Children attending kindergarten and primary school were also invited “because they are still unbiased towards a white wall,” says Christina Pfander, explaining the thinking of the module participants

From white to black

It is Friday afternoon and only a few hours are left until the end of the module. Hip-hop music is heard from further back. At the end of the corridor, a wall has turned practically black. A huge something resembling a snail’s shell is becoming apparent. From it emerges a umbilical cord-like skein, which merges from the black surface into the white one and abruptly becomes abstract. Fabulous creatures, hearts or swabs painted with a few strokes can be seen. “Here the children reacted to our artwork,” says Reto Ritz, who worked on the wall together with Julius Jenny. Painting such a large surface was quite a challenge. “But we had a lot of fun,” they say. On the opposite wall, two giant black centipedes are coiling themselves round a showcase. Maria Krol, a BA Fine Arts student, is crouching on the floor concentrating on her artwork. The opening up of the module to anyone interested also attracted her. “I was on my way to the studio with my camera when I noticed what was happening here,” she says. “Painting isn’t really my thing, but getting involved is really special.”

The one-week “Art & Wall Design” module was also a unique experience for artist trio Mickry 3. The module leaders are very satisfied. “This, for example, could go straight into a museum,” says Dominique Vigne pointing to a wall on which a collaged eye, nose and mouth are surrounded by abstract paintings. One thing is certain: “The week wouldn’t have produced such powerful work if the students hadn’t wrestled with the topic.” 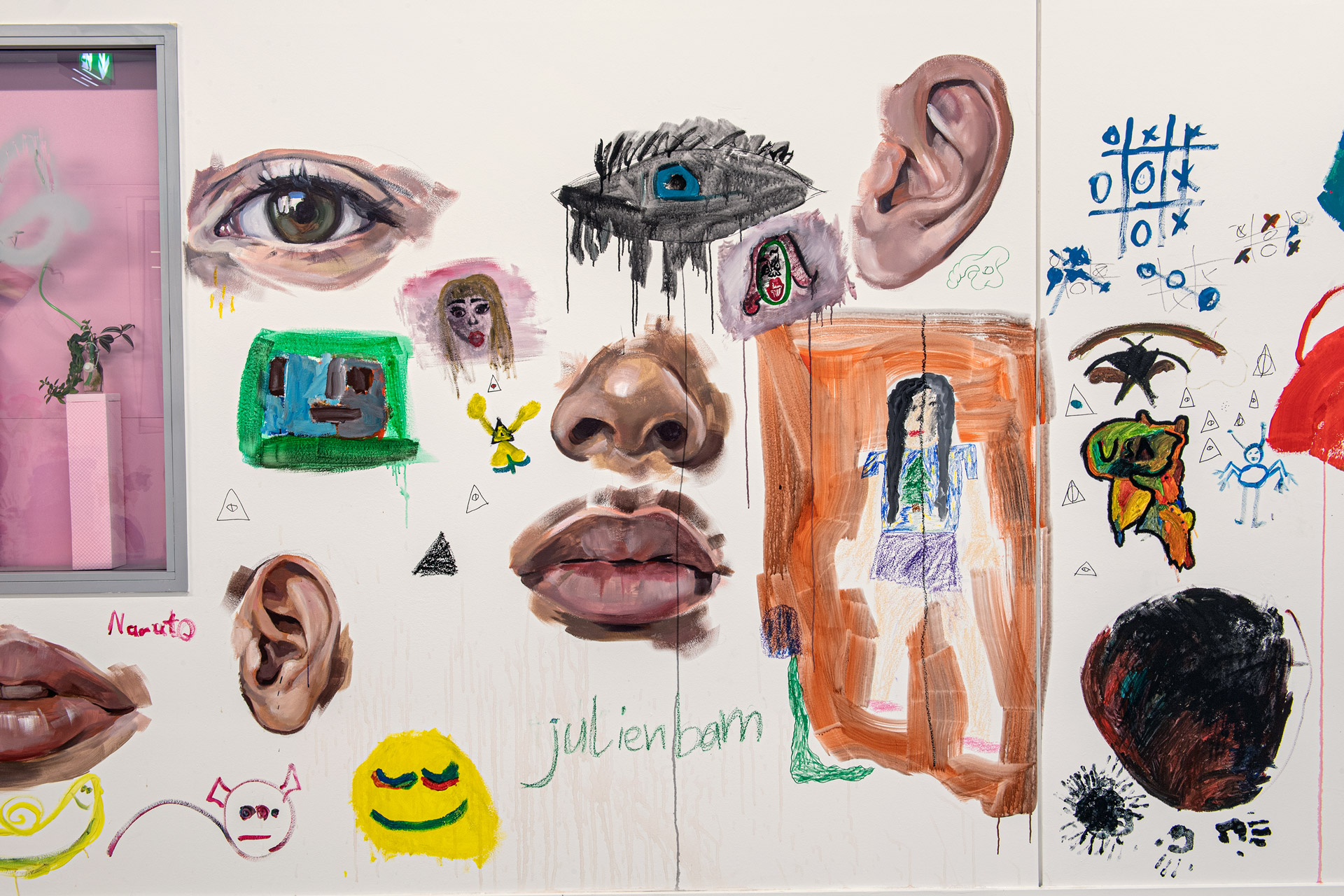 Could go straight into a museum: a sample from the “Art & Wall Design” module at ZHdK. Photograph: Regula Bearth © ZHdK

Eva Kunz is studying journalism and organisational communication at ZHAW Zurich University of Applied Sciences in Winterthur and works as a freelance author. She balances writing with collaging and analog photography. She was delighted when asked to report on the efforts to design the “awesome white wall.”