A song is never finished 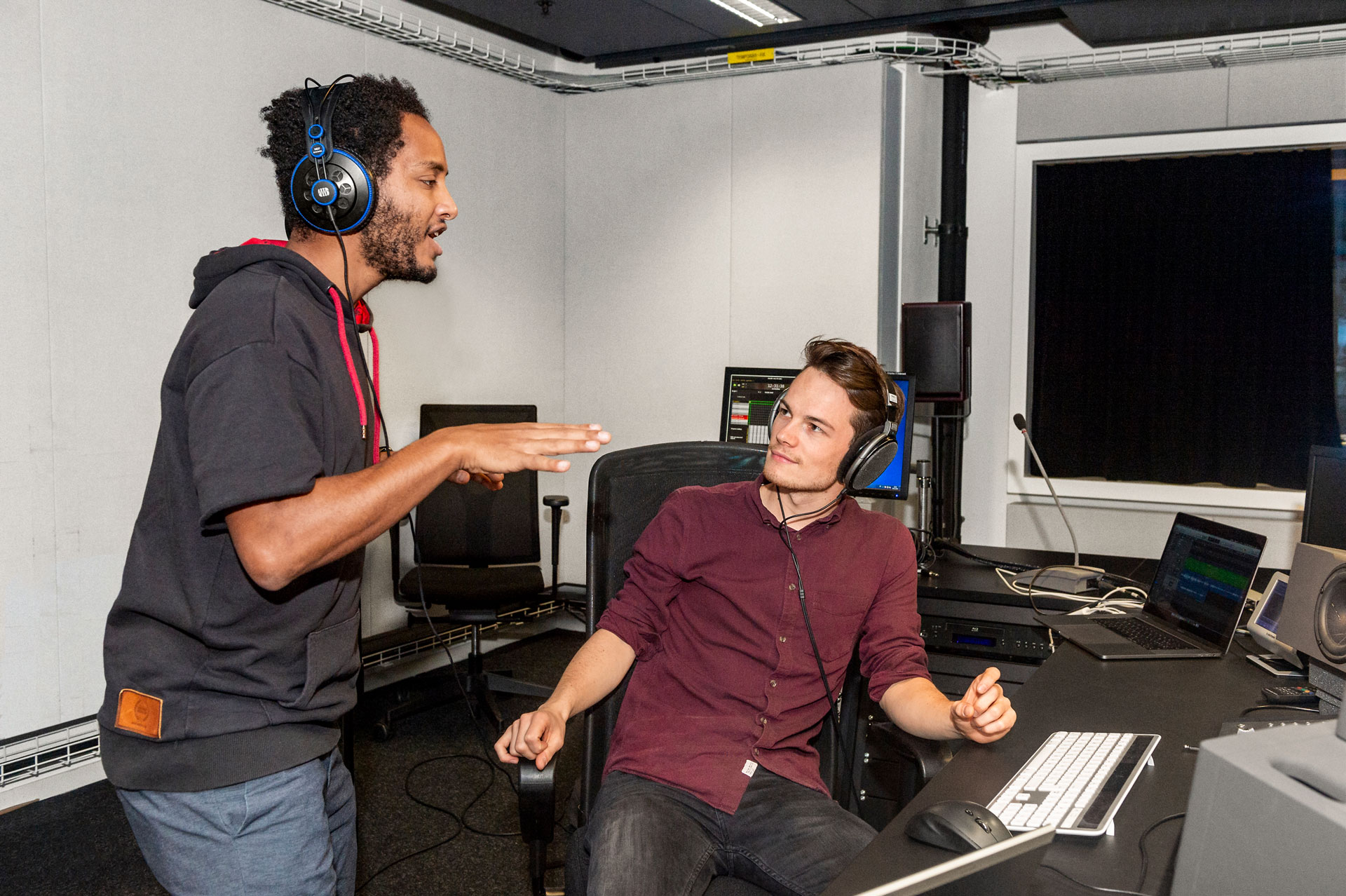 They storm the charts and become catchy: pop songs often combine rhythm, melody and lyrics in an easily consumable way. But are they as easy to produce? Singer Silas Kutschmann and sound engineer Yves Gerber told Zett how a raw idea becomes a well-mixed song.

Zurich, district 2, an apartment building near Enge railway station. It is already late, the lights are being turned off in some apartments. Quiet guitar music rises from the cellar. The same chords in different variations. And a male voice: “Saw it in the movies,” the voice sings louder, then more playfully, or more assertively. Silas Kutschmann, a ZHdK music education student specialising in pop, lets his thoughts run free. He doesn’t need much: a bandroom, a guitar and, ideally, the night. “Songs come to me when I sit down with an instrument with a feeling that I can’t put into words,” explains the 28-year-old. The intention to spin a song starting from a feeling is usually there. The hope always exists.

Maintaining flow with the mobile phone

Every song by Silas Kutschmann starts analog. He follows an inner urge to play what he feels in himself. It is a careful and playful approach. He finds a groove, either with his guitar or on the piano. The words come later. Any words. Sometimes they even rhyme: “It starts with a little spark,” Silas describes the almost miraculous development. And in the middle of this magical moment he pulls out his mobile phone. Not to check text messages, but to record his ideas using the voice memo app. He never writes down chords. “I always have my mobile phone with me and it’s quick to use. That’s how creativity flows.”

Ten days later. Silas isn’t singing “Saw it in the movies” anymore. The new hookline is “I’m shooting flares.” He accompanies himself on the piano instead of with the guitar. The melody and structure are done, but the lyrics aren’t quite ready. Silas, who was born in Ethiopia and adopted by a Swiss family at the age of five, never doubted the language of his songs. He laughs: “If I sang German, everyone would hear my St. Gallen dialect.” Of course it is a disadvantage not to sing in one’s native language. Besides he also aspires to express himself with the lyrics. As regards content, he usually chooses the same theme: “I often sing about love. Because it goes straight to the heart and we all have our own story to tell.”

Two months later. The song now has a title: “Flares.” Not much else has happened, though. Silas shirks going to the recording studio because this means committing to a sound for the song. Besides, the intimacy is lost. “It becomes mathematical,” explains Silas, deromanticisingly.

Singer and sound engineer will now work together. In our case they know each other: Yves Gerber, who is specialising in pop on his master’s in sound engineering at ZHdK, wrote a song for Silas as his bachelor’s thesis, which they recorded afterwards. “Pop songs are the best way for a sound engineer to prove his worth,” says Yves, relishing the challenge. This is because, in pop, unlike punk for example, the finished product should sound as perfect as possible. Every note has to fit, all instruments need to be arranged neatly. “A good sound engineer can get up to 20 percent more out of a song,” Yves estimates. The 24-year-old is strict with himself and his team. Sometimes he asks the artist to revise the lyrics or to sing a new line. It’s a role change because the responsibility to refine the song until everything is right now lies with the sound engineer.

Disassembling songs in the sound studio

For Silas, arranging is challenging: “I struggle to put a song on a grid and disassemble it.” At the same time it’s easier for Yves to work on a song existing in a raw version. Does the singer fear that the song might not go down well? “I’m not that squeamish when it comes to criticism,” he relativises. When Yves listens to “Flares” for the first time, he pays attention to the feelings it triggers in him. “Mistakes aren’t that important but feeling that I want to hear the song again is.”

Yves’s work can be divided into three phases: recording, editing, mixing. He wants to get to the heart of the sound, to make the individual components interlock like small cogs. The musicians are invited individually or together to record. Instruments and vocals are recorded until the sound engineer is satisfied. “Silas is an experienced singer. I hardly ever need to correct his melodies,” Yves says confidently. The better he knows the artist, the more he can get out of a song. It’s a process in which Yves and Silas engage in close dialogue. The sound engineer plays the current mix as an MP3 file and the artist gives his feedback. Both are happy to rely on each other in this phase.

And when is their work done? Even after the release, they are still thinking about what could have been done differently. Independently of each other, they agree: “A song is never finished.”