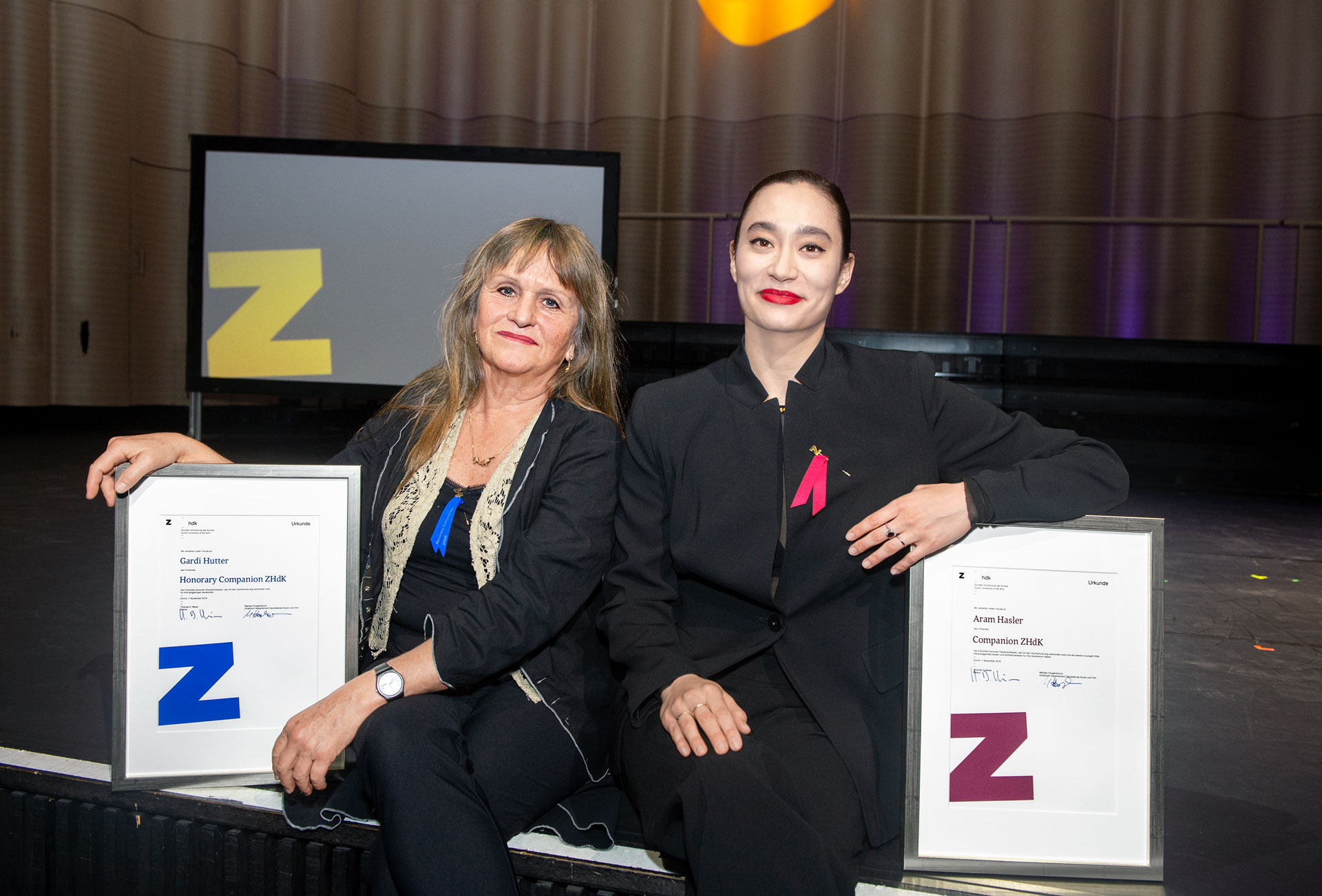 An interview with “ZHdK Companions” Gardi Hutter and Aram Hasler

They take to the stage, yet this is only a small part of their work: Clown and ZHdK alumna Gardi Hutter is also a company, and for Aram Hasler, a dancer and graduate of Zurich Dance Academy (taZ), hard training is as important as on-stage performance. The two recipients of ZHdK’s honorary titles discuss craftmanship, discipline and their ideas for an arts university of the future.

Jörg Scheller: What were your formative experiences at ZHdK as regards your professional career?
Gardi Hutter: In my day, wanting to be an actress was still an act of rebellion. Today, it is almost the done thing for at least one child to go to acting school. I was fortunate that theatre education had just been reinvented. As students we were asked what we wanted to learn, what we thought we should learn or what we wanted to do in life. We practically invented our subjects ourselves. I wanted to learn how to write plays. At that time our training in theatre education was broader than in acting.

“In my day, wanting to be an actress was still an act of rebellion.” Gardi Hutter

Aram Hasler: My teachers Steffi Scherzer and Oliver Matz were there when it mattered. When I was about 13 years old, they said, “She’s got talent, let’s promote her.” I took part in competitions, which is a very important part of dance training, because this teaches you how to deal with pressure. Performing “Erdbeeri Mareili” showed me how dance creations come into being. These experiences prepared me for my professional life — besides my classical training, which I had to work hard for.

Jörg Scheller: What ought today’s degree programmes offer the disciplines in which you are both active?
Gardi Hutter: The basis is certainly good craftsmanship: you really have to master what you’re learning — whichever art it happens to be. Another crucial question is how young artists come into their own. How can creative processes be initiated so that students are not completely dependent on a director, an artistic director or an author? I don’t know exactly how this works, but it should always be the goal.

Aram Hasler: Every school needs to be progressive and remain open. As a dancer I believe that having a classical foundation is very important. Training hard not only strengthens the body, but also the mind. Classical ballet companies are opening up more and more to contemporary dance. So it’s important that students also get to know modern choreographies such as those by Crystal Pite or Sharon Eyal — besides pursuing classical training.

“Training hard not only strengthens the body, but also the mind.” Aram Hasler

Gardi Hutter: If I were still a student, I would like to talk to dancers about the body. We both work with the body, but extremely different forms are required. I would find it exciting to intensify this exchange. This is exactly the chance that the Campus Toni offers as a training institution that unites all disciplines under one roof.

Jörg Scheller: As artists, how do you perceive the tension between organisation and creativity?
Gardi Hutter: I’m also a company. I once calculated that the time I spend on stage only accounts for 2 percent of my work. I spend more time in my car or at the office. I spend more time everywhere else than on stage.

Aram Hasler: I am primarily perceived as an artist. Creativity always comes first. Still, I am also interested in the athletic side and find it important — especially as a woman — to also become stronger in that department. Maybe in the future we will develop our own body language and thus counteract outmoded perceptions. Pushing this issue forward is important to me.

The interview was conducted at the award ceremony, held at the ZHdK University Day on 7 November 2019.
Media release (only in German)
For a previous article on Aram Hasler
Once a year, ZHdK awards the honorary titles of “ZHdK Honorary Companion,” for many years of service, and “ZHdK Companion,” for outstanding achievements in young years. The ZHdK honorary titles are not tied to any financial support. Members of ZHdK may nominate award winners. Award decisions are taken by the university board, upon the advice of a committee.
Lea Dahinden (lea.dahinden@zhdk.ch) is a project manager at ZHdK University Communications.
Teile diesen Beitrag: