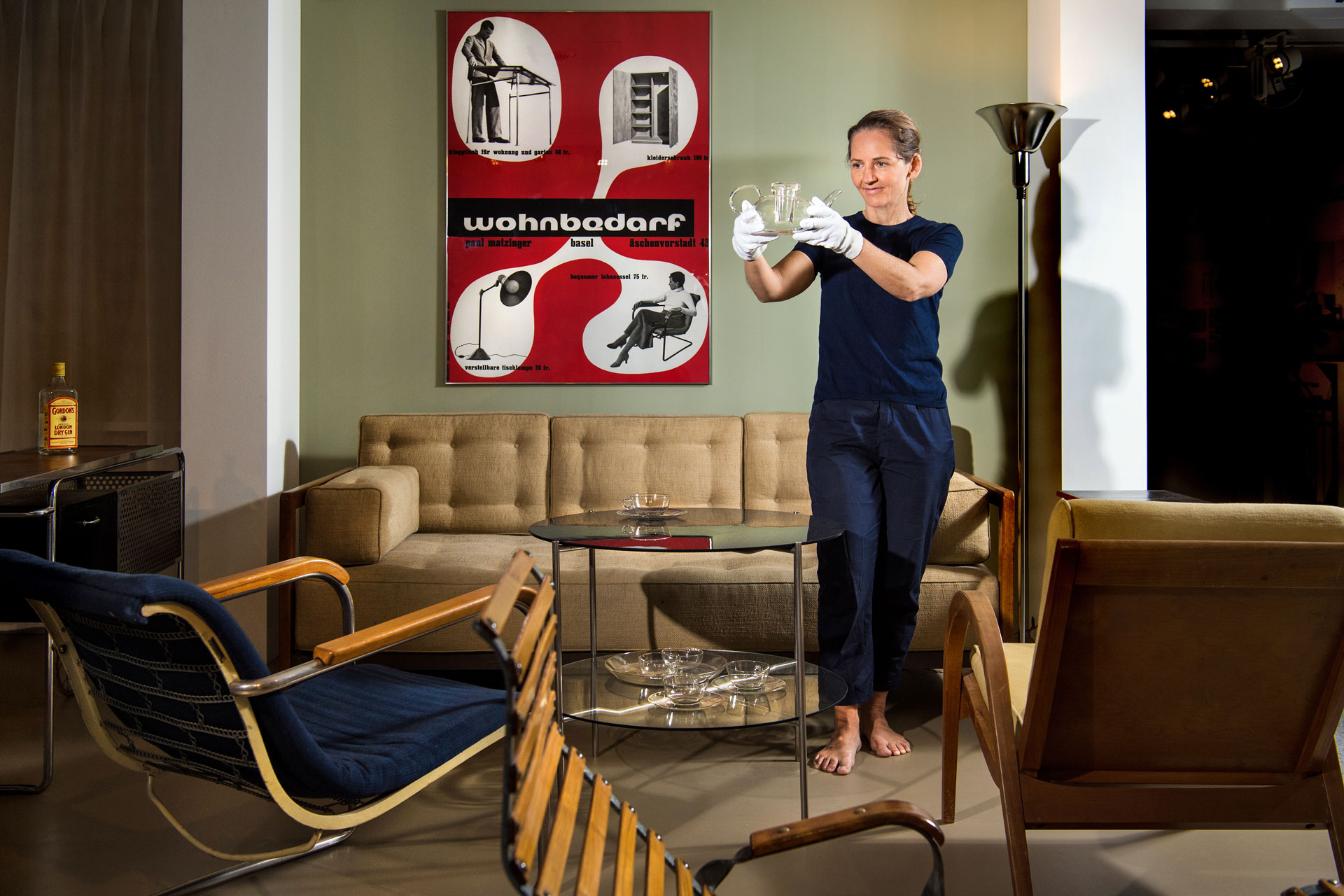 Coveted contemporary witnesses: Renate Menzi collects furniture for the design collection, which she curates on behalf of the Museum für Gestaltung Zürich. Among others, items are exhibited in period rooms. Photograph: Marion Nitsch © Das Ideale Heim

Come and take me with you

Whether as a vehicle for a journey into the past or as a prop for real life: furniture from bygone times may arouse longing. At the Design Collection of the Museum für Gestaltung Zürich, furniture is catalogued as potential exhibits and researched according to scientific standards — but neither their acquisition nor exhibition is free of emotions, as Renate Menzi, curator of the Design Collection, explains.

As a curator of a public collection, I am not under the same pressure as private collectors, who build their collection within a lifetime and with their own funds. Nevertheless, I know the burning desire of wanting to have, which suddenly overwhelms you at auctions or furniture fairs, for example. Competing with other bidders is not pleasant. In such moments, furniture becomes an object of desire. Its absence from the collection is perceived as almost painful.

Longing for what is missing only becomes possible through ordering a collection (and through its order), which is every collector’s fate. The more inaccessible or rare an object is, the greater the longing to have it. Furniture dealers know exactly how to deal with this desire; after all, the intensity of demand also determines the selling price. But it is not uncommon for dealers to be as addicted to furniture as their customers, even addicted to certain names, stylistic epochs or materials. I know a dealer who only sells to people whom he considers worthy enough to own the coveted items.

The pain of separation and pride

Most of the important pieces of furniture in our design collection are donations. Their changing of hands always involves mixed feelings: the pain of separation when giving away a memento is replaced by the pride that grandmother’s wardrobe is now going to the museum and thus becomes an item of public interest. Usually the object comes with a personal story, such as how the family came to own the piece, how and by whom it was used or whether it was repaired and altered over time. Many of these pieces of furniture bear traces of their use, a patina that individualises and auratises a serially produced object.

If we receive a valuable piece from a private household or from a collector, we offer the previous owners the opportunity to visit it at the museum if their longing becomes too strong. In exhibitions and publications, we mention the names of our donors and thus document the bond between object and person. Sometimes, however, this bond is so strong that we draw up a contract with our donors entitling them to lifelong use of the furniture, which they know will be in good hands with us after their death.

Nostalgia and wanting to have

There are many ways of presenting furniture. Ever since their invention in the 19th century, museum visitors have loved so-called period rooms with their furniture ensembles, but also with their built-in interiors, such as wall panelling and windows. They cater to the tourist’s eye or nostalgic yearning, evoke personal or collective memories and invite us onto a journey through time. Playing with the supposed authenticity of these elaborately furnished rooms, which at times seem like film backdrops, has been criticised for various reasons and yet reinvented time and again. The “zeitgeist” and the lifestyles associated with such rooms, but also the attitude and intention of the designers of that time, are condensed into these spaces as if in a snapshot. Recognising exhibits and the stories evoked by them may also trigger a journey into the observer’s own past. One visitor, for example, burst into tears during a guided tour of our Open Collections because after many years she saw the tubular steel furniture with which she had grown up for the first time again.

Nostalgia as a somewhat milder form of longing, as a desire-laden turning towards an object from the past differs from the intense desire to have. The furniture before us represents “lost time,” the irretrievable moments of a life, more directly and more sensually than written sources or pictures. Accordingly, many visitors would like to touch furniture exhibits, which unfortunately is not possible for conservation reasons.

As a curator at the Museum für Gestaltung Zürich, I would like to convey above all various aspects of design history, such as a person’s or a time’s design stance. And yet, I keep realising that everyday objects from the 20th century arouse a diffuse, more general longing for a bygone era. For a more manageable world, for deceleration and permanence. This in turn has to do with the design and quality of the furniture and with ideas about living. It pleases me when I experience how personal stories weave themselves into collective design history, when design history becomes polyphonic and emerges together with visitors during guided tours or workshops, for instance. Ultimately, the museum does not claim any interpretive sovereignty over its collection objects. Instead, it presents them for debate in ever new constellations and asks itself: how can design history be reconstructed?