Consultation at the “Institut Indiskret” 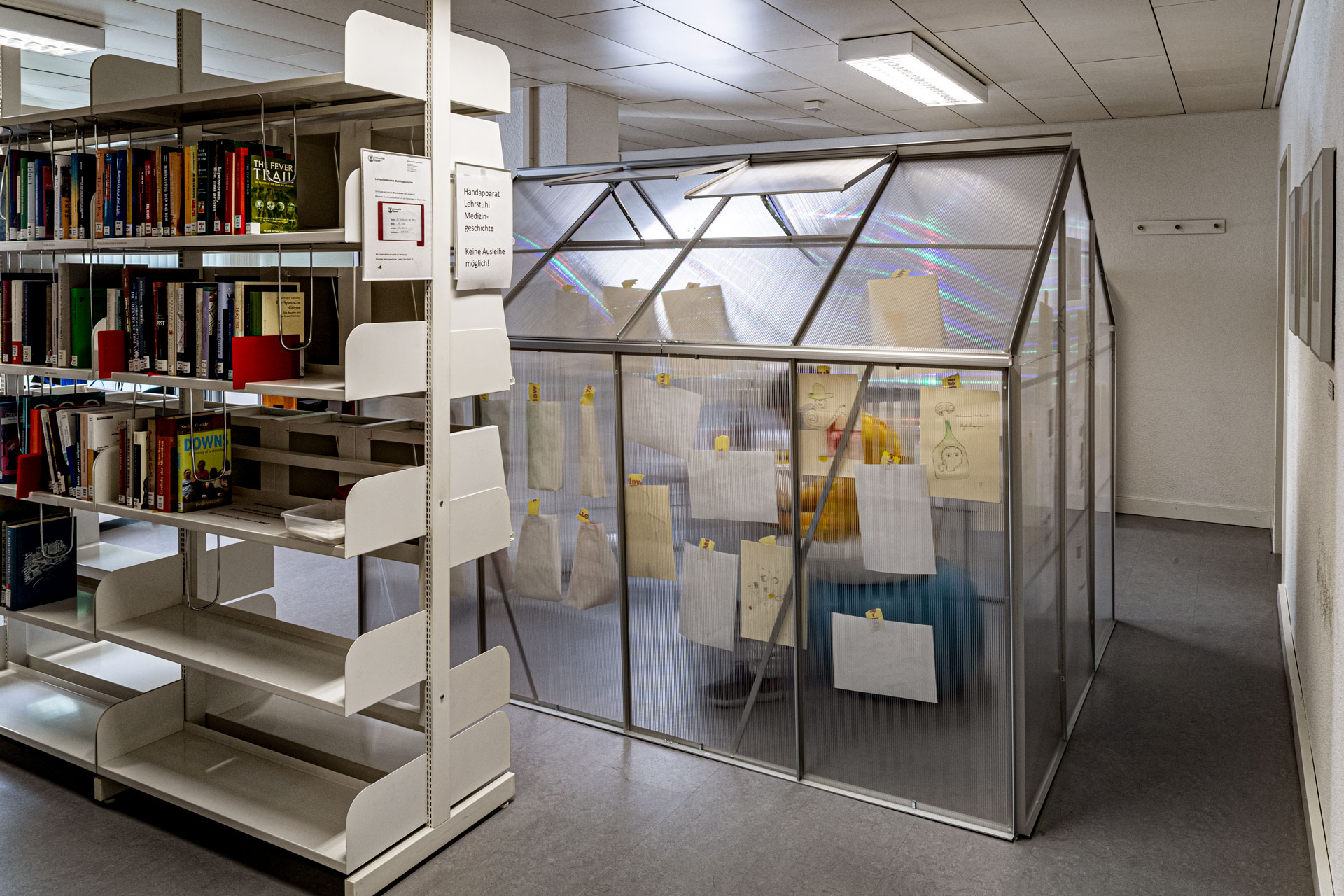 Johannes Willi is interested in people, their professions and how they organise themselves. And in greenhouses. One of them is currently located at an institute library at the University of Zurich and is serving the Basel-based artist as a place for research and exchange. ZHdK’s artists-in-labs program is facilitating Willi’s extraordinary collaboration with researchers, doctors and patients on the subject of chronic pain.

Most researchers at the University of Zurich’s Institute of Biomedical Ethics and History of Medicine (IBME) start the day with coffee. Next, they open their books, write texts or discuss their research projects. So far, so good. Since April 2019, however, an artist has been involving himself in the institute’s routines. Following a call for applications, Johannes Willi was awarded a scholarship to participate in a residency of ZHdK’s artists-in-labs program (AIL), which is offered jointly with the IBME and the Centre for Pain Medicine Nottwil. And so he is now sitting at his desk in one of the IBME offices and is discussing his first ideas for the project.

The topic of the call was current research on chronic pain, patient narratives and the digitisation of medicine. Chronic pain affects over one million people in Switzerland and is a growing social problem. Since the cause of this pain, which lasts for years, is often not (or no longer) identifiable, this frequently leads to communication crises, in everyday interactions between those affected, their friends, relatives and doctors. Amid this force field, the arts can find diverse forms of expression and translations, open up new perspectives and ask new questions. Willi’s six-month residency spans a broad field of exploration: thematic and methodological research, discussions with IBME researchers and meetings with doctors and patients at the Centre for Pain Medicine grant the artist access to a wide variety of hypotheses and infrastructures.

The AIL has been exploring the transdisciplinary interface of art and science for more than 15 years. Central to its activities are artist residencies — several-month stays in research groups at renowned institutions in Switzerland and worldwide. Like other artists, Johannes Willi was also interested in exchanging ideas with representatives of other disciplines over a longer period of time. “Through my work I try to interweave people with my art so that they become accomplices,” he says and heads off to the IBME library.

Accomplice: a multi-layered term that definitely relates to the AIL philosophy. Because before any project results can materialise and be presented via exhibitions, publications or films, the focus lies on participant interaction. It is about their similarities and overlaps, boundaries and contradictions, and the tension that can and should arise from their creative complicity. For Johannes Willi, it first of all involves an expedition into the unknown. Which explains why he approaches this challenge like a researcher.

The greenhouse is delivered on a Tuesday morning: aluminium scaffolding supports milky plexiglass plates. The structure is high enough for an adult to stand upright. Willi screws the greenhouse together in the institute library, furnishes it sparingly and sits down on a gymnastics ball. From now on this will be his institute within the institute, his so-called “Institut Indiskret.” He first goes about planning a series of conversations. Over time, the notes, objects and ideas accumulated during his residency will grow rampant in the greenhouse-cum-institute. He perceives his role as an outsider in his new surroundings as a source of inspiration and empowerment. As an artist, he can show something that does not fit into the institution’s logic, he says. This also applies to his multimedia installation, displayed at the Swiss Art Awards in June 2019, which he had already begun working on before his residency. Doctors and nurses from the Centre for Pain Medicine Nottwil travelled to Basel, where, together with the artist, they visited and discussed his nominated work. It consists of two large screens facing each other and connected by a halfpipe. One video shows Willi visiting a therapy session with an osteopath. The artist is seen carrying a monkey’s skeleton in front of him like a puppet. The second video shows chimpanzees in Basel Zoo. Willi’s work addresses the relationship between humans and their closest relatives and creates complex relationships between science, power, curiosity and play — not least by questioning our often institutionalised view of the world. 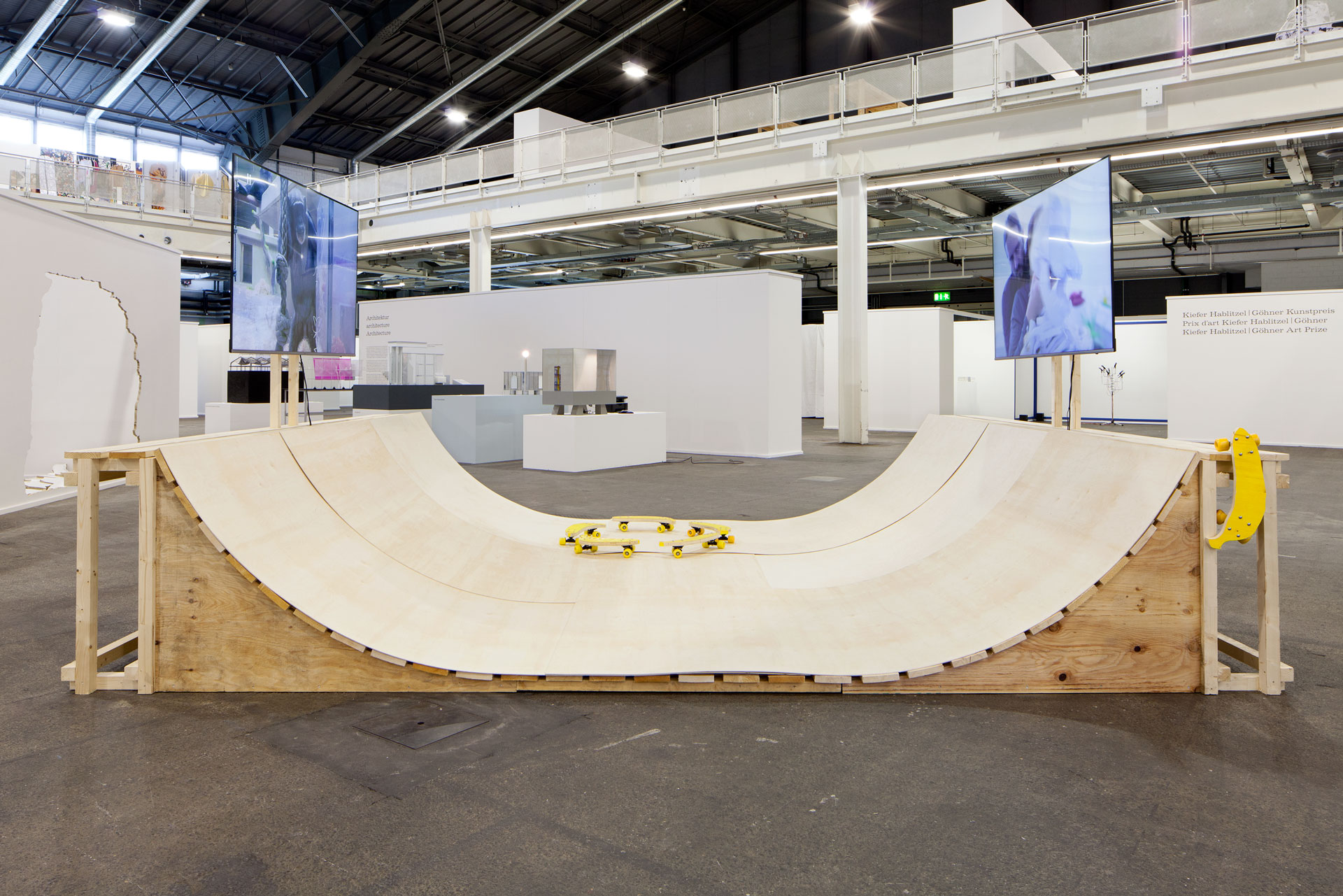 Through such encounters, the residency aims to facilitate mutual exchange. Existing knowledge is shared, reconsidered and re-contextualised; ideas are bounced back and forth and new approaches in art and science are developed. In many AIL projects, this joint working process is also the starting point for long-term collaboration that extends beyond the original project duration; concerts, performances, participation in group exhibitions or conferences are all part of this. In addition, many residencies have developed into practice-based artistic PhDs. The AIL’s affiliation with ZHdK helps ensure project sustainability. The Toni Campus frequently hosts presentations by current or former artists-in-labs scholarship holders, thus promoting student involvement in AIL projects. Johannes Willi also has a connection with ZHdK: he is not only a Trends & Identity alumnus, but has also been teaching here for several years. Thus, in the autumn semester of 2019, the contents and ideas generated during his residency will intersect with those of his current students.

A spider hunting for moments

It is Tuesday morning again, this time at the Centre for Pain Medicine Nottwil, an affiliate of the Swiss Paraplegic Centre. Willi is taking part in a group meeting of non-German-speaking pain patients. The problems and questions are complex, communication difficult, the outcome unclear. A situation that suits the artist. He reacts to it intuitively: “My work feeds on encounters — I meet a doctor or a patient, exchange ideas with them, and we go our sep­arate ways again. Like a spider I gather moments and bring them to the nest. This slowly becomes a larger whole, without me knowing where it will ultimately lead.”