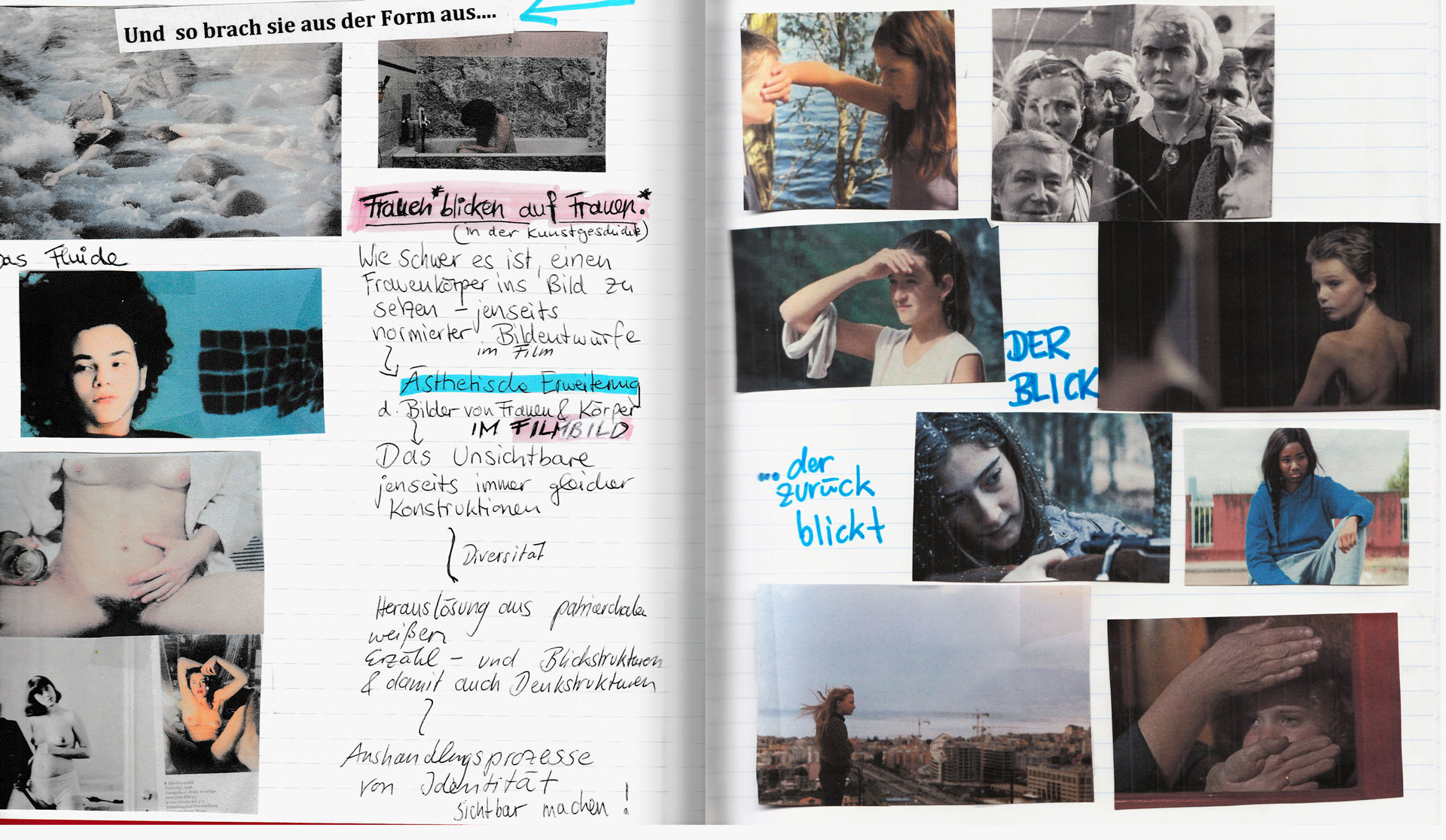 A woman is roaming the city, another is angrily kneading dough in the kitchen, yet another is lying exhausted in bed. Seen it all before? Are these scenarios typically female? Bernadette Kolonko, a film director and research associate at ZHdK, is exploring the image of women in feature films as part of her fellowship programme. She longs for more diversity.

The feature film, as an art form, involves active creation. In contrast to documentary films, feature film directors can intervene more strongly in the plot and shoot a scene several times. There is a script, and there are actresses and actors. For a long time, the film industry was dominated by men. Men wrote the scripts. Men worked as directors. Dramaturgy and narratives were created on the basis of the male hero. Where, however, does the heroine’s journey lead?

Bernadette Kolonko, aged 34, studied feature film directing and screenwriting. After graduating from the Film University Babelsberg Konrad Wolf, she is currently pursuing a third cycle Fellowship Programme at ZHdK. Her work “Unsichtbares und Ungesagtes” (The Unseen and Unspoken) enquires why the same images of women are shown time and again in feature films. “I could have asked the same question about images of men in feature films, because they too are stereotypical,” she explains, before emphasising that “confining or exclusionary role models can affect all sexes.”

What is typically female?

Kolonko has set out in search of atypical characteristics of women in film. Asked about her motivation, she replies: “For my interviews, I have chosen directors whose works aroused my curiosity because they are about the struggles and longings that preoccupy me, my friends, my mother or my grandmothers and which suddenly come to light here.” So far she has interviewed four European directors aged 30 to 45 about their work with actresses. Her questions include: “How does bodywork come into your work with actresses?” Or: “When are figures subjects for you and when objects — and is this question important in your work at all?” Kolonko is constantly aware of her responsibility as a director: “Much of what is staged differently today is the result of conscious directing decisions. For instance, when a woman does not cross her legs on a date, does not lean her head to one side, or does not shave her pubic hair.

A naked woman’s body lying in a bathtub is a very standardised image. And yet, it may become something completely different if, for example, the image and the body are staged to conjure up the idea in the viewer’s mind that water emphasises flowing and represents movement and mutability. Thus, such a scene depicts more than just “a woman washing herself” or “an erotic female.” Rather, it stimulates thought. In her interviews with female filmmakers, Kolonko wants to find out whether this new pictorial language was created specifically or rather accidentally. If she had to answer the question herself, she would choose the first answer. Things only raise through awareness. It takes deliberate decisions not to fall into the usual, normative patterns. And last but not least, it also requires courage and the power of conviction. How often has Kolonko heard people say: “But that’s not exciting” or “Nobody empathises with this woman anymore?” She replies: “Who defines what tension and compassion should look like with women?”

From interviews to body exercises

The interviews serve Kolonko as a basis for the second part of her research. Based on the directors’ answers, she does physical exercises with ZHdK acting students. The staging experiments deal with “female” and “male” codes in body representations. What does a particular posture or position feel like for the actresses? Is it strange because it is unfamiliar, or unfamiliar because it is strange? Perhaps the image that first comes to mind for a scene is not always the best one. Kolonko encourages directors and actresses to consciously choose contradiction.

Doing things differently can be attractive. But the path is neither straight nor easy … and sometimes even in vain. Kolonko does not want to judge, but rather to call for diversity. Only raising awareness will change the screen image of women. Stories should not be written because one knows in advance that they will work, but because one consciously wants to confront the audience with an idea. At some point, women’s pubic hair will be just as unspectacular as the perm.

The postgraduate Fellowship Programme of the Department of Performing Arts and Film offers holders the opportunity to develop an artistic project in the performing arts and film in the field between research, production and teaching. The programme aims to strengthen and advance artistic research in and through the arts through forward-looking projects by young artists.
Bernadette Kolonko (bernadette.kolonko@zhdk.ch) studied fine arts with a specialism in photography at the Hochschule für Grafik und Buchkunst, Leipzig, and at Zurich University of the Arts. After earning her Bachelor of Fine Arts (2010), she studied feature film directing and screenwriting at the Film University Babelsberg Konrad Wolf. Her project “Unsichtbares und Ungesagtes” is part of the Fellowship Programme at ZHdK’s Department of Performing Arts and Film..
Lea Dahinden (lea.dahinden@zhdk.ch) is a project manager at ZHdK Communications.
Teile diesen Beitrag: