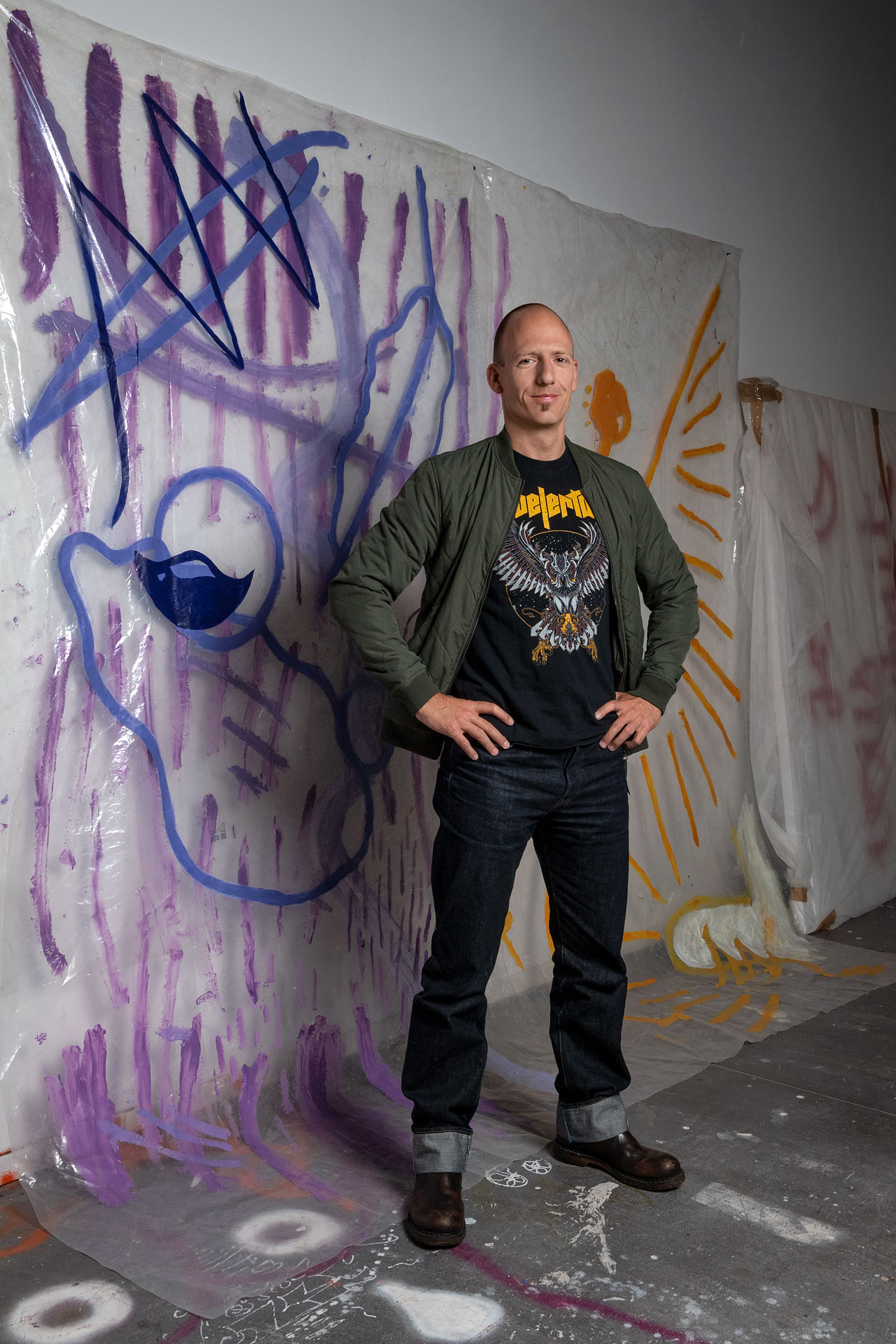 He lives in fast trains and of course in his body: lecturer, art historian, journalist, bodybuilder and musician Jörg Scheller.

A short while ago, he was touring Abkhazia with a group of ZHdK students, before heading off to give a conference paper in Porto; and shortly before travelling, he ran a reading group at the Toni Campus, gave a lecture, mentored two degree projects and participated in five strategy, reform and planning sessions. Tomorrow he will introduce interested members of the public to “fine art” on an evening stroll through Bern. The day after tomorrow he will be appearing on Swiss TV’s “Sternstunde der Nacht” to explain what the contemporary body cult is all about. Other recent activities include moderating the ZHdK University Day, collaborating on the ZHdK conference “The Perfumative: Perfume in Art and Design” and writing an essay on the concept of the conservative for the Neue Zürcher Zeitung. Amid this busy schedule, he responds promptly to e-mails from all over the world and finds some spare time in-between to lift dumbbells and tweet on German politics.

Jörg Scheller, who holds a doctorate in art history and is a passionate bodybuilder, flexes his muscles in many weight rooms. The above list of activities and commitments is far from exhaustive. Worth adding are his contribution to what is probably the world’s only heavy metal delivery service, the duo “Malmzeit,” as well as his work as an exhibition curator and book author. When I ask him how many hours his day has, he gives a typically laconic answer: “Unfortunately, after 24 hours I reach an inexplicable limit. But I’m working on that.” He adds: “The only thing that makes me tired is dealing with people who misunderstand life as attuning oneself to what is supposed to come afterwards.”

A late summer morning in a seminar room on the sixth floor of the Toni Campus: twelve students, mostly dressed in black and wearing heavy-duty black shoes, are analysing the videos of well-known heavy metal bands as part of a Z-module. Jörg Scheller and his co-lecturer Dennis Basecke-Beltrametti add their thoughts to the students’ observations, sharply, precisely and utterly seriously. What some consider senseless noise is here subject to semiotic dissection as a phenomenon of popular culture. Bar after bar, musicologist Basecke-Beltrametti reveals how a particular band deploys tones and rhythms. Scheller adds comments from an art-critical perspective. There is talk of visual excess, of a baroque abundance of signs that all refer to death, love, world domination and the apocalypse. Heavy metal, Scheller explains, moves in the force field between cultural pessimism and self-empowerment: “The music is always exclaiming: ‘But!’” It’s never about small matters, but always about the big issues, the very big ones: “You can do anything in metal, as long as it’s heavy.”

The combination of art theory, body culture and loud rock music is — one might say somewhat maliciously — Jörg Scheller’s unique feature. He is regarded as an expert not only because of his expertise, but also because he constantly pits theory and practice against each other. Not only does he think about bodybuilding and heavy metal, but he also practices both. He not only lectures on the “history of extended art,” but contributes to an “extended art history” as a curator and critic. He moves amid his fields of interest both as a participant observer and as an inquiring researcher. Thus, it is barely surprising that a series of events he is organising is titled “Art History as Ethnography.”

Jörg Scheller describes himself as a progressive conservative : “I like to think long-term. I like mixed cultivation and crop rotation.” At ZHdK, this benefits the Department of Art & Media in particular, where he has been head of theory in the Bachelor’s programme since 2016. He is also a member of the Teaching & Learning Committee, which develops in-house continuing education courses.

What interests someone like Scheller, who could happily bide his time as a freelance journalist, beyond institutional narrowness and compulsory meetings, in university work? First, it allows him to be political, to negotiate and to deal with diverging interests. Second, as a lecturer he is confronted with diversity, with a heterogeneous student body: “Nothing is self-evident, and therefore no hegemonic discourse is possible.”

Perhaps that’s what prompted him to have his say on Twitter two years ago: the diversity of opinions, the openness of discourses, the presence of difference. The motto of his @joergscheller1 account is: “The private has become too political for me. I am retreating into public space.”

Scheller links event and reading tips, publishes quotations from the history of philosophy and culture, and comments on political debates. His tweets demonstrate his quick and sharp thinking. Above all, however, they attest to his wit and his capacity for self-irony : “If I were to write an autobiography, it would probably consist of a single sentence: I communicated so intensively with so many people about what needed to be done that neither they nor I found the time to do it” (Tweet of 19 October 2018).

Franziska Nyffenegger (franziska.nyffenegger@zhdk.ch) teaches in the Departments of Design and Cultural Analysis. She also has a flair for loud music, but prefers to spend her time at the swimming pool rather than in the gym.
Teile diesen Beitrag: