Putting everything on one leg 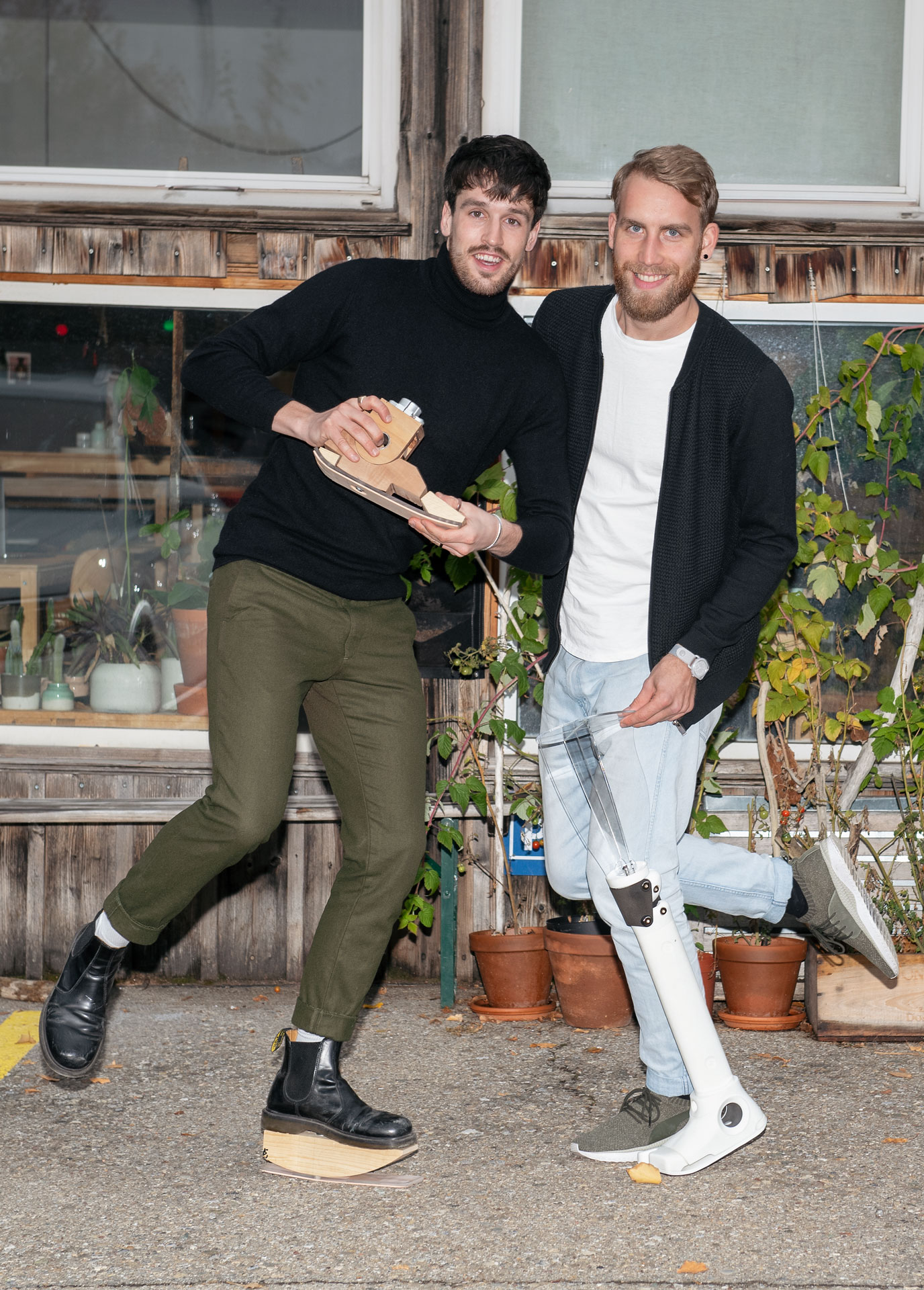 Their sights on the next project phase: Simon Oschwald (right) and Fabian Engel with the prototype of their leg prosthesis. Photograph: Regula Bearth © ZHdK

Simon Oschwald and Fabian Engel have already won numerous competitions with a leg prosthesis made of recycled plastic. Fresh from ZHdK, the two industrial designers are successfully asserting themselves in the start-up scene..

“Imagine losing a leg and getting a chance to walk again. It’s not just a leg you get. It’s a new life.” ZHdK Industrial Design graduates Simon Oschwald and Fabian Engel know how to sell ideas to a jury. If need be, in just two and a half minutes. Project Circleg, a leg prosthesis made of recycled plastic for developing countries, qualified for the international Falling Walls Lab Final in Berlin. It also won the national 2018 James Dyson Award as well as other national awards for young researchers.

Fresh from hitting the books, the two designers are now deep into business plans, business models and searching for investors. Simon Oschwald tells us that they acquired the ABCs of business within a very short time: “We are driven by the desire to implement our own project from A to Z, and to immerse ourselves in the start-up scene.”

No fear of uncharted territory

Simon Oschwald and Fabian Engel already proved that they are not afraid of striking out on new thematic territory when choosing their degree project, which kicked off Project Circleg. “As a student, I realised how much potential the social aspect of design holds,” says Fabian Engel. This also includes the sensible recycling of plastics — a waste product that can be found in large quantities, especially in developing countries. The desire to make a difference as designers, and their shared interest in plastic waste, turned the two students into a team. Within six months, they amassed an enormous wealth of knowledge about plastics and prosthetics. They exchanged ideas with Empa materials experts, the International Committee of the Red Cross and orthopaedic technicians. Then, in summer 2018, they finally held the first prototype in their hands. 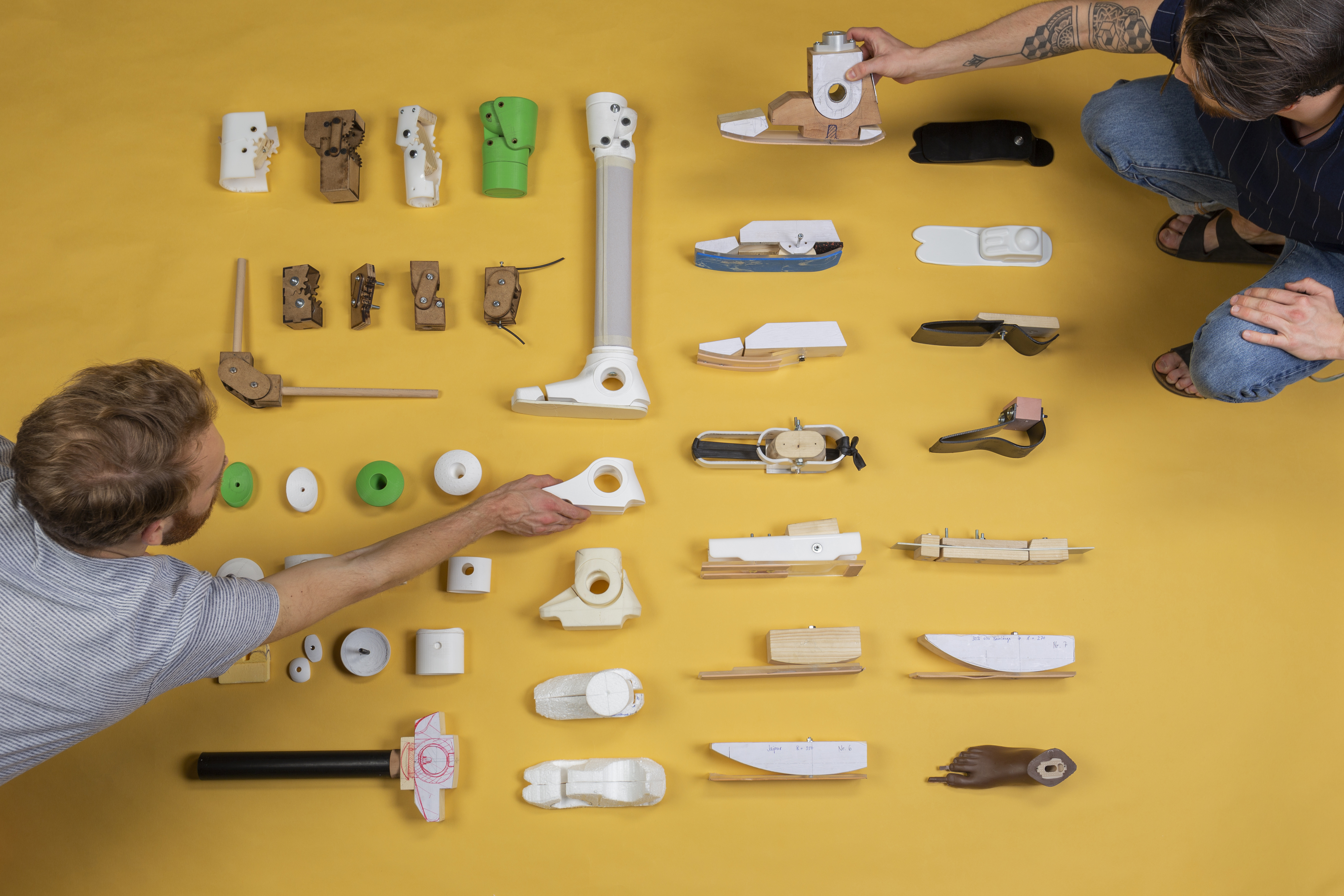 Presenting the design process: From the first model to the final prototype. Photograph: © Project Circleg

Enthusiasm in Switzerland and Africa

Fabian Engel recalls that their project attracted positive national and international acclaim already during the research phase: “A prosthesis producer in Kenya immediately said: ‘Send us your plans and we’ll start production!’” Moments of success like these finally encouraged the two young designers to cross the line from their degree project to their own start-up. “It’s certainly an advantage that we took a fresh look at the subject,” Simon Oschwald is convinced. Exchanging ideas with those affected, and with producers in Kenya, helped to develop the product from the user’s perspective. Unlike the models available in Kenya, their leg prosthesis has a knee joint. Thanks to the modular system, joints and colours can be individually adjusted.

Making a mark in the start-up scene

The two developers are not only overwhelmed by the positive acclaim, but also by the ample opportunities for start-ups in Switzerland. “Foundations, impact hubs, coaching or competitions, the support for start-ups is almost unlimited,” Oschwald enthuses. At the UZH Innovators Camp, a one-week summer school operated in association with ZHdK’s Z-Kubator Development Programme, they delved deeper into the start-up scene for the first time. This was followed by start-up funding from ZHdK’s Institute for Design Research, which got the project rolling. “Weconnex” and “Seif,” two companies specialising in social entrepreneurship, are also offering the two startuppers guidance. It seems as if they have meanwhile arrived in the business world. “Certain situations, such as networking with potential backers, still involve overcoming the jitters,” Oschwald confesses.

The young entrepreneurs are devoting all their time and energy to the project. Doesn’t such an ambitious schedule push one to one’s limits? “My personal limits are shifting from day to day,” says Oschwald. Their well-functioning teamwork is especially motivating. “In a personality test we found out that while our characters differ, we complement each other perfectly in terms of work ethic and values,” he adds. Ideal conditions for further developing the prototype.

Its combination of recycled plastic waste and existing local production methods enables the Project Circleg prosthesis to be manufactured locally and cost-effectively. Its modular design facilitates easily replacing and repairing worn parts and is designed for a sustainable material cycle.
Giulia Adagazza was a project manager at ZHdK University Communications. Sitting in the audience at the Falling Walls Lab competition in Zurich, she kept her fingers crossed for the Project Circleg.
Teile diesen Beitrag: