A breath of fresh air in the alphorn scene 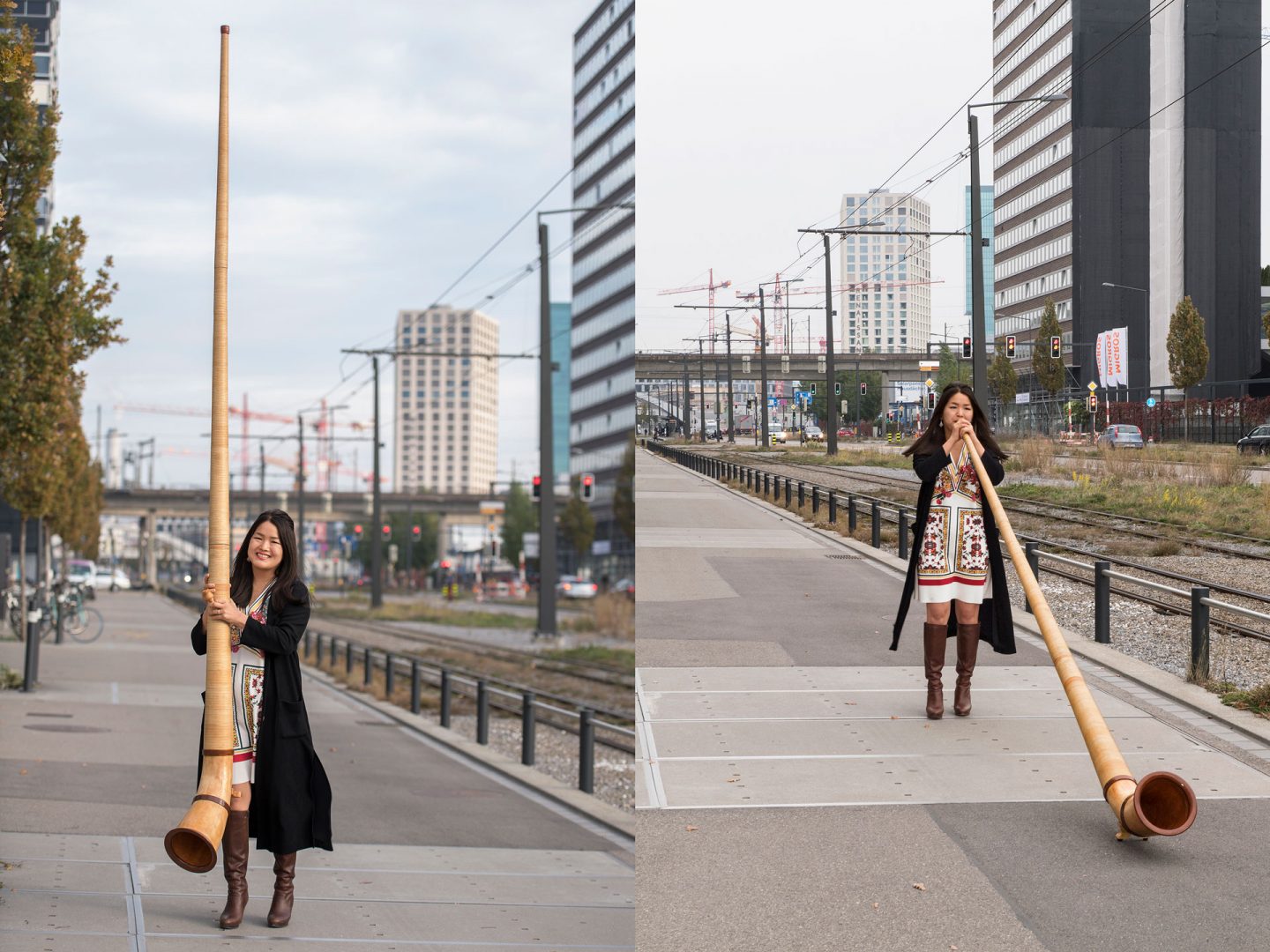 Yui Yukutake, a thirty-year-old ZHdK student from Japan, has discovered an unusual passion in Switzerland: playing street music with her alphorn. Her performances are well received, not only by passers-by and tourists.

A swinging, sublime sound escapes the alphorn, conjuring up images of mountains, cows and older men in edelweiss shirts with a thin crooked cigar hanging from the corner of their mouths. Yui Yukutake is a young Japanese musician who blows the alphorn wearing jeans and a T-shirt on Bürkliplatz in Zurich. The thirty-year-old has been performing this traditional instrument on the streets of various Swiss cities since 2015.

Performing the alphorn on the streets of Zurich

Yui came to Switzerland to do her master’s in music at Zurich University of the Arts. Her actual instrument, however, is not the alphorn, but the horn. How she came from playing the horn to the alphorn is quickly explained: “I do street performances in the summer to pay for my studies. I was barely earning anything playing the horn, so some fellow musicians told me to try the alphorn.” Together with two friends, also professional horn players, she founded The Alpine Sisters, an alphorn trio that has since been playing on the streets of Zurich, at weddings and private parties. The income increased, and Yui became more and more enthusiastic about the traditional Swiss instrument, which measures more than three metres.

How do her audiences react? “People are very friendly and react positively. Especially older people like a young woman playing a traditional instrument.” Only rarely does someone react unpleasantly and is usually put in their place by other members of the audience.

Describing her first steps towards playing the instrument, Yui says: “The alphorn requires a similar blowing technique as the horn. I simply tried it out.” She made swift progress through regular practice. So swift in fact that in 2018 she even won the Alphorn Competition at Nendaz International Alphorn Festival. She played a piece by Robert Scotton, who also performed at the festival. “He was very pleased that I chose one of his pieces,” Yui recalls. She has also composed for the alphorn herself. “Unfortunately, I haven’t yet had any competition success,” she laughs.

When she graduates, Yui wants to look for a job as a horn player in an orchestra. Preferably in Switzerland or in a neighbouring country — she will get married this year and would like to continue spending a lot of time at her home in Fahrweid. Before that, though, she wants to play the alphorn in her home country, at long last. “I will be visiting my parents in Takashima. I’m hoping to play back home for the first time.” Yui’s performances in her home country will probably not be as surprising as in Switzerland; Japan has a lively alphorn scene, with a number of festivals, clubs and competitions. Next summer she will be back in Swiss cities with her alphorn — perhaps even with new sounds, inspired by her visit to Japan.

Andrea Zeller was a project manager at ZHdK University Communications. In her conversation with Yui Yukutake, she learned a lot about Japan, the alphorn and city regulations for street musicians.
Teile diesen Beitrag: