Her games are stirring up the fitness sector 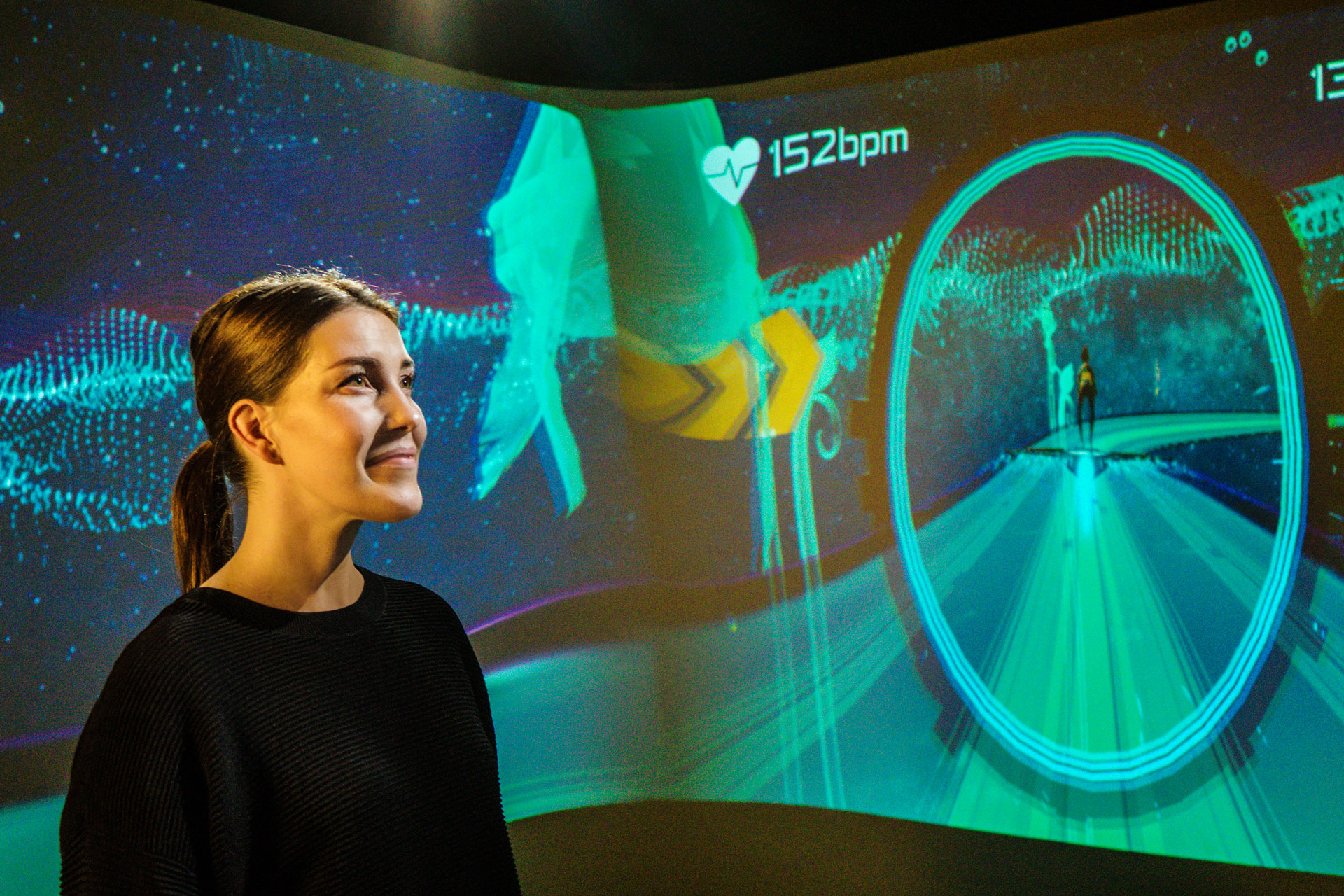 Something is in the making: Anna Lisa Martin-Niedecken combines know-how from sports science and game design with a founder’s drive and visionary thinking. Photograph: © Nicolas Büchi

Her development is as exciting as her business idea: ZHdK researcher Anna Lisa Martin-Niedecken is pursuing the vision of making digital natives physically fit through multimedia gaming experiences. This portrait describes her path from science to launching her own start-up.

“This is gonna go through the ceiling!” This, by and large, was the response to the presentation that Anna Lisa Martin-Niedecken gave this spring at FIBO in Cologne, the world’s largest fitness fair. At the industry meeting, the young entrepreneur talked to 400 CEOs about her vision for the future of the fitness industry: games based on scientific research and adaptable to individual needs will offer fitness fans as well as those shy of sports physical exercise that is both fun and optimally challenges body and mind. But that is not all: multimedia experiences in so-called cubes allow gamers to immerse themselves in new worlds — as members of an international community, they sometimes game alone, sometimes with or against friends all over the world. The fact that the speaker bubbling with innovative ideas came from an arts university sparked the audience’s curiosity even more, she recalls: “One of the previous speakers was Rainer Schaller, CEO of McFit Global, making me a little exotic at the forum.”

Where does this woman who wants to inject innovation into the fitness industry come from? After a voluntary civil service year in an orthopaedic clinic, Martin-Niedecken studied sports science at Darmstadt Technical University. She also worked as a therapist and trainer for a gym chain. A year after graduating, she attended a sports science seminar on serious games: “It was the time when the Nintendo Wii and many fitness games were being released. The subject was in the air.” Her future supervisor asked her if she wished to pursue doctoral work on digital sports games. During her PhD, she met a game design lecturer from ZHdK at a conference. A while later, he told her that ZHdK’s Institute for Design Research was looking for a senior researcher in the field of motion-based games — she applied and got the job.

Seeking the glitter in people’s eyes

In 2014 Martin-Niedecken came across the concept of “dual flow” in a research paper. The term refers to a state in which an individual is well balanced both on the motor and on the cognitive level: the aim is neither to under- nor to overchallenge body and mind. It dawned on the young researcher that there was a need for “a motion-based game that keeps players doubly balanced.” Between the original idea and the finished game lay what felt like “1 000 000 rejections,” from foundations and other institutions that Martin-Niedecken was applying to for research and development funds. Eventually, the sports fund of Canton Zurich recognized the potential and actively supported the project. In 2015, it was included in ZHdK’s Institute for Design Research talent advancement programme. Together with Koboldgames, a game studio founded by ZHdK graduates, Martin-Niedecken developed “Plunder Planet,” a motion-based game for children, a so-called exergame. 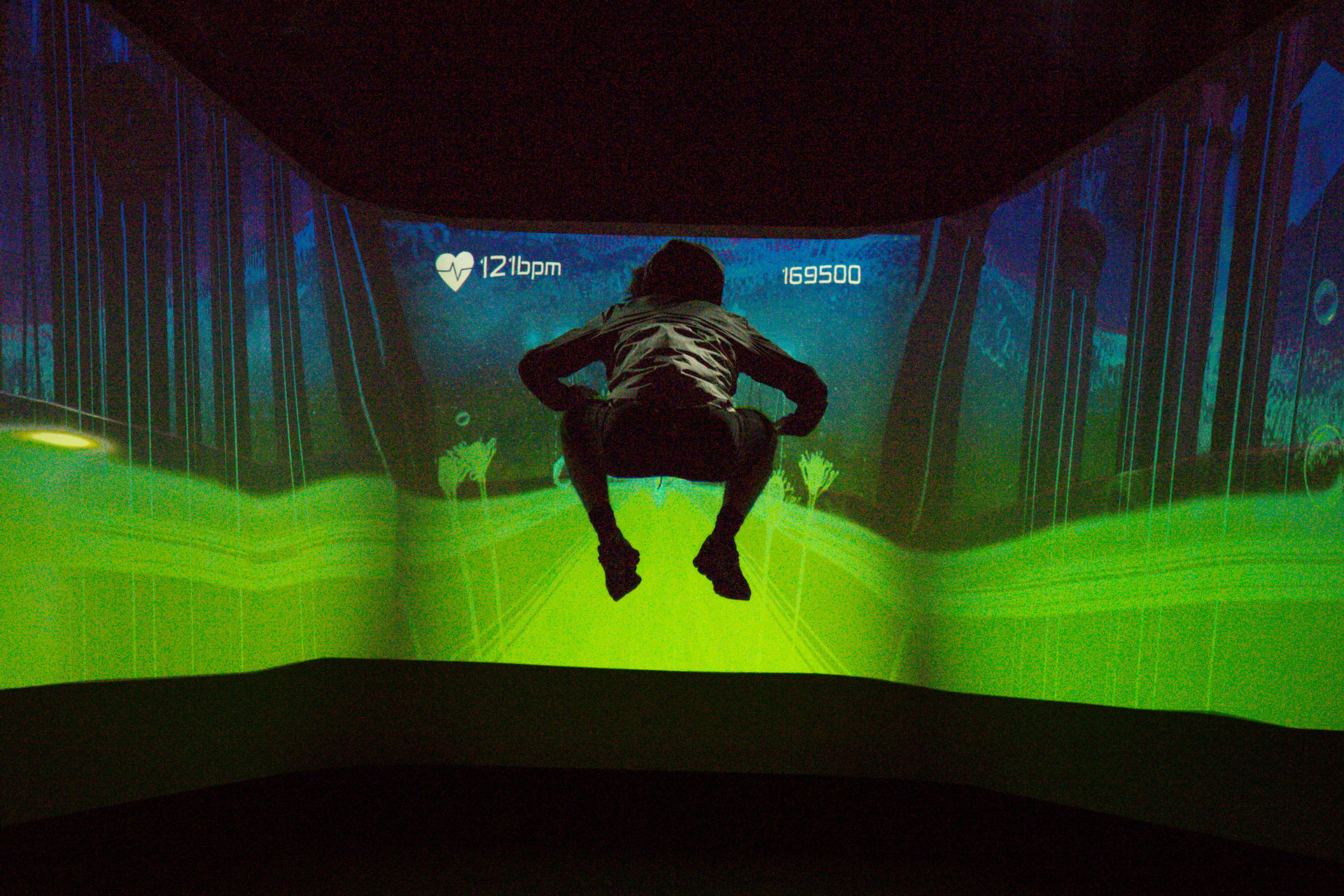 At the latest at the 2017 BEA Trade Fair in Bern, when 50,000 visitors were queuing to play “Plunder Planet” within a few days and the young researcher had to keep answering the same question time and again — “Why can’t I buy it?” — she realized: “I have to do something!” She brought on board her husband, a finance specialist and a passionate FIFA gamer, Dave Baucamp, a well networked personal trainer and movement scientist, and Helko Roth, a fitness business developer, as co-founders. Together they devised a business concept and looked for and found an investor. Sphery, her start-up, focuses on the fitness industry and embraces the trend towards gamifying different experiences: “We want to address Generation Y, the digital natives, and bring them into the gym with the help of personalizable exergames and immersive room concepts,” says the sports scientist, who has meanwhile become Sphery’s CEO. Koboldgames, located in Baden’s Technopark, is again responsible for game development: “They are burning for the same ideas and had this glitter in their eyes right from the start that I want to see in everyone I work with.”

Development with the target group

Being a businesswoman is still slightly unusual, she admits: “You need to lose the wet behind your ears as fast as possible. The support I’ve been getting from ZHdK’s Z-Kubator Programme and my business partners is invaluable in this respect.” The young entrepreneurs’ schedule is ambitious: they will soon be launching a pop-up store in Zurich, and their flagship store is due to open in spring 2019. Integral to Sphery’s business and communication concept is involving the target group in product development from the first game prototype, to build a community that keeps growing with the company. The scientific approach is also part of the company’s DNA and will be pursued further: “We are currently establishing cooperations with various universities, including ZHdK; we are reaching out to the relevant experts in all fields,” says Martin-Niedecken. She wants to continue researching, teaching and mentoring at ZHdK, even if the double workload is significant, leaving her days and weekends more than fully booked with specialist conferences, pitch trainings and start-up meetings. Yet her mission fuels her energy levels: “Our aim is to prove that games are not just for couch potatoes, but can motivate all sorts of people to do sports! I want to see exergames become Olympic!”
www.sphery.ch

25–27 October 2018 Toni-Areal, Pfingstweidstrasse 96,
Zurich digitaltag.zhdk.ch
Exergames (derived from “exercise” and “gaming”), also called Fitness Games, are a genre that includes games usable for physical exercises. The games are based on technologies that track body movements, heart rate and other physical aspects. The genre goes back to the 1980s, but the first broad-based exergames were not launched until the 1990s. Current trends in the field of exergames include VR and other technologies geared towards enabling immersive experience.
Isabelle Vloemans went through an intensive super-mario karting phase as a teenager with her brother and believes she might still see a gym from the inside for the first time thanks to Sphery. She was a project manager at ZHdK University Communications.
Teile diesen Beitrag: