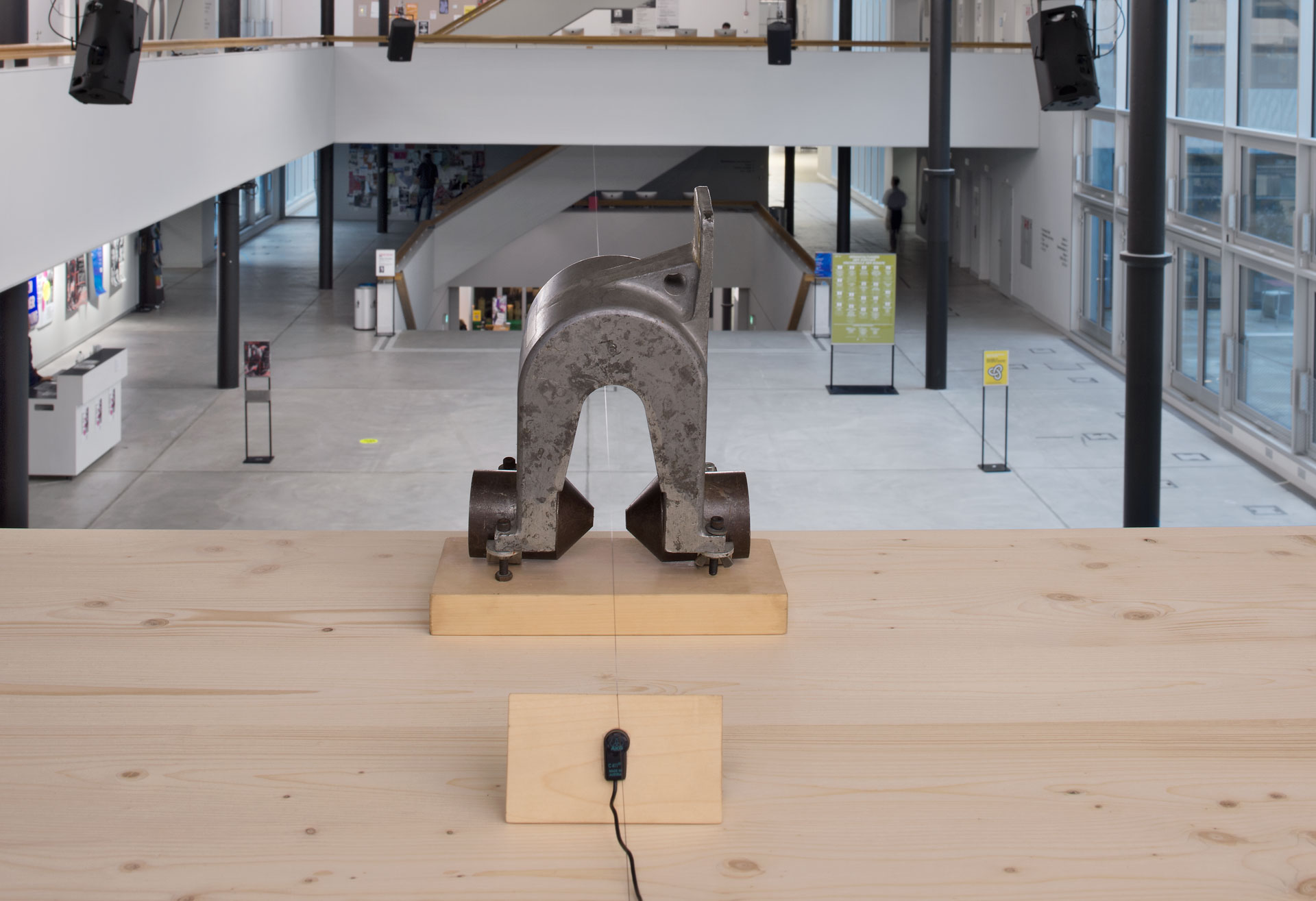 An oscillating wire is the centrepiece of Alvin Lucier’s “Music on a Long Thin Wire” (1977), which was performed at the Toni Campus in 2016. Photograph: Regula Bearth © ZHdK

Reduction as a compositional strategy

“Less is more”: this principle exerts great fascination in music. Different approaches to reducing artistic means are especially evident in contemporary music — across all styles and cultures. This leads, for example, to works in which perception becomes a theme, but also to concepts in which poetic and spiritual dimensions clearly point beyond pure sound.

If everything is possible and permitted, it can be particularly appealing to limit oneself to a few things. This has always been the case — in the history of Western music, such diverse figures as Joseph Haydn, Franz Schubert, Maurice Ravel, Anton Webern, or Igor Stravinsky come to mind: in certain particularly important moments of their work, they all developed strategies of retraction and practised the conscious avoidance of complexity.

But also and especially the music of recent decades provides much illustrative material. Works of music reduce the density of events, create spaces of experience that are determined partly by frugal décor, subtle nuances, and a sense of the elementary, and partly also by strategies of deceleration. This points to a rather broad and increasingly differentiated stream, which is sometimes described in research as the concept of reduction. This tendency extends — and this is especially remarkable — beyond stylistic boundaries, touches not only on composed music but also on improvisations and even pop music, and moreover extends to music from the most diverse regions of the world.

Asking why this is so leads to thoughts and attitudes that reach far beyond the realm of music and also concern literature and, above all, the visual arts. It goes without saying that we are dealing with a certain negation of the almost unlimited artistic possibilities available in the age of digitisation. Yet considering the all-important dimension of perception, the issue is often one of a particular sort of concentration and intensity, not infrequently also of spiritual experiences.

The Estonian composer Arvo Pärt called his compositional approach of renouncing complexity “voluntary poverty.” This points towards the spiritual aspect and alludes to the asceticism that is indispensable for monastic life. In terms of the “less is more” principle, spiritual tinges, however, often coincide with an even more determined avoidance of comfort. This can be experienced in some of the works of the Italian artist Giacinto Scelsi. His basic idea of single-tone music centred on the rich inner life of tones is strongly influenced by East Asian thinking and exhibits a sense of friction and even drama.

The poetry of sound asceticism

One of the contemporary composers whose works include radical reductionist features is Alvin Lucier, the subject of a major event lasting several days at Zurich University of the Arts in 2016. Characteristic of his works are highly original experimental arrangements. Some of Lucier’s pieces, for example, are simply about making something vibrate and about listening to subtle modulations of sound. His “Music on a Long Thin Wire” is an extreme example of this tendency, both ascetically and poetically. In this piece, which is also a sound installation and thus refers to the neighbouring visual arts, the resonances of a wire are recorded by microphones and conveyed to an amplifier system.

Lucier’s example draws attention to what is sometimes referred to as an experimental movement within 20th and 21st-century American music, which includes negating the relevant European traditions of polyphony and complexity. Especially John Cage and Morton Feldman have stimulated this movement. Cage, who was strongly influenced by Erik Satie and Zen Buddhism, created “4’33,” a piece of silence, to produce the “simply unsurpassable gesture of musical reduction” (as Peter Niklas Wilson observed in a book well worth reading on this subject). This piece is often understood as a kind of zero point in more recent music history.

The concentrate carries the comprehensive in itself

In his reductive compositional strategies, however, Feldman also operated remarkably independently of all those expectations about musical drama that are generally associated with Western music. Time and again, he contemplated what music, understood as the shaping of fulfilled time, is and achieves. Such reflections already resonate in the title of his piece “Why Patterns?” (performed by the Arc-en-Ciel ensemble at ZHdK in January 2018). Fittingly, the persistently played out tendency towards the elementary and the simple in this piece can be understood as an invitation to observe divergent sound movements. Like Cage, Feldman was significantly influenced by impulses from American painting. “The gradations of statics were perhaps the most important thing I took over from painting,” he said of such encouragement by other arts.

To be sure, the idea of reduction can be described as a topos of Western cultural history. Above all, however, this notion of artistic concentration points to the fascinating richness and diversity of contemporary music.