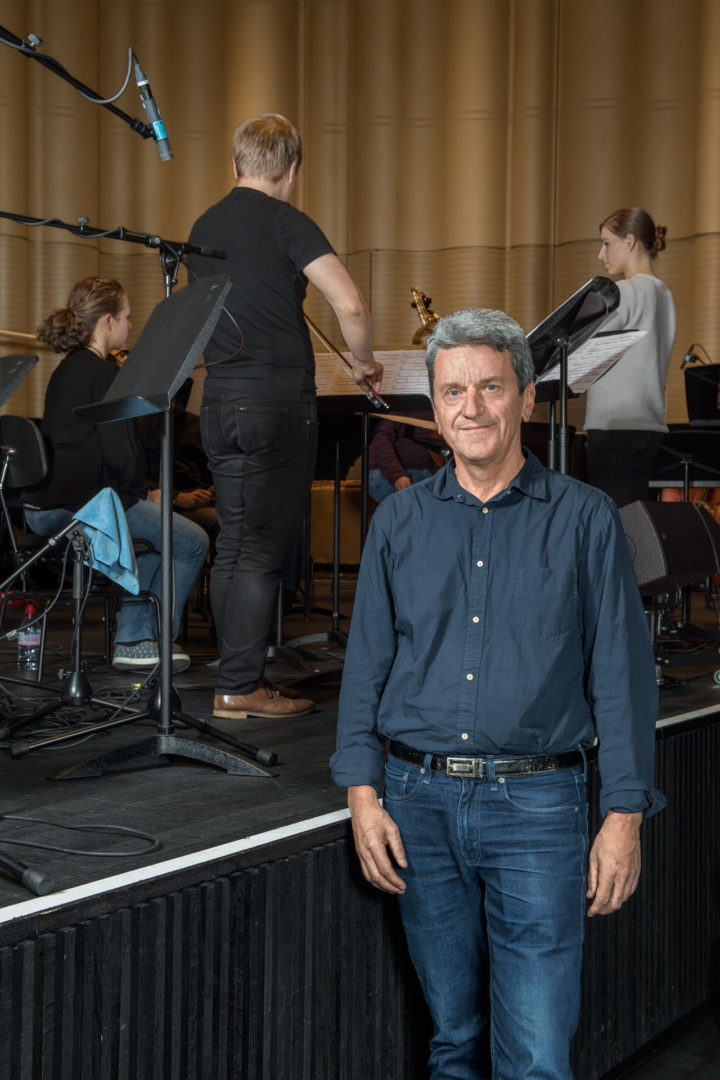 He is one of the most successful and soughtafter conductors worldwide: Professor Johannes Schlaefli, head of conducting at ZHdK and chief conductor of the Kurpfälzisches Kammerorchester Mannheim.

If you take a break at the Kaskadenkaffee, you will recognise the musicians hurrying back and forth by their instrument cases or by the fact that they are sticking together copied sheet music. However, very few people know that tomorrow’s maestri and maestre are at work in the conducting hall right behind the café. A concentrated tension: eleven musicians are following a spirited student’s cues, whose hands are faster than the string players’ bows. Occasionally, Johannes Schlaefli interrupts the rehearsal with a slight movement. He asks questions, makes short comments: “Careful now, this beat is spicy.”

Schlaefli has been running the conducting class since 1999, and is evidently doing a lot of things right. His students win international prizes, conduct top-class orchestras, and make news — not only in the concert hall. For example Mirga Gražinytė-Tyla: at the 2017 University Day, she became the first-ever recipient of the new honorary title of ZHdK Companion, which is awarded for outstanding achievements at a young age. Following her appointment as Music Director of the City of Birmingham Symphony Orchestra a year ago, the NZZ wrote about the thirty-year-old: “A star was born.”

But how do you train stars? Is there a pedagogical recipe or is the selection of students simply so good that nothing can go wrong afterwards? Schlaefli smiles and says that he doesn’t quite know where the success comes from, but then adds that applications are indeed very good. Of some fifty applicants each year, twelve are admitted to the entrance examination, and two pass. Yet despite his modesty, the good applications are undoubtedly due to the outstanding reputation of the Zurich conducting class. And if Mirga Gražinytė-Tyla, in accepting the ZHdK Companion Award, mentions that she wants to remain one of Johannes Schlaefli’s students forever, it is impossible to separate him from the formula for success.

“Your time is up,” Schlaefli tells the student. She thanks the ensemble while the next one takes his place behind the stand, welcomes the musicians, and begins his part of the rehearsal. Schlaefli observes, interrupts, asks, comments, asks again. These exchanges take place in a language barely intelligible to non-musicians. Sometimes a metaphor helps: “You are already divorced. Stay together!” — if the conductor’s gestures run away from the orchestra — or “I see your hand listening” — if after a successful cue the next note threatens to be drowned out. The mixture of short German or English sentences, along with the Italian specifications for the various tempi — “Sostenuto!”; “Incalzando!” — keeps reaping laughter. The atmosphere in the hall is highly concentrated yet relaxed at the same time.

Johannes Schlaefli is a close observer and a focused questioner. He detects every movement, no matter how small, hears every note that is hit too early or too late. His comments are concise and precise, always friendly and constructive. Even without understanding the subject matter, the observer senses what a privilege it is to be taught by this man. His students know this and value him as a teacher, as well as a person, as a companion, as an intermediary and as a mentor. One of his Master’s students describes him as a “master of the pedagogy of exemplary learning.” He adds: “Of course, we learn a lot of repertoire, but not too much. It’s better to choose something to take a step forward and apply it to analogous passages in other works.” The up-and-coming conductor appreciates that Schlaefli encourages students to find their own solutions and to develop their own inner voice.

“I would like to leave my students their individuality,” Schlaefli confirms, “and yet still wish to convey my views as incisively as possible.” The instructor’s task, in his eyes, is to provide both friction and definition without cutting off his students’ air supply. He is proud that his graduates are known for their own style. They do not conduct “à la Schlaefli,” but find their own way through him. “Freedom without randomness” is another of his dicta. Finding the right moment to ask the right question is crucial — as is keeping one’s mouth shut. Just as the conductor tells the orchestra only three things out of a hundred, Schlaefli comments little as a lecturer — but all the more precisely.

Finally, classwork plays a crucial role. Conducting is a lonely business, perhaps the loneliest of all. This, according to Schlaefli, makes learning in a group context even more important. Exchanging ideas with others helps students to discover and shape their individuality, as well as to learn how they can later help themselves. The keyword here is “self-teaching.” He sees himself as a coach rather than as an instructor, says Schlaefli, as someone who points the finger when necessary and provides tools, but no truths. He considers his job to be an incredible piece of luck. — But isn’t it also challenging, even difficult, to conduct and to teach conducting? “Cycling isn’t easy either if you don’t know anything about it,” he replies, taking his coat and heading off to Bulgaria, where his students will spend a week practising with a symphony orchestra.

Franziska Nyffenegger (franziska.nyffenegger@zhdk.ch) is a lecturer in the departments of Design and Cultural Analysis. She always struck the wrong note in singing classes and failed miserably when learning the violoncello as a teenager. www.franziska-nyffenegger.ch
Teile diesen Beitrag: