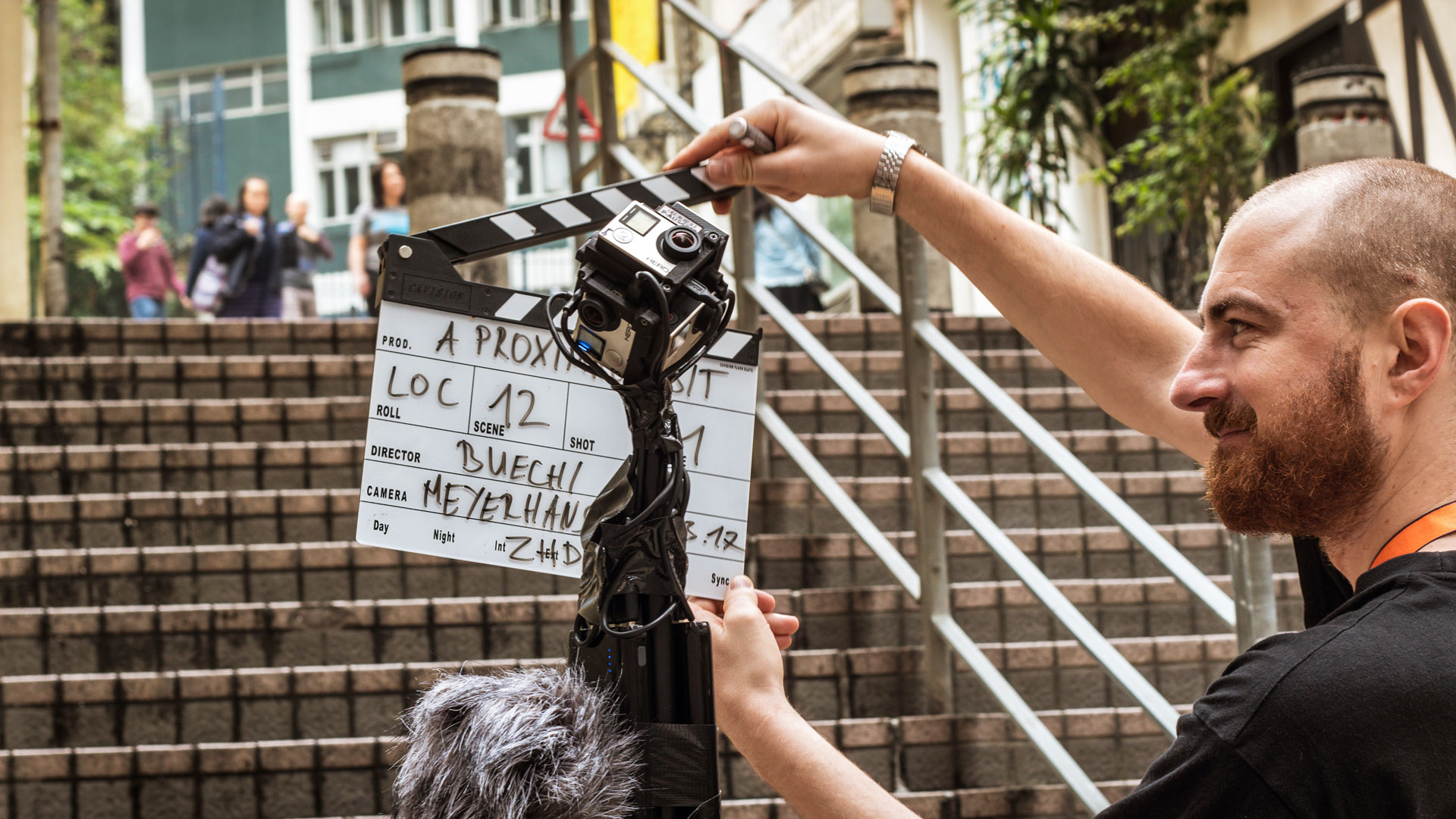 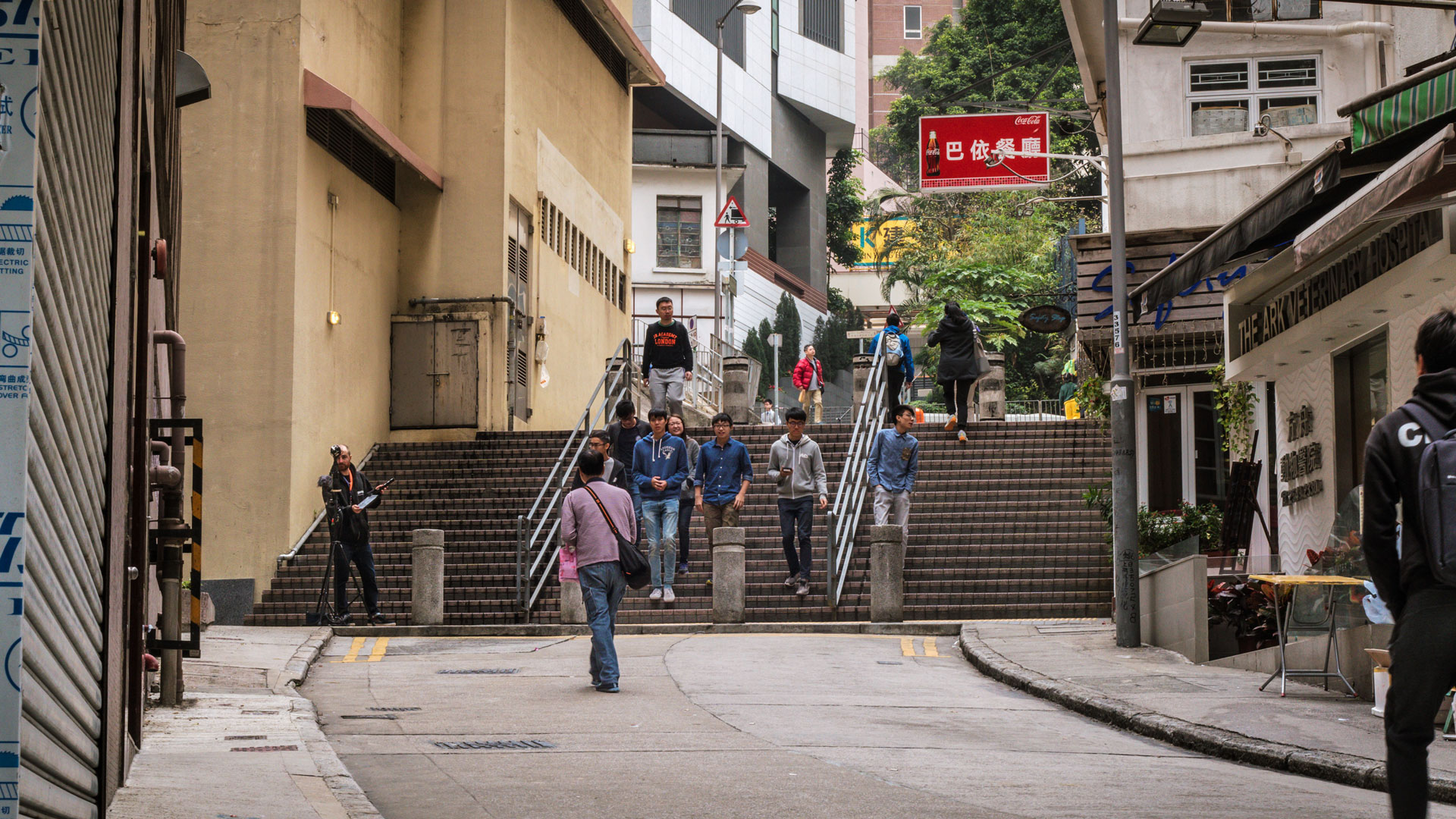 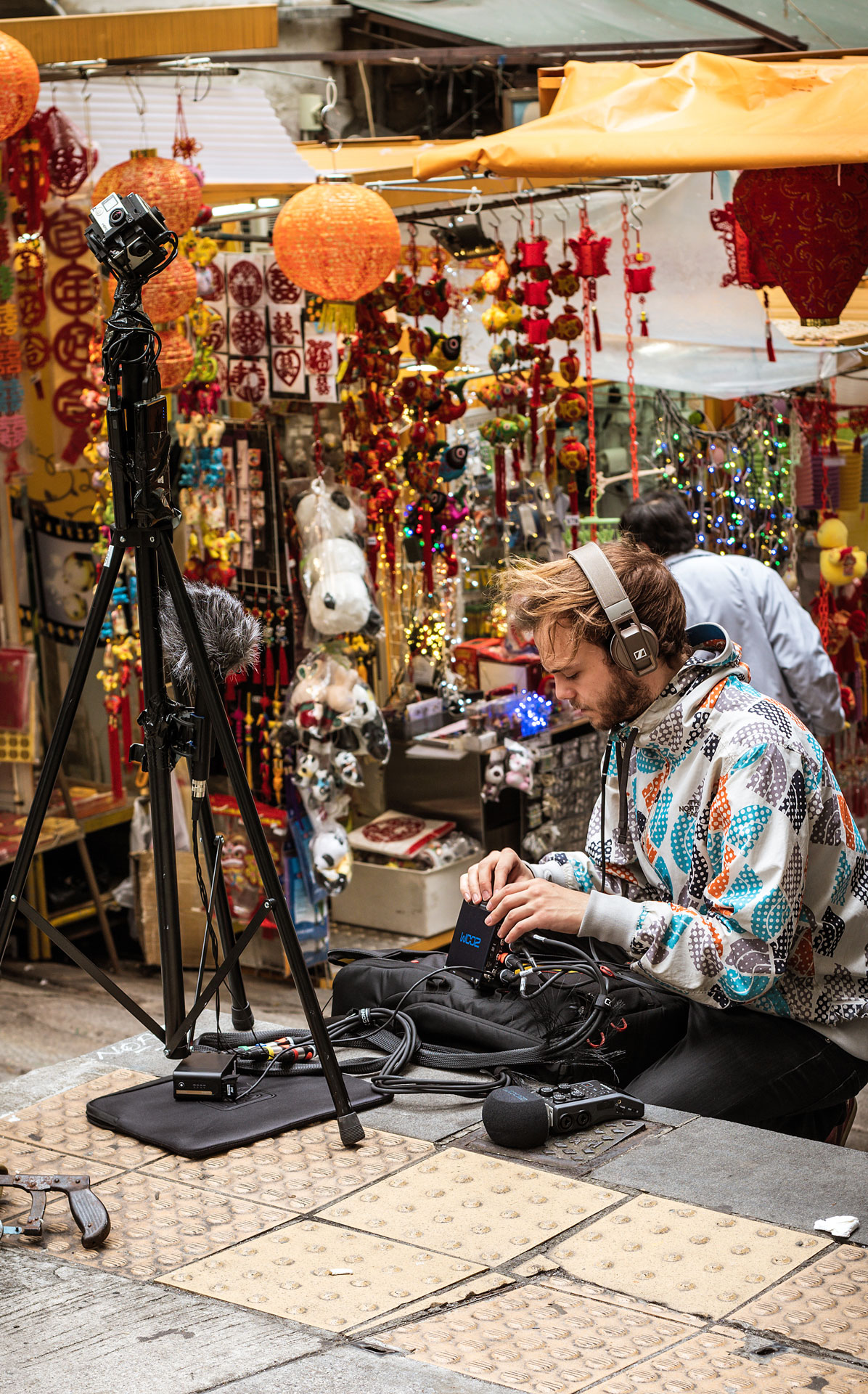 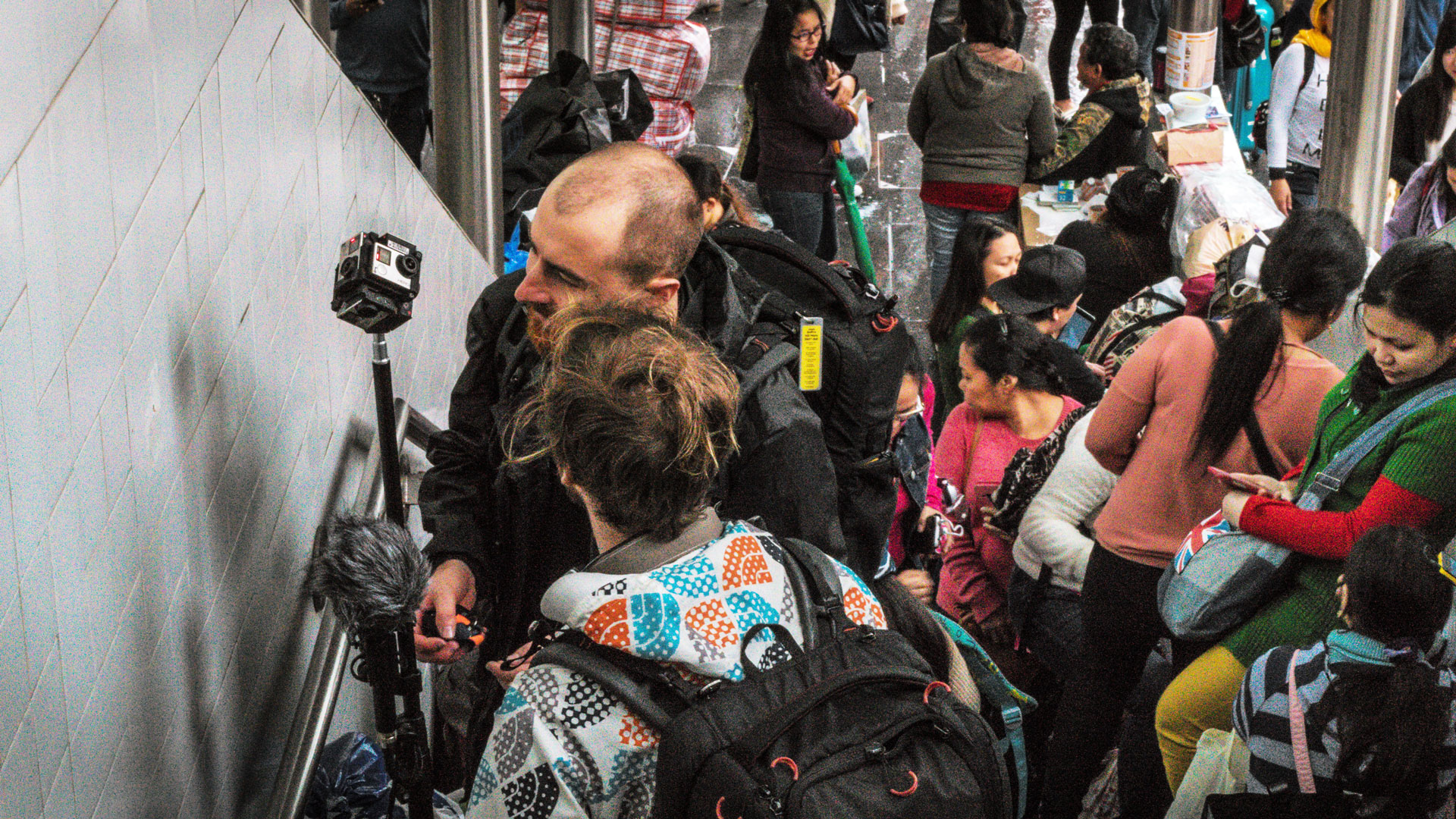 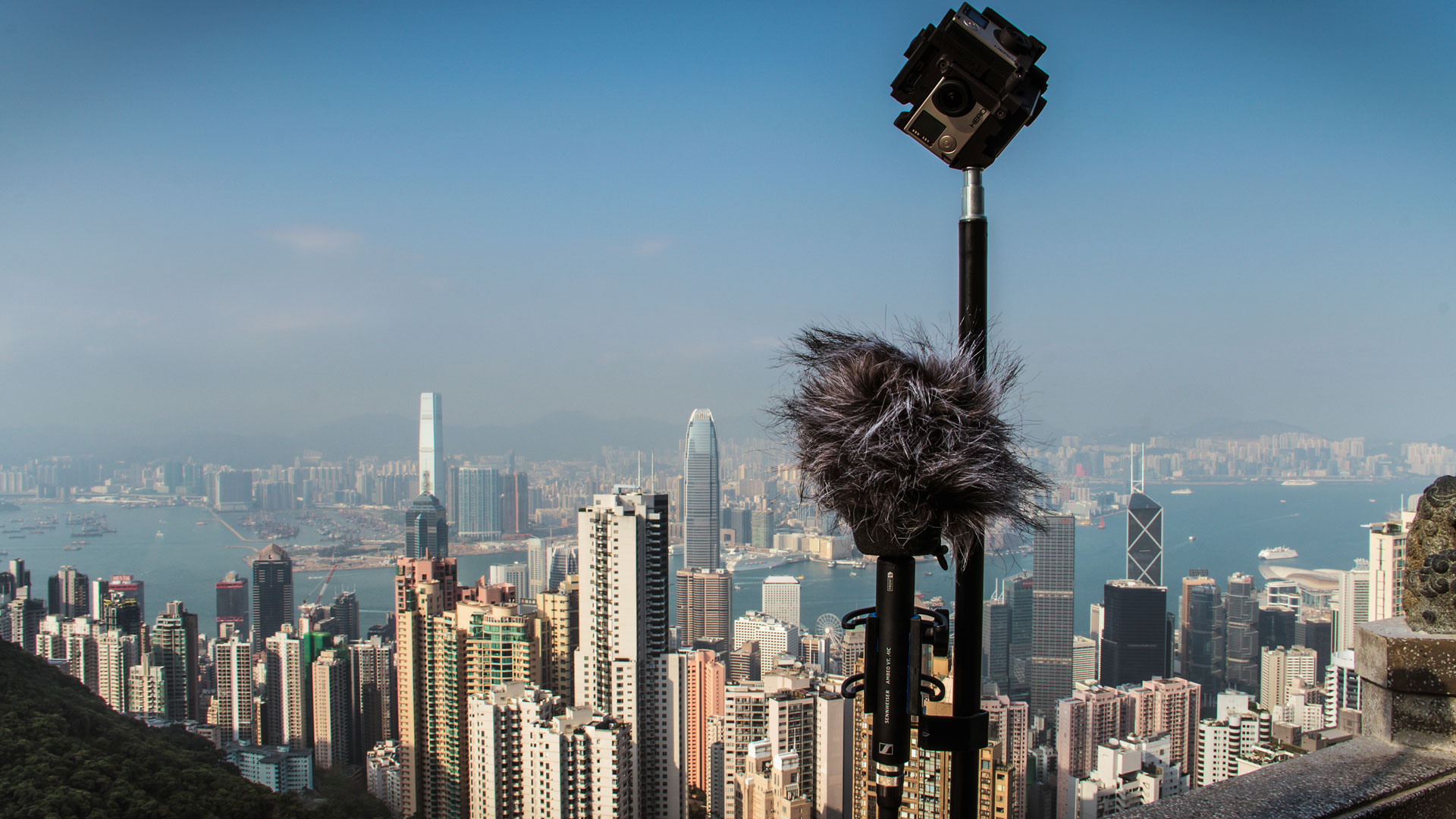 When life takes place on stairs

What the Bäckeranlage or the Josefwiese are to Zurich, the stairs between commercial premises or at public transport stations are to Hong Kong. ZHdK’s Nicolas Büchi and Alun Meyerhans’s project “A proximal visit” explores life on Hong Kong’s stairs using one of the latest digital tools: 360-degree video.

Hong Kong, one of the world’s largest cities, has a population over 7 million and is best known for its highrisers and congested streets. Green fields, parks with seating and eating opportunities, or playgrounds are a rarity here. That’s because Hong Kong is hilly, and because its few empty spaces are built up to the maximum—especially skywards. And the result? People resort to that public space that is neither privately owned nor regulated: stairs. Countless housemaids and schoolchildren spend their breaks there, as do people on their time off from work, or those running market stalls or throwing parties. So what is life like on Hong Kong’s stairs? Which role do they play in society? How are they perceived?

360-degree video as a tool of cultural reasearch

Melissa Cate Christ, a researcher and professor at the Polytechnic University of Hong Kong, has long been exploring these questions. Her research as a designer and landscape architect looks at the socio-cultural importance of stairs in Hong Kong. When Melissa Cate Christ approached Nuria Krämer, the Connecting Spaces Hong Kong – Zurich Curator, with her project, Nuria instantly realised that producers Nicolas Büchi and Alun Meyerhans from ZHdK’s Cast / Audiovisual Media Programme would be the perfect project partners. The idea was to use 360-degree videos as a primary source of research.

Exploring life on stairs beyond boundaries

“The Cast / Audiovisual Media Programme at ZHdK is a leader in the field of journalistic and documentary video productions in Switzerland,” says Nicolas Büchi. It has pioneered the use of 360-degree video — a new digital tool — for instance, in its 360-degree fear videos (2016) or with the Bux app. Using these videos has allowed ZHdK researchers to enter unchartered territory. Nicolas Büchi: “Adopting a neutral and objective approach is immensely important in research. The 360-degree video enables us to do just that.” 360-degree videos serve research as primary sources. Contrary to 2D research videos, 360-degree videos are liberated from dramaturgical or other constraints imposed by editing and selecting images. They offer innovative and new approaches to research, not only on the visual but also on the acoustic level. Büchi and Meyerhans have therefore also brought sound designer Thomas Rechberger from one of ZHdK’s composition classes onto their team. “3D audio provides a completely new level of immersion. You can not only see the actual pictures, but also the actual sounds,” says Rechberger. This is made possible by the prototype of a special 3D microphone provided by Sennheiser.

A new tool with potential

“A proximal visit” was recorded over a period of two weeks in Hong Kong before entering two months of post-production in Zurich. Have all the time and effort been worthwhile? Indeed, they have. And how: besides an exhibition shown in May 2017 in Hong Kong, the team has since received lots of positive feedback, among others, from the Department of Film Studies at Zurich University. And the University of Hong Kong is keen to integrate the videos into its research database. “‘A proximal visit’ was only possible thanks to broad-based support from various institutions in Hong Kong and Switzerland,” says Büchi looking back at the project. While the project is now completed, “the potential of 360-degree videos is far from exhausted,” he adds. The Cast / Audiovisual Programme will remain involved in the field of 360-degree videos. Büchi has already received enquiries for further projects. And, who knows, perhaps “A proximal visit” will already soon be screened at a film festival.

www.winterlife.com/aproximalvisit
Connecting Spaces Hong Kong – Zurich is a transdisciplinary and transcultural project initiated by ZHdK. Its two main aims are to explore perspectives and opportunities for cooperations between Hong Kong and Zurich and to consider the future of arts universities in the global 21st century.
www.connectingspaces.ch
Valérie Hug (valerie.hug@zhdk.ch) is studying Cultural Publishing at ZHdK and was a communications intern at ZHdK.
Teile diesen Beitrag: