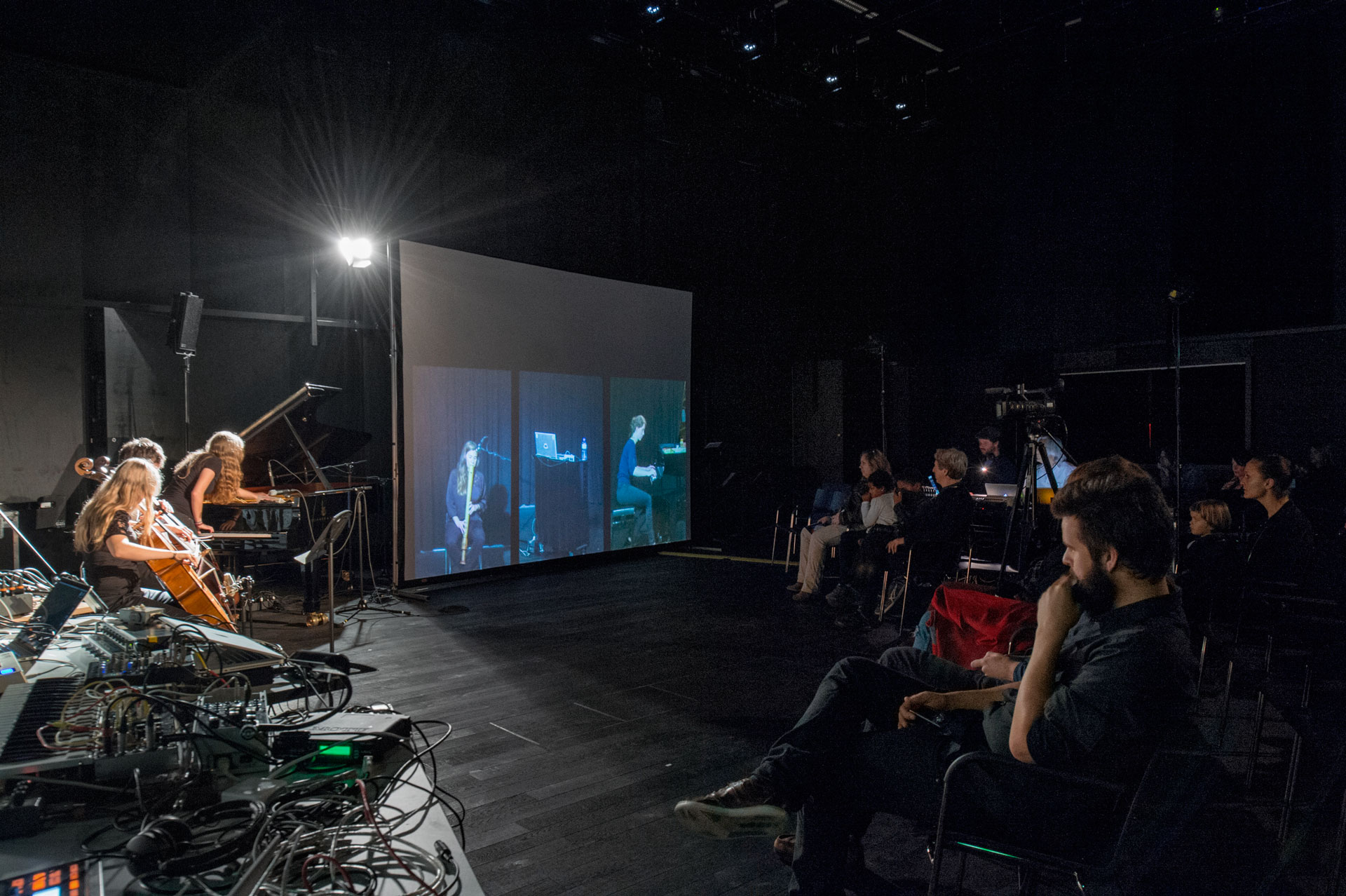 ZHdK has been researching the potential of digitisation for the concert sector for several years. Telematic concert with Bern University of the Arts, October 2014. Photographs: Regula Bearth © ZHdK

Live concert or canned sound? — Many new facets have enriched the age-old debate over which of these two formats should be preferred. Today’s concert hall is no longer confined to physical presence, but has become digital, that is, virtual. ZHdK is engaging in this development in various ways: we are now streaming our concerts, playing music across continental boundaries, and establishing virtual 3D sound spaces.

ZHdK’s relocation to its new Toni Campus in summer 2014 gave the development toward the digital concert hall a decisive thrust. Martin Huber, orchestra manager at the Department of Music, explains: “The excellent wiring and infrastructure at the Toni Campus almost obliges us. The state-of-the-art technology demands to be used, in order to extend the reach of our students’ music and to showcase its impressive productivity.” Thus it has almost become a habit to livestream performances from the 400-capacity Great Concert Hall to other audiences at one of the smaller venues on campus or to broadcast ZHdK events live from external venues across the world via Youtube. Two years ago, we also began broadcasting competition auditions. The resulting videos are accessible to students, to help them extend their artistic portfolio. The livestreams reach an astonishingly large audience, as Martin Huber confirms: The Youtube Channel “ZHdK Music” was accessed over 36,000 times in two years.

Andreas Werner, a sound engineer on the ZHdK faculty, predicts a productive future for livestreaming: “It has many faces, from a small camera positioned in the last row (as seen with an Italian orchestra) to the Berlin Philharmonic Orchestra’s high-end pay stream. I was rather skeptical at first. Mind you, when I realized how far afield audiences across the world were pursuing events at ZHdK, I had to change my mind. Accolades were arriving from Syria, Mongolia, Nepal, and other locations—mostly from young people whom our streams enabled to engage with Western music.”

It was already at a fledgling stage of technological development that ZHdK recognised the innovative potential of broadcasting not only images and sound to loudspeakers and screens abroad, but also of storing and conveying the actual sound space as a three-dimensional entity. Directed by Andreas Werner, a research project at the Institute for Computer Music and Sound Technology (ICST) has accomplished pioneering work in this domain. The ICST project addresses a highly topical issue, as sound engineer Lars Dölle reports: “3D audio technology has sparked controversy among experts for several years. There is talk of the future of audio technology, of a quantum leap, of a revolution. But so far, it’s mostly cinemas that have been converted to 3D whereas the terrific potential in the area of live performances has barely been tapped.”

To mark the opening of its Great Concert Hall, ZHdK produced a live 3D transmission to one of the smaller concert halls on campus as early as October 2015. Lars Dölle recalls the successful inauguration: “We were able to palpably and feasibly reproduce the hall’s depth and the orchestra’s staggered seating.” Andreas Werner adds: “There were standing ovations and bravos although no musicians were physically present in the hall!” Further productions are planned. 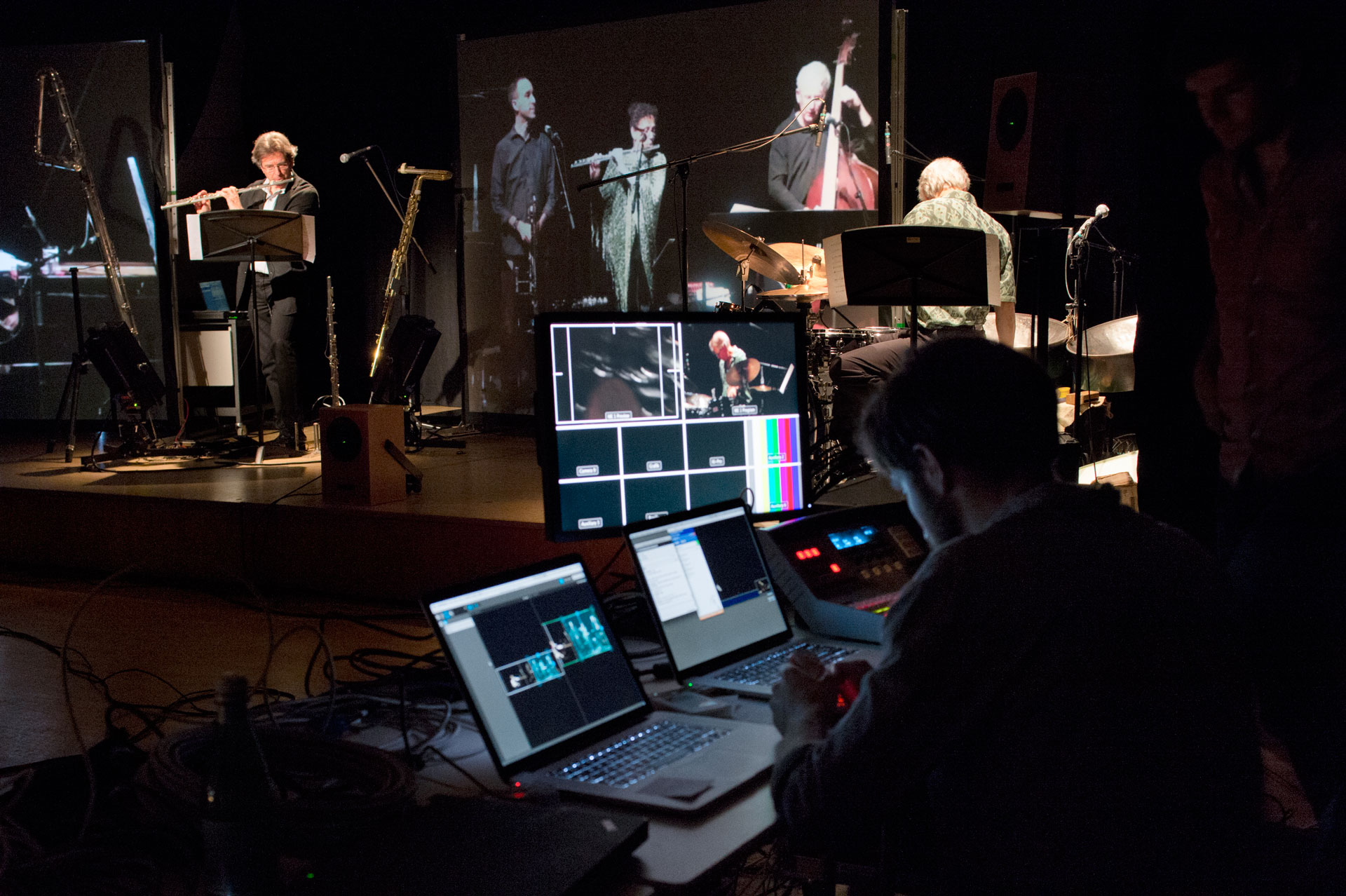 A telematic concert with the University of California in San Diego, 2013. Matthias Ziegler, ZHdK lecturer and researcher, on the flute. Photograph: Regula Bearth © ZHdK

Telematics: toward the digital classroom

Once high-quality remote transmission is ensured, one can consider producing events not only involving an audience on one side, but active musicians on both sides. Thus the joint concert goes global, and the concert hall extends across continents. Matthias Ziegler has been experimenting with such “telematic concerts” for years: “Four musicians are playing in San Diego, two in Zurich, and yet they’re still playing together. Sound and image are broadcast via the Internet, and two parallel concerts become fused into a telematic concert.” Using the images from San Diego and Zurich, two VJs design the concert’s visual appearance using on-the-spot projections.

The concept, which has been implemented live no less than eight times since 2013, has since become a research project funded by the Swiss National Science Foundation SNSF. The music performed is improvised, so that transmission is no longer restricted merely to stored sounds and images. Rather, “the musical process of compositions and improvisations is determined in a simultaneous overlapping of the music emanating from both sources. So while the music is identical at both venues, its visual design at the digital interface is distinct.” The next opportunity to experience this marvellous innovation will be in October 2017, in a joint production with the Hong Kong New Music Ensemble. A two-day symposium on network performance is also planned. And yet Matthias Ziegler’s intentions reach beyond the artistic dimension: “One aim of the Telematics project is to develop a tool for the bidirectional exchange of sound and image that could also be used in classroom teaching.” Thus the digital classroom is already being experimented with. Telematic education is the next step.