Portrait of Jonas Voegeli, Head of the BA Visual Communication 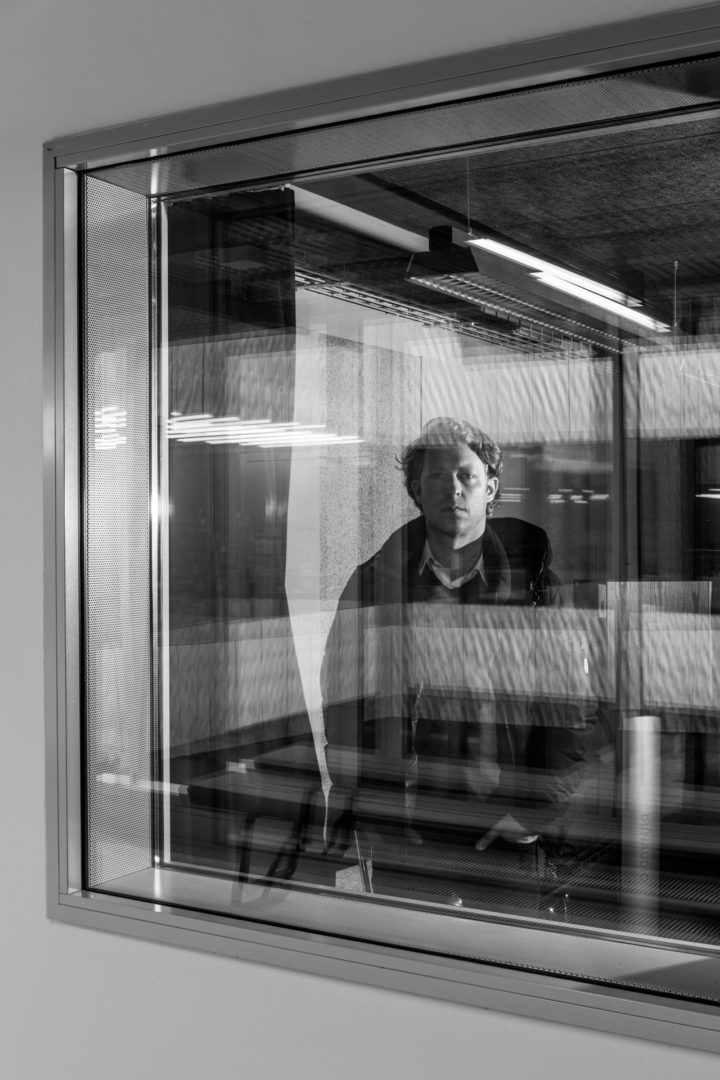 References matter — in training and in practice: Jonas Voegeli behind the windows of a Toni seminar room. Photograph: Betty Fleck © ZHdK

Jonas Voegeli heads the visual communication programme at Zurich University of the Arts and is responsible for curriculum development. He doesn’t only teach students graphic design expertise and the value of solid theoretical fundamentals, but also how to best present their work. Based on his longstanding experience, the owner of Hubertus Design GmbH knows: “Finding design solutions is one matter, but in daily professional life being able to convincingly present one’s conceptual approach and to argue one’s design decisions is crucial.”

ZHdK’s Toni Campus rises into the bright February sky. The building, which still looks new, is glistening in the unexpectedly warm sunshine. Jonas Voegeli, Head of the BA Visual Communication, is walking along the northern façade of the Toni Campus toward the Mehrspur Music Club. Several students doing a practice module are taking a break outside one of the design studios. A second-semester visual communication student jogs up to Voegeli seeking his advice. The student wants to look in on a fourth-semester portfolio presentation, against his module director’s wishes, because other matters are on the programme. Voegeli immediately negotiates a compromise. Scaling the stairs to level 4, he smiles. “Actually, I’m doing what I was doing at other design schools: teaching editorial design. But now I’ve also got management duties, which include dealing with the foreseeable and the unforeseeable.”

One of his long-term, foreseeable tasks is curriculum development. Visual communication coursework — apart from Theory Mondays — is structured into consecutive thematic modules, which usually last two to five weeks. The first semester focuses on designing and sketching, type design, drawing, and photography, with tasks becoming increasingly complex. “We also try to directly interrelate the various modules. For instance, I go along to a photography module and give an input talk. The students then bring along their photographic work to my editorial design module, where they add textual material to the images and develop a layout and a dramaturgy.” On the one hand, Voegeli wants students to learn the basic skills from scratch; on the other, he highlights the importance of producing finished products already early on. “I come from a family of teachers and have an ambivalent attitude toward pedagogics,” he says, “but I take knowledge transfer and developing practical skills very seriously.”

“I come from a family of teachers and have an ambivalent attitude toward pedagogics.”

Another of Voegeli’s important concerns is critical reflection on the history of the discipline: “Analysing historical knowledge and practices constantly provides interesting connections.” For instance, the catalogues designed by Ursula and Ernst Hiestand for the ABM supermarket chain in the 1960s served as a reference point in a recent editorial design module. “The catalogues are an exciting example of editorial design because they not only fulfilled a clearly defined, market-driven purpose, but also because the Hiestands took charge of the entire design process from start to finish — from the initial concept through the photographic work to the lithographic process and layouting.” Besides, the Hiestands called in experts like the concrete poet Eugen Gomringer, who wrote the catalogue texts. “I especially liked the slogan ‘Sympathetic Prices,’” Voegeli adds. “But at an event that we attended with students, Gomringer, meanwhile 92-years-old, observed that ‘Empathetic Prices’ was a slogan better suited to today.”

“Students should learn to present their work.”

A typical Voegeli module begins with a two-hour talk, in which he explains the assignment using examples from design history and his own professional practice. The students then tackle the various predefined steps and, depending on the step, individual sessions are held every one or two days. “That’s intense, but important, because students should learn to present their work.” Learning this key skill also involves giving internal portfolio presentations, at the beginning of the fourth and sixth semesters. “Finding design solutions is one matter, but in daily professional life being able to convincingly present one’s conceptual approach and to argue one’s design decisions is crucial.” Students can build these skills in extracurricular projects run in cooperation with industry partners.

“Finding design solutions is one matter, but in daily professional life being able to convincingly present one’s conceptual approach and to argue one’s design decisions is crucial.”

To credibly link teaching to practice, Voegeli divides his time between ZHdK and Hubertus Design, his design agency, located in an old factory hall in Albisrieden. Voegeli’s team shares a large table at the centre of the bright, large space: business partner Kerstin Landis, a permanent team member, a freelancer, and a trainee. Another team member runs the one-person Hubertus branch in Brooklyn’s Dumbo neighbourhood. “He’s American, studied here, worked for us for four years, but we still didn’t manage to get him a work permit,” Voegeli explains.

“It’s difficult to present a differentiated argument on a poster; you need other media.”

Lying on a side table at the Albisrieden agency is a copy of the new Zett (no kidding!), designed by a group of Voegeli’s students. Hanging on the walls are posters designed for Miller’s Studio, Councillor Paul Rechsteiner, and the Trade Union Council. Like the “No” posters designed for the Enforcement Initiative, two other Hubertus posters — one for Labour Day, the other for the most recent AHV Initiative (the national pension scheme) — experiment with large, distorted lettering. “It’s difficult to present a differentiated argument on a poster,” Voegeli points out and adds, “you need other media.” So it’s probably hardly a coincidence that most Hubertus work has concentrated on book design. Voegeli has established close ties with clients in the arts and culture and in science and has won many (also international) prizes. “The awards have prompted invitations to Russia and Asia, to give talks and to jury editorial design competitions. One competition, in Taiwan, involved judging books in which I couldn’t read a word.”

Jonas Voegeli takes these things with a sense of humour, but he also recognises the limits of transcultural transfer. To illustrate this, he pulls out a copy of the recently published Chinese edition of Josef Müller-Brockmann’s “Grid systems in graphic design” (1981), a late classic of Swiss Design. Since not only all the examples — including the German text! — were preserved, but also the original layout, the Chinese texts occupy columns originally defined for the German text. The parallel English text was omitted, leaving the Chinese edition full of arbitrary white spaces, which would surely have displeased the author.

When we part company, I mention that from a historical distance Müller-Brockmann’s books seem slightly aloof and dogmatic. Voegeli agrees. He compares them to Jan Tschichold’s textbooks: these were also dogmatic, but their language and argumentation were much more elaborate. Voegeli still considers Müller-Brockmann interesting as he represents a generation of designers that still published texts. “These days, I often miss the fact that designers no longer write about their work, nor formulate design theories.”

Tan Wälchli (tan.waelchli@zhdk.ch) is a literary scholar and a theory lecturer at ZHdK. He is currently pursuing postdoctoral studies (a “Habilitation”) at Basel University’s Department of German.
Teile diesen Beitrag: