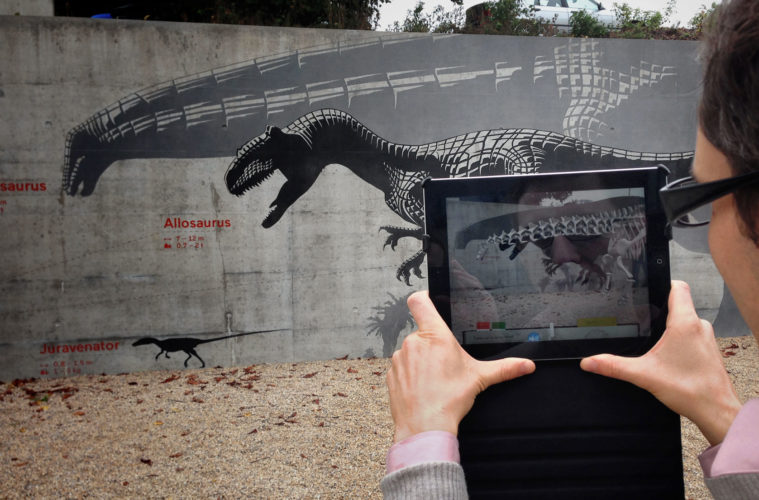 “Paléoskop” brings dinosaurs back to life at the Dinotec site in Porrentruy. This educational project emerged from a Master’s thesis in Knowledge Visualization. Photograph: © ikonaut

Immersing ourselves into alternative realities

Do you want to glide through the sky like a red kite or face a tarantula face to face? — What was once privy to the imagination, is now open to virtual experience. Zurich University of the Arts is propelling developments that will radically change daily life. ZHdK researchers are not just exploring new technologies and developing new devices, but are also fathoming new contents and “experience.”

While terms like VR (Virtual Reality), AR (Augmented, i.e., Expanded Reality), and 360° Experience are on everyone’s lips, the concepts underpinning the multisensory generation of alternative experiences of reality are not new. Experiments involving flight simulators, Smell-o-Vision, or cinerama projection were already familiar in the last century. The conceptual and technological foundations of today’s VR technology were laid in the 1980s and 90s: Visionary discussions took place in the relevant scholarly literature (the pioneering writings of Jaron Lanier), but also in prose (William Gibson’s Neuroromancer), cinema (Lawnmower Man), and art (the works of Maurice Benayoun).

Today, we are experiencing the second wave: Development devices and surroundings have become affordable, users (partly) own the corresponding terminal devices, and the hype about “immersion” — steeping oneself into a virtual reality — is attracting growing attention from the media, private enterprise, and higher education. 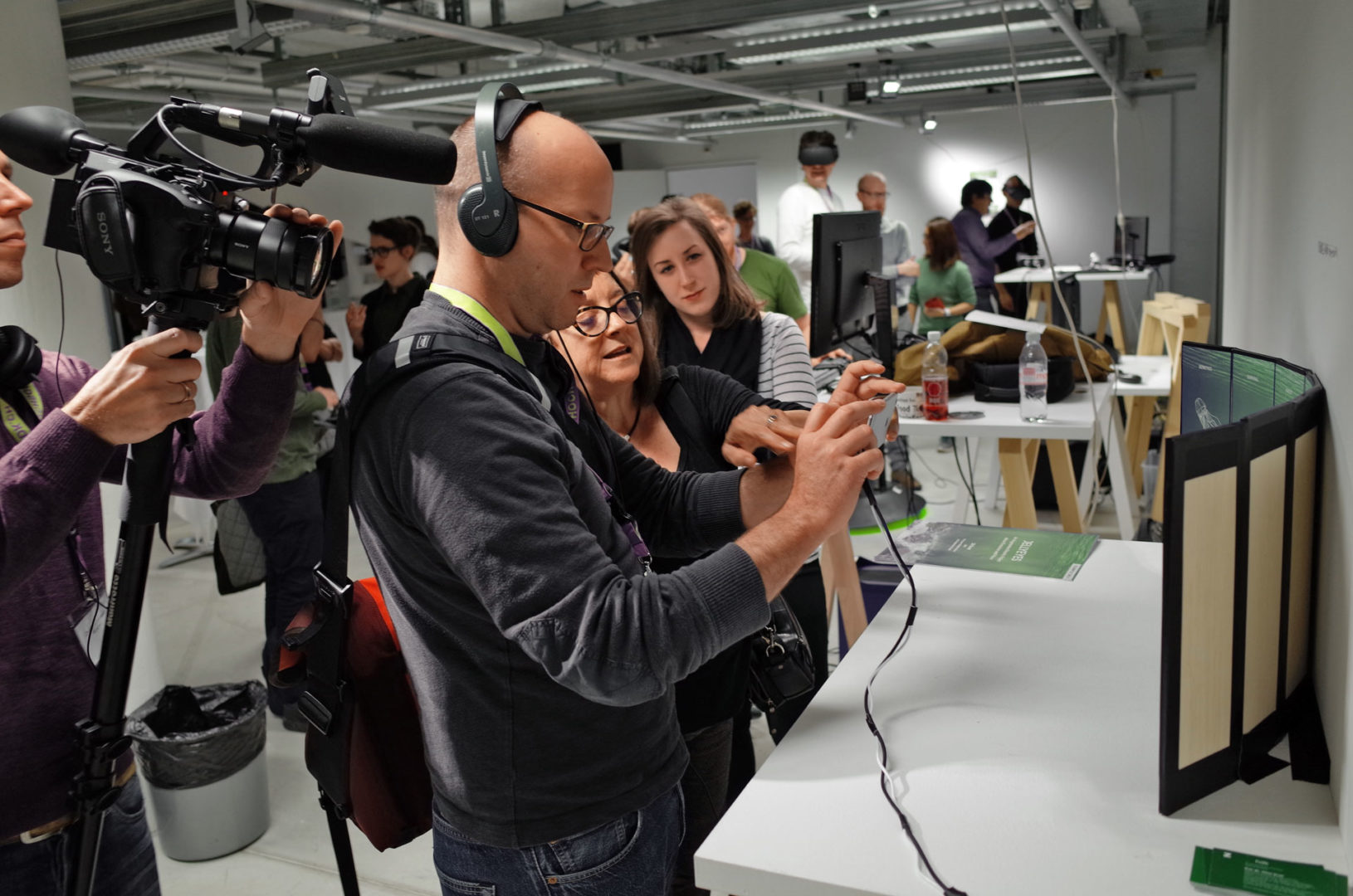 The broad range of technologies and disciplines, not to mention expert opinions, is also manifest at ZHdK. The best known example of VR projects at ZHdK is “Birdly,” the world’s first bird-flight simulator. Max Rheiner, the responsible project leader and head of the Master of Arts in Interaction Design, has been researching immersive technologies since the 1990s. These will now be explored from a holistic design perspective at the emerging Immersive Experience Lab. “Interacting with experience is important. We’re interested in discovering new combinations and correlations, for instance, between the locomotor system and the sense of smell,” Rheiner explains.

In 2016, Rheiner and Jonas Christen, a research associate at ZHdK’s Knowledge Visualization Programme, organised an international conference on “Expanding Immersive Design.” “We are deliberately not talking about VR, but about immersive technologies in general,” says Christen, who runs Zurich’s VR Meetup Group. “Immersion is the ultimate medium, because it’s able to simulate all media. It isn’t new because it replaces old media, but because it makes them newly accessible.” Christen sees great opportunities for the therapy sector, but also for education. Thus, the Knowledge Visualization Programme has been carrying out VR/AR projects on knowledge transfer since 2015, including “Paléoskop. Den Sauriern auf der Spur” or its current research project “2°C-VR.”

Focusing on VR in classical cinematic-fictional or journalistic-documentary formats, the most recent research project of ZHdK’s Cast / Audiovisual Media Programme also has a therapeutic-exploratory orientation. Thus, “ANGST360” researches phobias in the context of 360° films. The films are retrievable via a VR app (using Samsung Gear VR Smartglasses or via YouTube on Google Cardboard and on desktop). The Cast / Audiovisual Media Programme is also pursuing cross-departmental ventures. One of these involves ZHdK’s Research Focus in Film and the Film Programme at ZDOK.17, Zurich’s Documentary Film Symposium, “Being There: Verisimilitude in Documentaries from Direct Cinema to Virtual Reality.” 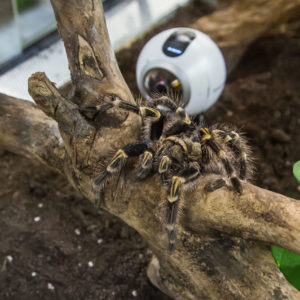 “Interactivity isn’t absolutely necessary for creating empathy,” says Martin Zimper, head of Cast / Audiovisual Media. “What interests us specifically about new techologies is: Which stories do they enable us to tell? In the audience’s eyes, the new technology creates intimacy with both protagonists and spaces.” Zimper emphasises that “we are daring to experiment; we’re allowed to make mistakes and to learn from them.”

Other experiments — in the area of VR and art — are ongoing in the Immersive Lab, an installation-like, participatory research setting at the Institute for Computer Music and Sound Technology, which brings together artistic ideas and visions from the areas of sound, image, and interaction.

When the line of sight replaces the mouse

ZHdK’s Game Design Programme has been experimenting with immersive game scenarios involving new technologies since 2008. Sonja Böckler, a Game Design graduate, looks back at how she designed “Meantime,” a VR game developed for Oculus Rift, a pair of smart goggles: “In the beginning, it required quite some effort to think our way immersively into the phenomena. Resolution was already better with the second Oculus generation, but it was a bit like peering through a keyhole. We didn’t want to navigate with a mouse, but with the line of sight.” Böckler considers HTC Vive (2016) even more immersive because these Smartglasses add a haptic dimension to the existing visual and acoustic ones: The two hand controllers supplied along with HTC Vive simulate actual hand movements. 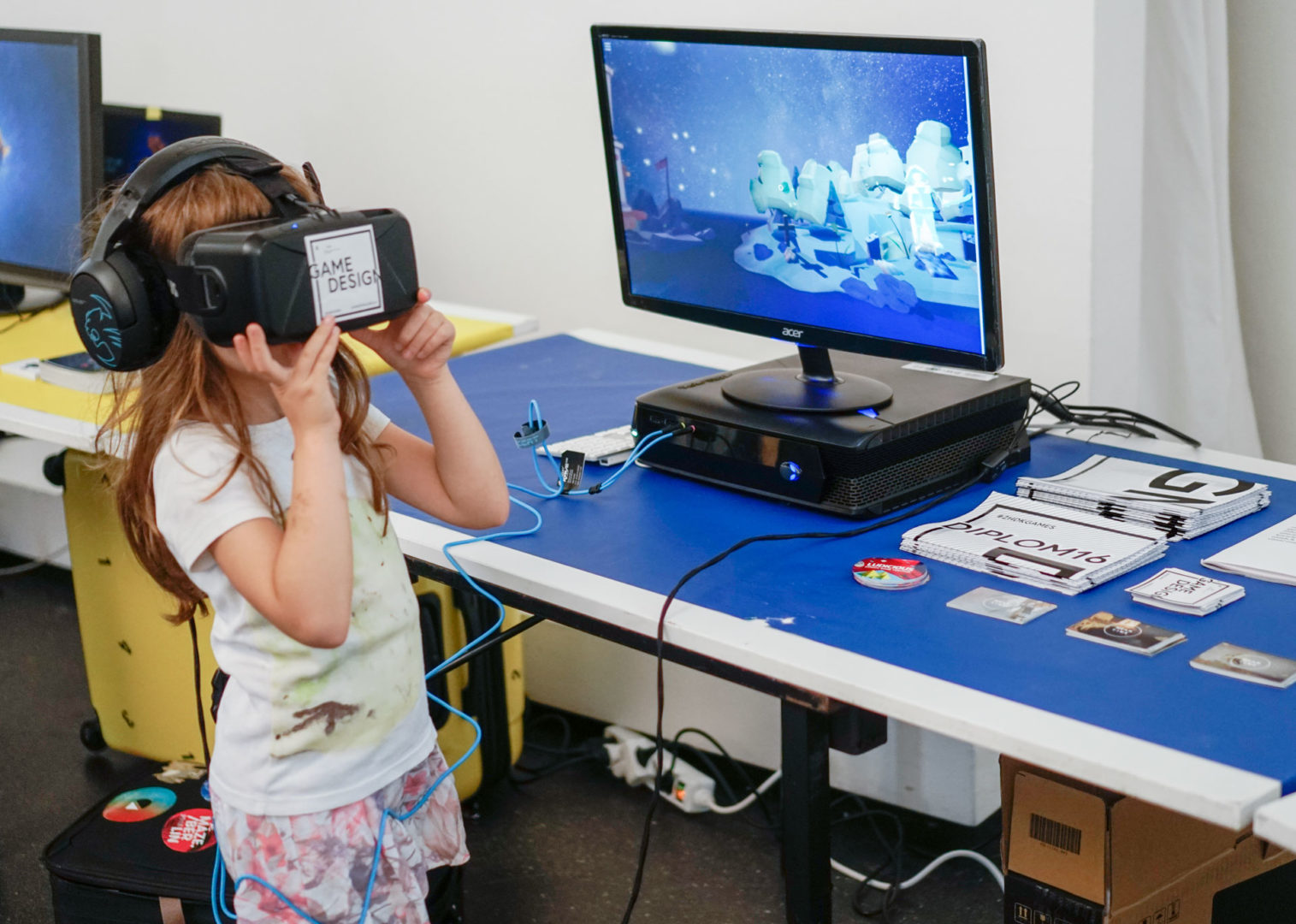 René Bauer, head of the Master of Arts in Game Design, points out that the immersion debate focuses less on technology than on game mechanics: “Overall, it’s more about motivation design than immersion. Why do we want to enter virtual realities? How to design a game that makes people spend time there or return later? And how does one get back out?”

So, ultimately, it’s about designing (even more) deceptively real worlds. Will the ultimative illusion of immersion occur in a closed-off, sheltered virtual reality, or will the real world be cross-faded with data, as is the case with AR technology? And do these key technologies serve enlightenment, entertainment, or the ideological embellishment of a world undergoing radical change? — Expert opinions at ZHdK may vary, but one common desideratum appears to be more interdisciplinary synergies, through which knowledge can be shared and enlarged. “Immerse it!”