A home for design icons 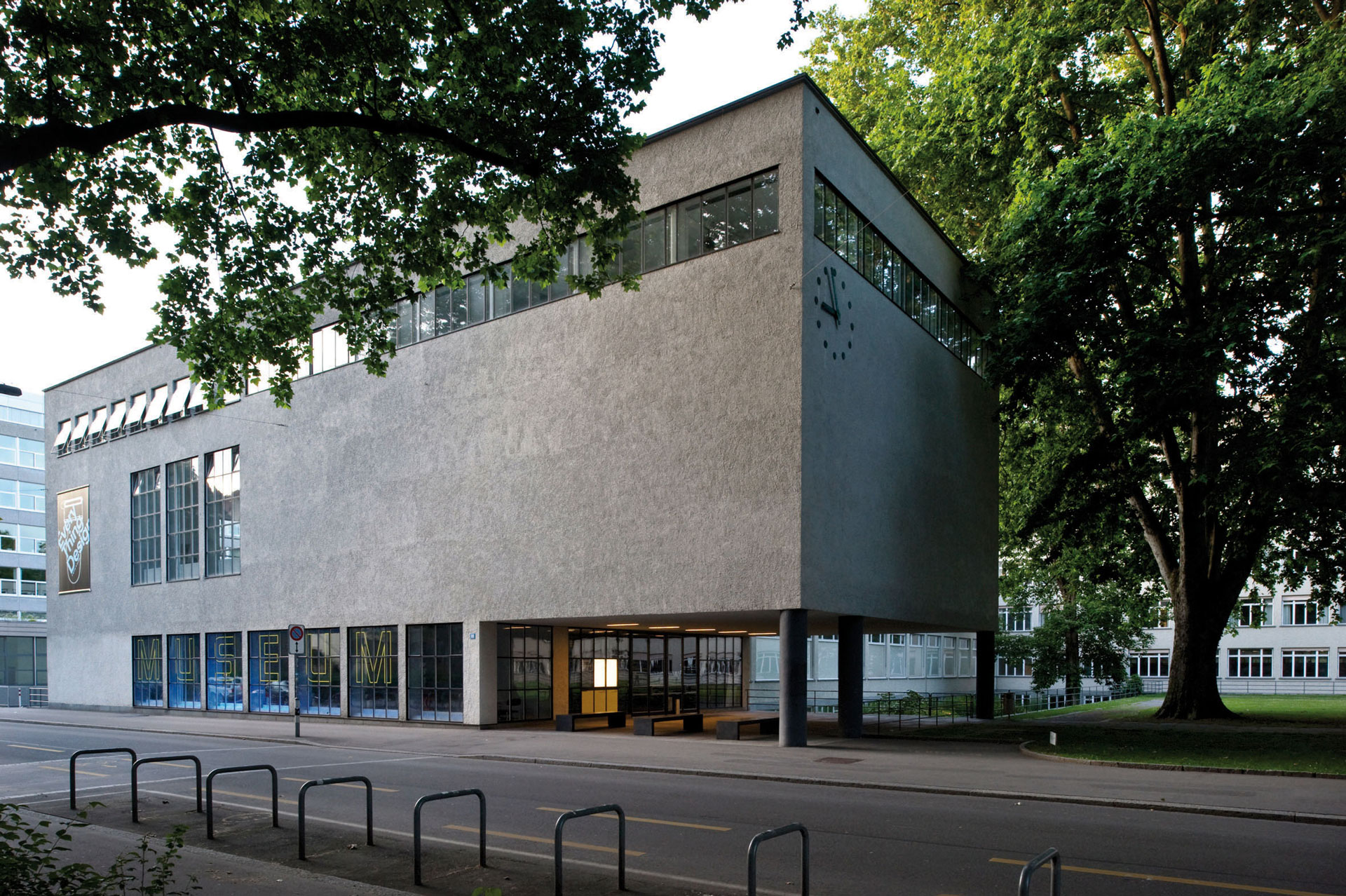 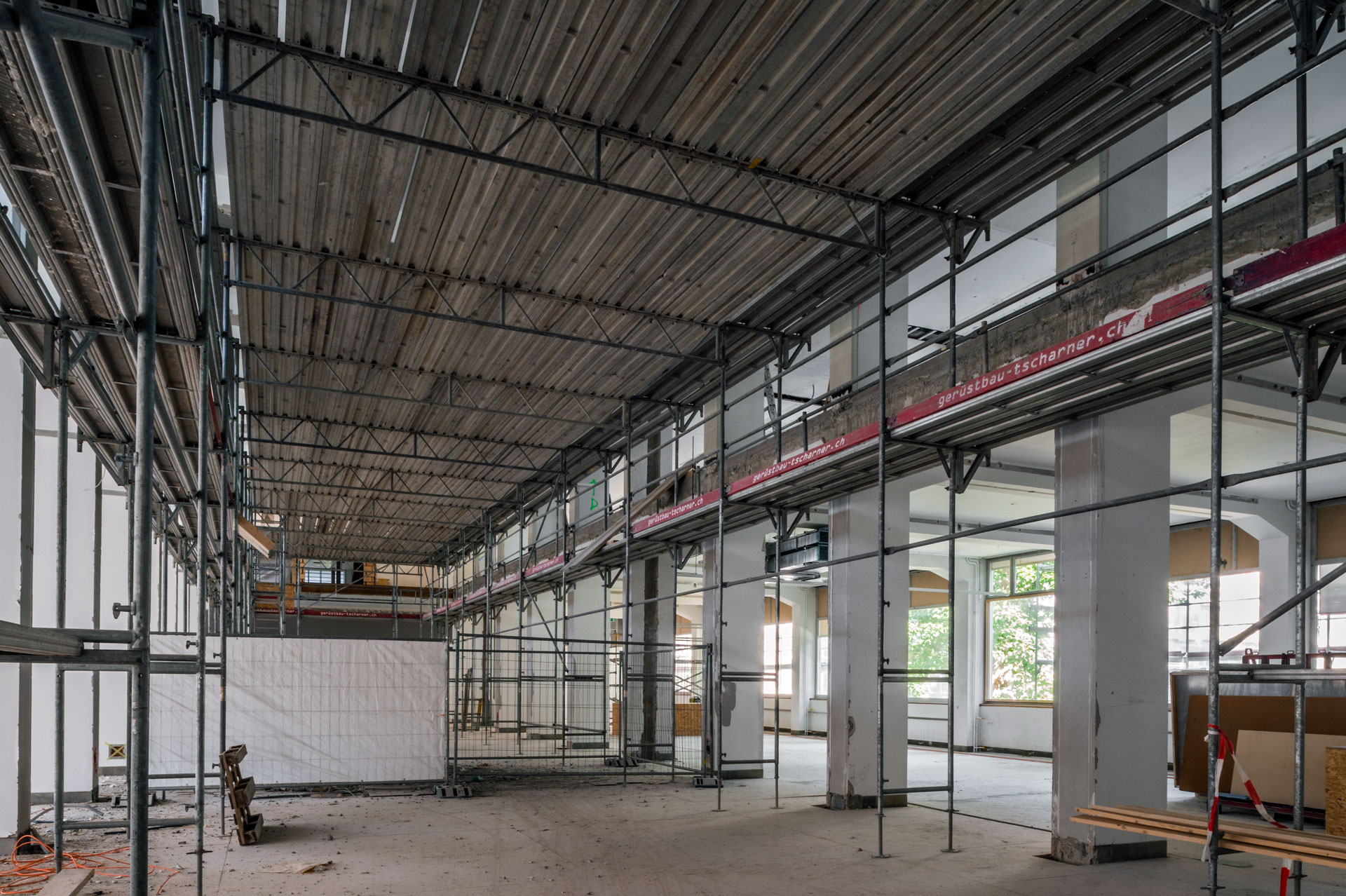 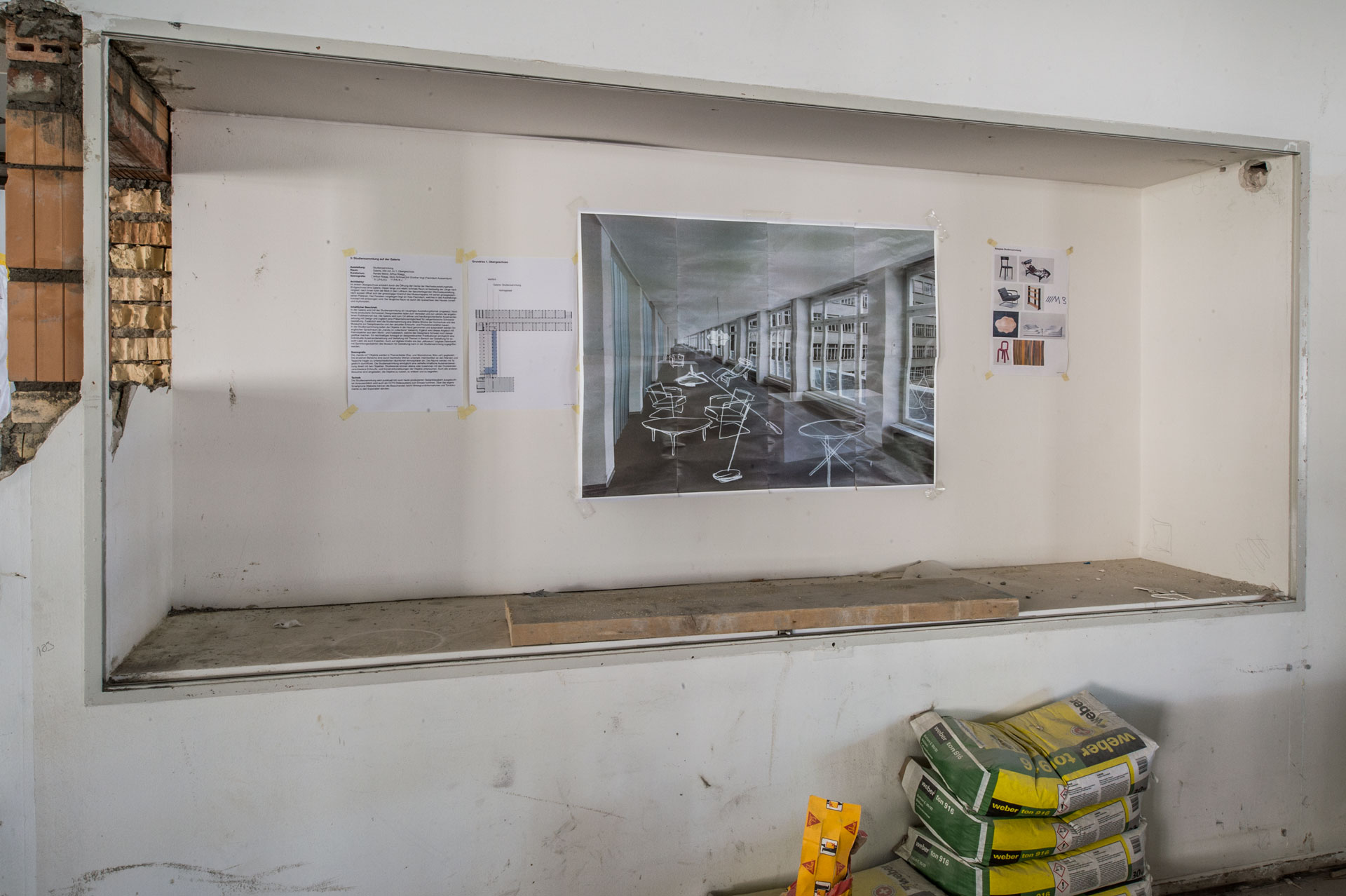 A vision for the gallery: Re-edited design classics offer visitors first-hand experience of design and architecture. 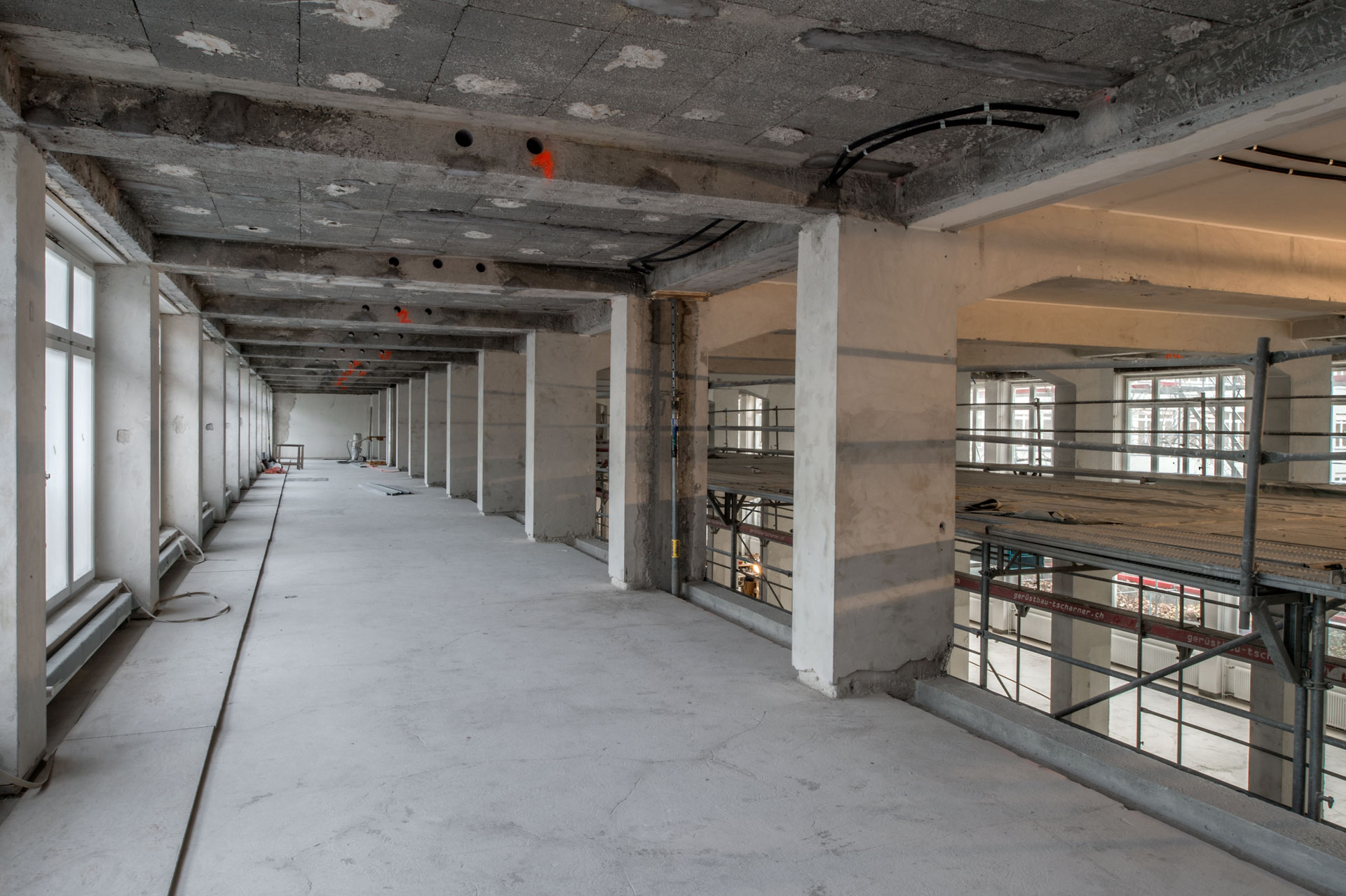 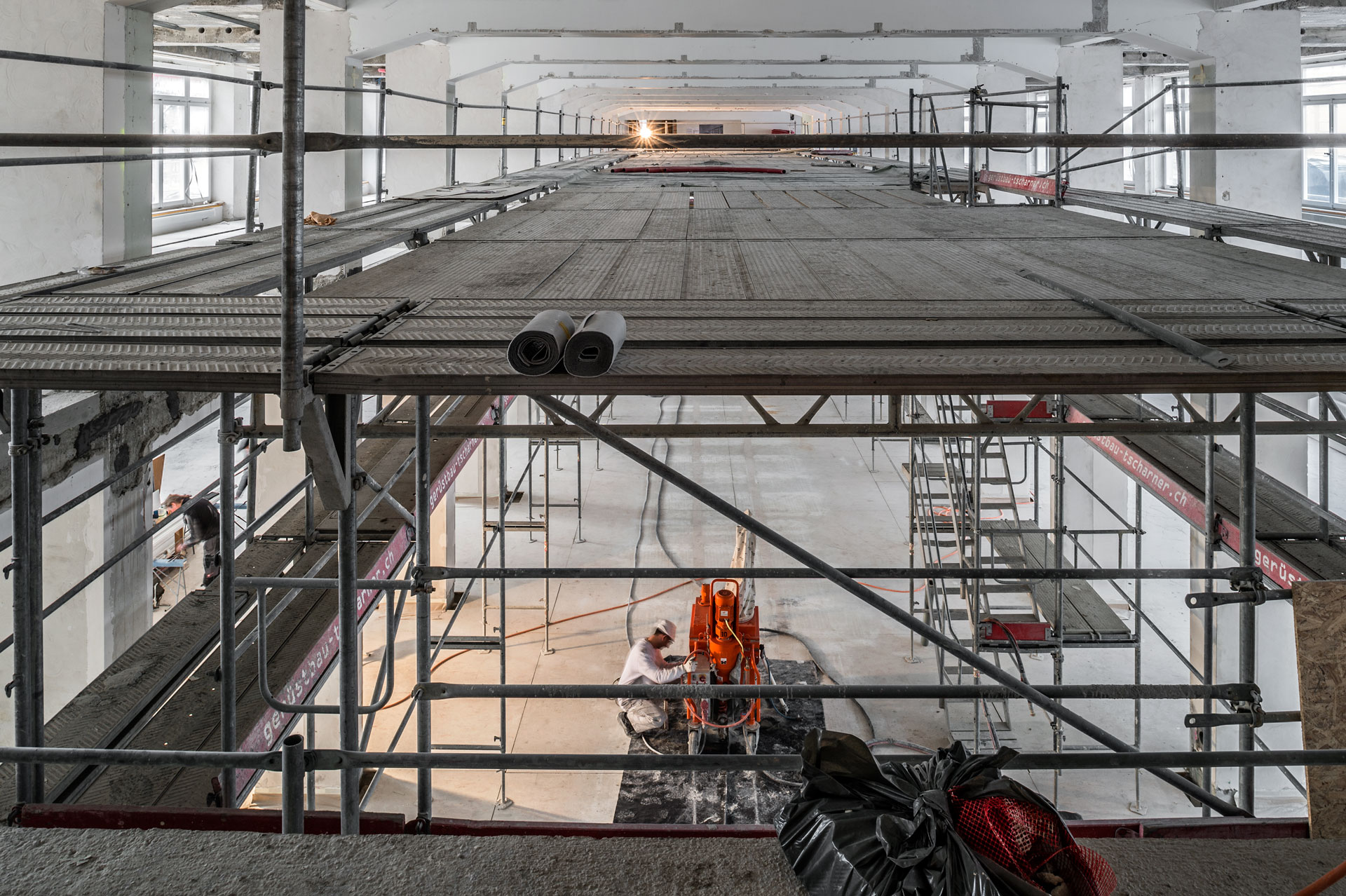 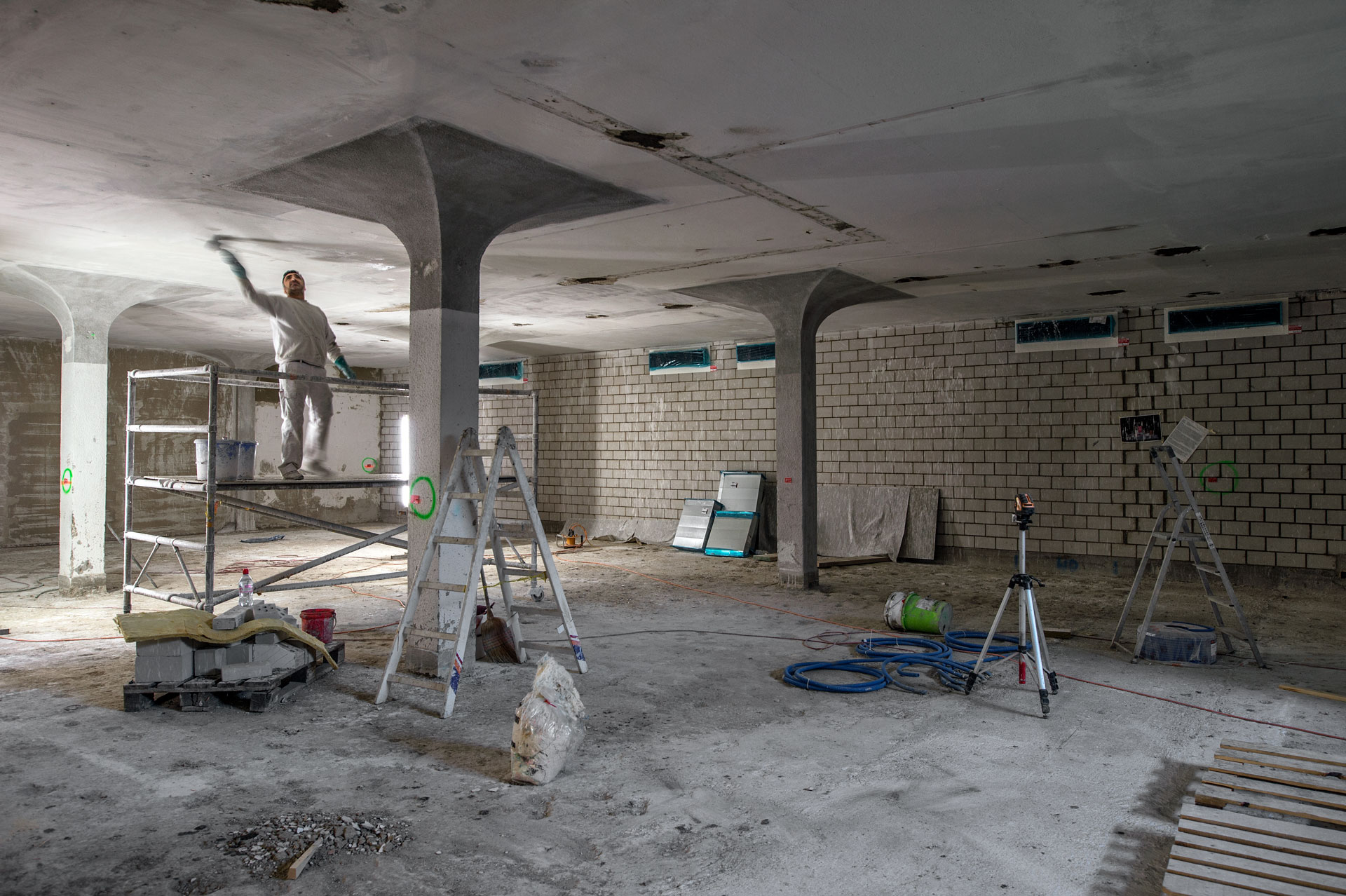 A home for design icons

Visiting the construction site of the Museum für Gestaltung Zürich

Zurich’s Ausstellungsstrasse 60 is bustling with activity. The historic building is currently under refurbishment. From 2018, travelling exhibitions and the various collections of the Museum für Gestaltung will be presented in the newly conceived exhibition spaces. A major role will be played by the building itself, an outstanding example of Neues Bauen (New Building) in Switzerland. Simone Rohner visited the site with museum director Christian Brändle.

When the Museum für Gestaltung Zürich relocated to the Toni Campus in September 2014, the historic museum site at Ausstellungsstrasse was closed for refurbishment. The face of the listed building, designed by architects Steger and Egender, has not changed noticeably — inside, though, conversion is still very much underway. The site smells of damp concrete and dust. The tiled floor has been covered with protective wooden boards, and the windows have been masked off with large sheets of plastic. Built in 1933, the building should suffer no damage during reconstruction. Over the years, it has endured many adjustments to its architecture and, surprisingly, it has survived these more or less unscathed. The most radical change forming part of the current conversion has already happened: the tri-axle exhibition hall, with its prominent pillars, has been opened up again above the nave and now has two tiers; the gallery space and the adjoining offices have disappeared. A ceiling was fitted in the 1960s due to a shortage of space. Whereas the school of art and design now had more office space, the building lost part of its architectural character. Only now, with the present conversion, can the generous, basilica-shaped exhibition hall be fully appreciated again. It is suffused with light even on this fog-shrouded day.

“The hall will be painted white, but we’ll be going back to the original 1930s colour scheme in some of the spaces and in the front axle.” Christian Brändle

“One day a good building becomes a nice ruin.” Christian Brändle, director of the Museum für Gestaltung Zürich, chuckles when he cites Adolf Loos, one of the pioneers of modern architecture. The key features of Neues Bauen are functionalism, an efficient use of materials, and a reduction to essentials down to the smallest detail. The museum building has no shortcomings, not even during this phase of the conversion. All architectural essentials are still in place. “And fortunately not a lot will be added,” says Brändle. The basic stance behind the conversion is restraint. But always with the question at the back of his mind what is necessary from a conservationist perspective for hosting exhibitions and what has fundamental importance for the building’s architecture. “The hall will be painted white, but we’ll be going back to the original 1930s colour scheme in some of the spaces and in the front axle. Occasionally, one needs to swallow hard because we’re no longer at all used to the colour palettes from those days.” For conservationist reasons, the hall-facing gallery will be glazed; curtains will allow regulating the daylight entering the space through the high windows.

Milestones of design history as a basis

Beside the large staircase in the entrance hall is a prominent passage, behind which lies the staircase leading down to the basement. Here, where the workshop team used to build the elaborate exhibition architecture and furniture up until relocation two years ago, two new exhibition spaces have been created. The front space, which Brändle calls the museum’s “crypt” dazzles the eye with four slim mushroom-shaped stilts, which go back to the engineer Robert Maillart, the pioneer of reinforced concrete bridge construction.

The museum on Ausstellungsstrasse will attract a broader, international audience eager to see the icons of Swiss design.

This space has literally been dying to present its beauty. Originally conceived as an exhibition space, it was very quickly turned into a store room and workshop together with the adjoining spaces; as time passed, Maillart’s stilts were forgotten. Here, the highlights of the design, graphics, poster, and arts and crafts collections will finally rise to their long-deserved prominence. “From 2018, we will be exhibiting cross-collection milestones of design history. In future, though, we also intend to place the building and its architecture at the centre of attention. Visitors will be able to experience it as an ‘exhibit’ in its own right.”

Immediately adjacent is another, lower space, which sports the same massive pillars as the great hall. It’s ideally suited to staging interiors from the design collection to greatest effect and to making these exhibits directly experienceable for visitors. On the first floor, the new gallery level, what was previously strictly forbidden will now receive programmatic status: Visitors can literally touch the re-editions of famous design icons.

One can hear the voices of the construction workers in the distance. Hammering echoes bluntly through the building. At the moment, 2018 is still far away. Part of the museum team is currently based at the Toni Campus while the exhibition department has its temporary offices near Ausstellungsstrasse. Yet again, the museum workshop is located in two places. “This is quite a challenge for everyone at the moment. Working conditions aren’t ideal. We’re all looking forward to working together as a united team,” Brändle points out emphatically. “Operating a museum located at two sites with different identities isn’t easy. This already proved true in the past, for instance, in the case of the Bellerive Museum.” But entrenched strategies and structures aren’t Brändle’s vision for the new museum. “What exactly the reconstruction means for the two sites and the exhibition programme remains to be seen.” There are plans to take greater risks with the Open Collections at the Toni Campus. The Ausstellungsstrasse site, with its few travelling exhibitions and new ways of presenting the collections will attract a broader, international audience eager to see the icons of Swiss design.”

To this day, the building is one of the best-preserved examples of Neues Bauen in Switzerland.

In March 2018, the newly converted Museum für Gestaltung Zürich will open with a show by Atelier Oï, a design agency based in La Neuveville, a small town between Biel and Neuchâtel. The show will stage the main exhibition hall, the building’s actual star. For Brändle, the hall is also a symbol: “It represents a cathedral of design.” Its tall pillars, the generously-sized windows fitted with hand-ground crystal panes lend the space greater significance while also placing it under an obligation.

From the industrial district to the cultural mile

In the 1930s, the building did not impress bourgeois Zurich and the local architectural association in the least. The building could not be distinguished from a dairy factory, one conservative critic proclaimed after the opening in 1933. It lacked the decorativeness befitting its status, nor did it feature a proper stairway leading up to the main entrance. “This kind of architecture was only possible at the time in Zurich because in the 1930s the building zone was located in the industrial district on the so-called filtering site.” To this day, the building is one of the best-preserved examples of Neues Bauen in Switzerland. “Our stance, to avoid any aloofness with future exhibitions, but instead to see eye to eye with visitors, draws an interesting parallel to the building’s architecture, which doesn’t contrast with the space outdoors, but actually includes it,” says Brändle. The museum will keep fostering dialogue and interaction with visitors within the exhibitions. “In future, the museum should offer visitors a platform and serve as a laboratory.”

Simone Rohner is a freelance journalist and a communications officer at the Museum für Gestaltung Zürich. She visited the Ausstellungsstrasse construction site in December 2016.
Teile diesen Beitrag: