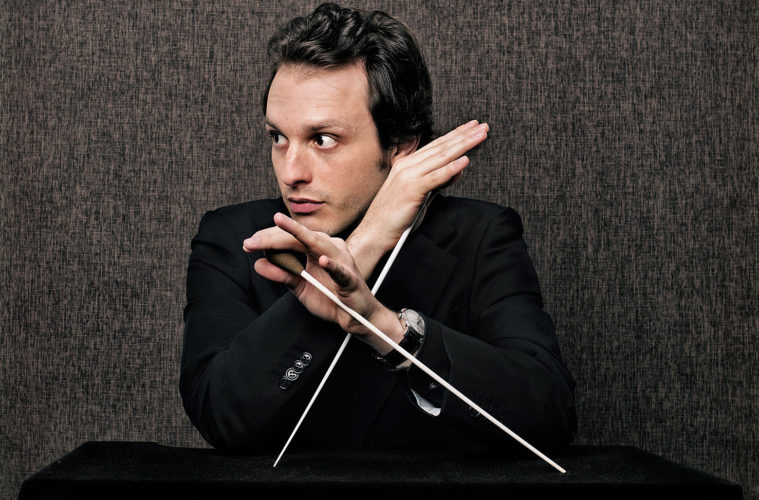 Communicating with and without a baton

From midnight concerts through conceiving music programmes to his own orchestra: 34-year-old French conductor Victor Aviat convinced the jury of the 2016 prix netzhdk with his richly faceted and innovative creative work.

He sings, paints, plays the piano, photographs, plays the oboe, and conducts. The arts were present from the outset in Victor Aviat’s life. Among them, music seemed the most obvious choice. He comes from a family of musicians and a lot of music was played at home: together with his brother, Aviat played sonatas and in the evenings the family would sit together to sing chorales from Bach’s organ booklet. These moments were formative and led to Aviat dedicating his professional life to music. He began studying the oboe and the piano at Winterthur Conservatory in 2001. Later he earned a Master’s in Music Performance, with a Specialism in Conducting, from Zurich University of the Arts.

Aviat deliberated long and hard over taking the step from the oboe to the conductor’s baton, from being a member of the orchestral crowd to the conductor’s stand, until two factors settled the matter. First, as an orchestral musician he grew increasingly frustrated because he felt that many conductors were not up to their job. Experiencing more and more occasions on which an orchestra would have played better without a conductor, he decided to take up conducting himself: “I want to do things better!” His high expectations of a conductor were also associated with his personal experience as a musician: “I was very fortunate to work with so many exceptional conductors that I became increasingly picky.” On the other hand, like many artists he had an inspirer, one of the greatest in his case: Claudio Abbado.

“I was very fortunate to work with so many exceptional conductors that I became increasingly picky.”

In the Orchestra Mozart and the Lucerne Festival Orchestra, Aviat played under the maestro and learned so much about conducting. Finally, when the turning point in his career came, one of his fellow musicians helped him: “I didn’t know how to make further progress with the oboe, but felt a deep longing to have a greater impact within the orchestra than merely contributing my own voice.” In the end, it was this desire for innovation, and to make things happen on stage, that elevated him from the pit to the stand.

One foot in Zurich…

It was pretty obvious for Aviat to study conducting at Zurich University of the Arts: He had already studied in Winterthur, had a position at Zurich Opera, and had founded his own orchestra, the Orchestra Zurich, in town. He knew, and thought highly of, Johannes Schlaefli, professor of conducting at ZHdK, from studying the oboe. And he liked the wide range of opportunities available at ZHdK. The ZHdK conducting programme offered students the unique opportunity to conduct professional Swiss orchestras like the Musikkollegium Winterthur and to gain experience abroad, for instance, in Bulgaria and the Czech Republic.

…and the other already elsewhere

The 34-year-old is feeling the attraction of foreign shores. With the beginning of the 2016/2017 season, Aviat has been appointed “Young Conductor in Association” at Bournemouth Symphony Orchestra. The appointment will enable him not only to extend his conducting skills through working with a professional orchestra but also to be responsible for educational and community concerts. This field is especially dear to Aviat. He has already experimented with various forms of presenting concerts and pursuing music education with the Orchestra Zurich. When the subject comes up, he is brimming with innovative ideas: getting the audience to sit among the musicians, allowing it to ask questions during public interviews with performers, or letting the audience choose from three encores at the end of regular concerts. These ideas don’t require extra staffing or greater artistic effort, but have the great benefit in Aviat’s eyes of involving the audience directly in music in manifold ways.

Although interaction is today’s mantra, it is curiously absent from many classical concert venues. Aviat’s approach to music education rests on the assumption that musicians have a certain remit, one which reaches beyond performance, their actual métier: “Artists should help school the audience. The role of the musician is to bring listeners closer to music as an art and as a form of culture, not only as mere entertainment.” Music, he adds, he is not simply beautiful, but also meaningful. Moreover, it has a subtext, with which musicians and the audience should engage. Be it philosophically, historically, or analytically.

“The role of the musician is to bring listeners closer to music as an art and as a form of culture, not only as mere entertainment.”

At the same time, Aviat is eager to demystify the world of classical music and to bring it much closer to audiences. Conductors, he observes, turn their backs on the audience for almost the entire duration of a concert. This explains Victor Aviat’s motto: “To communciate with people, not to turn one’s back on them, and then bolt!”

netzhdk is the alumni organisation of Zurich University of the Arts; it is a network of former students, faculty members, and staff of ZHdK and its predecessor institutions. The prix netzhdk is awarded once a year. Worth 10,000 Swiss francs, the talent award is conferred on students graduating from ZHdK Bachelor’s and Master’s programmes. Nominees must furnish evidence of three to five years’ practical experience and that they have achieved distinction within their field through independent and exceptional work.
www.netzhdk.ch
Rebekka Meyer is an assistant dramaturg at Junge Oper Stuttgart as well as a freelance music journalist and music educator.
Teile diesen Beitrag: