“When I’m singing, I hear a beat inside me” 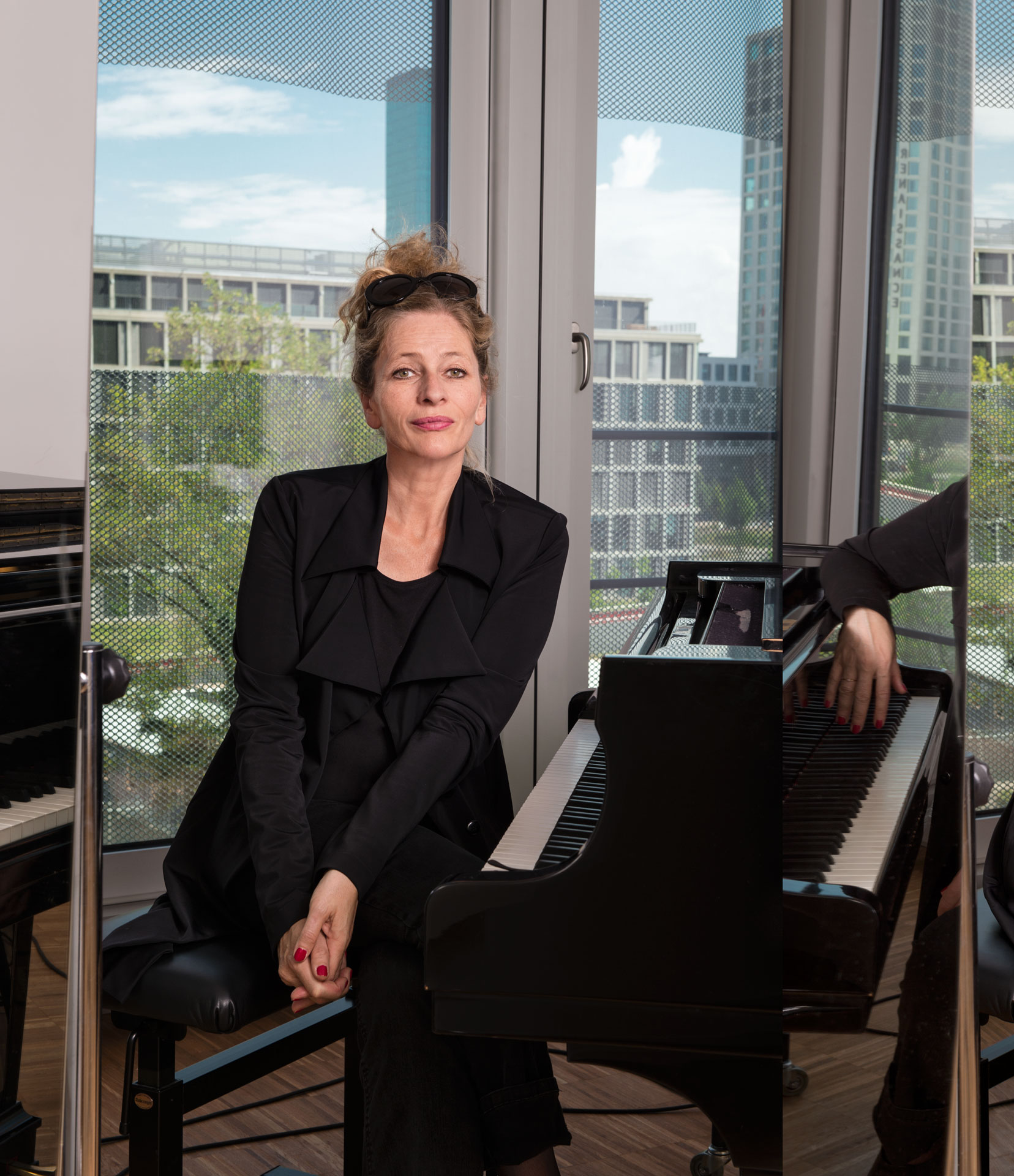 The relationship with one’s body and rhythm is fundamental for a singer. Rahel Hadorn, lecturer in pop and jazz, interrupts her students whenever they are not dancing inwardly to their singing. Her classes not only hone technical skills but also work on achieving naturalness.

She’s wearing light sandals. “Of course I’ve come on foot,” she says when we meet on a late summer’s day at Café Hubertus. Rahel Hadorn is not just a singer, but a dedicated walker. Whenever she can, she walks. When ZHdK’s Jazz and Pop faculty convenes for its annual meeting on local Mount Üetliberg, she doesn’t take the train — but scales the slopes on foot, straight from her apartment near Goldbrunnenplatz.

Walking is key to the 49-year-old’s philosophy of life. “There’s something marvellously subversive about walking,” she explains. “I’m not supporting anyone — neither a fitness centre nor private enterprise.” Ultimately, Rahel Hadorn won’t let herself be taken in and isn’t easily unsettled.

Her career as an artist reflects her philosophy of life. After graduating from Swiss Jazz School in Bern, her quartet “Acoustic Stories” and its album “Live at Moods” (1997) was the talk of the day. Tages-Anzeiger music critic Johannes Anders described her as the “promising new star of the Swiss vocal jazz scene.” True, her career remained relatively quiet after that — which, she says, was because she was a single mother. And because she didn’t want to get too unsettled. Not even by her own career prospects. “My basic groove needs to be quiet.”

Rahel Hadorn won’t let herself be taken in and isn’t easily unsettled.

And there’s something else. “I really love teaching,” she says. Over her long teaching career — now spanning two decades at ZHdK and its precursor institutions — she has supervised dozens of future jazz and pop singers. And even if she doesn’t want to impose anything on her students, she has her own artistic credo. Already with “Acoustic Stories” she had interpreted jewels from the Great American Songbook. She has recently spun this thread further in her latest recordings with Zurich pianist Mario Scarton: we hear evergreens like the time-honoured “Honeysuckle Rose,” which the sweet-tempered New York stride pianist Fats Walker rendered homage to in 1928, giving audiences such amazing pleasure. And precisely that cheers Rahel Hadorn: “The old songs are so upbeat! I used to dance the Charleston, which fits these songs perfectly.”

“Honeysuckle Rose”: even before the piano introduction, one hears Hadorn’s fingers flicking. “One… two… one, two, three, four…” There’s a sense of swing in the air, anticipating the rhythm. And soon Hadorn will intone the grand old song, light-footed, perhaps with the cheerfulness of the former Charleston dancer. “When I’m singing, a whole drum kit beats along inside me,” she says. Besides, “I hear it immediately if a singer isn’t dancing along inside, when there’s no groove inside.” She recalls a student with whom she sang in class, but spent even more time dancing with. “This young singer had no relationship whatsoever with her body and rhythm. Some students need to discover themselves a lot better before busying themselves with singing technique.”

Hadorn’s new recordings are those of an utterly unconceited, unpretentious, untwisted — in short, natural — artist. And yet there’s plenty of technique: her warm, full-bodied contralto ascends from the depth of her body, only to rise seconds later, modulatingly, like Ella Fitzgerald (in “Makin’ Whoopee,” performed in 1954 with pianist Ellis Larkins). And if one listens to Hadorn’s interpretation of “The Nearness of You,” the Hoagy-Carmichael classic of 1938, whose nuances she traces through artistic intimacy — one realises that she is conversant with the entire vocal art of the Great American Songbook, of artists like Sarah Vaughan or Nancy Wilson, Dianne Reeves or Dee Dee Bridgewater. She has a lot of technique.

Switching between technique and naturalness plays a major role in Hadorn’s teaching. About technique: “If you want to develop a ‘time feel’ like the great soul singer Aretha Franklin, you’ve got to practise and keep practising!” About naturalness: “Music, ultimately, should never sound rehearsed. It’s about feeling.” Here again, Aretha Franklin points the way: “She could stand there and sing — and people were in raptures! She could do it more or less hands down!”

All of Rahel Hadorn’s attributes and persuasions — deriving joy from the pleasurable and from the rhythm of music, her skepticism toward too much technique — blend in a single word: song. “The song is the most beautiful thing of all,” she maintains. “A song means a message, a feeling, a groove. I don’t like artificiality. And it shouldn’t take place up there.’” She points to her head.

“I work with what resounds from within my students. Actually, I spend five years listening to them, until they leave again.”

Which almost brings us full circle, back to Rahel Hadorn, the pedestrian and walker. Strolling, she also frees herself from what strives for control “up there” — to gain a freedom that, as she says, only benefits her teaching: “Walking is like meditation. When I’m walking, I empty out in a good way: that allows me to approach my students open-mindedly. I don’t arrive for classes armed with teaching materials. I work with what resounds from within my students. Actually, I spend five years listening to them, until they leave again.”

Prof. Dr. Christoph Merki (christoph.merki@zhdk.ch) teaches on the Jazz & Pop Profile and is a music theory lecturer at Zurich University of the Arts. He has been writing about music and many other subjects for three decades.
Teile diesen Beitrag: