How worlds come into existence 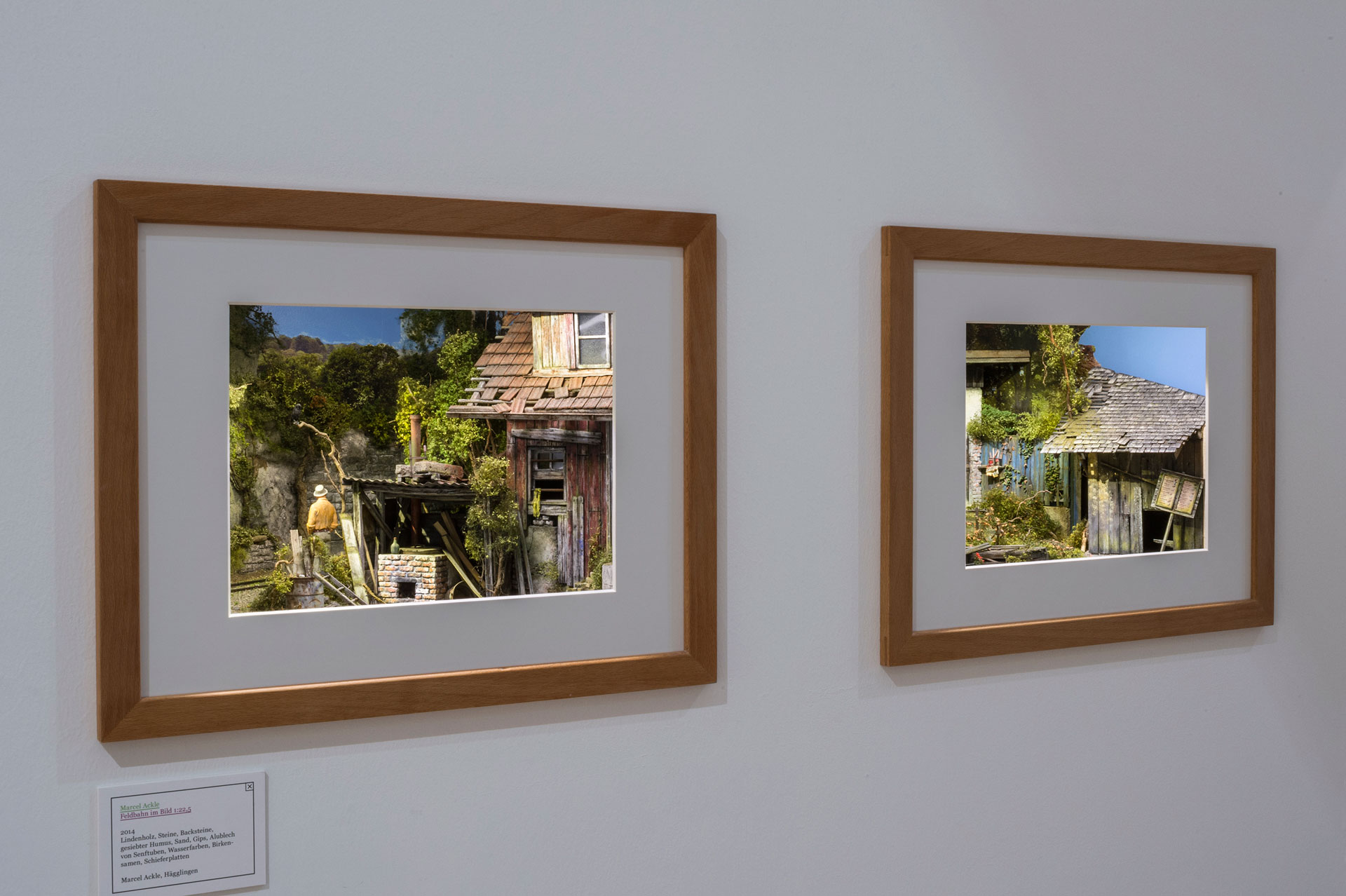 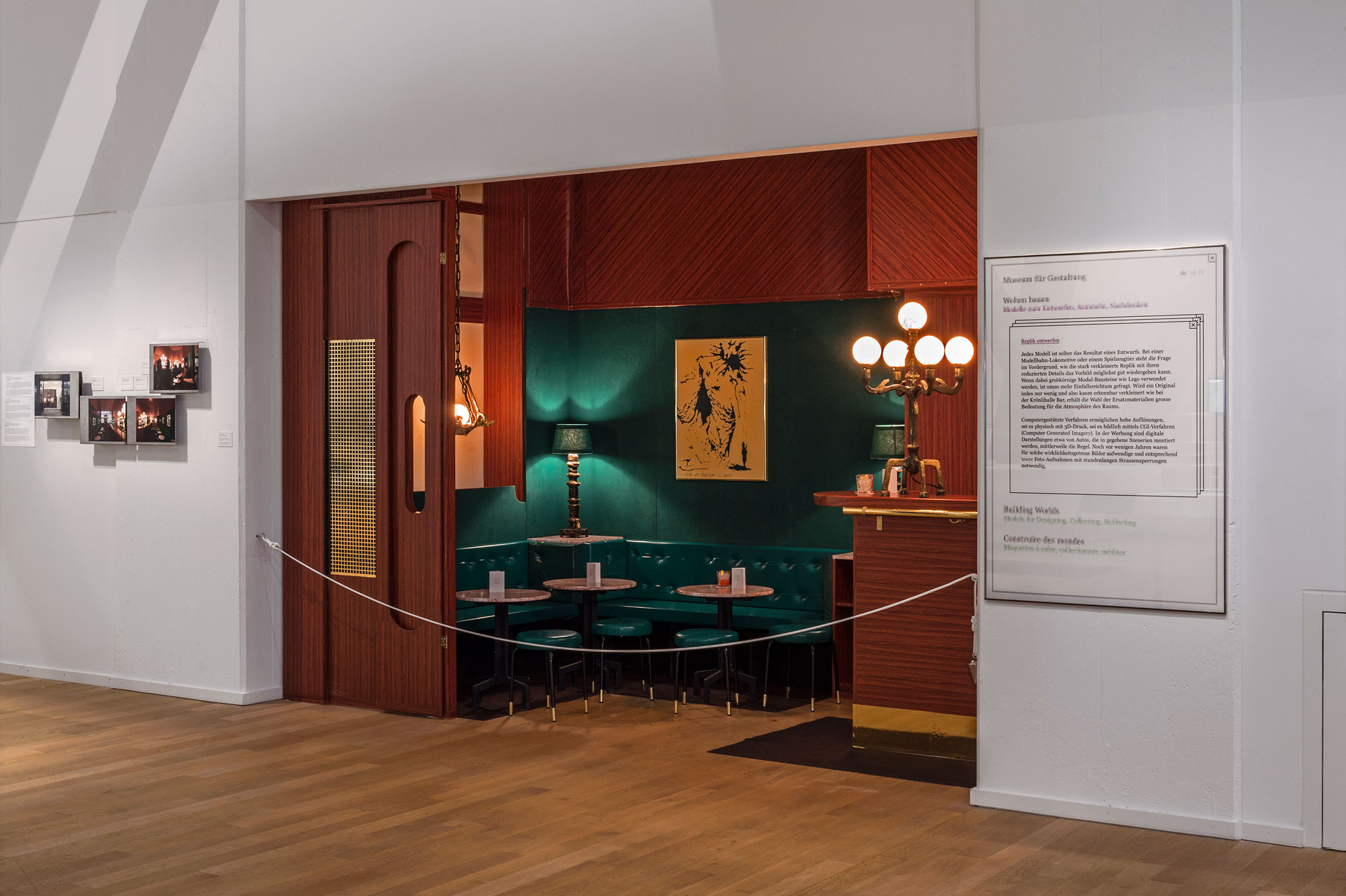 How worlds come into existence

Nostalgic and virtual model worlds at the Design Museum

“Model”: the word conjures up expectations of smallscale railway carriages, miniature worlds, and architectural models made of cardboard and plywood. “Building Worlds — Models for Designing, Collecting, Reflecting,” a new exhibition at Zurich’s Museum für Gestaltung, reveals that models hold in store a much broader range of themes and invites visitors to marvel at and indulge in playfulness.

Noble surfaces, subdued light, art hanging on the walls. The stylish atmosphere invites visitors to linger — one feels like sitting down and ordering a drink. And yet there’s an irritation. The interior seems astonishingly smooth, the space just a bit too small. What visitors encounter as they enter the new exhibition at Zurich’s Design Museum is the city’s famous Kronenhalle Bar scaled down to 85 percent. Created by the Zurich-based artist collective that shares its name, this is the “Krönlihalle Bar.” Like its great role model, the lavish interior brings to life a glamorous ambiance — even though the green saffiano leather, the mahogony wood, and the bronze table legs have been replaced with golden, marble, and wooden foil, just as the works by Miró, Matisse, and Picasso have made way for simple copies. Imitation and déja-vu instead of a unique stylish extravaganza. What is the effect of reduction? Do visitors shrink analogously to the modellike situation? Or do they surpass themselves? Either way, the “Krönlihalle Bar” creates a special atmosphere, a world of “in a sense.”

“Simulation is an essential aspect of many models,”says Andres Janser, the exhibition curator. Just as the visualisation of Zaha Hadid’s office complex in Sharjah Desert Park also plays with as-ifs: sand, sunlight, and streamlined architecture — everything looks deceptively real. Computer-based processes, so-called Computer-Generated Imagery (CGI), turn the virtual tour of the luxury facility almost into a one to one experience.

The fascination of miniatur or the world stands still

Model maker Marcel Ackle’s dioramas also look deceptively real. His showcases present richly detailed, small-scale scenes: wafer-thin slate slabs, miniature bricks, and natural materials exposed to the elements have been reduced to scale; the light and background blend harmoniously and create the near-perfect illusion of reality. What makes such miniature worlds so fascinating? “The miniature is where we find greatness,” remarked Gaston Bachelard as early as 1957 in The Poetics of Space. Immersing ourselves into the reality of the small format briefly opens up the nostalgic world of our childhood, of the sheer indulgence in play, when time appears to stand still, when space seems easy to grasp and invites imaginative exploration.

Models strive to be imagined and often evoke the viewer’s desire for tangible experience. Among the exhibits is Schloss Neuschwanstein, reproduced in cardboard on a scale of 1:5000. Beholding the miniature castle induces a veritable Gulliver experience: in-depth scrutiny would need a magnifying glass or at least the ability to pick up the small object to contemplate it close-up. Highprecision model builders like Thomas Grüninger work with purchased cut-outs consisting of several thousand pieces and what professionals call “detailing,” the art of adding faithfully accurate, handmade details — notabene in the range of 0.1 millimetres. Greetings from Liliput!

Lying on the threshold between the two exhibition rooms like an exclamation mark is the “Inflatable Wind Tunnel” by Kaspar König and Florian Dombois, two model-making or rather scaling specialists and artistic researchers at Zurich University of the Arts. But why a wind tunnel? Many models begin their lives in a wind tunnel. At least all aircraft, railway, and automobile models whose aerodynamic properties need to be tested for speed, forces, and wind loads. But so, too, are entire city models measured. The declared aim is to conduct a reality check based on a similarity relation: the scaled-down models are gauged with real data and their validity verified on a full-scale object. What this looks like in practice is demonstrated by the series of models developed for the SBB high-speed train Giruno, which will be thundering through the newly opened second Gotthard tunnel from the end of 2019. Along with the wind tunnel test models, the package includes formal and presentation models as well as a one to one mockup: all are made from diverse materials, depending on their function and their particular stage within the concept-to-execution process.

The power of models

Whereas wind tunnel models test the (possible) worst case, Aydın Büyüktaş’ “Flatland,” a photo-realistic series of images, presents impossible model worlds. These multidimensional views of streets, squares, and buildings in the city of Istanbul, in which the frontal view seamlessly transitions into a bird’s eye view break our viewing habits. The image manipulations generate powerful physical suction, almost tempting us to plunge into the deep urban canyons.

Thus models aren’t harmless! Far from it, since their potential encompasses more than representation (models “for”) and exemplary character (models “of”). This, too, emerges from wandering through the exhibition, which spans the fields of design, architecture, leisure culture, art, film, and science. Models are perilous: when the toy models built by an interior designer in the German crime series “Polizeiruf 110” later prove to be the tools of his evil, they are frightening; when they accompany the protagonist’s madness in Stanley Kubrick’s “Shining,” they are witnesses; when they are used to reconstruct a crime, as at the War Crimes Tribunal in The Hague, where a model of the crime scene was created to help reconstruct the assassination of the former Lebanese Prime Minister Rafik Hariri, they provide insights into events otherwise incomprehensible. Their unrestrained powerfulness means that they actively shape worlds. And precisely therein lies their fascination.