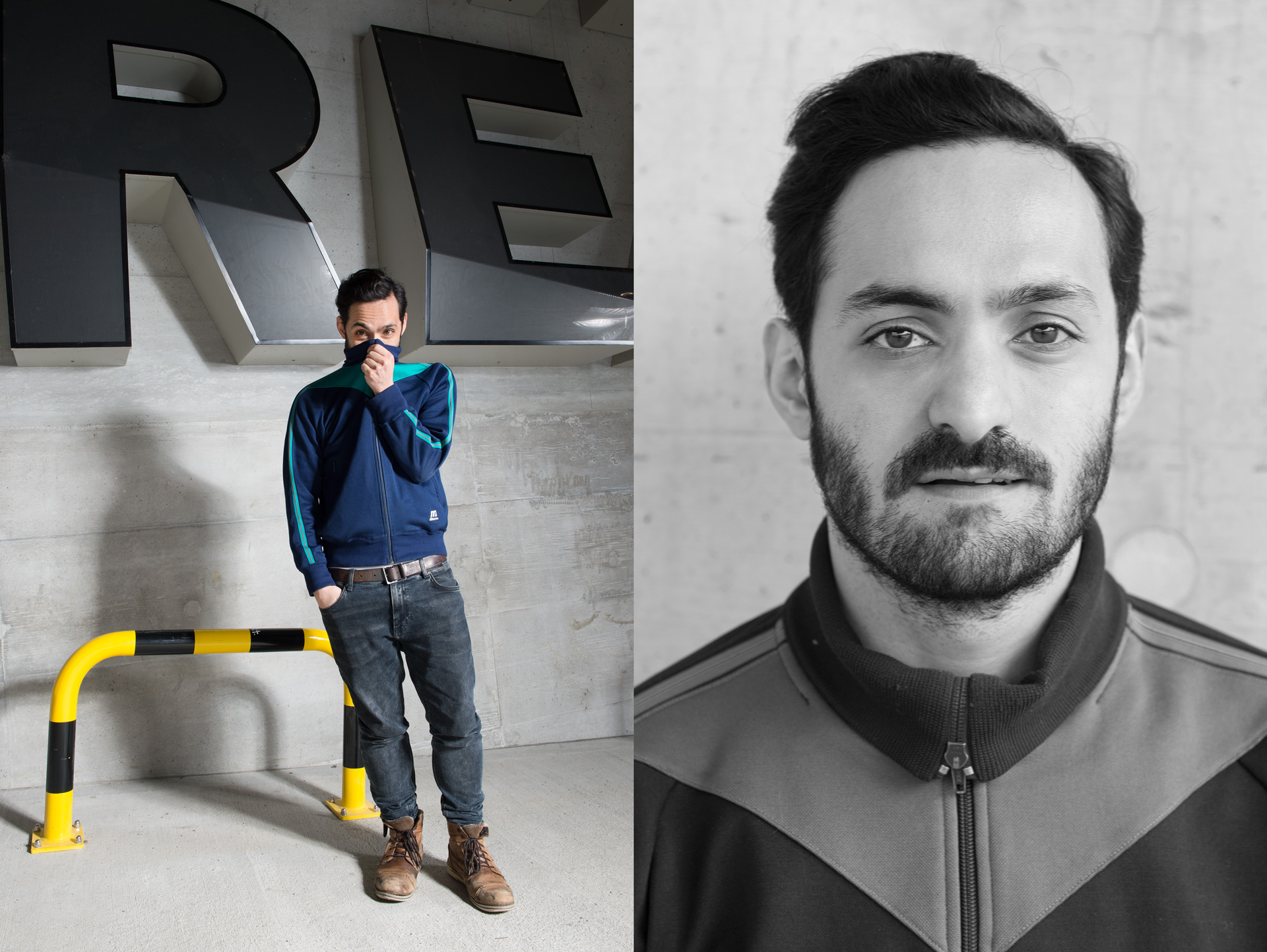 He’s still a student, but has already starredin “Homeland,” one of today’s most successful television series: Alireza Bayram moves between international filmsets, European theatre stages, and Zurich’s Toni Campus. A conversation about working under globalised conditions and dealing with uncertainty.

Isabelle Vloemans: You’ve just returned from London. What were you doing there?
Alireza Bayram: I was visiting some of my family.

You also travel a lot professionally — where have you been recently?
I was involved in several film productions in Berlin and then in Hamburg for a leading part in “Tatort.” (Thinks) I was in Leipzig for the “SOKO” crime series, then in Munich for a production of the University of Television and Film. I’ve been involved in several stage productions, especially in Basel and Zurich, and abroad for guest performances.

You’ve been making a living from acting for a number of years, without going to acting school — how did things get started?
My twin sister introduced me to the youth drama club at HMT [Editor: The School of Music and Theatre HMT is one of ZHdK’s precursor institutions]. In 2007, I got my first parts at the reputed Junges Theater Basel. That got things rolling. My first film was a ZHdK graduate film, since when I’ve appeared in roughly a dozen ZHdK graduate films, including the Oscar-nominated “Parvaneh.”

“Because everything had to happen quickly, I shot a video here at ZHdK and sent it to Berlin to audition for the part.”

You’ve been studying film at ZHdK since autumn 2014. At the same time your career has really taken off. How did you get the part in “Homeland”?
That was in August. I was attending a seminar on film lighting when I got an e-mail from my agency in Berlin. They had received an enquiry from a local casting agency. One needs to know that season 5 of “Homeland,” which I was involved in, is set in Berlin. Initially, an American actor was earmarked for the role, but that wouldn’t have been authentic, as my character had to speak perfect German. So a Swiss got the part (bursts into laughter). Because everything had to happen quickly, I shot a video here at ZHdK and sent it to Berlin to audition for the part.

What happened next?
I got the okay two days later and shooting began a few days after that.

That’s incredibly short notice. Your role was tremendously important, wasn’t it?
Yes, it’s amazing just how few preliminaries go into making “Homeland.” The producers had looked at my material before the casting, so I was already shortlisted when I arrived. Generally, they’re prepared to take risks. So the series is always at the cutting edge and able to take up current affairs. The last episode of season 5 was broadcast on 20 December 2015, a mere three weeks after we finished shooting. Only the enormous manpower available to the producers of such a top-class series makes that possible. There are no fewer than ten scriptwriters, two assigned to each episode. When we began shooting, only four of the twelve scripts had been written. Each episode has a run-time of 50 to 60 minutes. As actors we got the scripts every ten days during the shoot. Changes were made on the day of the shoot. There was a lot of speculation among the cast about how the various storylines would develop. It was quite amazing how the scriptwriters, who were on the set, took up suggestions from the cast. For instance, an entire scene was cut when I pointed out that it would have made my character far less interesting.

“It was quite amazing how the scriptwriters, who were on the set, took up suggestions from the cast.”

How did you prepare for the role of the Jihadist Qasim?
Initially, I knew almost nothing about my character. When I got the script for the first episode, I couldn’t find Qasim. When I asked whether I had received the wrong script, then said, “Don’t worry, we’ll get you in there.” At that stage it wasn’t at all evident that Qasim would play a key role. Preparation-wise, I couldn’t do a lot more than watch documentaries about Salafists in Berlin. I wanted to understand their motives and researched the relevant background and the issues involved.

“‘Homeland’ is a top-class series that allows ambiguity and ambivalences. This reassured me that Qasim wouldn’t be serving any stereotypes.”

What was it like to play a Jihadist? “Homeland” has been criticised for reproducing cultural stereotypes.
I don’t think this criticism is justified. The series also contains much American self-criticism about the war against terror. To begin with, I knew little about my character, but I knew that ‘Homeland’ is a top-class series that allows ambiguity and ambivalences. This reassured me that Qasim wouldn’t be serving any stereotypes. As the story unfolds, he’s tormented with ever increasing doubts. I explained his actions by telling myself that he wants to do good but becomes so caught up in ideologies that he no longer finds a way out.

“I think it’s great that the BA in Film at ZHdK provides a solid foundation and offers insights into all areas of filmmaking, i.e., script, directing, photography, editing, production.”

You’ve been studying film at ZHdK since autumn 2014. What’s your career goal?
Well, I’d like to work as a director one day. Directing has always interested me. I think it’s great that the BA in Film here at ZHdK provides a solid foundation and offers insights into all areas of filmmaking, i.e., script, directing, photography, editing, production. Understanding all aspects of filmmaking is invaluable for a director. Also, the infrastructure at ZHdK is extremely good. We’re learning the craft and technique of filmmaking from scratch, but what you do with the skills is up to you. The many different aspects of the programme have also helped me progress as an actor.

You seem pretty much booked out — how do you reconcile your acting career and your studies?
Fortunately, my course director Bernhard Lehner is very obliging. For instance, I was only able to tell him a few days before semester started that I wouldn’t be in Zurich. Featuring in “Homeland” has been accredited as a placement. In return, I’ve shared my experiences on set with my fellow students during classes.

Isn’t it strange to be a student, going in and out of campus, after working with stars like Claire Danes?
No, not at all. I was delighted to get back to Zurich. My course matters very much to me. Featuring in “Homeland” hasn’t made me vain.

So you’re down to earth, like a good Swiss?
No, I’m realistic.

What will you do if you’re swamped with fantastic offers?
I’ll deal with things as they come. I can’t prepare for what might happen. All I can do is to remain fully committed in the here and now.

Alireza Bayram was born in Teheran in 1984 and emigrated to Switzerland with his parents and three sisters. The actor lives in Zurich, where he is studying film at Zurich University of the Arts.
Isabelle Vloemans was a project manager at ZHdK University Communications.
Teile diesen Beitrag: