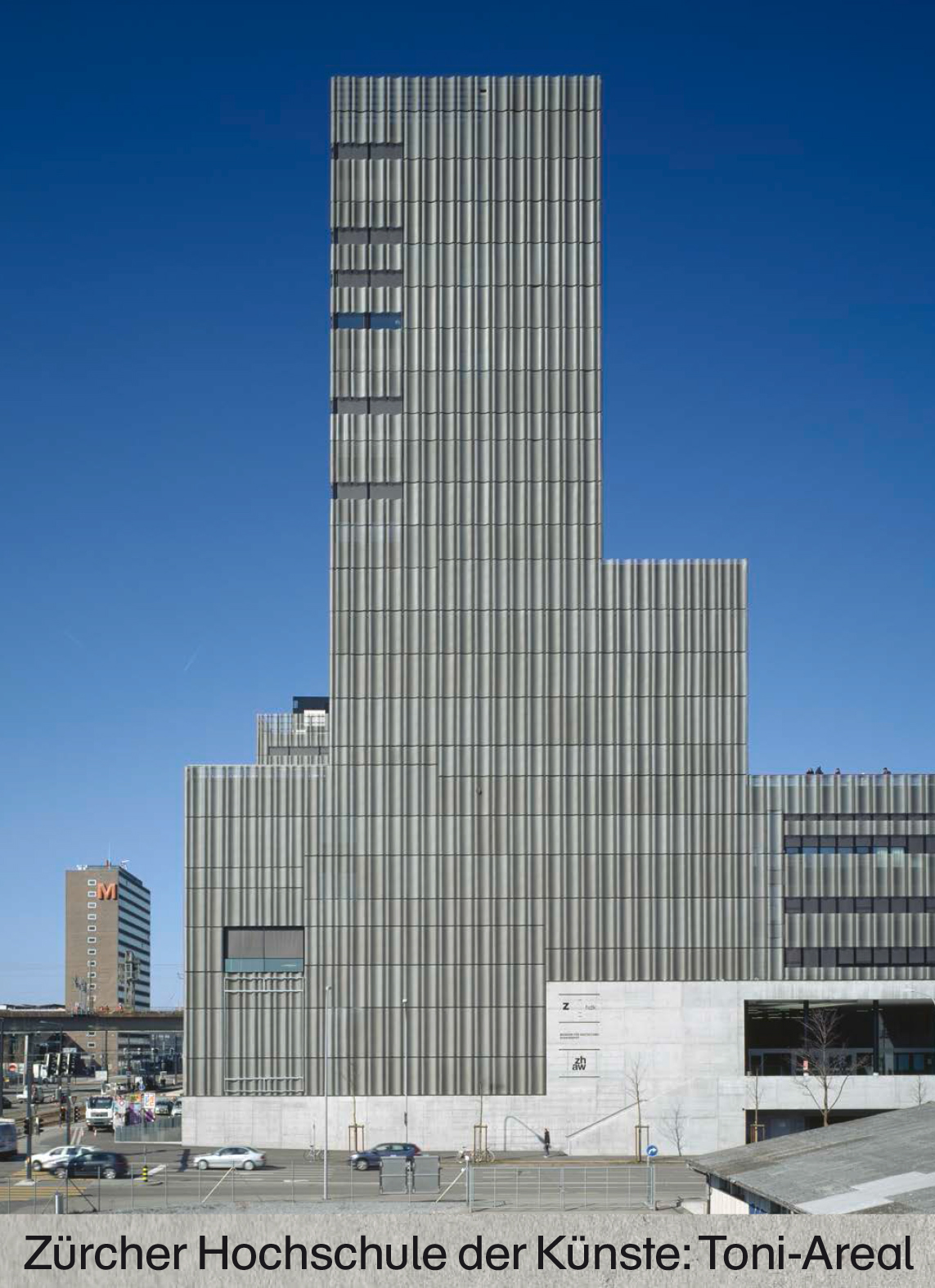 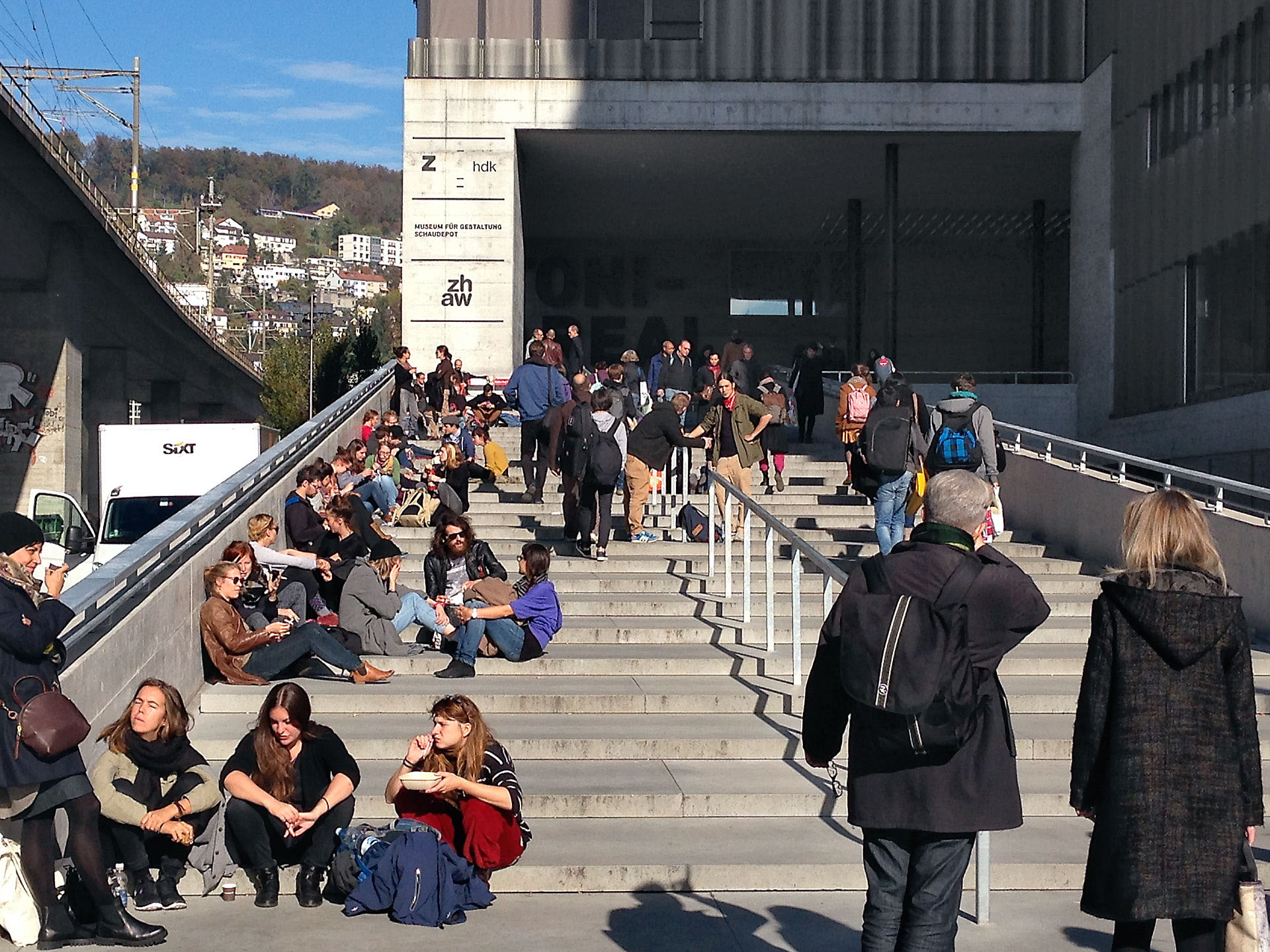 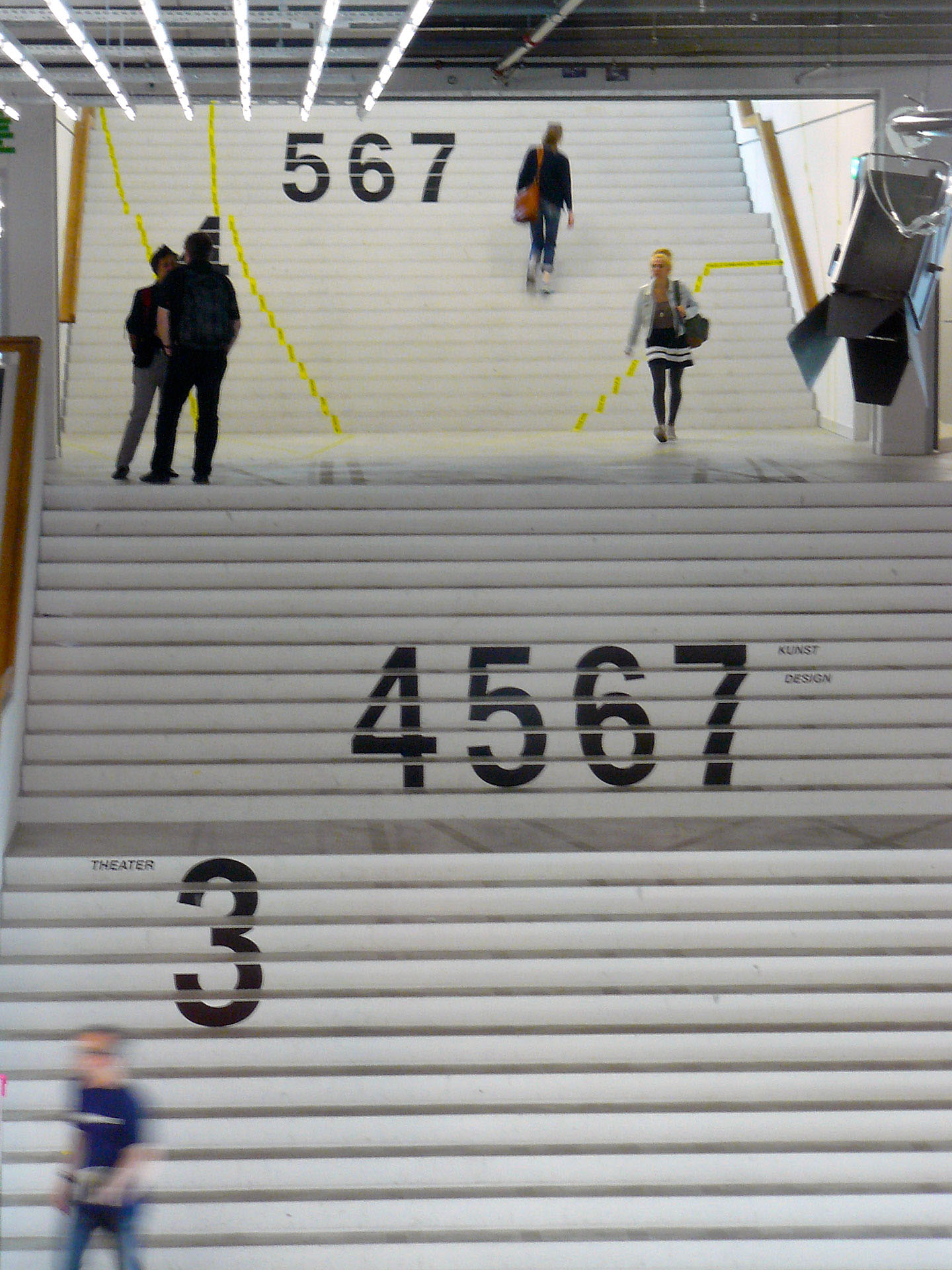 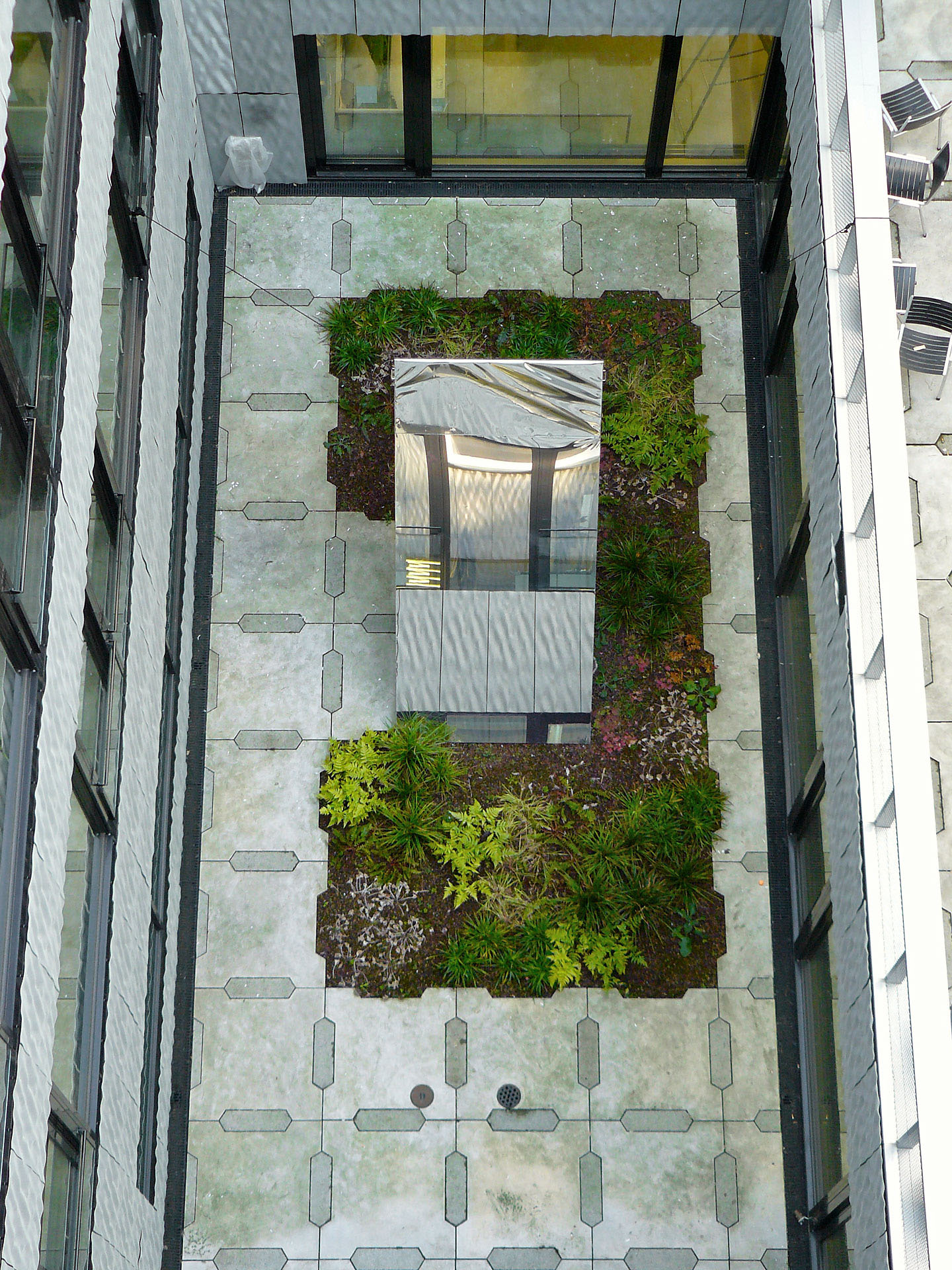 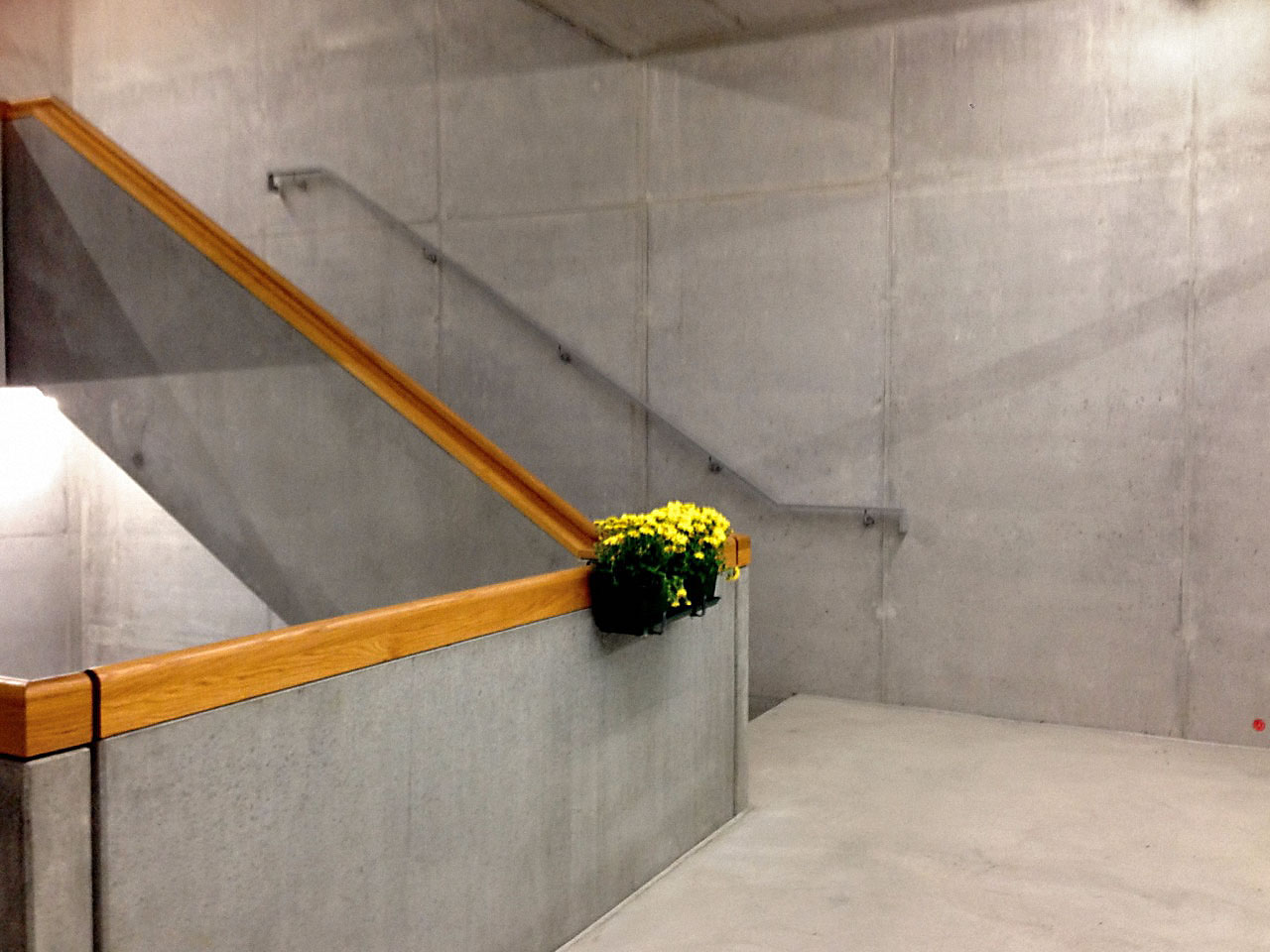 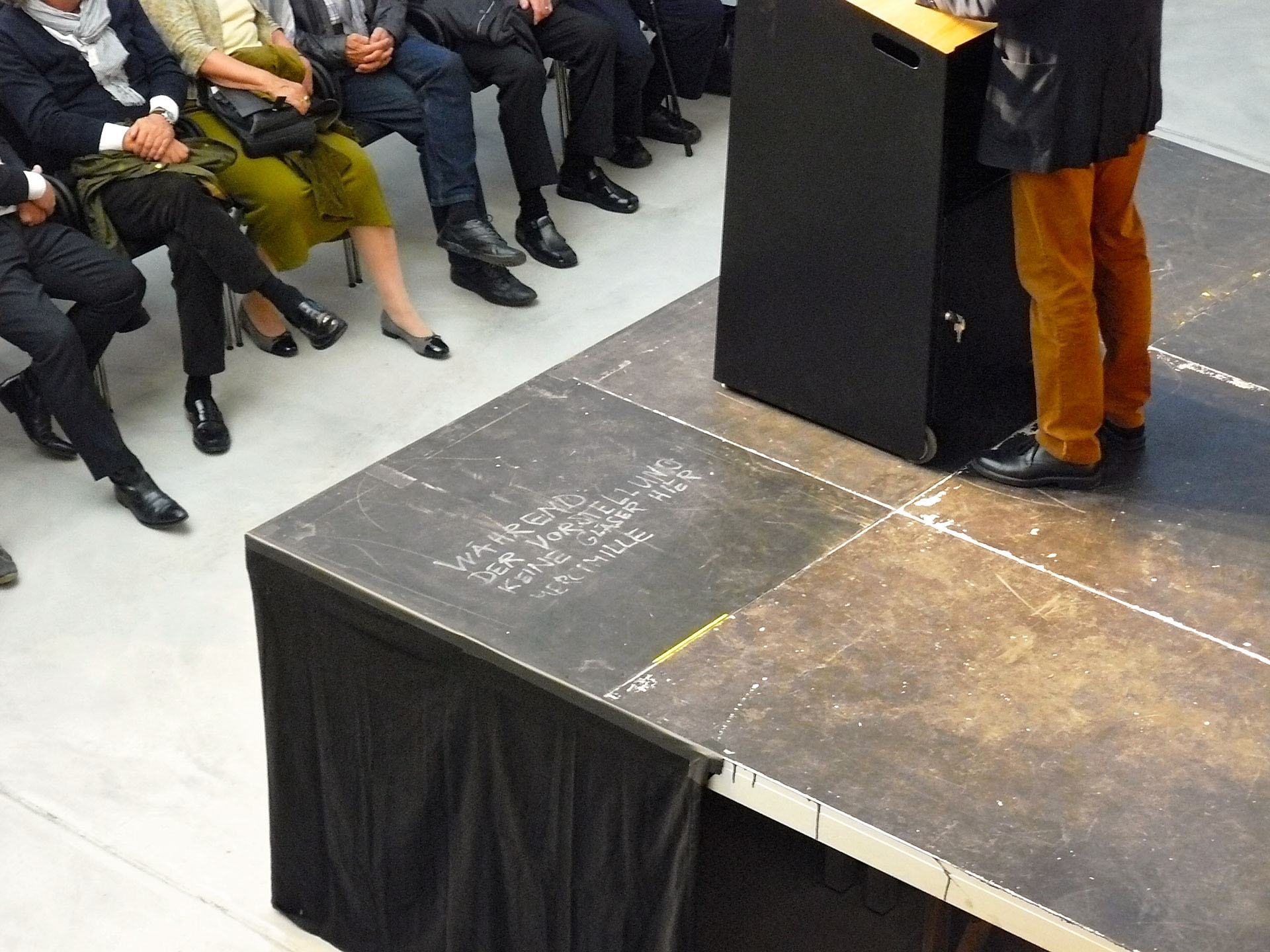 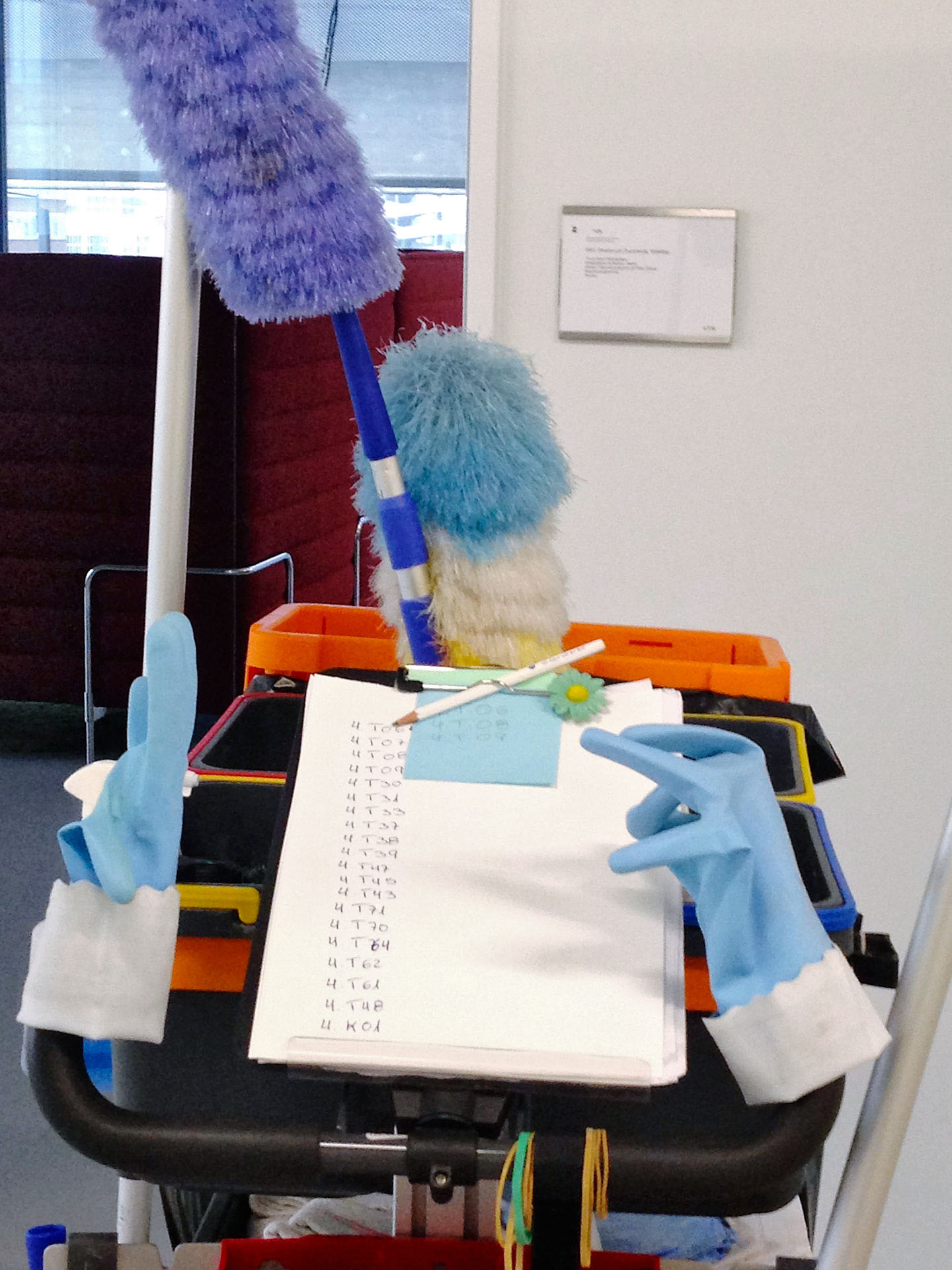 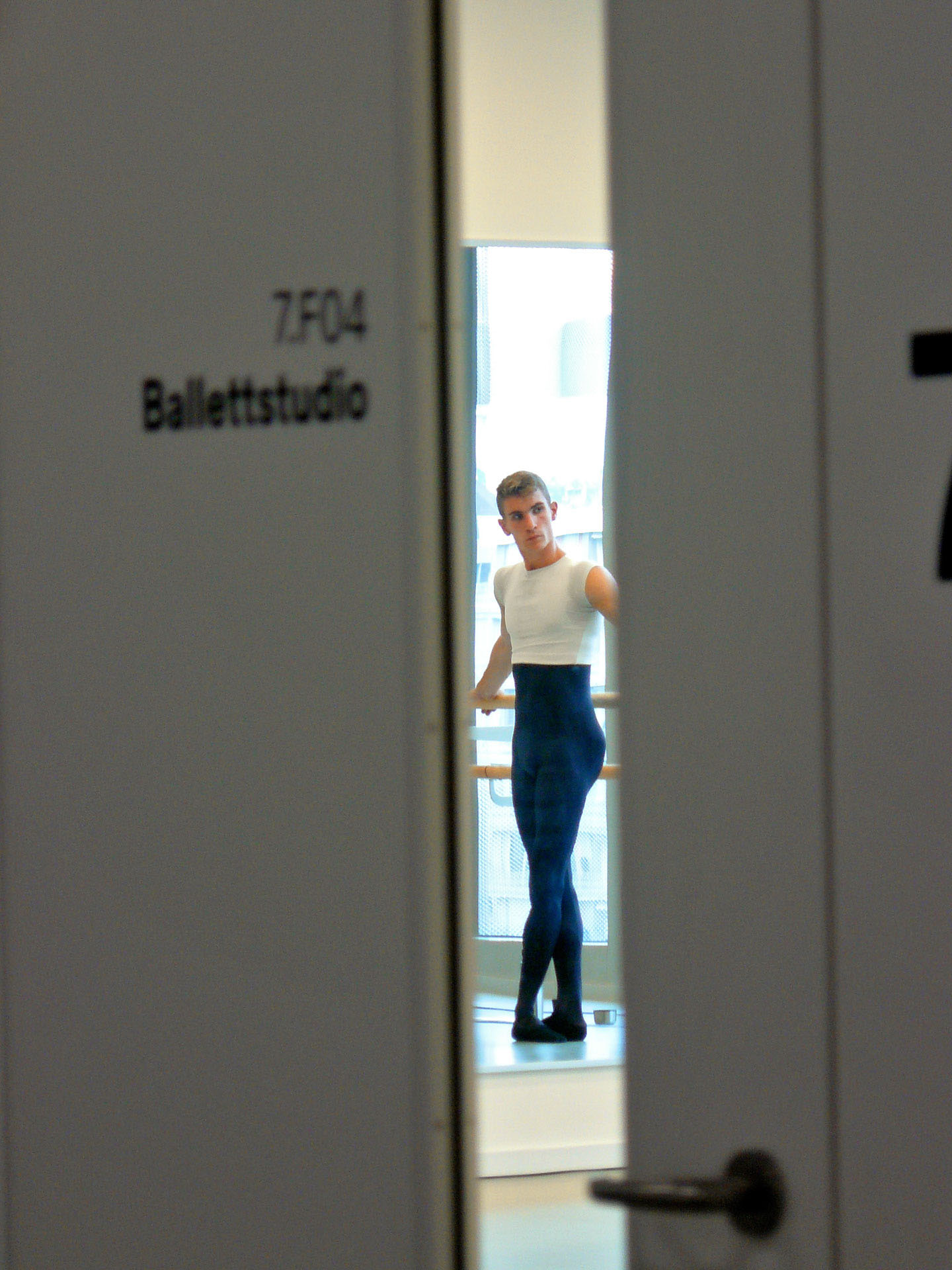 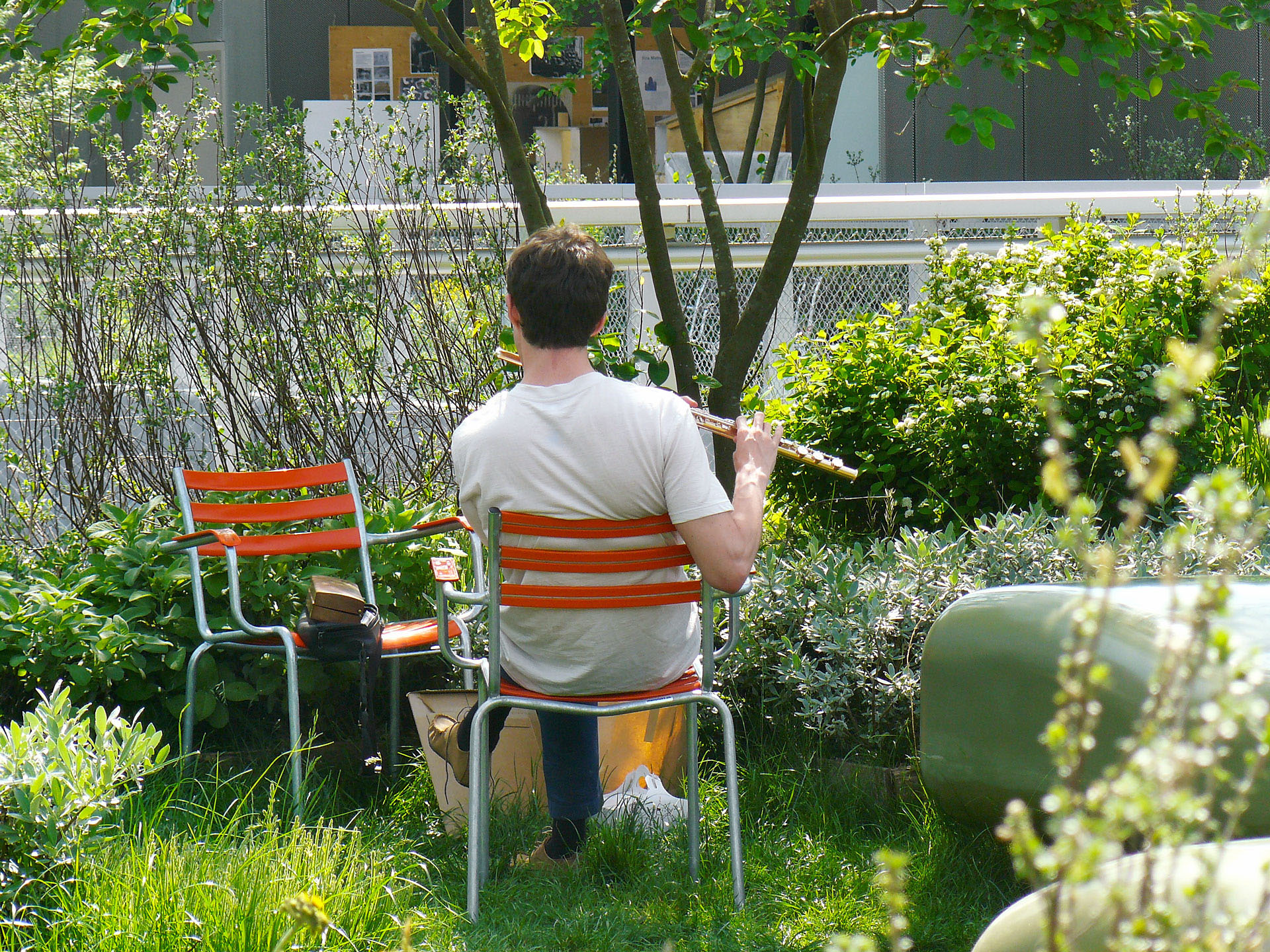 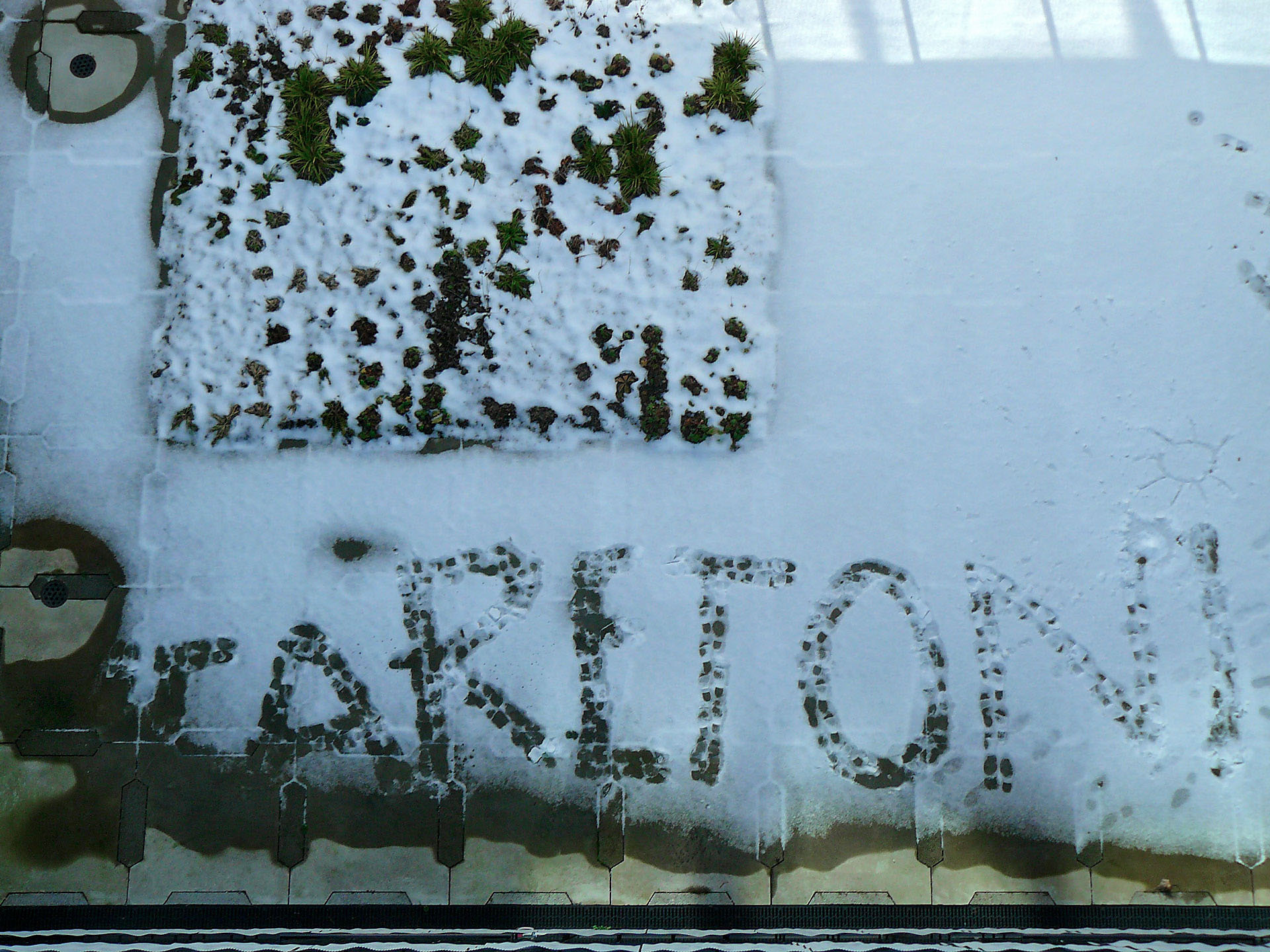 How has ZHdK settled into the Toni Campus since relocating there in 2014? Commissioned by the university board, Zurich University of the Arts: Toni Campus documents day-to-day life on campus and how users have appropriated the new building. Cultural Publishing lecturer Janine Schiller tells interviewers TANJA BREU and SELMA WICK how she researched the book and prepared its publication.

BY TANJA BREU AND SELMA WICK
___

Tanja Breu and Selma Wick: You have studied the history of Zurich University of the Arts and the Toni Campus in-depth. What made Katharina Nill, your co-author, and you document the process of moving into the Toni Campus?
Janine Schiller: In 2013, the university board commissioned me to do a book on the Toni Campus. Zurich University of the Arts: Toni Campus isn’t primarily about writing history, but instead captures one moment in time. From an institutional perspective, two years are not long, but the beginnings in a new building always matter. At first, everything is new, magnificent, and exciting — but daily events soon put things into perspective. It’s not as if ZHdK has become larger with the relocation — it has simply become more compact and more visible in the cityspace.

What is the intention of the book?
Something the building’s architects Daniel Niggli and Mathias Müller mentioned in passing stirred my curiosity: “Only what can be appropriated is also loved. We envisage a building with robust, simply designed spaces, which don’t mind being manhandled by their users.” It was this highly interesting architectural statement, summoning users to inscribe themselves in the building, to leave their marks, that Katharina and I wanted to explore. To document the appropriation process, we chose an ethnographic, social research approach. We focused on daily campus life and were interested in users’ perspectives on the architecture. We didn’t primarily aim to present the various disciplines and structures, but looked for those activities that shape everyday campus life: studying, doing research, teaching, learning, working, rehearsing, eating, exhibiting, performing, producing. We also explored the industrial past of the former dairy factory and its neighbourhood, in order to contextualise the building and its history from different angles.

In a talk you gave at ZHdK you said words to the effect that whoever engages with an institution’s history is under the general suspicion of representing a justificatory, comprehensive perspective. Have you managed to adopt another vantage point?
Doing a commissioned book about ZHdK in its new home called for an overall view on the whole institution. But given the nature of the challenge, one can actually only fail. The first important conceptual decision we took was not to publish a book on the occasion of the building’s opening. Such a publication would have only focused on the visions and hopes for the new site, but not on its everyday life. So we developed a three-part concept instead: for ZHdK’s relocation to the Toni Campus in September 2014 we devised a special issue for Hochparterre, the architectural, urban planning, and design journal; we concentrated on the site’s architectural aspects and the new use to which Europe’s once largest and most modern dairy factory was being put. This enabled us to reach a professional audience and to create public interest in the forthcoming relocation. For the first year and a half, we ran a blog to document and gather reflections on the relocation.

What was the significance of the blog?
It was a sort of public “research diary.” Its purpose was to discover and negotiate issues arising in connection with the relocation; moreover, we collected and produced visual material from various different angles. We involved Berlin-based author Kathrin Passig as a neutral observer, to provide an outsider’s views via the blog and a designated Twitter channel. We also discussed the new surroundings with students in various courses. These findings and insights were then edited for the book.

One of your goals was to address individual perspectives on the building and to discuss how the organisation dealt with the new beginning. What is the role of architecture in this respect?
Architecture is always an influence. We placed great emphasis on establishing a differentiated perspective on the differences between architecture and organisation. “Architecture isn’t omnipotent, it’s an offer,” remarks EM2N architect Mathias Müller in an interview published in the book. How we accommodate ourselves within the new shell is crucial. So the phrase, “Function melts form,” applies very much to the Toni Campus. Its industrial structure and architectural concept permit us to reorganise almost everything. If our needs change, or if the architecture restricts us, we can adjust it to our new needs.

How has your view on the Toni Campus changed in the two years since the relocation?
I’m still deeply occupied with the building and with our approach to it as an organisation. I’m also observing the hugely influential changes in the urban surroundings here in Zurich West. The institution’s preoccupation with the Toni Campus is far from over; the concentration into one site remains important for ZHdK and its development. We’re still in the midst of the appropriation phase; from this perspective it’s good that the building will keep challenging us for a while.

“Zurich University of the Arts: Toni Campus” How did Europe’s most modern dairy factory evolve into an arts university? How do architecture and appropriation, structure and shell, organisational culture, educational policy, and urban development interact? This volume reveals how architects EM2N converted the former Toni dairy in Zurich’s old industrial district into a site purpose-built for education, culture, and housing. Numerous photographs and images illustrate everyday campus life at the new home of Zurich University of the Arts, now united under one roof. Edited by Janine Schiller and Katharina Nill on behalf of ZHdK. Zurich: Scheidegger & Spiess, 2016. Designed by Jalscha Römer, Laia Ortiz Sansano, Romy Strasser, and Dario Mutter.
Tanja Breu and Selma Wick are students on the Master of Arts in Art Education specialising in Curatorial Studies at Zurich University of the Arts.
Janine Schiller (janine.schiller@zhdk.ch ) is a cultural studies scholar and architectural historian. She teaches on the Specialisation in Cultural Publishing at the Master of Arts in Art Education at Zurich University of the Arts.
Teile diesen Beitrag: