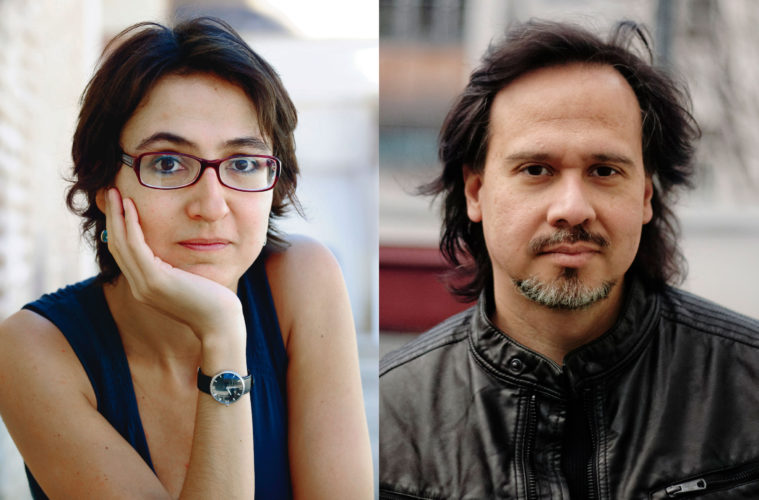 Elena Mendoza and Jorge Sánchez-Chiong about contemporary music and culture

Elena Mendoza and Jorge Sánchez-Chiong about contemporary music and culture

In 2016, Elena Mendoza and Jorge Sánchez-Chiong were guest composers at ZHdK’s Studio for Contemporary Music, where they worked independently. However different their musical works, both composers move, indeed commute, between cultural worlds. In an interview with Jörn Peter Hiekel, they explain why artists need a broad, open concept of culture and what migration means for one’s path as an artist.
___

In May, Spanish composer Elena Mendoza (born in Seville in 1973) and Venezulean composer Jorge Sánchez-Chiong (born in Caracas in 1969) were guests at ZHdK’s Studio for Contemporary Music. Stylistically, their approaches to composition are remarkably different. Thus, Mendoza, who has lived in Berlin for a long time, writes largely classical compositions. By contrast, Sánchez-Chiong works in the area between multimedia art and improvisational music. He is of Cuban-Chinese descent and has been based in Vienna for many years. Common to both artists, however, is the moving between diverse cultural worlds, a fact of life deeply rooted in their biographical experiences — as well as their highly creative approach to dealing with artistic experiences made outside Central Europe.

Jörn Peter Hiekel: You are both composers who move between different cultural worlds. How far does this influence your compositions and could you give examples from your work and that of others where this commuting is apparent?
Elena Mendoza: Indeed, my music emerges from living between different worlds. I grew up in Southern Spain, whose aesthetic sensibility has influenced me. When I moved to Germany, the paradigms there forced me to question my “native” sensibility and made me aware of my origins. And yet my background also allows me to maintain a critical distance to German aesthetics and not to consider this perspective self-evident. I believe that this back and forth between and across cultures makes it at all possible for me to find my own path as an artist. There are countless examples of composition between cultures. One of my favourite composers is György Ligeti, whose life and career demonstrate that the clash between the Hungarian tradition of music and the German avantgarde brought forth a unique composer.
Jorge Sánchez-Chiong: Ideally, working as an artist in modern-day culture involves active engagement with its many fields and events. Important elements of my work emerge from an intense preoccupation with aesthetic discourses in other fields of art or music. This requires me to pursue a largely open concept of culture or rather to keep redefining existing concepts. In the mid to late 90s, I embarked on an intense cooperation with Vienna’s improvisional and electronic music scene, until I became part of that scene myself. I had to leave behind an array of production and communication techniques, attitudes and expectations, that I had developed during my training. This transition was intensified further by my preoccupation with performance and video art, noise music and club culture, which brought me into fruitful contact with innovative contemporary and progressive approaches.

Are there still differences between your home culture and the culture of your choice with regard to new music?
Jorge Sánchez-Chiong: If I didn’t see myself as a Viennese-by-choice, I’d say that I’m living in cultural asylum: unfortunately, there is little space or understanding in my native Venezuela for the kind of music that I want to make. In the first ten years after coming to Europe when I was eighteen, I returned to Caracas at least once a year to give talks, workshops, and concerts. Since the left-wing revolutionary party has seized power, I have been back only twice, for about five weeks within the last seventeen years. For me as a leftist Latin American, the disastrous failure of Hugo Chávez’s Bolivian revolution is a tragedy. Without the freedom of thought or political debate, there is no hope for culture to flourish in keeping with our (progressive) times.
Elena Mendoza: Absolutely. Aesthetic perception is cultural. I keep experiencing that my music is received very differently in Germany, Spain, Austria, France, or Switzerland

With which expectations do you attend presentations of your work at arts universities or music schools?
Elena Mendoza: I love exchange and let myself be surprised by its outcomes!
Jorge Sánchez-Chiong: Well, expectations are justifiably high — I had one of my most wonderful, most interesting teaching experiences at ZHdK, when I took over Germán Toro-Pérez’s group of electroacoustic composition majors last year.

Prof. Dr. Jörn Peter Hiekel (joern_peter.hiekel@zhdk.ch) is a musicologist and musician and lectures on the history of music at Zurich University of the Arts.
The Studio for Contemporary Music is among those divisions at ZHdK offering most public events. One key feature of its richly faceted programme, which reaches out to all sections of the general public interested in music, are regular events portraying influential composers from across the world, whose music is presented in concerts, workshops, and open discussions. These formats offer students a vital opportunity to have intensive contact with contemporary music — and the audience the equally attractive and important experience that engaging with music can amount to considerably more than sheer devotion to familiar idioms.