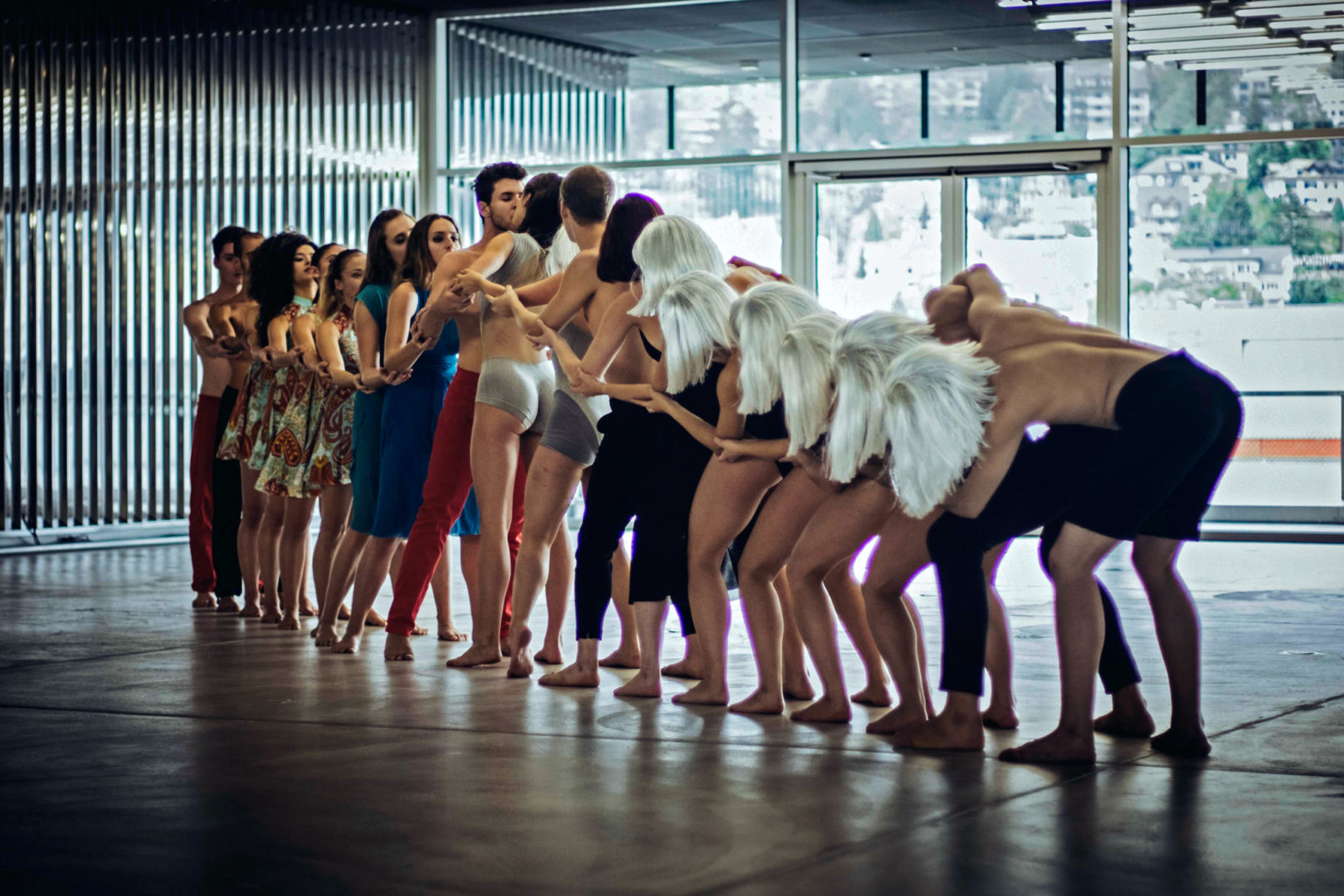 Students from the Bachelor in Contemporary Dance during the shooting. Photographies: Maya Wipf

Judith Hunger: What is «New World» about?
Laura Kaehr: It’s a short sci-fi dance film about Anna, who breaks free from an oppressive society set in a dystopian future. Rebelling against her peers and family, she journeys into the unknown. Exploring a world she didn’t know existed, she meets the otherwordly Marc. Anna is intrigued. It’s love at first sight. As they dance and express their love, their relatives try to separate them. Unable to reconcile everyone with their love, Anna and Marc decide to leave. Where will they go? What will they find?

What does the title refer to?
Looking for a theme that would engage young adults, my colleague Andreas Birkle and I chose a story that challenges boundaries. How important is group affiliation? Should we question the society we live in? Films like «The Hunger Games» or «Fahrenheit 451» inspired us: They were hugely successful with young people because they speak of courage, hope, and creating a better future.

Which were the biggest challenges during the shoot?
The weather conditions were unpredictable so we learned to think on our feet. The students were very organized and committed. Although we worked with 40 students aged 18–30, the setup was professional. The younger students seemed a bit overwhelmed at first, but picked up a lot, also from their more experienced peers. Our team ensured that everyone felt heard, encouraged, and inspired. The extensive feedback sessions were new for me, and rewarding.

How did you experience cooperation?
Enthusiasm ran high. The students bought into the story and were thrilled about creating a unique film. Cross-departmental cooperation was flawless, teamwork outstanding. My colleagues’ support and professionalism inspired me to push the students and to let them excel. 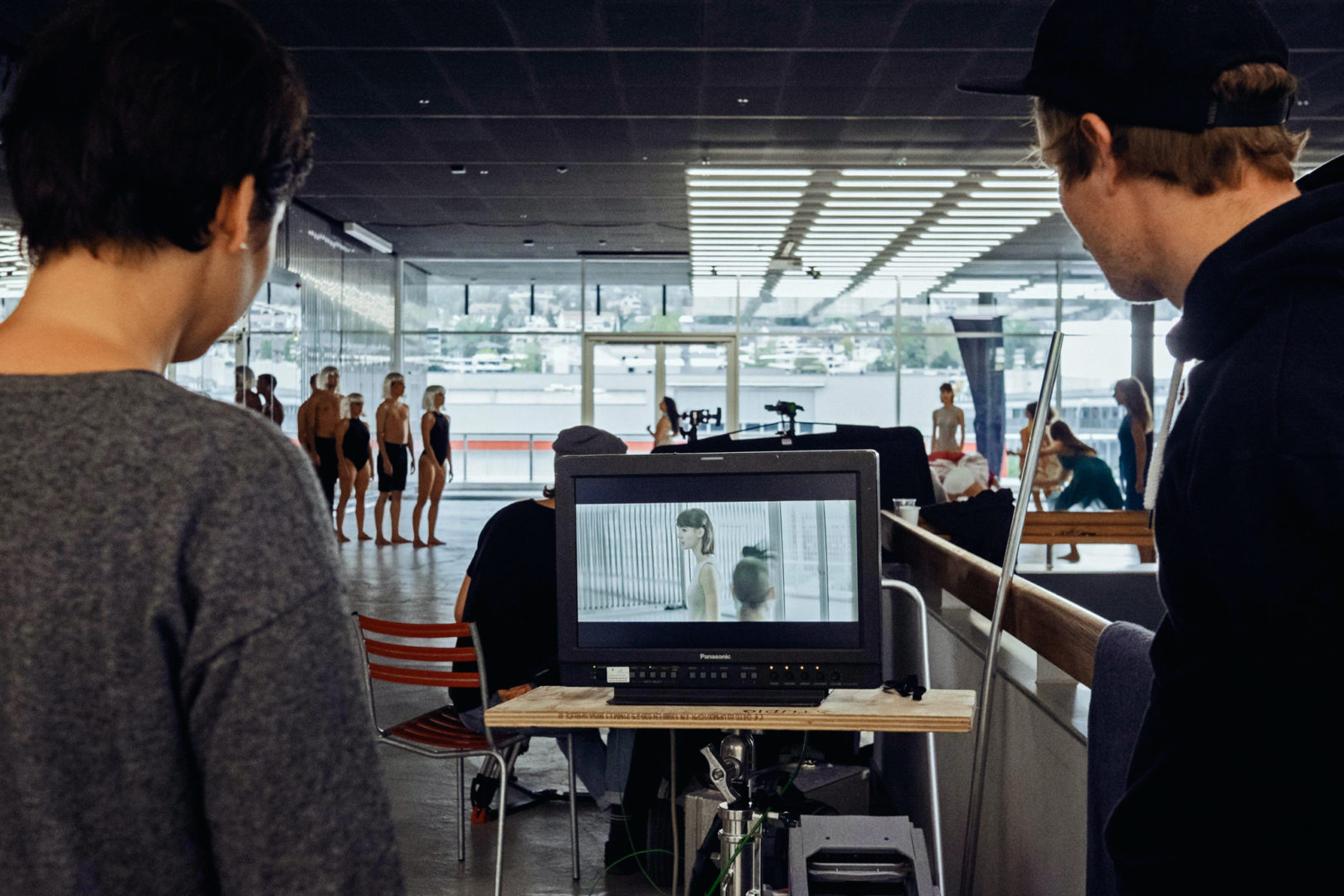 Shooting of the film at ZHdK.

What is special about the course «Tanz mit der Kamera»?
Unlike other productions, we start with the composers. They get the script first. We do this in spring. During summer, they come up with themes and ideas. In September, I meet the dancers from the BA Contemporary Dance. It’s their first year, and they don’t know each other that well yet. I let them read the script, and we discuss the story. This usually being their first experience with film, I explain the difference between dancing in a film and on stage. We discuss dance films. especially the acting. Casting takes very long, and the dancers learn to act as the choreography takes shape. While we develop the movements, the composers get to better understand the story’s visual direction. During choreography and composition, Andreas’s Camera Work students start working on locations, frames, visual style. They also attend rehearsals and help create the choreography, the «stage» being whatever frame we choose. This allows the dancers to get used to the cameras. Some of the music is already ready during the shoot.

How different is a dance film from a feature or documentary?
In a dance film, as in a dance performance, we perceive the story through movements, pictures, music, and sound. This requires great precision and careful choreographic and cinematographic preparation. There is usually little improvisation. I find Hollywood film director and dance choreographer Busby Berkley very inspiring: He always knew how to edit his films before shooting. It’s a good skill to develop. Because even if technology permits spontaneity, precision is refreshing.

Laura Kaehr is a Ticino-born author, director and choreographer. She has a past as a professional dancer and graduated from ZHdK Master in Transdisciplinary Studies and UCLA screenwriting class.

Judith Hunger (judith.hunger@zhdk.ch) is responsible for communications at the Department of Performing Arts and Film.
Teile diesen Beitrag: